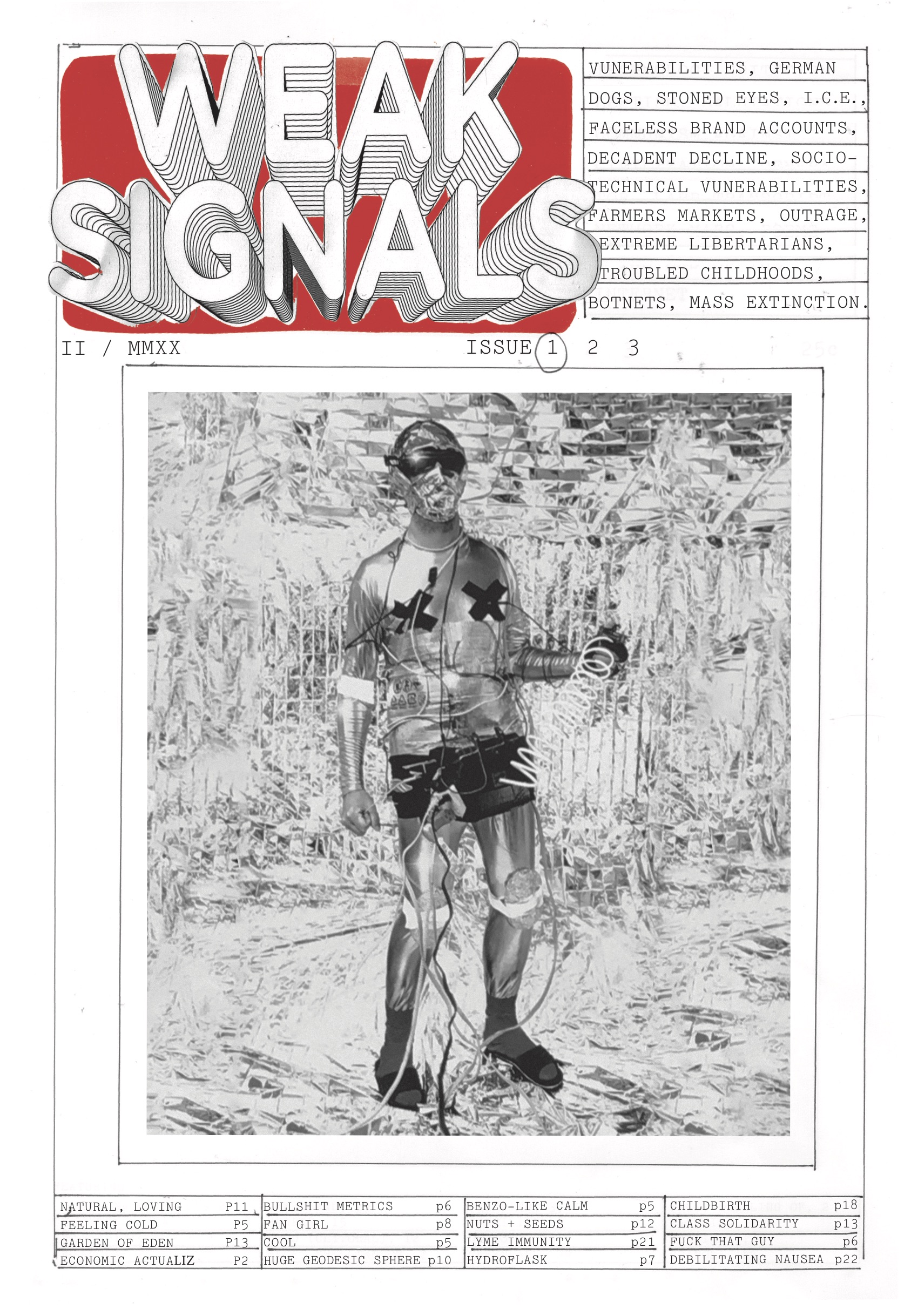 In the wake of Rhizome’s three-year project on net art history, Net Art Anthology, we we felt the need for a programmatic shift that would allow us to tackle contemporary issues head on. We decided to structure our 2019–2020 program around research themes, which would be explored across a range of activities. Info-Wars was the first of these; Money as Medium is up next.

Info-Wars, which was curated by Aria Dean and supported by Seth Stolbun and the Stolbun Collection, was a several-month inquiry into online political radicalization and new forms of political thought and community developing online. Activities included dinner salons, online publishing, events, commissions, and the publication Weak Signals, which was designed and supported by Wieden + Kennedy, and launched tonight at the New Museum. Weak Signals is now available on the Rhizome Shopify.

Info-Wars included a series of informal dinners hosted by Seth Stolbun and Aria Dean, where a rotating cast of characters including internet researchers, artists, and journalists held wide-ranging conversations on topics relating to the theme. Between dinners, links to PDFs were exchanged, and the ideas found their way into events programs and into the Weak Signals publication.

Curated by Aria Dean and Lauren Studebaker, this event took place in 2018, before the Info-Wars program began, but it served as a jumping off point that would frame the research season as a whole. It took on the ways in which new regimes of truth were being cemented on online platforms, raising questions about how the internet’s infrastructure itself impacts these processes and how it might be harnessed for something other than “red-pilling,” or the indoctrination of users into the views of the violent alt-right.

“After the End of History”
Saturday October 5, 2019
New Museum

Building on his research for his landmark 2018 publication Politigram & the Post-left, artist Joshua Citarella conducted a series of interviews with Gen Z users who post radical political content on social media, as part of a forthcoming Rhizome commission. This event brought together three of the most sophisticated figures he has encountered through this research, all of whom are associated with the fragmented online communities known as “post–Left.”

For the event, each participant was asked to prepare micro-lectures describing possible and preferred scenarios for politics and society over the next twenty-five years, and to comment on the role of internet culture in shaping future outcomes.

An edited recording of this event was released on Rhizome’s podcast, sometimes called  Rhizome Raw and sometimes Rhizome Rare.

This screening featured Ed Fornieles’s Cel (2019) and clips from the accompanying Cel-Debrief, followed by a conversation with the artist moderated by Rhizome’s Aria Dean. With Cel, Fornieles aimed to explore the ideologies that influence aggressive expressions of masculinity and to provide an alternative, effective framework for their dismantling. It documented a seventy-two-hour immersive role-play performance in which ten participants navigated a fictional, embodied version of extremist online communities which are largely populated by white men.

To mark the conclusion of Info-Wars, Rhizome held a publication launch at the New Museum for the Weak Signals publication, which drew its name from a technique used for strategic foresight and threatcasting, in which fringe phenomena are interpreted as early indicator of a world to come.

At the event, Aria Dean and Rhizome Artistic Director Michael Connor gave an informal lecture summarizing the season’s research. Salon participants Zoe Dubno and Dean Kissick read their contributions to the publication, and a reading of jeans based on Jeffery Epstein’s Black Book was conducted. The jeans were created for Weak Signals by Chris Habib (Visitor Design).

20 Interviews is an in depth survey of young political spaces online featuring interviews with the accounts that have shocked or inspired the artist over the last few years. The work is currently available as a book on Citarella’s Patreon.

As part of this commission, Citarella also worked with Rhizome to organize the event “After the End of History,” and a related publishing program featuring leading political thinkers from Gen Z, each of whom were asked to contribute a text exploring their vision for the next 25 years.

zoe4revolution, “Communism Against Civilization or Eco-Fascism”

DZ Rowan and Cass Frugé, Excerpts from “Our Problems with Leftism

Several episodes of Rhizome’s podcast, which is variously titled Raw or Rare, covered aspects of Joshua Citarella’s research. These are available on iTunes or Soundcloud.

Baby Faith is a young and naïve web-based chat bot struggling to learn how to identify human emotion. Its difficulties in identifying emotion online mirror the challenges of emotionally driven disinformation campaigns, where, for example, fake claims spark emotional responses. Baby Faith suggests that online emotions should not be taken at face value—by chat bots or humans—and that applying a critical lens to interactions can build societal resistance against disinformation.

With Chorus, Constant Dullaart adapted a monologue from "The Picture of Dorian Gray" as a musical sonnet that evokes the exhaustion in dealing with social media disinformation and propaganda. A crowdsourced chorus singing the lyrics accompanies the poem.

Visitor’s past work has often used strategies of appropriation to raise questions about power and ethics, and how they shape culture. Thes handmade pants bear copies of entries from Epstein’s black book, encoding its elite networks into a punk-style garment.

Commisions awarded as part of Info-Wars also include forthcoming projects by Dena Yago, Sam Wilken, and others.

Rhizome’s Info-Wars research season concluded with this newsprint publication featuring artists and writers who grapple with the near future of political radicalization, community, and climate. The publication drew its name from a technique used for strategic foresight and threat-casting, in which fringe phenomena are interpreted as early indicators of the world to come. Taking this technique as a jumping-off point, contributing artists and writers fashioned speculative narratives and research from the edges of network culture.

Now available on Rhizome’s Shopify, Weak Signals was edited by Aria Dean and designed by Wieden+Kennedy.