Excerpts from “Our Problems with Leftism”
By D.Z. Rowan and Cass Frugé 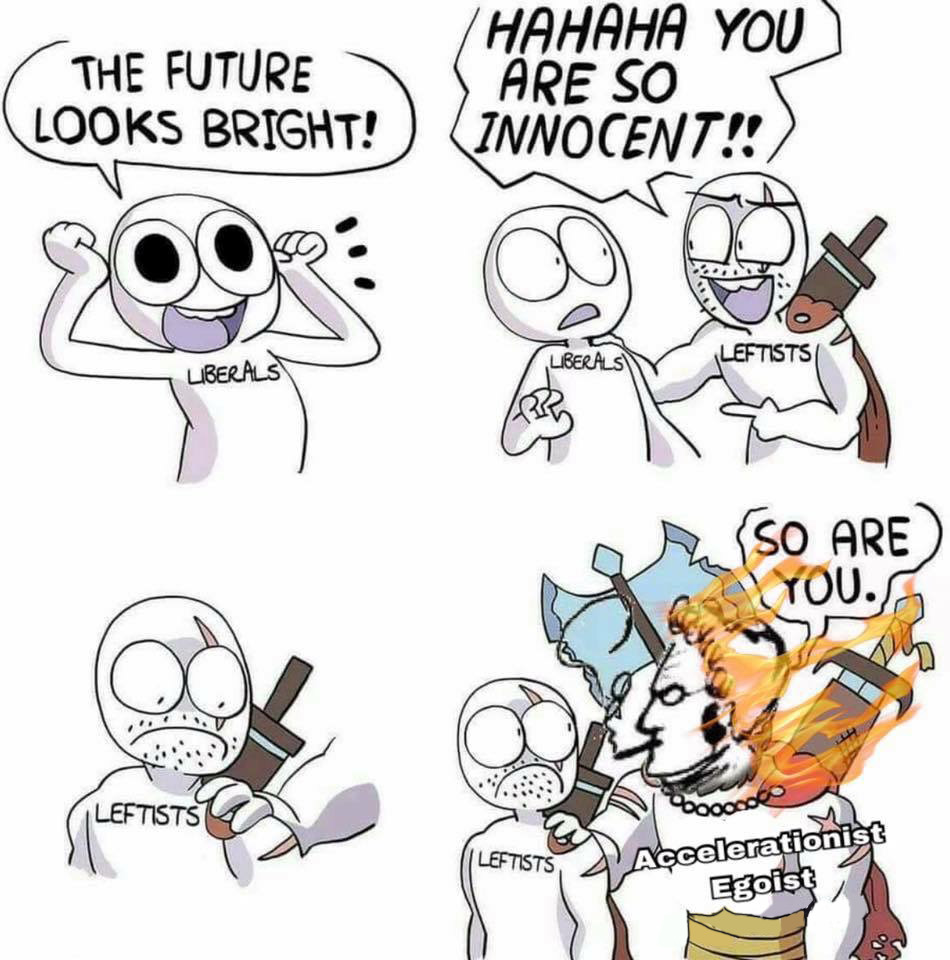 For the October 5 event “After the End of History,” organized with artist Joshua Citarella as part of his forthcoming Rhizome commission, “zoomers” from several online political communities associated with the ”Post-Left” were invited to describe their vision for the next 25 years, and the internet’s role in this. This text is by D.Z Rowan and Casse Frugé, who align themselves with a network of ideas known as U/acc (unconditional accelerationism), distinguished from traditional leftist perspectives. A previous article in this series represented a “leftcom” point of view. Most recently we published a text by zoe4revolution, who identifies as anti-civ/egoist Communist.

Published as part of the Info-Wars program thread, which explores political radicalization online.

Capital now turns on itself and begins the process of implosion. Capital’s transgressive tendency will no longer be transgressive once there is nothing left to transgress. Whether we are in a perpetual state of acceleration is unclear and unimportant. We must embrace this destructive element, which exists both in transgression and implosion, as part of Capital’s unending attempt to expand. Today there is nothing more we can do.

By focusing on queer validity, the structural factors which contribute to the rise of queer struggle are ignored. Until that can be countered, queerness will continue to lose its revolutionary quality and assimilate into capitalism. Liberal queerness conveniently forgets transmasculine struggle. There is a clear parallel between the slow-growing “acceptance” of transmasculine people and the fear of AI. To the cis male identity, AI represents the fear that their perceived subordinates could become equal to them and therefore acquire the ability to dominate and replace them. In the eyes of cis men, transmasculine people embody the fear that the “subhuman other,” the female, could overthrow them by becoming just like them, and thus force them to recognize the personhood of women. On the other hand, transfemme people represent the cis male fear that they are the ones being subordinated by other men, but more specifically, they represent cis men’s own suppressed femininity. Non-binary identities such as agender represent the cis male fear of their eventual uselessness, and the uselessness of their gender binary, due to the acceleration of technocapital. Third or agender individuals force cis men to confront the very dependence of gender on the system they benefit from and therefore its impending irrelevance after the system is abolished. These fears are precisely the reasoning behind the continued violent oppression of women, the repression of men, and the continuation of the institution of gender. These transgressions should be embraced and accelerated by transgender people as our very existence threatens cis male identity.

Recent decades have seen a recuperation of radical social justice movements. Today, tokenism has reduced issues of women’s, POC, and queer liberation into a symbol of marketability. Sexism, racism, homophobia, transphobia, etc. are widespread relational hierarchies which are deeply rooted in the subordination and division of labor. They transcend a subject-oriented approach because they are societal, not moral, issues. Overcoming these types of oppression is a matter of liberation, not justice, and to liberate ourselves from oppression we have to liberate ourselves from the very system which makes our oppression so convenient: capitalism.

Why is it that women are confined to vulgar slavery and men to wage slavery? A strictly Marxist analysis of gender fails to describe that women were still othered before commodity production.

Whether we date this process as occuring shortly before the rise of commodity society or at the very beginning, the female body has been mechanized. With this shift, the female body was dehumanized and valued insofar as she can perform mechanic qualities through reproductive and domestic labor. While reproduction isn’t inherently sexist, the easily exploitative nature of reproduction would lead us to conclude that mother earth isn’t much of a feminist. The burden of childbirth creates a vulnerability to patriarchy and provides the excuse to further control people assigned female at birth.

Young people live in a state of relative insecurity compared to previous generations. This requires a greater amount of time and energy dedicated to staying organized, so much so that the digital landscape has become a quasi-society. The internet is turning into a separate sphere itself.

The lines between cyberspace and the physical world are blurred. The internet is becoming an influence on national television, politics, and event consciousness (all relating to each other as a primitive hyperreality, a hyperreality which the internet has deterritorialized from). This internet gift economy has created an expectation of itself within those who make up the network and this new population is growing. The internet is meshing with the physical world. It’s integrating itself into both objects and people. The smartphone, a computer carried around at all times by everyone, might as well be an arm or leg. We are quickly becoming one with the internet: reality and cyberreality are becoming the same. The free flow of information, information that brings groups of people together, is what defines the internet. The internet is exploited by the bourgeois and in constant conflict with them. The more the internet integrates itself into the physical world, the more it will come into conflict with capital. The bourgeois are always trying to commodify and kill areas of the internet, but the internet continues to replicate itself. While some may argue that cyberspace is a structural phenomenon, created by and for capitalism; so is the proletariat. The proletariat is made up of people and the wired is made up of people as well.

We can’t predict how these developments will impact the communist movement, that is not our purpose nor is our purpose to direct struggles in relation to technological development. However, the advent of the internet is changing our perception of reality itself for better or worse. The conflict between those who use the internet and those who own it will likely become major grounds for class struggle. The internet has become a structural reality, a necessary cog in the capitalist machine; it can’t be resisted. And while the contradiction exists the internet provides a medium for change that we have never seen before, not just due to its capabilities of spreading consciousness and connecting people on a global scale, but it in and of itself offers an example of a different system. As the internet integrates itself further into the physical world, will the line between sharing files and sharing food be blurred? The internet is fostering a scale of communal relations never before seen in the developed world and the vast majority of the participants don’t even know it. The bourgeois will certainly resist this, they already are, from petty upper middle class campaigns to limit screen time to stricter copyright laws.

This will become one of the greatest class conflicts of the century. Cyberspace introduces a new frontier of struggle. It is this struggle that must be accelerated for better or for worse; cyberreality will become the dominant mode of consciousness anyway.

We are by no means suggesting that the internet will necessarily liberate us or even provide a capacity to, because while the internet (and cyberspace in general) provides a stronghold, it also accelerates new methods of control. Data harvesting and individual tracking are native utilities of the internet that corporations and governments are all too happy to exploit. Those in power will continue to push for greater control over this space. The rules have changed for better or worse and this will now influence the development of proletarian struggle. It is of the utmost importance that communists educate themselves on these changing conditions, particularly, the transgressive tendencies which attempt to accelerate struggles which arise as a result of our changing society. Can the internet’s users resist and overcome efforts to neutralize it? We can’t be sure, but we can certainly be ready.