Communism Against Civilization or Eco-Fascism
By zoe4revolution 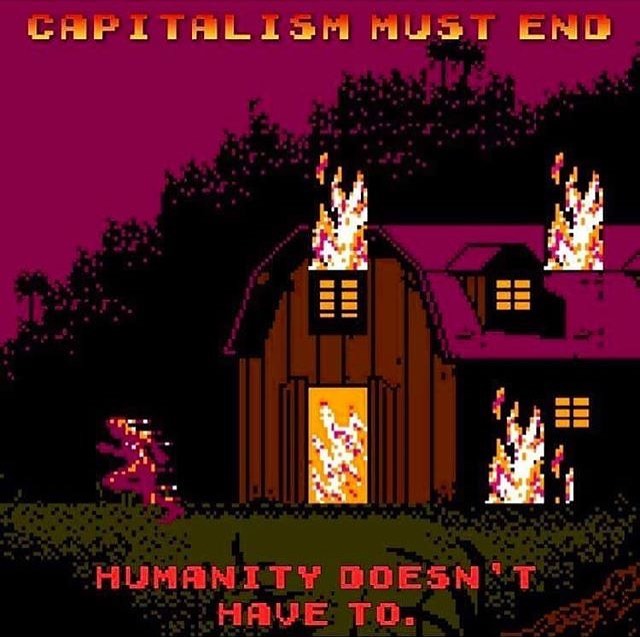 For the October 5 event “After the End of History,” organized with artist Joshua Citarella as part of his forthcoming Rhizome commission, “zoomers” from several online political communities associated with the ”Post-Left” were invited to describe their vision for the next 25 years, and the internet’s role in this. This text is by zoe4revolution, who identifies as anti-civ/egoist Communist. A previous article in this series represented a “leftcom” point of view.

Published as part of the Info-Wars program thread, which explores new forms of political thought that are emerging online.

Capitalism is incompatible with ecological sustainability. The rise of the capitalist mode of production was made possible through a brutal process of global colonization and ecological devastation which continues to this day, landing us in the middle of the largest mass extinction in sixty million years. Now, the proletariat must overthrow the ruling class and create a classless society in order to prevent Capital from devouring all life.

Capital doesn’t only destroy life by burning rainforests and poisoning water, or through colonial genocide, but also by squeezing the creative pleasure and passion from production. There is no need for a state or specialization of labor in societies that produce what they needed to survive with materials directly from the natural environment around them by hunting and gathering in free association with those they produce with, while traveling in small familial bands. Historically, it was only with the rise of city states ruled by priest-kings and fed by masses of enslaved farmers that productive labor took on a generally alienating character. Specialization of labor, division into social classes, and a centralized state power remain the defining attributes of what we call “Civilization.”

Capitalist society has totalized and generalized alienation. The proletarians are entirely separated from the products of their labor and from the means of production. I believe it’s only because we are alienated from our world and ourselves that we are able to bring ourselves as a society to destroy the natural world. They can only end their alienation by seizing control of the means of production and abolishing class society. That means revolution, and I believe that’s the only way forward for humanity.

The necessity of proletarian revolution is made especially clear by the current climate crisis and the widening gap between the rich and the poor. Droughts and extreme weather linked to climate change have already put millions around the globe at risk of hunger, and millions have been displaced. As desertification intensifies and the climate worsens in the coming decades, there is going to be a migrant crisis that will make the current predicament seem like child’s play. Those living in the poorest nations near the equator are going to be the most heavily affected initially.

The capitalist mode of production is incapable of dealing with this coming crisis. Right now, enough food is produced on the planet to feed twelve billion people, but out of the 7.7 billion people in the world today, 815 million are chronically undernourished. When the planet’s capacity for food production rapidly and drastically falls, the super-rich are not going to provide food for those who need it, and huge numbers of people will die. If the migrants aren’t incarcerated in concentration camps, as I’m sure many will be, they will join the growing ranks of proletarians in first world nations who have no access to the social safety net of old or stable job opportunities. As conditions worsen, the capitalist class will, through its media and the state, increasingly blame the poor conditions on the marginalized. Climate change will be attributed to the working class being wasteful or foreigners having too many children, and this will be used as justification for policies which will cut down on the living standards of the people and increase the criminalization of the marginalized. Prison populations will swell, and law enforcement will become more militarized than it already is. The future for capitalism, if there will be a future for it at all, is eco-fascism. It’s not a question of if this will lead to genocide, but of when.

A crisis is looming; just as capitalism is destroying the earth, it is making it increasingly difficult for the proletarians whose labor it relies on to reproduce themselves through work. This makes the imperative of finding a new way of life ever more pressing. Increasingly, the norm for young people is to be under-employed or precariously employed, and the working day on average is getting longer while pay isn’t rising. Depression and anxiety are more common in the US and UK than ever, especially among young people. Mental illness is portrayed by society as being caused by individual psychological issues rather than by social conditions, but it isn’t only that: it is a social problem arising from the social conditions of present society which young people are finding increasingly isolating and intolerable.

As oil prices rise, the bourgeoisie will realize that they can’t keep on using oil to fuel their economy, and they will turn to other means, including so-called “green energy.” I think it’s vital to point out that a “Green New Deal” can’t make capitalism ecologically sustainable. To produce enough solar panels and wind turbines to reach the goals set out by Alexandria Ocasio-Cortez it may be necessary to increase the mining of some rare earth metals more than twelve times over; other minerals such as cobalt will also see heavily increased demand. Already this mining poisons water sources, accelerates deforestation, relies heavily on child labor in Congo, and reduces whole areas to toxic wastelands. Instead of maintaining our current energy use (and inevitably increasing it to fuel the endless expansion needed by the capitalist economy), what the earth needs, and what the people who live in the areas that will be devastated need, is a reduction of energy use. This will only be made possible if the people take the means of production under their own conscious control rather than producing ever greater and greater exchange values. 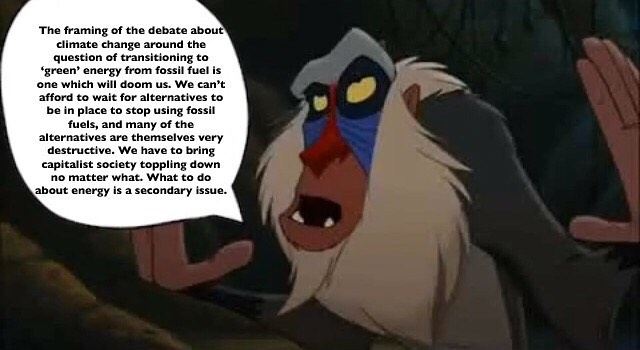 The way to counter the division and xenophobia which the ruling class always have and most definitely will use to weaken the fighting strength of the workers is with solidarity. The white proletariat in the United States must recognize that their interests are aligned with those of the racially marginalized and act in cooperation with them to destroy the settler colonial state in which we live. The revolutionary movement must overcome the racial, gendered, and sexual oppression that divides the proletariat if it is to win, and in the process of winning it will destroy gendered and racial categorization forever, as it will do away with all the alienating roles of “Civilized” society.

The task before us won’t be an easy one. There is a prevailing sense that what we’re living now can’t go on and at the same time that this society is immortal. As soon as the people refuse to continue to work, and instead move to sabotage or take over the productive forces of society, the military powers of the capitalists will be significantly reduced. The greatest weakness of the proletariat is that the people don’t know their own strength: but as soon as they begin to act for themselves collectively, they will begin to feel that their own social power knows no limits. Even now, in the US, people under 30 respond more positively to the word socialism than they do to capitalism, but most are enamored with reformist efforts that don’t transcend the barriers of present society.

As the climate disaster accelerates, the oppressed can build solidarity, increase their own chances of survival, and simultaneously become more experienced in the use of their autonomous power through the creation of networks of mutual aid. Collective networks for harm reduction, to address food insecurity, and provide medical assistance will hopefully be accompanied by the growth of autonomous organizations for the development and synthesization of revolutionary theory, for political mobilization, the dissemination of propaganda, and for collective self-defense. This will certainly not go ignored by the ruling class, and will be met with repression and attempts at recuperation. The proletariat will have to be wary and refuse any compromise with their oppressors. In their struggles to support one another in opposition to the ruling order, the proletarians will become ever more aware of their own strength and that anything short of taking over the world to destroy Civilization would amount to total defeat. I hope that they will succeed at that task, because that’s the only way our generation will have a future full of life.