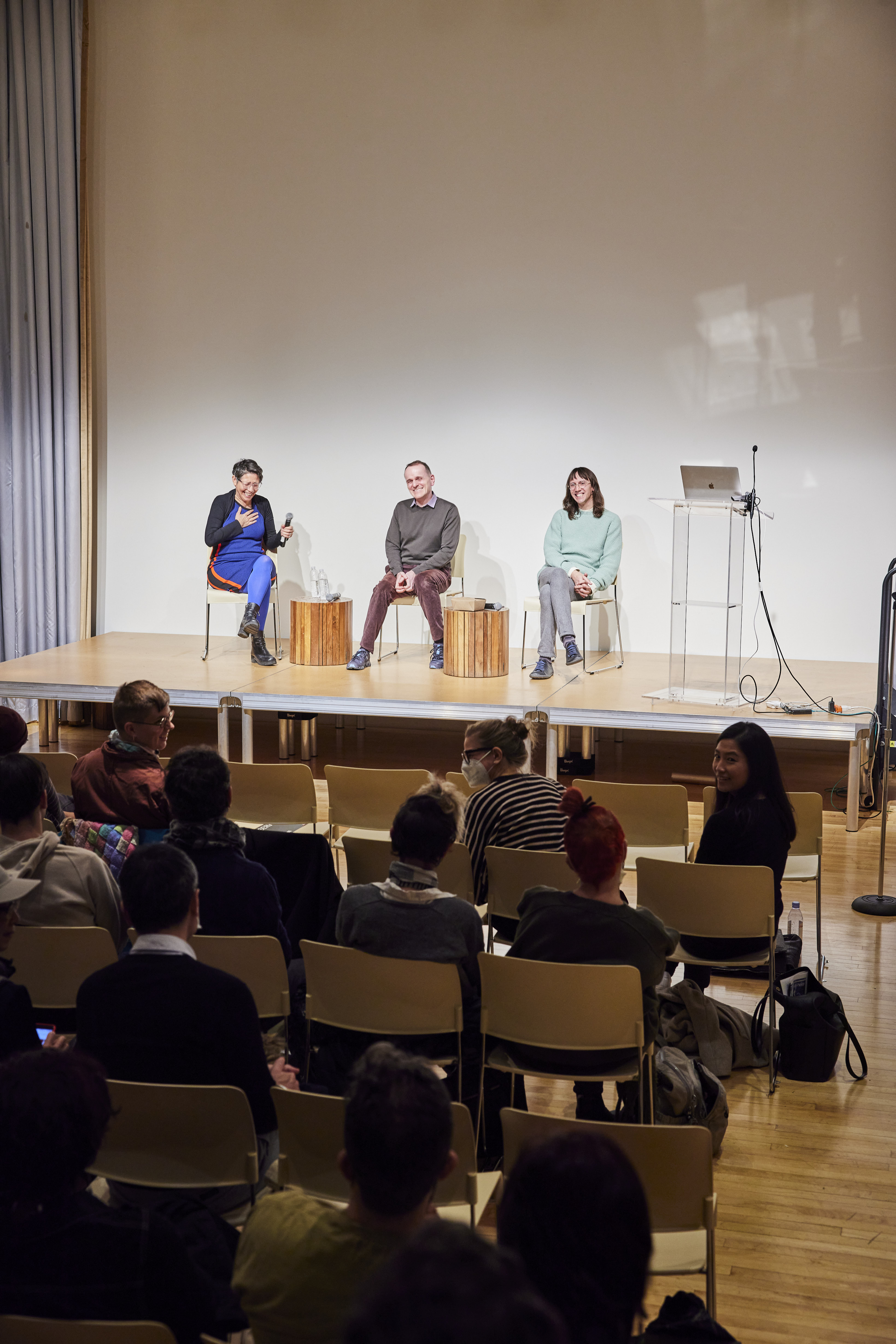 Skawennati, Dragan Espenschied, and Mikhel Proulx enjoy a laugh after an audience member verifies that they were able to watch “Peacemaker Returns” in the bathroom at the New Museum during A CyberPowWow panel discussion, December 10 2022. Photo: Cameron Kelly McKleod. Courtesy of Rhizome.

Video documentation from the CyberPowWow panel discussion is available online.

On December 10, 2022 at 3pm, Rhizome hosted a panel discussion at the New Museum, featuring artist Skawennati, scholar Mikhel Proulx, and Rhizome’s Preservation Director, Dragan Espenschied. Launched in 1997 by the Nation to Nation Collective (Skawennati, Ryan Rice, Eric Robertson) CyberPowWow was one of the first major online exhibitions. The panel accompanied Rhizome Presents: CyberPowWow, a one-day pop up exhibition, in the New Museum Sky Room, where members of the public could interact with CyberPowWow in legacy computer environments, and browse ephemera from the Indigenous Digital Art Archive (which featured the original CyberPowWow floppy and zip discs from 1994 💾). 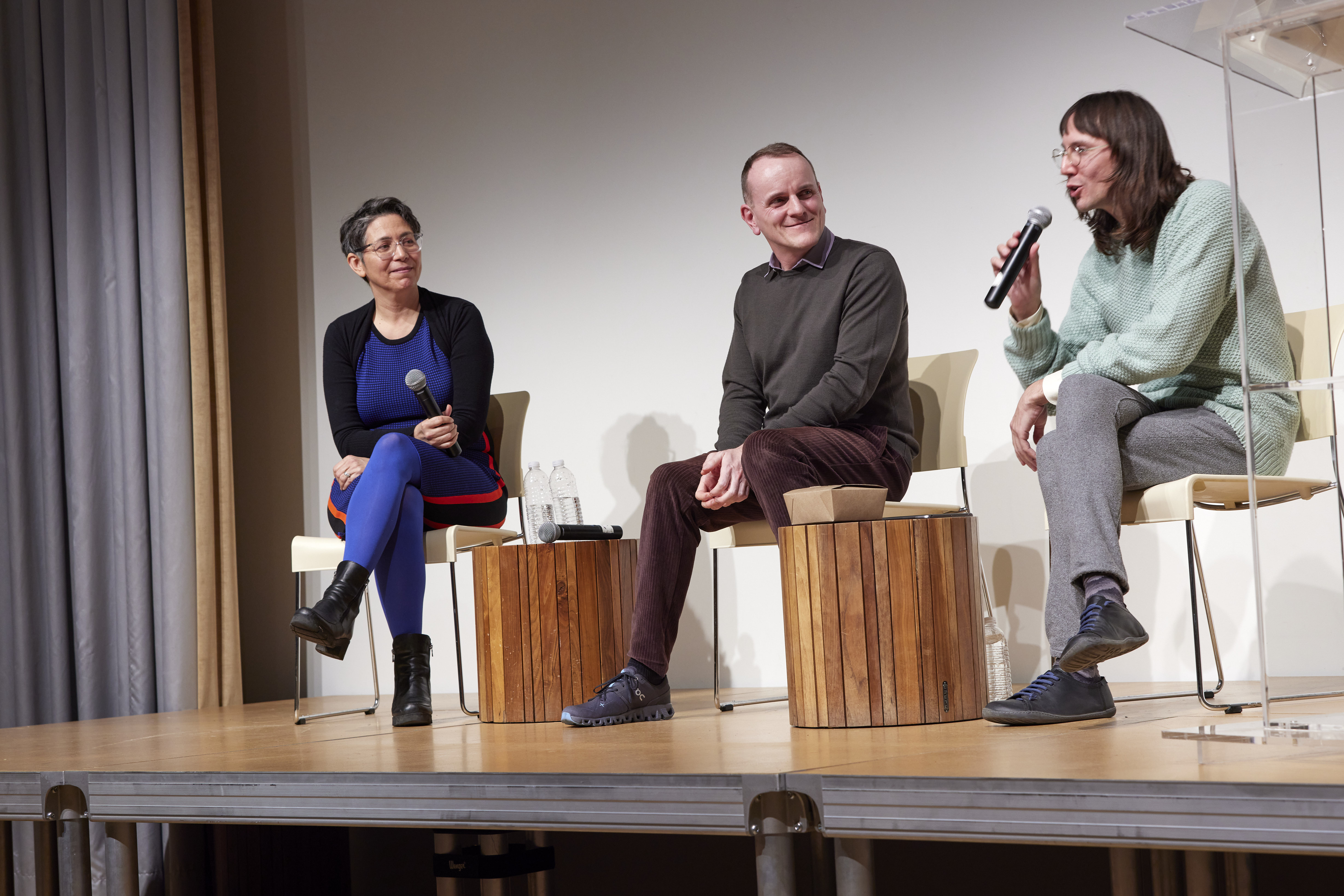 Mikhel Proulx began by giving us an overview of CyberPowWow—Proulx illustrated the “idiosyncratic” interface design integral to CyberPowWow with work by Archer Pechawis (a participating artist and co-curator of CyberPowWow), and touched on the troubling history of the net being tied to eurocentric perspectives and the language of conquest, misappropriated by settler technologists (examples mentioned included: the web server software “Apache,” the “Inktomi” search engine, and John McAfee’s multimedia chat software “PowWow”). Mikhel argued that despite the prevailing racist mischaracterization of Indigenous people as technologically inept and their exclusion from the overall narrative of net art history, Indigenous artists have occupied central roles in the cultural history of the web. 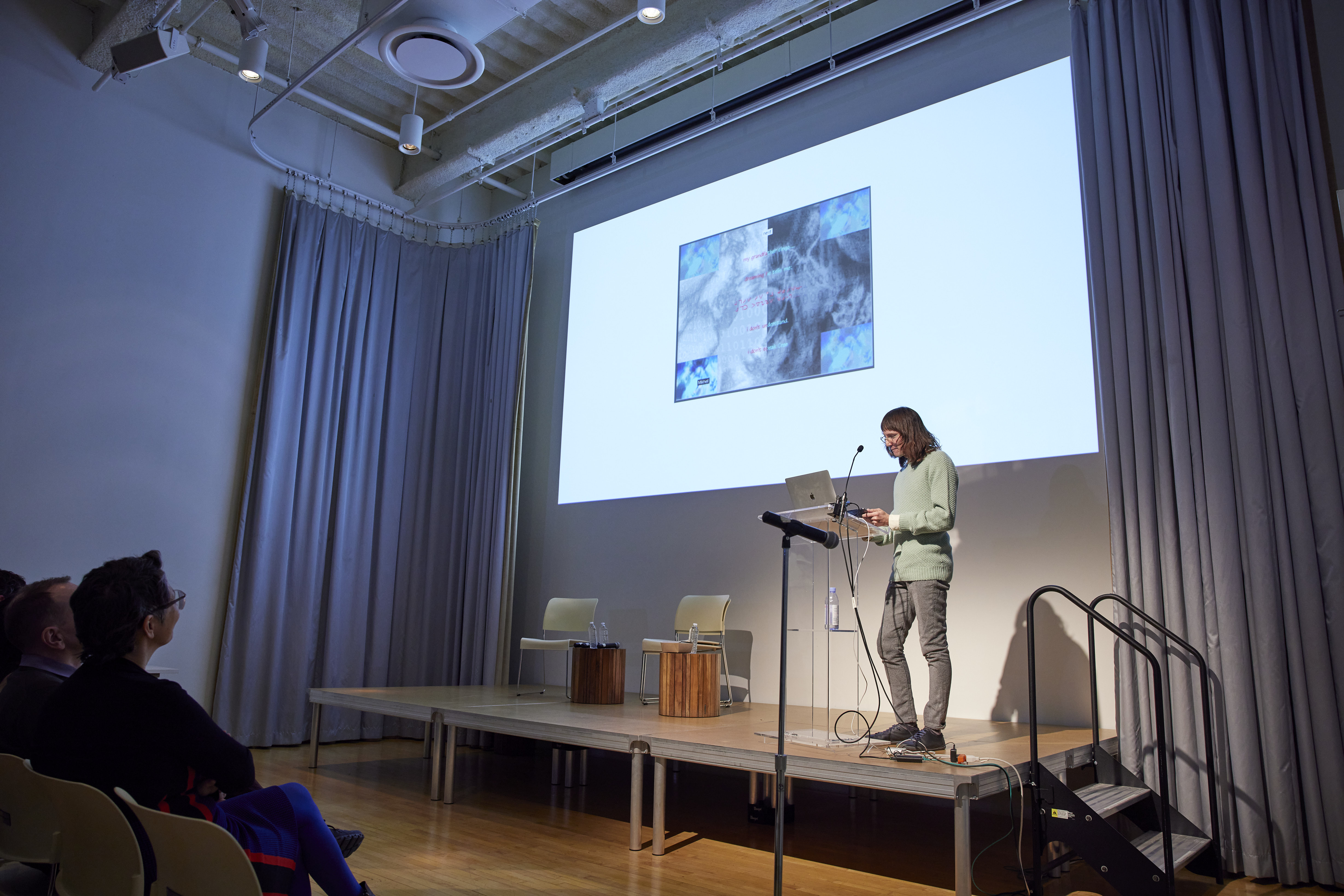 Skawennati spoke about being Indigenous in cyberspace and her work as co-founder of AbTec, an Aboriginally determined research-creation network and daphne—an Indigenous artist-run center in Montreal. She recalled her foray into Second Life (first introduced to her by game designer and researcher Celia Pearce) which set the stage for her nine-part machinima series, Time TravellerTM, a humorous exploration of Indigenous futurism in the year 2121. She also presented xox’s homage to Moriko Mori, and highlighted student projects from Skins, AbTec’s machinima and character design workshops for Kahnawake youth. Skawennati has a very fun website (sound on)! 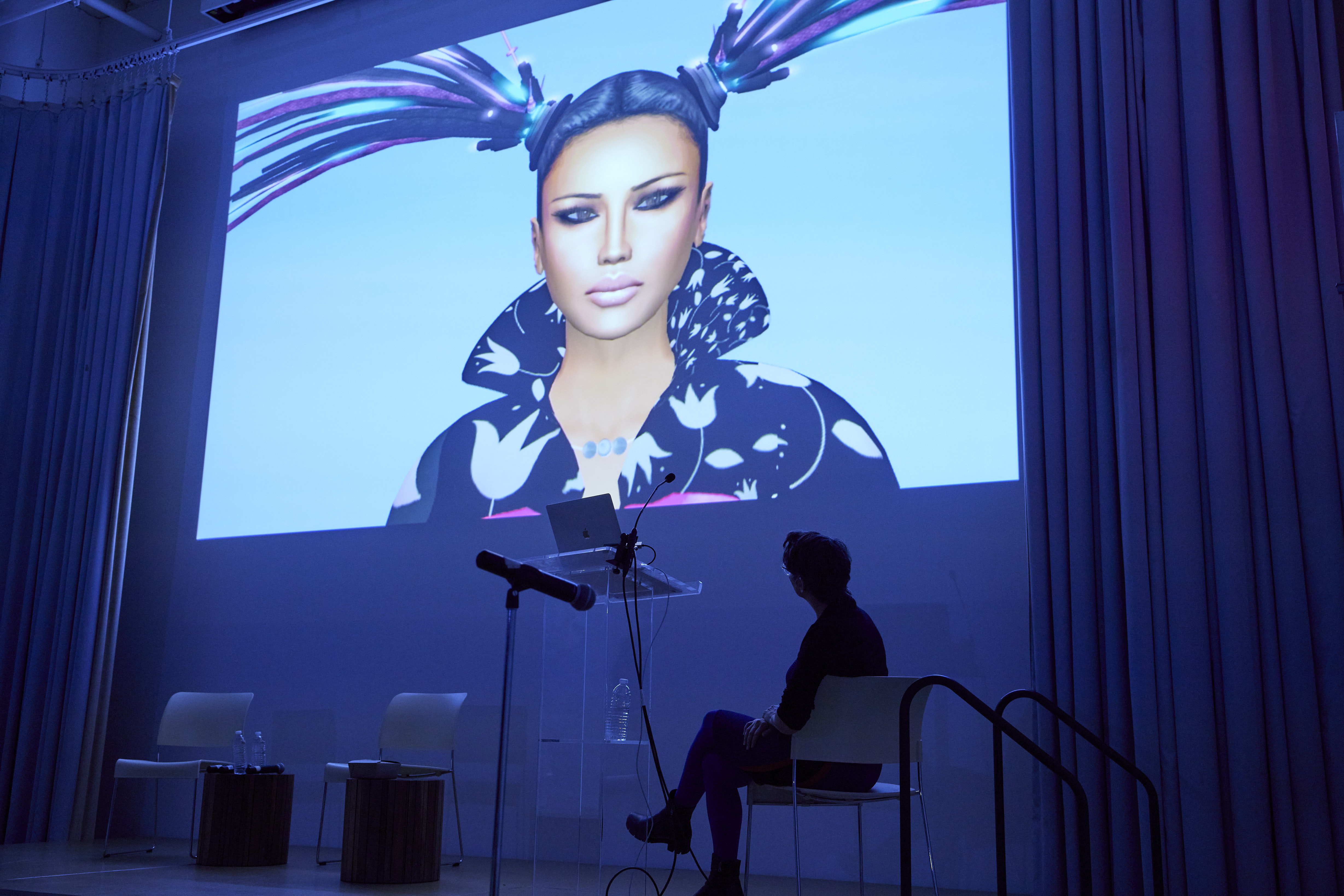 Skawennati having a moment with her avatar, xox at the New Museum during A CyberPowWow Panel Discussion, December 10, 2022. Photo:Cameron Kelly McLeod. Courtesy of Rhizome.

Dragan Espenschied provided important context and a behind-the-scenes look at Rhizome’s preservation strategy for CyberPowWow, even revealing that he installed a pirated version of Windows XP from “somewhere.” Dragan noted Rhizome’s preservation of CyberPowWow was made possible by former Rhizome Software Curator Lyndsey Jane Moulds, who ran her own Palace Server as a teen, and researcher Yuhsien Chen, who created a map of the connections between over one hundred rooms in CyberPowWow! 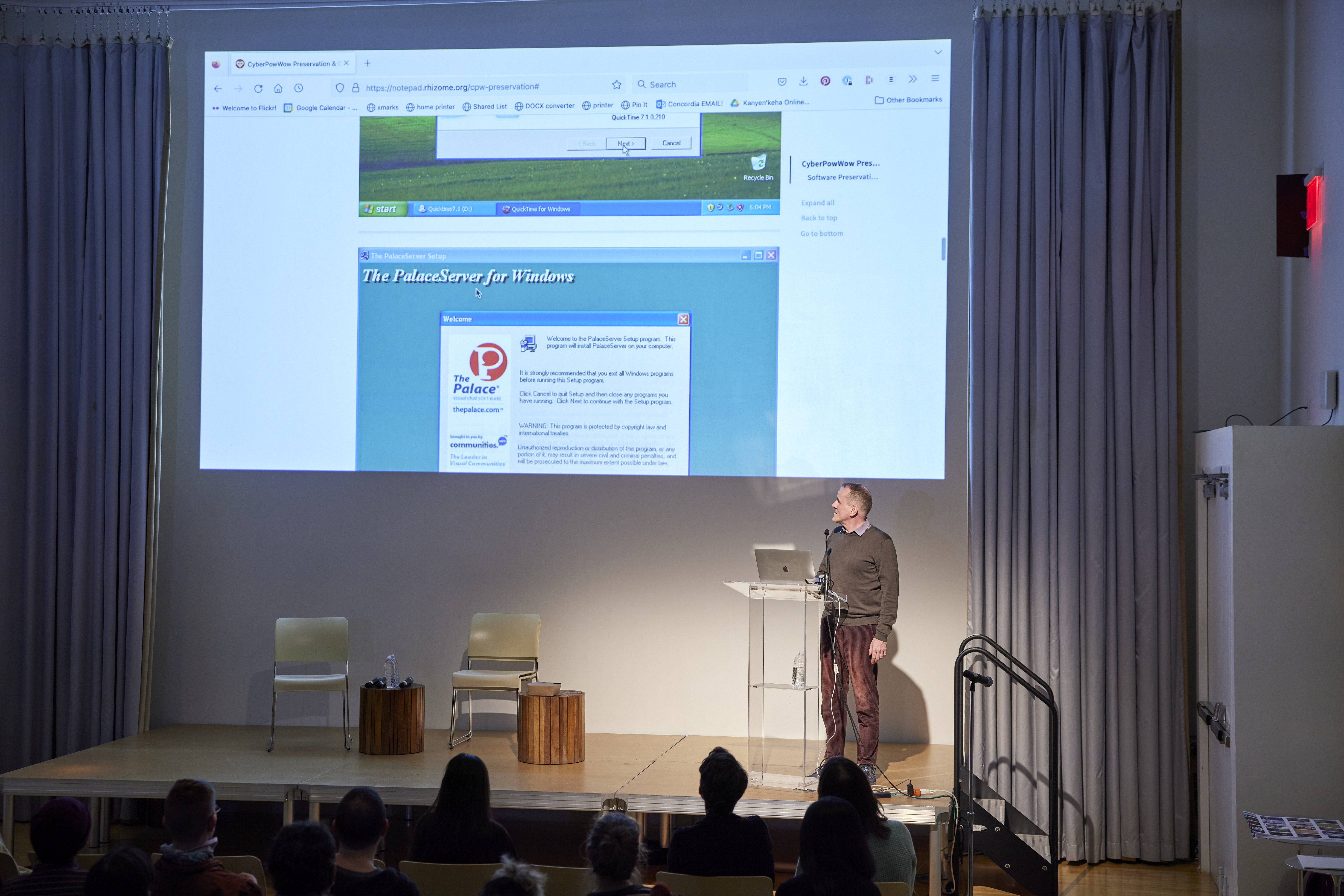 Dragan Espenschied illustrates how to install the PalaceServer at the New Museum during A CyberPowWow Panel Discussion, December 10, 2022. Image courtesy of Cameron Kelly McLeod and Rhizome.

The virtual and IRL audience was invited to ask questions following the discussion; we learned about the Met’s exhibition on Indigineous Futurism (open until January 3, 2023!) which features Skawennati’s work, as well as Apsáalooke multimedia artist Wendy Red Star. Important considerations regarding chat moderation were raised (“moderation wasn’t even a thing yet in the 90s”—Skawennati). Much to our dismay, there is not (yet) a book on Skawennati’s life and work… Perhaps the greatest lesson we learned from CyberPowWow is to document, record, photograph, preserve, archive your memories (digital and IRL)— they are precious 🫶, and could be quite valuable someday! 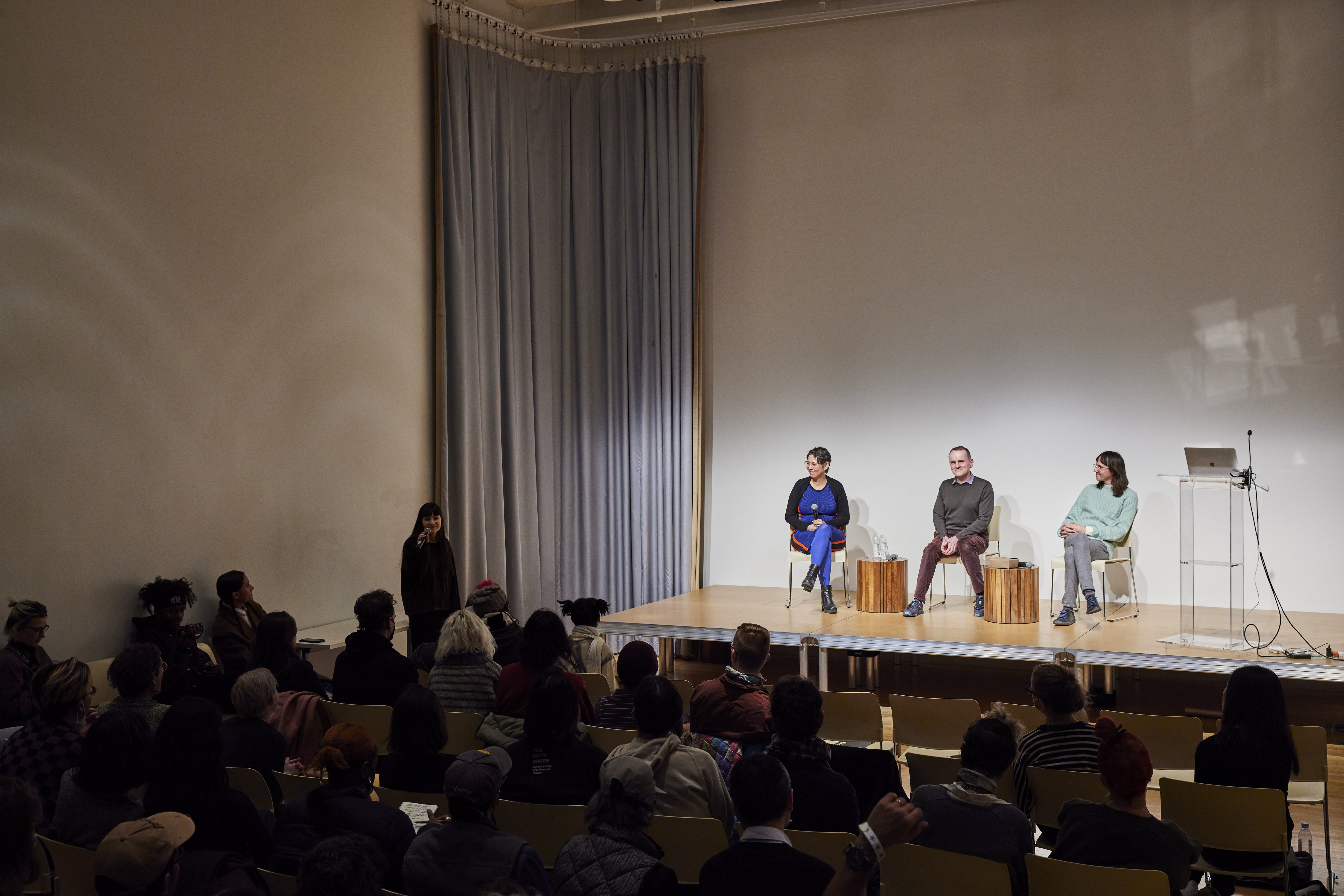