Mapping the Social
By Louis Doulas 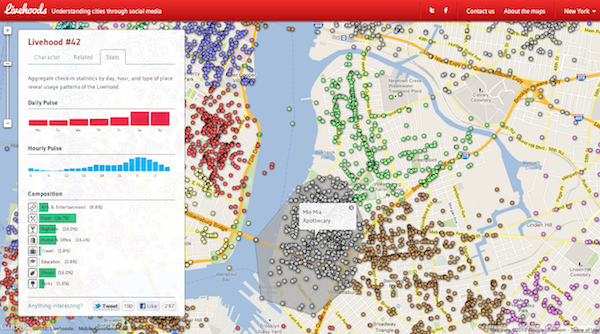 The Internet, specifically social media, is often perpetuated as being a new kind of ‘revolution celebrity’ and indeed to some point its played a hefty distributive role in accelerating the 2011 Egyptian Revolution, Occupy and even the SOPA protests to name but a recent few. Yet, it simultaneously is this other exploitative entity, capitalizing on our movement through online space and constantly collecting data with often vague, ill-defined intentions.  Can social media’s two dynamic roles—both as a constructive social platform for anti-government efforts and a data aggregating system—be synthesized into a critical and valuable commons? Can personal user data collection be used for more than advertising and increased commodification?

Techno-sociologist, Zeynep Tufekci proposes that today, connection and friendship are moving from the ‘ascribed ties’ of inherited local relationships consisting of one’s neighborhood friends, family, etc. to ‘achieved ties’ or relationships located based on the shared affinities of people ‘with whom you interact using multiple means of communication’.  What can such shifts reveal about territorial and even regional interaction? Of neighborhoods, boroughs and its socio-economic behaviors? How can geography be re-defined?

The Livehood Research Project from the School of Computer Science at Carnegie Mellon University is potentially one example of how data collection can be used in a constructive, illuminating way, by demonstrating how place can be defined by social activity (maybe rather than by jurisdiction).  Livehood uses the data of over 18 million foursquare check-ins to map both geographic distance of frequented venues as well as plotting its ‘social distance’, or ‘the degree of overlap in the people that check-in to them’. Through accumulation of foursquare check-ins, Livehood algorithmically condenses this data into neighborhoods allowing a user to view the pattern sets of other people’s use of space.

Though the project in its current stages is still extremely limited (restricted so far to only three US cities, as well as accessible only to foursquare users) Livehood could develop into an extremely valuable tool for future governments and its citizens, as both a social lubricant and political tool. It also could just as easily fulfill yet another advertiser’s dream.

I think it would be helpful to conduct a parallel survey that contrasts this data set with people who are not using 4square.

I would be skeptical that the behavior of people who use 4square is reflective of the overall neighborhoods in which they live. My guess is that 4square users represent a very particular kind of demographic. Interesting project & website regardless.

Only if those check-ins are truthful right? Or I suppose, from the data sets you mentioned it would be about where certain demographics wanted people to know they were frequenting… thus creating some sort of pscyhogeographical brand image I guess

About a year ago my friend Misha Rabinovich coded something to check himself in as many times as he could so that he create a portrait of his own face onto the American map. The project was called Solace 2.0 but right now his site is hacked so i'll spare us the bogus link. Foursquare didn't find out til months later.

these kinds of projects are really interesting, but they need to be taken with special care: digital divide/inclusion and issues related to multiculturalism must be seriously taken into account.

we take 29 languages into account to observe the real-time lives of cities, and we had to use a massive tech infrastructure to be able to observe all this data

also, the idea of understanding what people say is far from a solved issue. We abandoned the idea of "tags" or "keywords" right away: unless you are looking for people speaking about Nike or Kellogs, there is no way in which observing keywords will produce a reliable results, and it will be ful of false positives.

We have started using Natural Language Processing for this, to much better results.

and, also, we suggest to deeply investigating on the ethics of these processes of observation.

We have discussed some here:

anyhow: nice effort! keep it up!