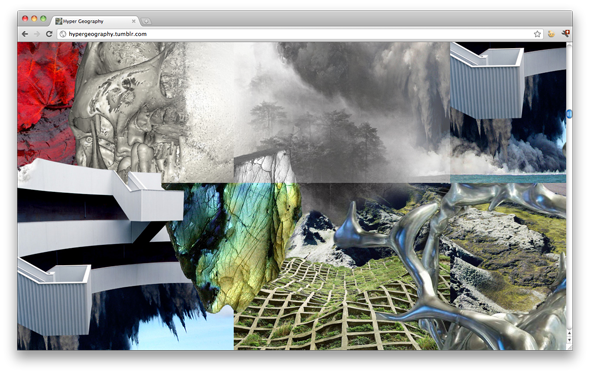 Hyper Geography is a Tumblr created by Joe Hamilton. He describes the blog on the site in a quote: “What in the history of thought may be seen as a confusion or an overlapping is often the precise moment of the dramatic impulse.” — Raymond Williams, "Ideas of Nature," in Problems in Materialism and Culture. (London: Verso, 1980). I caught up with Joe over email to find out more about Hyper Geography and the ideas behind its collagist layout.

Jason Huff: When did you start the project and how did you develop the basic criteria for what you post?
Joe Hamilton: I started in April of this year and, in a way, finished in August. There are 100 looping posts that link together horizontally and vertically. I am working on a script that will once a day take the last post in the loop and reblog it. Then I will leave it. Or not. I'm not sure.
In selecting the images I was looking at our notion of environment and the changing and overlapping definitions of natural, built and networked environments. I gathered images that speak of these definitions and blended them together in to new compositions. An attempt to create a feeling of some type of hybrid environment, a hyper geography.

In addition to the idea of overlapping, the quote on the info page from Raymond Williams's Ideas of Nature mentions the "dramatic impulse" - How does that relate to the project?
Well it is funny but until I read your question I had not made the connection to the word 'overlapping' in the quote and the fact that I was overlapping images in my project. I was referring to overlapping ideas of nature.
The quote is referring to moments in history where many ideas around a single topic coexist in conflict and that theatre or the 'dramatic mode' is more powerful in gaining an understanding.
Extending the quote might make it clearer. "What in the history of thought may be seen as a confusion or an over-lapping is often the precise moment of the dramatic impulse, since it is because the meanings and the experiences are uncertain and complex that the dramatic mode is more powerful, includes more, than could any narrative or exposition: not the abstracted order, though its forms are still present, but at once the order, the known meanings, and that experience of order and meanings which is at the very edge of the intelligence and the senses, a complex interaction which is the new and dramatic form."

You extend tumblr's basic setup into a brilliant and convoluted visual experience. What is your opinion of tumblr as a platform for visual artists?
I'm not sure what I think of it but I like to approach it as a medium rather than a platform.

dang! I thought this was all done with code

or I was hoping it was

Its interesting how I increasingly see the burqa appearing in these expanded future digital cyborg online visual manifestos – I think us western liberals almost see it as some kind of exotic sci-fi dune like star wars fetish gear.