Life Feed: Webcams, Art, and People
By Brian Droitcour
On Friday, June 24, Rhizome is presenting new projects by Jeremy Bailey and Antoine Catala as part of the New Silent Series. This post elaborates some of the ideas around the event. 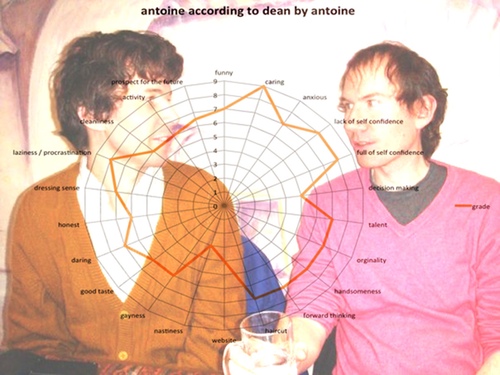 Image: Antoine Catala, Antoine according to Dean by Antoine, 2011
The future never comes looking like it used to. Science fiction's universal hallmark of technological advancement was the videophone. While you can buy a device as slick as a Gene Roddenberry prop, most people make video calls with the same thing they do a thousand other things with, using a streamlined version of the computer-camera-modem combo that Jennifer Ringley set up in her dorm room in 1996. Her site JenniCam (now archived) did not stream a live feed of her life. It updated still images— black-and-white, at first— every three minutes. Traffic leapt whenever word spread that Ringley was undressing, or having sex with her boyfriend. But JenniCam was never meant to be an illicit site. As Ringley explained, she was broadcasting everyday life, and in everyday life sex and nudity happen. Her webcam was like a piece of furniture, a mirror that blankly took in the image of the room it faced. It was connected to the line of the telephone, a device that philosopher Avital Ronnell has described as a superhumanizing prosthesis, a machine that empowers the ear and voice to operate across great distances. The webcam's mirror/telephone hybrid— as used by JenniCam and its lifecasting progeny, from Ustream.tv to Chatroulette— is a messy sort of videophone that captures a reflection at its physical location and disperses it to whatever channel that switches the packets. Rosalind Krauss called video "the aesthetics of narcissism." Her 1976 essay of that name describes Vito Acconci's Centers (1971) as a reflection on art's indexical function: he looks in a television monitor as a mirror and points at himself. One of her other examples was Richard Serra's Boomerang (1974), which locks Nancy Holt in a prison of feedback. She speaks and listens to her own words in a "collapsed present." "[V]ideo's real medium," Krauss writes, "is a psychological situation, the very terms of which are to withdraw attention from an external object— an Other— and invest it in the Self." What do her words mean thirty years later, when video, thanks to webcams, has become part of everyday life as a telecom device? Marisa Olson's remake of Boomerang offers an easy starting point. The webpage juxtaposes a video of Olson listening to and repeating the text of Boomerang with a copy of the old video that she saved on her YouTube account. Serra's tightly constructed frame excludes everything but Holt's face and the audio apparatus. Olson (who did the tasks of both Serra and Holt: the tech set-up and the on-screen performance) lets her webcam show her studio; we can see a doorway, artworks, a bookshelf, the glare of sunlight on a framed print. For Olson, the real "frame" isn't the field of her webcam's lens but the window of the browser, which subsumes both the art-historical past and the webcam's collapsed present in the empty space of default whiteness. She's not only creating a reflection of her own image, but connecting it to an artifact of another place and time by echoing its call. 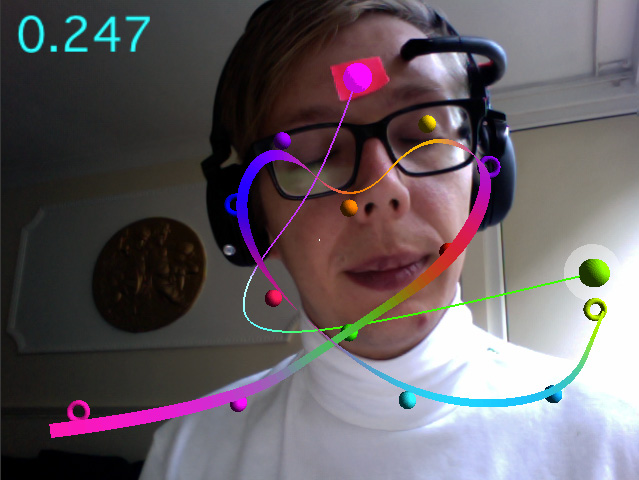 Image: Jeremy Bailey, Thought-Controlled Drawing, 2011
Krauss deepens the psychoanalytic thrust of her argument by citing Lacan's reading of psychotherapy from The Language of the Self: the patient speaks a monologue to his silent therapist, and in the void of the therapist's silence he sees his selfhood as a projected object. Ryder Ripps connects that situation to life online in Internet Therapy, an audio recording of Ripps telling his therapist of the insecurity he has about making a career of web projects. “I’m putting all my eggs in one basket," he says, "and it’s a basket with no end.” He prompts his therapist to respond, and the older man gives voice to conventional opinion, parroting the stereotypes at the heart of Ripps' anxiety. The therapist isn't the silent listener described by Lacan, but part of a feedback loop. For his part, Ripps breaks therapy taboo by secretly recording the conversation. In the disrupted transaction, the internet audience, not the therapist, becomes the silent listener, its presence anticipated by the act of recording. And with the recording, Ripps performs the subject of his therapy session: the projection of his selfhood in the internet's open space. There's no video in Internet Therapy. The webcam creates an intensely visual expression of the construction of identity online, but the "psychological situation" of it, to use Krauss' term, can be expressed in other ways. Eva and Franco Mattes anticipated lifecasting with Life Sharing, an anagram of "file sharing" that they invented to name a three-year project during which they made all the data in their personal computers available online. That was 2000 to 2003. A few years later, YouTube launched, Apple started manufacturing computers with built-in cameras, and Skype subscriptions began to rapidly increase. Justin.tv appeared. "vlogging" was coined. In the 1990s net artists expressed concern with the potential for fabricating alternate identities. But as social media's popularity rose and access to webcams got easier, a more relevant topic was the everyday presentation of self, and the noise added to it by the medium's technology. In 2006, Guthrie Lonergan collected introduction videos that kids made to introduce themselves on MySpace. By severing them from their social-media destination and showing them as a playlist on YouTube, the utility site hosting them, Lonergan made their sameness apparent. "No matter how much users try to 'express' their 'true' selves, each becomes just one more piece of information, one more lonely avatar," Gene McHugh wrote. "And in the end, the avatar doesn’t express itself—MySpace does." If Vito Acconci was playing at Narcissus, these MySpace users are part Echo, doomed to repeat fragments of transmissions they've received. There's something of that in the muteness of VVebcam (2007), where Petra Cortright sits in front of her computer, wearing a blank expression that mirrors the indifference of the camera's lens. Her head bobs slightly to the coolly hollow beats of a machine-generated techno track as she pastes the screen with animated images, copied from somewhere else. 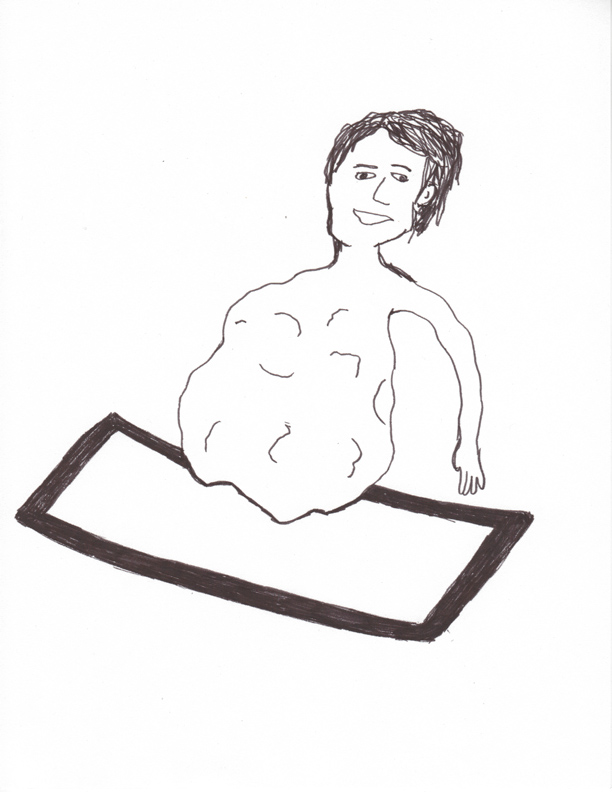 Image: Antoine Catala, How I think I am perceived in other people's minds, 2011
Jeremy Bailey's webcam works of the last five years posed similar questions about technology's limits. His exaggerated on-screen persona — "I'm Jeremy Bailey, the famous new media artist!" — heralded new art forms that would transcend the human body with computers. He imagined the dance of the future and the theater of the future. But in the gap between gushing words and goofy visuals, viewers could see how the prosthetically enhanced arts were poorer than their analogue predecessors. More recently, however, Bailey has moved toward an exploration of vulnerability, asking not what technology obscures or deletes, but what it can expose. He thinks of programming as a kind of drawing, and drawing— as the cliché of art criticism has it— is the most expressive and open of mediums, a record of the immediate contact between the artist's body and the surface he's working with. Thought-controlled computing, a technology provided to him by the Canadian company Interaxon, allows him to draw on the screen with a "brush" controlled by the computer's reading of how focused or relaxed his mind is. Telecom devices may be prostheses, enabling the body to expand its activity in new directions, but thought-controlled computing lets a machine take on the human function of recognizing the emotional state of the other. It suggests an ambiguous future for communication, one that can look especially raw in a live performance, where Bailey's own mental state hinges on the laughter and silence of the audience before him. Two years ago, Antoine Catala made a series of sculptures by painting on the screens of television sets and letting them run. He juxtaposed a naive gesture to a piece of mass-produced technology and its professionally produced broadcasts. Lifecasting drew his interest because, like television, it can serve as a kind of moving wallpaper, but it incorporates naive gestures within the content on the screen, both in the lifecaster's performance and her viewers' running commentary in the adjacent chat box. The looping communication— the presentation of a persona, the anonymous commentary responding to it, and the persona's self-adjustment in response to the response— led Catala to think more deeply about his own presentation of self online and perceptions of him based on the data available, and how to communicate his observations through drawings and performance. Bailey is thinking about what can and can't be shown and shared. Catala's interests lie in what is visible, and teasing out the nature of reactions to it. Both artists are approaching the psychological state of the webcam: creating a reflection of the self, and generating human feedback by offering that reflection as a beacon for multiple, unknown others.

Hi, unfortunately I#m giving site - casting at this moment - 25.06.22.55 -  - people who are watching my broadcast can see how I write these comment.
It's my third performance at http://www.arts-on.de/m.i.r./m/livecam/home/ and it's awfully funny. But I wouldn't mind to get some more people, especially art interested ones, to visit my site and watch or send a little. What created this very new pleasure to share surfing around through the web and every other digital image (camera, video, chat itself, different windows, computers et al) is the fact, that I bought a web cam and tried around a little with it as cheap as it is, throw it around in my room a.s.o. thus, webcam-tv is boring or sheer stress - especially if you want to look good and don't - if the webcam is watching you - while you talk ! The nose goes up and down, everybody can look at your teeth….Really NO. It a NOGO. But sharing the looking around in the web is more than great. Just look at it. I'll show you some fun. Or send your own cahannel on ARTS-On.de. By the way, I´d already announce the event…
Sorry for mistakes in this text, but I'm working with the webcam while writing. It's difficult…