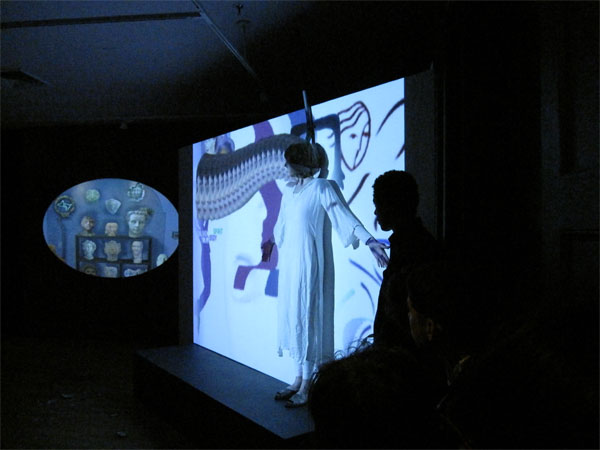 Shana Moulton performing "The Undiscovered Antique" at Art in General

The current exhibition at Art in General is “Erratic Anthropologies", which features Guy Benfield, Shana Moulton, Rancourt/Yatsuk, and Hong-An Truong, who construct narratives through video and performance that investigate a host of social subcultures (from hippie crafters to failed south Florida housing developers). In collaboration with Performa 09, a special series of performances have been organized to accompany the show. Last Wednesday, November 10, Benfield, Moulton, and Rancourt/Yatsuk performed in temporary environments in the gallery space. They will perform again tonight at 7pm. Rhizome Curatorial Fellow Jenny Jaskey writes about Shana Moulton’s "The Undiscovered Antique."

In a crowded room on Wednesday night, video and performance artist Shana Moulton presented the ninth installment of Whispering Pines, a series in which her alter ego Cynthia relishes the life-changing potential of home décor, beauty routines, and self-help mantras. Cynthia’s obsession in this episode, entitled The Undiscovered Antique, focuses on her journey to confirm the value of personally meaningful domestic artifacts á la The Antiques Roadshow. Moulton’s work is a layering of video, performance, and prop staging that is, in its more effective moments, abstract and dreamlike. In the spirit of Sara Goldfarb minus the amphetamines, Cynthia fantasizes about the transcendental payoff of her kitsch consumer fetishes, which include a head massager and footbath. Moulton achieves this sense of escapism by fully integrating her character into a two-dimensional digital landscape: projected objects move in choreographed syncopation with Cynthia’s body, sometimes appearing to control its movement or color its surface.

Moulton’s work makes us particularly attuned to the social structure surrounding its protagonist through its exaggerated and fragmented representation of Cynthia’s environment. It uses this fiction as a means for creating a kind of framed anthropological analysis (in one interview I read, the artist says she began as an anthropology major and switched to art later in college). What became striking through this latest performance was not only the extent to which mass produced objects take on spiritual or healing significance for Cynthia, but how consumerism itself functions as a kind of religious outlet for her: the collection of “ritual” products, the pilgrimage to Roadshow, the promise of transformation through the practice of domestic consumption. If Moulton the anthropologist is showing us something, it is perhaps how our appetite for worship finds itself both in and outside of religious structures; organized consumption holds as much promise for accessing power and healing in Moulton’s scenario as organized religion might in other contexts.

Moulton’s practice uses the strategy of embodiment shared by artists across a wide swath of practices - Cindy Sherman, Michael Smith, Lynn Hershman Leeson, Tamy Ben-Tor, Yasumasa Morimura - to name a few, but the work finds its singular voice and appeal in Moulton’s personal and diaristic attachment to her character. It is the artist’s close affiliation with Cynthia (she views the character as connected to her own psyche) that keeps the work from spiraling into irony.

Moulton’s work makes us particularly attuned to the social structure surrounding its protagonist through its exaggerated and fragmented representation of Cynthia’s environment.