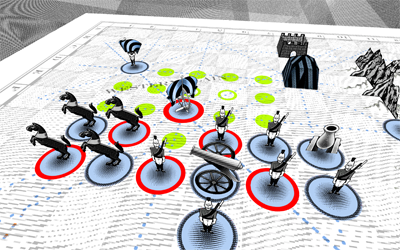 "I suggest that game studies should...turn not to a theory of realism in gaming as mere realistic representation, but define realist games as those games that reflect critically on the minutia of everyday life, replete as it is with struggle, personal drama, and injustice."- Alex Galloway

In his book Gaming: Essays on Algorithmic Culture, Galloway tackles the notion of "realism" in video games. By distinguishing between representational and social realism in contemporary game culture, he illuminates how militaristic, political and social norms are both reinforced and challenged. For his current project, with the programming collective Radical Software Group ("RSG"), Galloway and his collaborators (Carolyn Kane, Adam Parrish, Daniel Perlin, DJ /rupture and Matt Shadetek, and Mushon Zer-Aviv) address realism in war games by creating their own- based on "The Game of War" designed by French theorist, activist, and iconoclast Guy Debord. Debord attempted to realistically represent the basic rules and relationships of war through a simple board game known as "Kriegspiel", a variant on chess in which a third party, either human or computer, acts as a referee and mediates the movement of the opposing forces. The game's end is often indeterminate and subject to the personality of those who are playing, which, given the current war in Iraq, certainly seems realistic and gives credence to Debord's assertion that, "with [some] reservations, we may say that this game accurately portrays all the factors at work in real war." RSG translated Debord's set of rules from French into Java, and has released it as an online war game called "Kriegspiel". Debord, as a man who's probably best known for his book The Society of the Spectacle, which closely examined the use of the mass media as a political tool, the fascination and reenactment of the war machine may seem somewhat incongruous. But as both The Society of the Spectacle and "The Game of War" meditate on notions of power and representation, it could also seem a logical extension of his thinking. Through the use of the network and computers, RSG's online version further draws out Debord's objectives, and although not realistic in a representational sense, their "Kriegspiel" depicts the political and strategic realities of war far more realistically than the usual video game fare. "Kriegspiel" will be presented tonight, Friday February 8th at MTAA's space OTO in Brooklyn, NY.- Caitlin Jones


Editor's Note: Unfortunately, the "Kriegspiel" event at OTO has been cancelled. They will reschedule soon. In the meantime, we suggest that Rhizome readers in the New York area attend our panel tonight Nextcity: The Art of the Possible at the New Museum.

We sadly had to cancel the event at the last minute but we’re back on for Friday February 22 (7pm to 10pm). Time to get your war on.

BYOL (Bring your own Laptop)