Off: Endgame
By Rhizome 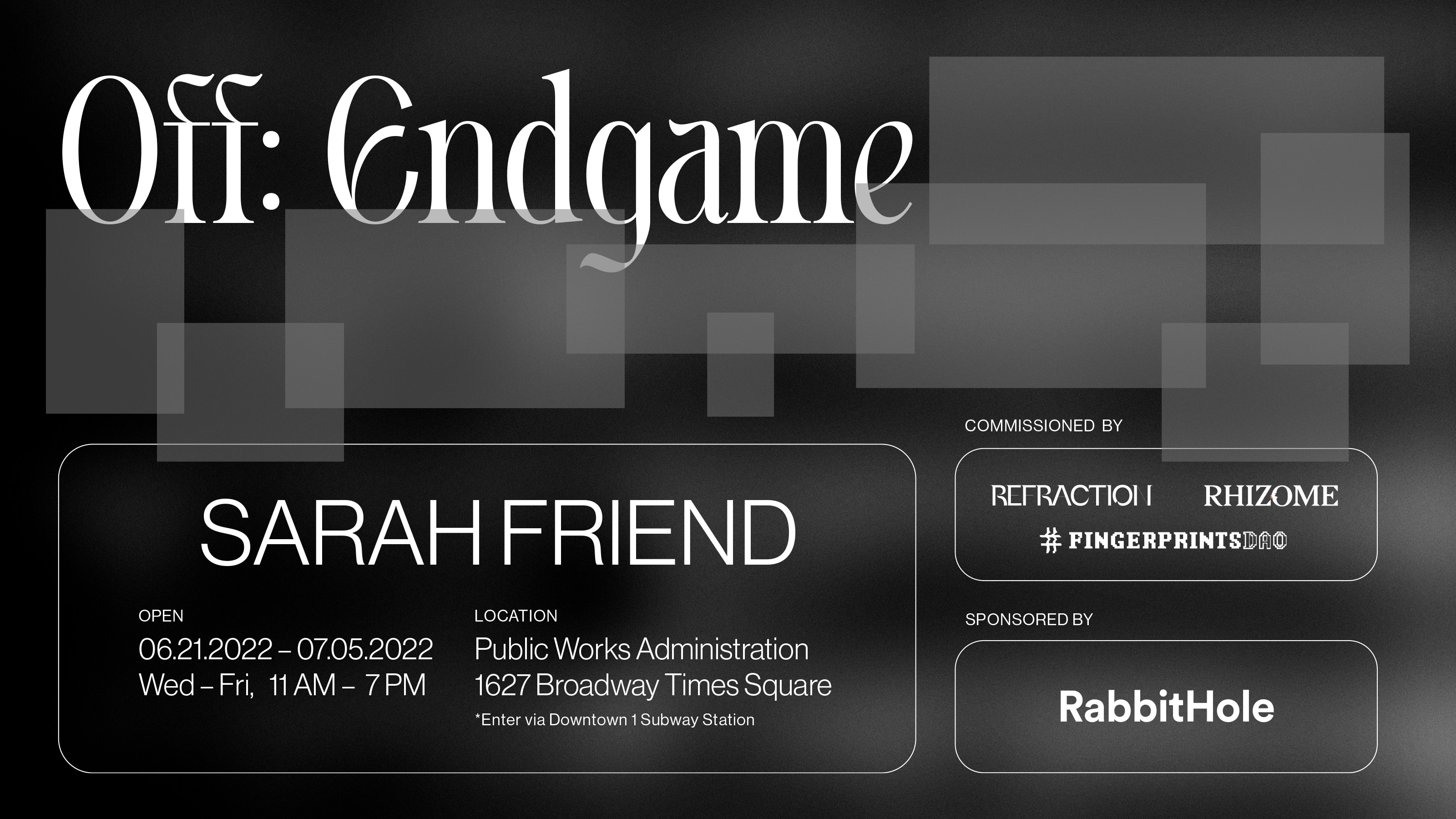 Presented by Fingerprints, Refraction, and Rhizome
Sponsored by Rabbithole

“Off: Endgame” is an exhibition of new works by Sarah Friend that reflect the artist’s ongoing interest in how NFTs can be used to construct experimental forms of ownership as well as to transmit and conceal information. The exhibition will feature the final drop from Friend’s ongoing project Off and the debut of a new work, Wildcards.

Off is both a series of artist editions and a multiplayer game. The series contains 255 unique editions, each of which is based on the pixel dimensions of a particular screen—a computer monitor, smart phone, or tablet. Each collector obtains both a public NFT—a black monochrome JPG—and an image that they receive privately, by email. The private image looks exactly like the public one, but it contains a secret: encrypted data that can only be revealed if 170 of the private images are combined by their respective collectors, requiring at least 2/3 of them to cooperate. The artwork thus becomes what Friend describes as “a kind of social sculpture, or perhaps, massively multiplayer prisoner's dilemma, that engages collectors in the determination of its future meaning and de-centers the NFT artwork from the JPG.”

The exhibition will also include Wildcards, a new work by Friend that draws inspiration from magicians’ marked decks—playing cards in which card numbers are disguised as part of the design motifs on the cards’ back. Customized card decks can be purchased individually at the exhibition; each deck contains instructions for minting one NFT from a randomized set of 52. The NFTs minted from Wildcards will not become tradeable or transferable unless the Off secrets are revealed.

“Off: Endgame” was commissioned as a partnership among Fingerprints, Refraction, and Rhizome. A portion of proceeds from edition sales will be donated to initiatives that promote carbon sequestration.

Sarah Friend is an artist and software developer, specializing in blockchain, games, and the p2p web. She is a participant in the Berlin Program for Artists, a co-curator of Ender Gallery, an artist residency taking place inside the game Minecraft, and an organizer of Our Networks, a conference on all aspects of the distributed web. Recent exhibitions include Worldbuilding, Julia Stoschek Collection, Düsseldorf; Proof of Stake, Kunstverein in Hamburg, Hamburg; Breadcrumbs, Galerie Nagel Draxler, Cologne; Proof of Art, Oökultur, Linz; Salon Solaire, suns.works, Zurich; Panarchist's Dinner, Floating University, Berlin (2021)

Public Works is an underground digital art gallery in the 50th Street subway in Times Square.

Fingerprints is a global community dedicated to blockchain art. It collects artworks that explore the creative possibilities of blockchain and commissions new projects by leading digital artists.

RefractionDAO is a diverse community who produce festivals and ongoing events, release NFT projects, and create written, visual, and audio content around art, culture, and music today. This year’s festival will happen across the globe, with the performances, installations and music sets being recorded to culminate in an extended festival in the Open Metaverse.

Rhizome champions born-digital art and culture through commissions, exhibitions, scholarship, and digital preservation. Founded in 1996 by artist Mark Tribe as a listserve including some of the first artists to work online, Rhizome has played an integral role in the history of contemporary art engaged with digital technologies and the internet.