Empathy is Not Enough, Part II
Virtual Reality and Selling Empathy to the Rich
By Lana Polansky 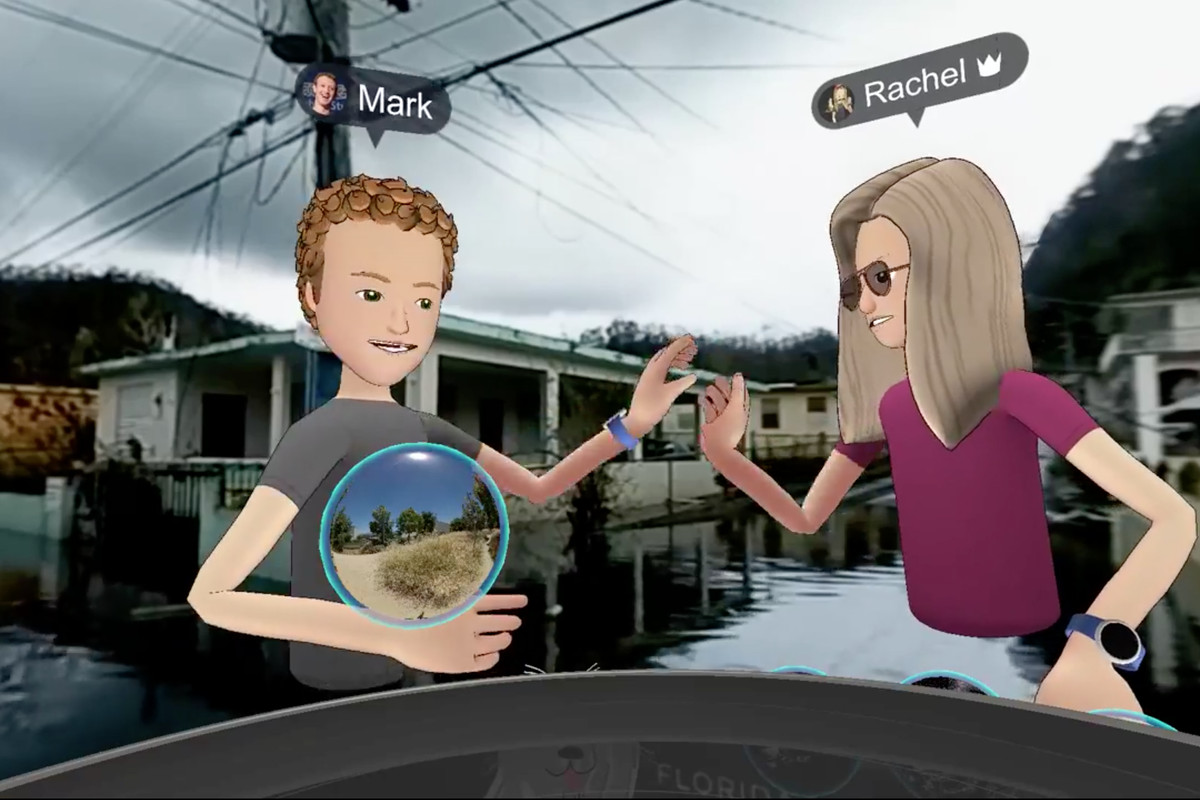 In this three part series originally published in German by WASD, Lana Polansky explores the history and use of “empathy” in games since 2008. In Part I, Polansky detailed the popularization of “empathy” as a marketing buzzword in the games industry. Part II dives into the adjacent world of Virtual Reality.

Chris Milk, the founder and CEO of virtual reality tech company Within, and the co-founder of  virtual reality production company Here Be Dragons, gave a TED Talk in 2015 entitled “How virtual reality can create the ultimate empathy machine.” In the video of the talk, he described his work trying to create VR experiences that truly “immerse” players, encapsulating them fully in a simulation and making them feel like they’re there, as first-hand witnesses. Milk characterizes his preoccupation working with film as one based on empathy, stating that “...film is this incredible medium that allows us to feel empathy for people that are very different than us and worlds completely foreign from our own.”

The director-turned-businessman also describes his work creating immersive VR films, primarily about the struggles of people living in war-torn and poverty-stricken areas of the world. Namely, he discusses Clouds Over Sidra, a collaboration with VR director Gabo Arora set in a Syrian refugee camp in Jordan. It follows the story of Sidra, a 12-year-old Syrian girl living in the camp, and uses a 360-degree camera to insert the player into footage of the camp. It promises to instill the player with empathy for Sidra “in a deeper way,” whatever that means. Less is said about what this empathy actually translates to for Sidra, or for any other human being living in this refugee camp.

To raucous applause, Milk explains how he took his film, produced in collaboration with the United Nations, to the World Economic Forum at Davos that January, and showed it to attendees “whose decisions affect the lives of millions of people.” He refers to business leaders, politicians, and other elites who may not otherwise find themselves “sitting in a tent in a refugee camp in Jordan” (but who perhaps should), that he flatly insists were “affected” by the film. 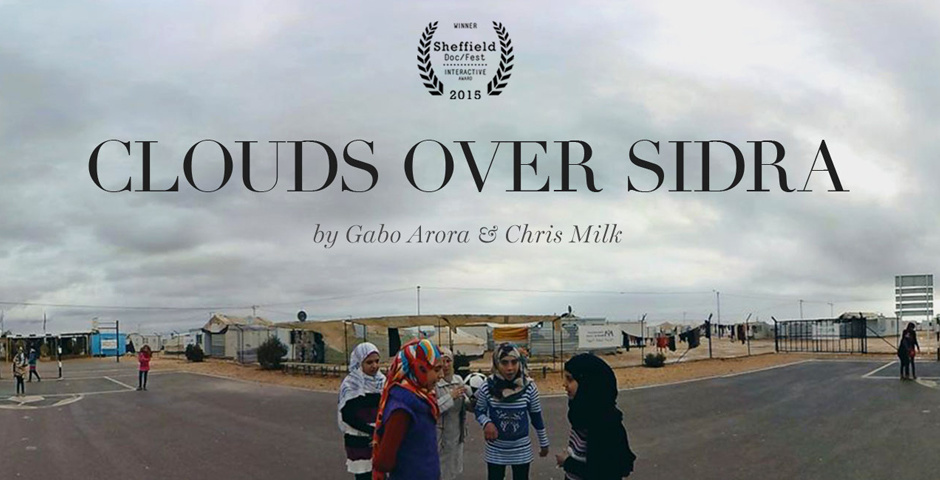 Milk then announces future collaborations between his VR tech company and the United Nations, one set in Liberia (Waves of Grace) and one in India (apparently unrealized). To underscore the importance of his VR documentaries, Milk ends his talk by arguing that the “true power” of VR has yet to be discovered, that VR is “not a game peripheral,” but rather a perception-changing miracle machine that could, echoing the words of Jane McGonigal, “change the world.” VR, then, improves on games by being an even more complete experience, rendering everything before it petty and obsolete.

Milk’s point of view is shared by VR designer Nonny de la Peña, who, true to VR designer type, also gave a TED Talk entitled “Virtual Reality is the future of news.” De la Peña is also the CEO of Emblematic Group, which despite sounding like a front for a private mercenary firm is actually an “immersive news” company specializing in VR documentaries similar to the ones made by Chris Milk. And like Milk, de la Peña also did a VR documentary about Syria, called Project Syria.

An Engadget profile on de la Peña from 2015 calls her the “godmother of virtual reality.” It notes her oft-publicized acquaintance with her former intern, Oculus CEO and Trump campaign contributor Palmer Luckey, but de la Peña’s backers make it clear that she’s a powerful figure in her own right. Project Syria was funded by, among others, Google, the Associated Press, and the World Economic Forum; it also made an appearance at Sundance Film Festival.

De la Peña, like Milk, believes that VR is capable of affecting those who step into simulated reconstructions of very real, very dangerous situations. In the Engadget profile, she calls it a “visceral empathy generator,” and proclaims her intention to use this tool to become “the high-end folks” of the VR market. This may be because VR, at least up until very recently, did not generate have enough market penetration to be accessed by the masses anyway: in 2017 Oculus had to slash the Rift’s retail price in response to sluggish sales, it’s not clear there’s much of a VR market to speak of, at least not currently. Variety reports recent sales estimates for the Oculus Quest to be solid but not overwhelming. VR, despite advances in technology, remains an indulgence of relatively few.

After the Engadget profile was published, Emblematic Group found a way to make their work more accessible via a partnership with the New York Times, which led to VR films about solitary confinement, homophobia, war-torn Sudan, and a virtual tour of the original Cartier store, all viewable on a smartphone with the download of an app. The VR film about Sudan, Who We Remain, is still available for download, but Emblematic appears to have completed their collaboration with NYT and have moved onto a project with web browser company Mozilla.

The NYT app is still available, owned entirely by the New York Times Company, and is still being put to use by savvy techno-philanthropists. Travis Feldler, the founder of non-profit TechRow Fund, which “explores how to leverage immersive technology inside schools to improve learning outcomes,” touts the benefits of the app as an educational aid primarily for use in middle schools. The narrative established by figures like Milk and de la Peña, in which VR documentaries have the power to effect change by documenting hardship and poverty in lurid detail, lives on through initiatives like this.

The use of “empathy” to market games and VR experiences was the subject of a pointed critique by independent game designer Robert Yang on his blog in 2017. Yang bluntly tackled the ethical dilemmas posed by “ethical machines.” He described his mistrust of “empathy” as a selling point, arguing that it has often been used to exploit the suffering of others while demanding nothing of the player other than that they “empathize”—a thing that’s difficult to prove, and of little use to oppressed communities. Referring to his own experience as a gay man who makes games for and about gay people, Yang proposed that perhaps “empathy machines” would more accurately be described as “appropriation machines”:

I'm very familiar with people annexing other peoples’ experiences under the banner of empathy. Specifically, I’ve been making realistic 3D games about gay relationships for a while, and the vast majority of my players and fans happen to be straight people. This leads to a widely held but incorrect assumption that I make my games for ‘straight people to understand what being gay is like’—and some of the worst homophobes on YouTube even call my games ‘gay simulators’ so they can react with disgust toward it.

This ‘straight empathy’ suddenly makes my games more about ‘how beautiful and benevolent the straight people are, to tolerate my gay existence instead of vomiting’—instead of highlighting gay culture or queer solidarity, as I intended. I want to imagine fantastic worlds where straight people aren't as important—and yet, they demand that I dance for them in VR, whenever they want, forever. For this reason, I hate it when people think my games are like empathy machines. I don't want your empathy, I want justice!

I tend to agree with Yang. It’s not clear that empathy is a meaningful goal for a developer to have when addressing subjects like homophobia, poverty, transphobia, racism, or war and displacement. The focus on empathy also reveals certain contradictions. For example, if empathetic games and “VR experiences” are not meant to be fun, it’s showing one’s ass to frame an experience of supposedly profound gravity through the language of entertainment. This was brought vividly to life when, in an incredibly ill-advised attempt at a live-stream in 2017, Mark Zuckerberg and Facebook’s head of social virtual reality, Rachel Franklin, decided to use their VR tool “Spaces” to “travel” to Puerto Rico in the aftermath of Hurricane Maria, superimposing cartoon avatars of themselves onto footage of the flooding and wreckage.

This is more than just a matter of poor taste. In many cases, these “empathy machines” may lead to outcomes that undermine their own stated purposes. In a revealing interview with NYT, de la Peña discusses her VR film, One Dark Night, based on the murder of  17-year-old Trayvon Martin by George Zimmerman. She says, “I’ve had a journalist say that they better understood Zimmerman’s position.”

While media can be both entertaining and edifying, pretending that empathy is a guaranteed outcome, and that the ludic dimension of VR experiences can be ignored, only confirms the accusation that “empathy” is marketing rhetoric used to make media properties sound more meaningful than they actually are. It also further obscures the motivations for making and consuming these properties, dressing up toys for the well-off as evolutionary leaps in science and art. Empathy rhetoric rarely if ever distinguishes between the intellectual or emotional variety, and it lies when it attempts to then guarantee compassion, solidarity, or any other “emotionally mature” response in those doing the empathizing. Rather than being an adequate stand-in for real emotional, artistic, or political engagement, “empathy” in and of itself is one of the most evasive and empty goals a work of art can have.

Likewise, if the elites that attend the World Economic Forum or Sundance play a game about poverty or global warming or the Syrian refugee crisis, but they are already ideologically and pragmatically predisposed to exacerbating all of those problems, of what use is their empathy to those whose suffering is being consumed as entertainment?

Empathy, Yang explains, has often been used historically by the dominant classes in a society to reconfigure the oppression of the underclasses into something more sympathetic and palatable to their sensibilities. By making oppressed groups more entertaining and “relatable,” the powerful can feel like they’re doing penance while simultaneously releasing themselves from any responsibility toward those groups.

A similar operation takes place today in “empathetic” technologies: betraying one’s class and struggling for material changes is hard and very often comes with no reward, but slick new technology that makes one feel like a good and understanding person is easy and offers an obvious reward. This way, players can feel like they’re doing something by literally stepping into a simulation, made up of the carefully shot and constructed perspectives of those who held the camera, and know the whole time that they’re beyond the realm of actual political accountability.

In Part 3 of this series, Polansky will touch on the largely forgotten history of virtual reality art projects, and the possibility for alternatives that aren’t beholden to market logic.