The 24/7 Exhibition
On “Redirección,” an online exhibition for Colombia’s Salón Nacional
By Michael Connor 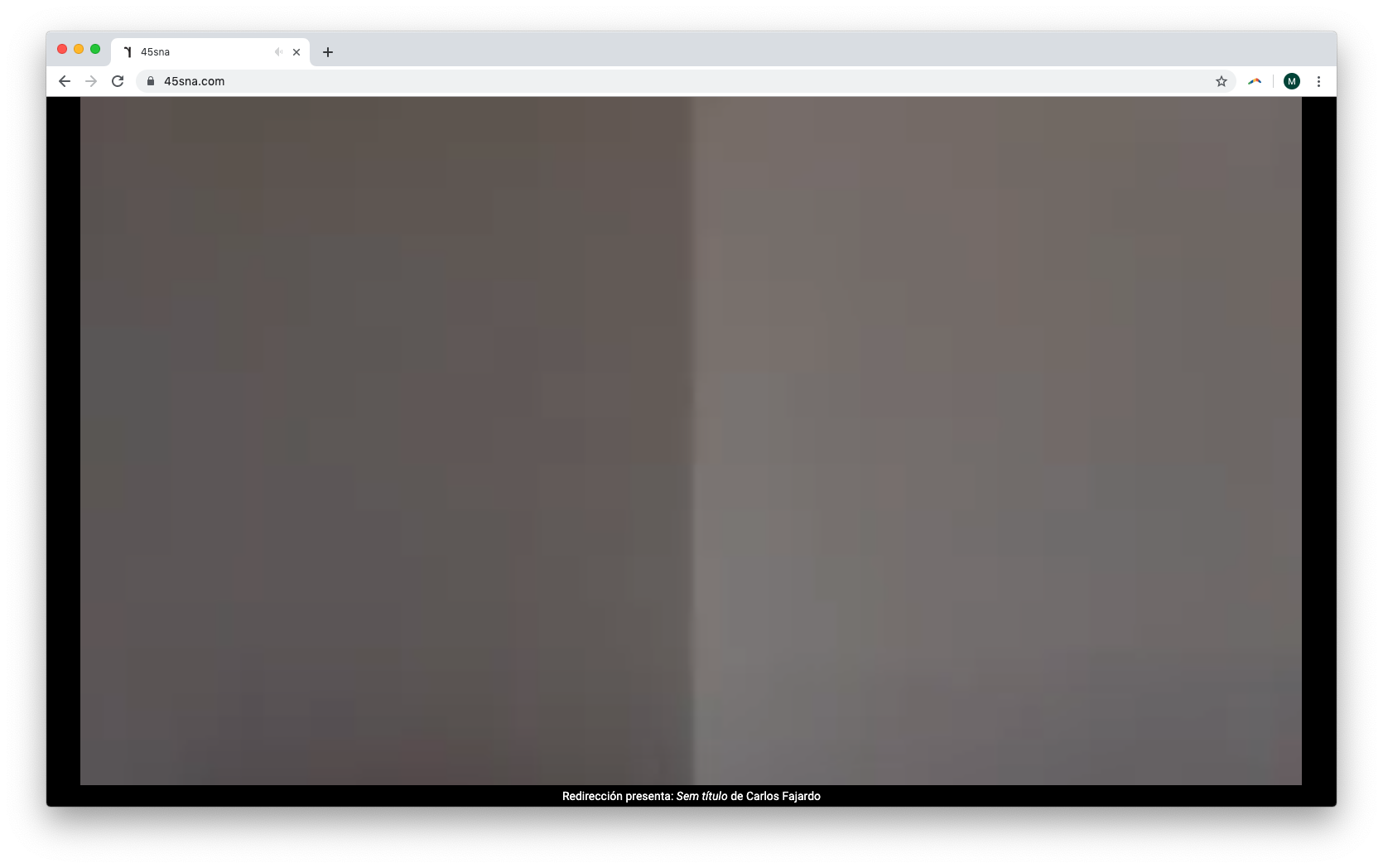 This week, Brazilian conceptual artist Carlos Fajardo presents a new work as part of “Redirección,” an online exhibition for the 45th Salón Nacional de Artistas de Bogotá, curated by aarea and artist Ana Maria Montenegro. This marks the first time that the Salón—originally established in 1940—includes artworks created specifically for the web.

A remake of one of Fajardo’s photographic works from the early 2000s, Sem Título consists of a live stream of a corner of a nondescript room. In an Instagram post accompanying the work, aarea describe the work as follows:

The live images are recorded by a stationary camera, placed in an indoor environment, and aimed at a corner of a room. The camera is set to record 24h a day for 7 days straight, registering the variation in sunlight, from sunrise to dusk, upon the two walls that form a corner.

With this untitled work, the first in his oeuvre to be developed exclusively for the internet, Fajardo reworks a series of black and white photographs taken by him in the early 2000s. The series in question, also untitled, depict the same pictorial interest: natural light viewed in relation to the surface of two perpendicular walls.

As an online remake of a physical work, Sem Título offers an opportunity to consider the relationship between web-based and gallery-based artwork. This comparison is complicated by Fajardo's subject matter: an ordinary corner of a room; a clean, minimal architectural form that evokes the idealized white cube gallery space. But where the white cube is intended to function as a timeless non-place, Fajardo’s subject is quite the opposite.

The corner depicted in Sem Título is both more generic than the white cube, and more specific—any type of architecture, any two perpendicular walls, but ones with specific, non-idealized qualities, with natural light falling on them in a unique way from moment to moment. This endlessly variable corner stands in contrast with the archetypal, hermetically sealed white cube gallery. (In his classic text on the subject, Brian O’Doherty writes of such spaces that “The outside world must not come in, so windows are usually sealed off.”)

With online exhibitions, there is no real default architecture. The white cube still continues to haunt such projects as an idealized referent: it may be replicated as a simulation, as in Timur Si-Qin’s Chrystal Gallery; it may host opening receptions or networked events, as in the upcoming Wrong biennial; it may be present in online documentation. Nevertheless, online exhibitions must propose their own structure and architecture without such a default to rebel against. Creating such an exhibition involves giving a certain form and order to a set of experiences and relationships accessed through the network.

In “Redirecctión,” that structure is as follows: nine works shown individually, only available for a limited period of time, via aarea.co and an overlay on 45SNA.com, and one other work embedded within 45SNA.com throughout the exhibition run. Fajardo’s is the eighth of the nine rotating commissions. Each of the works that I have seen so far have taken on this theme in fairly distinct ways, but most have dealt in some way with the question of time, and with how this is mediated by the network. Yoshinori Niwa’s Having Someone’s Birthday Party presents a series of YouTube-sourced birthday party videos that coincide with whatever date it is accessed. Aline Motta and Rafael Galante’s Cuerpo Celeste was a kind of interactive clock and poem based on the Bakongo Cosmogram, a symbol of Kongo culture that has played an important role in Brazilian folk culture and spirituality. And Cine continuado by Iván Candeo created a multi-window film collage that offered a kind of kaleidoscopic view of Colombian history. (It should also be noted that this latter work was also an impressive use of the YouTube API to create a multilinear experience.) 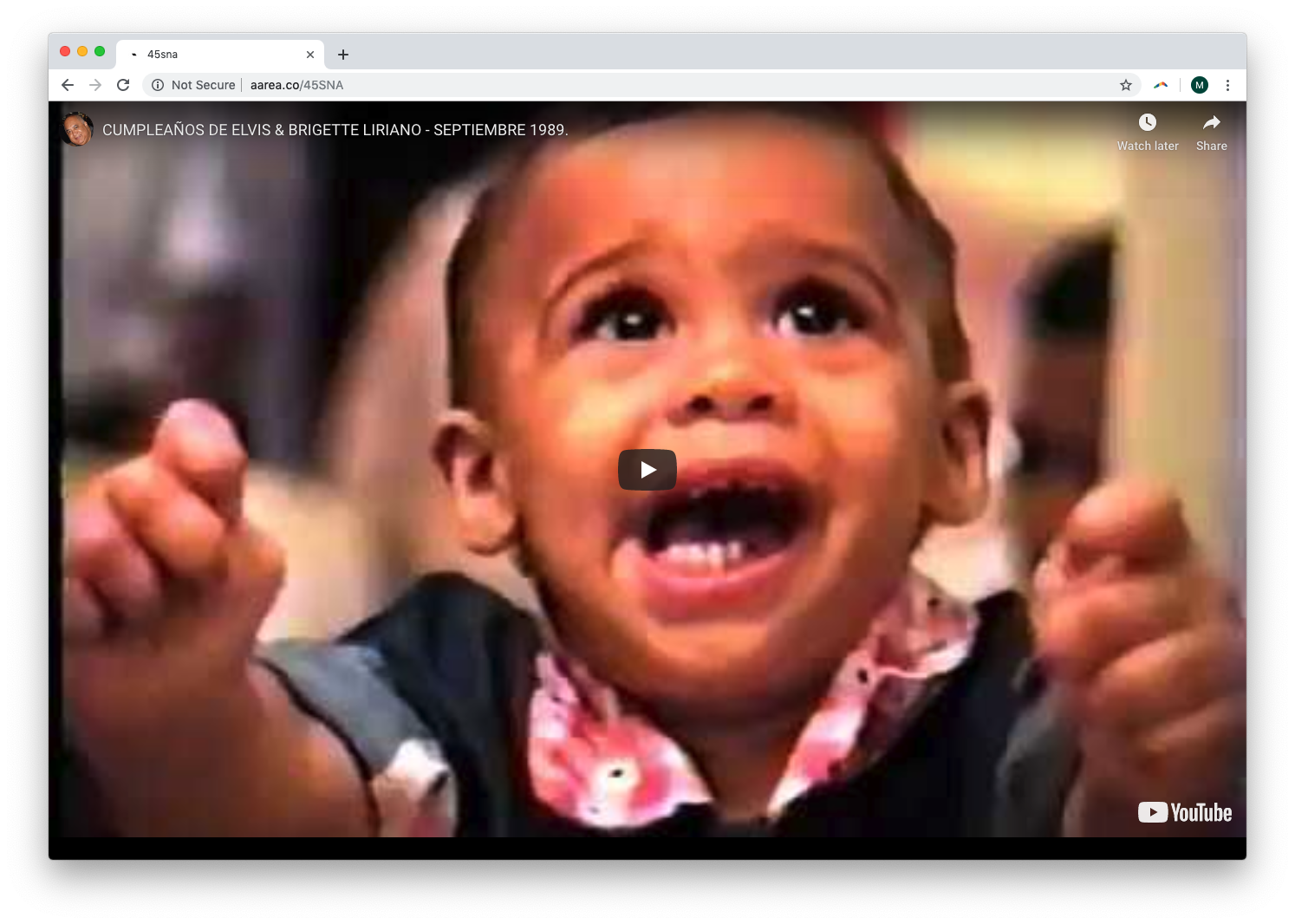 The passage of time is thematized in the works and the curatorial structure of “Redirección.” It is made palpable, material, and specific. This stands in contrast with the typical function of time on the internet, where a myth of 24/7 access is always carefully maintained, only to be shockingly interrupted by obsolescence, bankruptcy, infrastructural failure. Crucially, though, also stands in contrast with the function of time in O’Doherty’s White Cube, where art was to exist “in a kind of eternity of display, and though there is lots of ‘period’ (late modern), there is no time. This eternity gives the gallery a limbolike status; one has to have died already to be there.” Similarly, one might argue that the internet’s mythology also aims to grant it a kind of limbolike status: untouched the vicissitudes of place or time, an immaterial cloud.

The changing light that lands on the nondescript corner of a room that streams live on Fajardo’s Sem Título can be read, perhaps, as a reflection on the passage of time in the online exhibition, and on the internet. Instead of an eternity of display, accessible only to idealized spirits without bodies, it is a highly contingent structure that allows each moment to manifest uniquely, before giving way to the next.

The works are on view at www.aarea.co and on the Salon’s website on a rotating basis through November 5, 2019. Sem Título is on view through October 29.