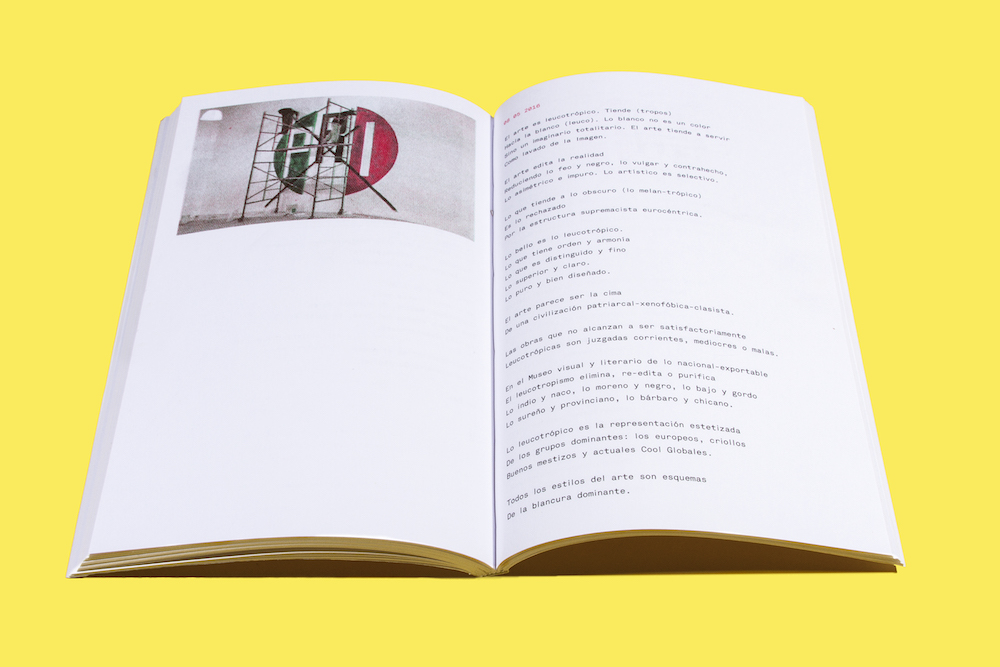 This article accompanies the inclusion of Mexiconceptual (2016) by Heriberto Yépez (Satélite) in the online exhibition Net Art Anthology.

Heriberto Yépez is a critic in a very literal way; he prolifically criticizes politics and the state of the Mexican cultural industry. He is also a bilingual author, poet, and translator who has been extensively published, a theorist, professor, philosopher, literary and art critic, artist, cultural organizer, blogger, and former twitter user. His presence in Mexican culture is over-sized mostly because of his preternaturally controversial bent. Antagonism is one of his oft-used tools, and it puts him in a position he relishes: on the About page of his website he claimed to be “persona non grata for, at least, two literatures.” This, of course, does not in any way mean that his criticisms are not valid, accurate, or pertinent. It just means that one must always be looking out for the chip-on-the-shoulder that may have fallen in his words.

Mexiconceptual was a website and online action organized by Satélite, a curatorial initiative initiated by Mexican curator Violeta Horcasitas to reflect on the museum as institution and to collaborate with artists in works that share a “parasitic” spirit in the vein of #occupy. Mexiconceptual was conceived as the first intervention in what could be deemed the online-institutional space: the parts of social media where cultural workers and commentators discuss and re-shape the discourse. In line with Satélite’s other actions and pieces, this one was also ephemeral. Yépez’s short texts ruminating on Mexican conceptualism and its relation to institutions were published at a rate of one per day during the month of May 2016, and they disappeared with the arrival of the next, after 24 hours. After that, they were only retrievable via the social media posts of the people who shared them, and in a limited edition, collector’s book published in 2018.

As with most of Yépez’s criticism, Mexiconceptual pulls no punches when addressing the Mexican cultural apparatus. In a poetic-prose format, Yépez denounces the Neoliberal Museum, the cooptation of political conceptual art, naturalized curatorial narratives, the centralization of culture, convenient erasures, and the concept itself. He names all the names and describes the clientelismo1 he has seen happening between the state and Mexico City artists since the 1990s. He depicts Mexican art as an export commodity that is hyper-centralized in the country’s capital to the point of neglecting the rest of the states—a scene in which the government dishes out grants and awards amongst friends, while people from provincia (the provinces) are forced to remain on the outside looking in or relocate to make a dent in national culture.

In Yépez’s analysis, the Neoliberal Museum doesn’t have viewers or participants but clients. These museums provide an “informative and entertaining experience.”2 They are fun, and in order to remain that way, they rearrange the histories of the colonial museum and the national museum every season, like a game of art-historical musical chairs. These institutions are constantly co-opting political art and discourses for the benefit of a comfortable narrative. Yépez warns about well-intentioned conceptualism being at risk of becoming the “utopian pedagogy” that the Neoliberal Museum will use as a facade for the sanitation of dissent.3 This museum transforms that which is repressed in political life into national patrimony—whether that be the cultural practices and insurgencies of indigenous communities, always institutionally venerated yet violently and materially oppressed, or the radical conceptual praxis of Los Grupos.

Los Grupos, an umbrella term for a generation of politically minded artists who worked collectively between 1977 and 1982, inspired by “[the student resistance and eventual massacre of] 1968, popular culture and Marx,”4 are mentioned more than a few times in Mexiconceptual. Yépez rails against the oft-repeated, established narrative that argues its members disbanded in order to pursue their own individual careers, which conveniently ignores the hardships inherent to political dissent under the PRI5 regime, and the economic crises of 1976 and 1982. Los Grupos’ active years also coincided with the height of the Dirty War, “the Mexican theater of the Cold War,”6 during which the PRI-state, backed by the United States, violently repressed oppositional student and guerrilla organizations through forced disappearances, systematic torture and extra-judicial executions. That this entire conflict is kept out of history books and, notoriously, out of the narrative of Los Grupos, strikes Yépez as no accident. The Neoliberal Museum manufactures instead a story that points to an understandable evolution “from the (leftist) groups to the Liberal Individual Creator.”7

In opposition to what the Neoliberal Museum defines and values as conceptualism, art that Yépez sees as removed from its historical context, already co-opted and domesticated; he presents “post-conceptualism”: practices that “call into question the lineal history of the conceptual canon.” He names Ulises Carrión, Melquiades Herrera, Guillermo Gómez Peña, and Marcos Ramírez Erre as examples of this. The first three artists, however, have already been somewhat assimilated into the neoliberal institution since they were subjects of large retrospectives in major museums in the past two years. Carrión, a conceptual and fluxus artist whose work has occupied much of Yépez’s writings, had his at Museo Jumex, an institution that must have been in Yépez’s mind as he outlined the Neoliberal Museum. Even as he mentions these artists, he says he is against the idea of a genealogy, explaining that true conceptualisms are never lineal, always discontinued, there are no family portraits. Yet he compiles a list of worthy conceptualists that includes the four aforementioned artists and some of his contemporaries: Pablo Helguera, Hugo García Manriquez, Divya Victor, here he literally names himself, and Sara Uribe. Right after this, he asserts that "art discontinuities" should replace “art history.”8 And this is where things get murky.

At some point in Mexiconceptual, the “concept” becomes a placeholder for everything that is wrong not only with the museum as an institution, but with politics, the world, and history; while “no-concept” are the things that Yépez inexplicably idealizes: native plants, the moon, the rain, an inchoate nod to the speculative turn that feels on trend, but forced. “Post-concept” is then everything that he wishes for, perhaps things that are already happening but that he nevertheless imagines as liberating, like mixed media. Somehow, he sees the page meeting the frame meeting the screen as emancipatory.9 He also declares that “museum guards should be substituted with initiations led by wise-shamans who possess the knowledge and power of interacting creation,” and honestly, what is he even talking about? When he says curators should be replaced by “healers,”10 does he really think they are mutually replaceable? Why would the cultural/religious rituals of indigenous communities act as museum stand-ins? Are they even interested in that? These connections are not obvious at all beyond a shallow, not-too-subtle fetishization of indigenous people’s insurgencies and cultural practices. They seem to function here as ornaments, to flaunt a certain flavor of radicality.

Early on in Mexiconceptual, Yépez talks about the “maltrato” or mistreatment of others and characterizes it as self-hate projected unto our peers, but immediately redirects it as something done by others, not himself.11 The truth is Yépez regularly scolded and often insulted Twitter users that he didn’t read as adequately radical or as clear-eyed as himself, especially basking in every single “I told you so” political moment and the tips-fedora approval of the people—mostly men—who jumped on his bandwagon. While being vocally critical and going against the grain is no easy task, Yépez seems to forget that the hardest thing to do is bring people together. The artworld everywhere, but especially in Mexico, needs organizing, collectivization, unionizing, equality of opportunities and remuneration. All of that requires empathy and solidarity among peers; we are all art workers. Nothing of the sort is to be found in Mexiconceptual. There is instead a thorough stripping down of all the well-worn names of the Mexican artworld elite, and the fetishization of indigenous peoples’ rituals as an ambiguous salve for it all. In the end, if shamanism alone could dismantle oppressive systems, all the Wall Streeters and Silicon Valley disruptors getting high on ayahuasca in Peru would already be out here redistributing their wealth and paying reparations. They aren't.

On his website, Yépez also claims the purpose of his writing is to destroy himself “including everything.” One just wonders what his rebuilding plans would look like.

1 Clientelismo is defined by Real Academia Española as the “system of protection [that] people of power provide for those who embrace them in exchange for their … services.” For Yépez this is a major issue in the cultural sector, where writers, poets and artists offer toothless critiques of their peers and institutional superiors to stay on their good side for grants, awards and jobs.

5 Hard to sum up in a footnote, but the PRI (aka the oxymoronic Revolutionary Institutional Party) ruled Mexico at every level for 71 years, from 1929 until 2000. The PRI regime was expansive and brutal against dissent, orchestrating the student massacre of Tlatelolco in October 1968, as well as numerous and recent violent episodes like the Acteal Massacre in 1997 and the deadly clashes in Atenco in 2006 and in Nochixtlán in 2016, to name a few.