Beauty vloggers—mostly young and femme-presenting—appear to be strangely vulnerable to spirit possession, ghost hauntings, and more. While casually applying their primers and concealers they tell you how clothes disappear from their closets, how they wake up at 3am to strange noises, and how their dogs’ behavior takes strange turns. It all gets even more eerie when they attempt to share their stories with the YouTube community: their memory cards disappear “for no apparent reason” and “unexplainable” glitches ruin their raw files. Plus-size model and makeup-lover LoeyLane admits, after a couple of panicked side glances, “I feel like I shouldn’t even be talking about this.” In another video, she exclaims, “You guys, my makeup blender literally disappeared mid-makeup tutorial!” 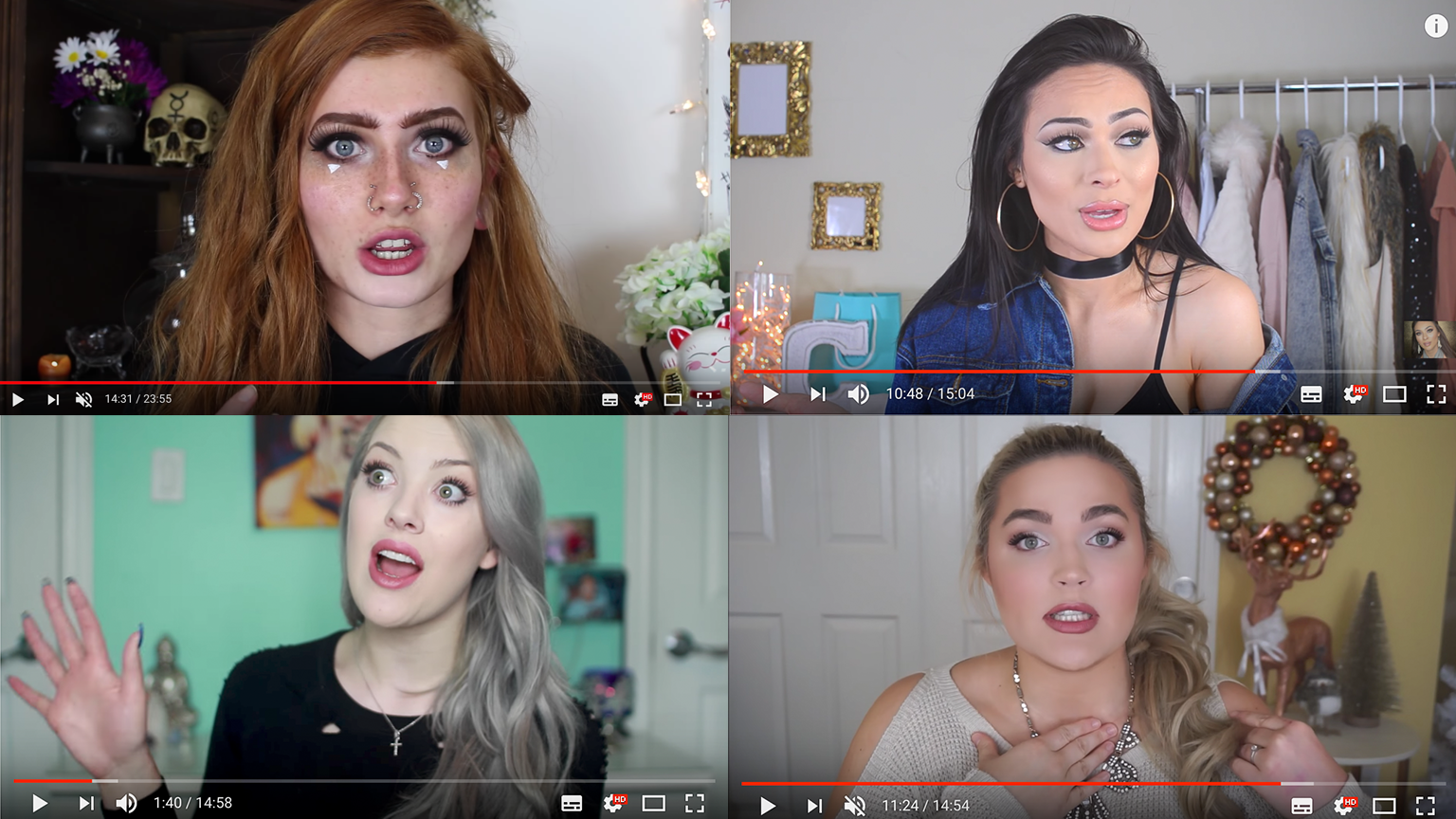 There are hundreds of 200,000+-subscriber vloggers, mostly ostensibly focused on beauty and fashion, who tell stories about their haunted apartments and possessed Uber drivers in these “paranormal storytime” videos. Once vloggers make a turn towards paranormal topics, viewers seem to request more of such content, to the point where some beauty vloggers’ original focus on makeup and skincare recedes into the background as they film more and more haunted scenes. 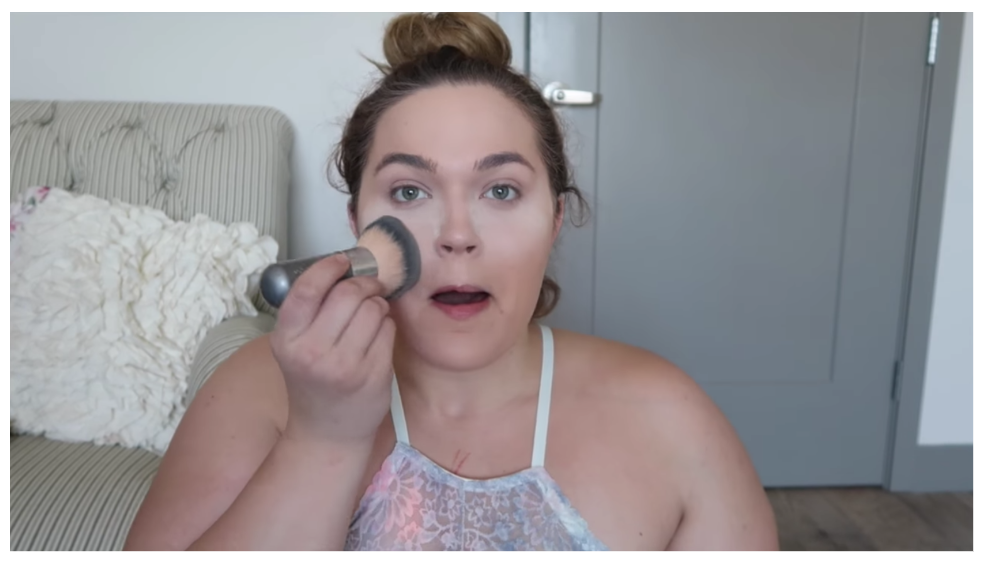 Given the rampant misogyny of social media, the particular toxicity of YouTube, and the suspicion with which the topics of cosmetics and the paranormal are viewed, these videos become an especially popular target for hateful comments.

However, paranormal storytimes constitute a genre with its own tropes, stylistic devices, and social function. They can be seen as an updated form of gothic fiction, sharing key aspects of the long-standing literary genre: unreliable but perceptive female characters, the romantic equation of emotion and reason, and the uncanny melding of the old and new. And just as gothic fiction historically manifested broader anxieties about the effects of technological progress, the paranormal storytimes can be understood as expressions of the anxieties surrounding social media’s increased role in social life.

Bram Stroker’s Dracula exemplifies the blend of modern technology and mysticism in gothic fiction, as a story set in an ancient castle inhabited by mythical creatures, yet full of modern technology such as typewriters and recording machines. As John Bowen argues, “There is a strong opposition (but also a mysterious affinity) in the Gothic between the very modern and the ancient or archaic... Ghosts, like gothics, disrupt our sense of what is present and what is past.” This parallels the stories of ghosts that destroy flash drives, or Loey Lane’s accounts of arranging a ghost encounter with the help of a “Ghost Finder App,” or buying her “Ouija Board” at Wal-Mart. This incongruity is the latest manifestation of a long-running literary trope.

The paranormal storytime videos are organized around a narrator who faces unseen dangers and is in need of rescue, a classic Romantic figure. In many of these videos, it is a sudden feeling of cold that indicates a supernatural presence. Narrators often show the goosebumps on their arm as “proof” of the supernatural encounter, as Salice Rose does in MY GHOST EXPERIENCE!! #Storytime.  In MY HAUNTED HOUSE STORYTIME (PART 1) Christine Di Amore retells her mother’s account of being attacked by an invisible entity. She doesn’t see anyone, but hears footsteps, feels the sensation of touch on her skin. At other times, the vloggers experience pains in the chest, difficulties breathing, and nausea—symptoms which are attributed to the paranormal.

The epistemically questionable source of this evidence of the supernatural helps characterize the vlogger as particularly sensitive, if not quite believable. In her video Something REALLY scary & Paranormal JUST happened, Hailey Reese reports seeing the same man that almost crashes into her car in her dream the previous night. “I turn to look, it’s the guy from my dream. Like, he’s wearing the hat, he’s wearing those sunglasses and like he looks the same from the dream.”

Reese is a classic Cassandra figure, who suffers from disturbing visions but is belittled or ignored as a hysteric. Her childlike innocence, kindheartedness (“Don’t forget my loves, do everything with kindness”), and creativity are also reminiscent of a related female character particularly prominent in gothic fiction: the Ophelia, who descends into madness, often as a manifestation of rapid social changes.  Take a look at the lyrics of Reese’s jingle, once again confirming her inclination towards scientifically shaky arguments: “If you close your eyes and you open your mind (...) you see it all.” 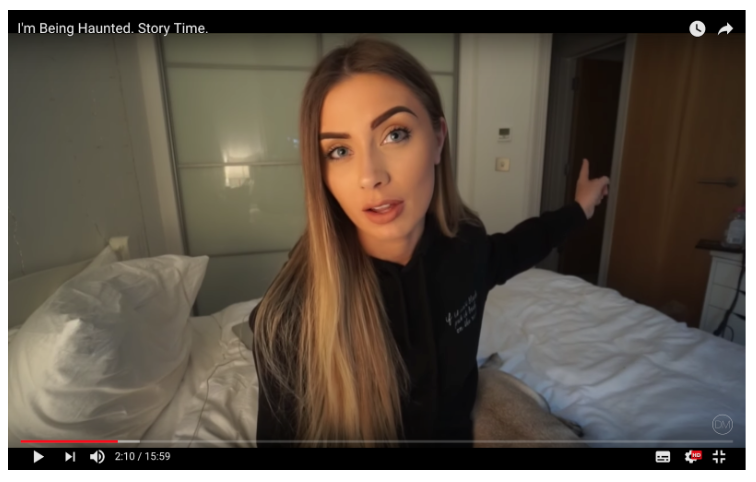 While Cassandra and Ophelia figures have long been regarded as unreliable or mad, their predictions are often ignored at one’s peril. As David Leverenz argues, “there are many voices in Ophelia’s madness speaking through her, all making sense, and none of them her own. She becomes the mirror for a madness-inducing world.”

The narrators often describe an undeniable, lurking presence: “You know the feeling when something is staring down your neck? That’s what it feels like right now.” This unseen presence could be a manifestation of social media’s pervasiveness more generally, but in the paranormal storytime, it is linked in particular with stalkers. In one of Tana Mongeau’s storytimes, she speculates on the link between otherworldly and earthly hauntings: “It was always like, ok that’s super weird, almost paranormal, but did my stalker do it cause he was doing all that kind of stuff to me—whatever.”

Tana Mongeau, Answering YOUR Questions About My Stalker, 2016.

Hailey Reese, My Stalker Broke Into My House WHILE I WAS HOME!!, 2017.

The vloggers convey a feeling of peril through nervous side glances. In agitation, they may interrupt their own stories by wincing at noises in their surroundings and pointing to the outside of the frame while delivering lines like “I feel like there’s someone there, watching.” In the absence of any other cast members, that outside presence can be understood to include the viewers in the comment section.

Thus, the viewer is implicated as a potential cause of paranormal danger—after all, the video is made for their consumption, and the production of the video seems to heighten the ghostly activity. “I’m not even joking something doesn’t want me to film this video,” reports Harmony Nice. She claims her computer has “weird glitches” and her memory card disappears whenever she tries to talk about the paranormal. Christine Di Amore addresses technical malfunctions by inserting slides into her video, commenting on the role of the paranormal in the unusually difficult post-production.

Further, viewers may present a more concrete threat to the vloggers if they are trolls or stalkers. This threat can be glimpsed in the comments accompanying each video and in linked response videos, where other users blame the heavily contoured content creators for being irrational and unoriginal. “There is no scientific evidence for what you’re saying,” claims the enraged host of dubious info-channel No-bullshit-TV. Youtubers are blamed for letting their feminine appearance inhibit the production of qualitative content. “You’re getting hyped because you’re cute, it’s not your content or your personality.”  They are accused of using worn-out strategies to clickbait and scare a young and naive audience: “They use this trope to scare people.” Moralist and dogmatic views like this fill their reviews. A fan concludes in a particularly chauvinistic tone in the comments:

On the other hand, the vlogger also appeals to the viewer as hero(ine). When reporting about her dream-reality coincidences, Reese addresses the viewer directly: “Feel free to decode this with me, you guys, to find out what’s really happening,” she says. Inviting audience participation may be a strategy for heightening traffic on her channel, but it can also be understood in relation to the function of gothic fiction, in which the codified sharing of fears and problems has long been a collective experience. Just as the main character in Jane Austen’s Northanger Abbey finds pleasure in the collective consumption and discussion of ghostly tales, the viewers of the storytimes share their own experiences in the comments, voice their concern for the protagonist, and project their own fears and anxieties on the vague but allusive stories.

Literary scholar Kelly Hurley views the gothic as an “instrumental genre, reemerging cyclically, at periods of cultural stress, to negotiate the anxieties that accompany social transformations and crises.” Be it the renegotiation of late-Victorian masculinity in Oscar Wilde’s Picture of Dorian Gray or Frankenstein’s critical implication of the “taboo of male creation,” gothic fiction attempts to handle the anxieties surrounding societal change. The intrusion of social media into social life could be seen as such a source of cultural stress. It’s possible to view the paranormal storytime as a negotiation of internet-induced anxieties about “presence” in the virtual and the material world, about seeing and being seen, feeling and making felt, and the vulnerability this imposes. It is a collective exorcism of internet culture demons, a fantastic solution to an equally fantastic problem.