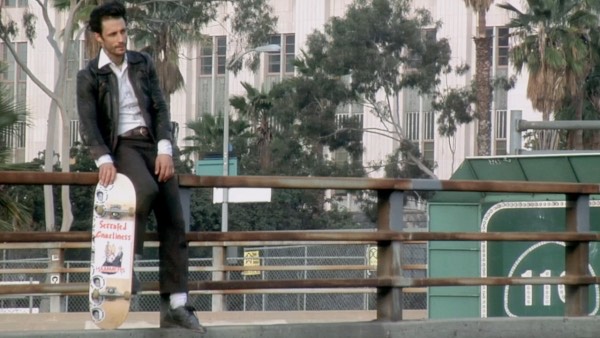 In The Decade in Internet, artists and writers reflect on their favorite moments from the 2010s. Most recently, artist Dena Yago gave us her top picks from her online travels in trend forecasting. Next: artist Parker Ito on his favorite skate videos. Read the full series.

I fell in love with skateboarding in 1996 and stopped pursuing it around 2005 when I became interested in pursuing a career in art. After 2005 I barely followed any kind of skateboard media, with the exception of maybe watching a couple of skate blockbusters a year. This continued until around 2014 when I became interested again, largely due to the influence of Instagram. Today, even though I’m not really skating anymore, I consume more skate content than I ever have in my life. These are my 10 favorite videos/parts from the last decade.

TBH the skate video market is  oversaturated and a lot of companies put out videos of little consequence. I‘ve found that the switch from predominantly VX (mini DV) cameras, to HD in the mid 2000’s not only looks bad, but feels bad as well. It’s getting harder (or becoming rarer) for skate companies to establish a unique video aesthetic . FA / Hockey have managed to. I love this video. Even though it’s even shot in HD, it feels raw in the way that videos shot on VX felt. The skating is also great. Andrew Allen is  an inspiration.  He’s outside of the age bracket where skaters are considered in their prime, but he is still skating like he’s young. This video also introduced me to Ben Kadow.

I could write a whole essay on why I think Palace is interesting, but in short I think they created something iconic. While the myopic, California-obsessed, skate world was putting out overproduced, emotional, HD videos, a small English company was shooting relatively unknown skaters on janky hi 8 cameras and making video edits with UK club music,  a soundtrack that still confuses most Americans to this day. Palace internationalized British skating and helped decentralize the industry from its locus in California. “Palasonic” is the company’s 2017 magnum opus (shot on Beta cam) but I prefer Shawn Powers’ “Welcome to Palace” part–even though Shawn’s from NY, skates only NY spots and I’ve just gone on about Palace and English skateboarding. There is one main reason I chose this video: Shawn Powers skating Soho after Sandy. I was in NY when Sandy hit and lower Manhattan was devastated and noticeably cleared out. Who would have thought while the city had just been washed by the storm Shawn Powers was in Soho skating all the spots that could never be skated because you get hassled or the streets are too crowded with people?

Is Jim Greco an iconoclast? An artist? A misunderstood genius?  These are the questions I ask myself. Like Prince, there have been many shifts in style in the life of Jim Greco. This chart explaining some of Greco’s phases is a wonderful educational tool:

I don’t really have much to say about this skate video (is it even a skate video?!) other than that the skating is great, the music is great and it is unlike any skate film I have seen before. Thank you, Jim Greco.

Like most industries that package media as their main commodity, over the last decade Instagram has had the greatest impact on the production and format of skate videos. Jenkem wrote a great article about it, so I’m just going to defer to them.

Reynolds filmed this part when he was 30. This part is one of the greatest achievements in skateboarding by one of the most influential skaters.  Compared to a decade ago, what skateboarders can physically perform has become so extreme that nothing is remarkable enough to truly shock anymore. But watching this part for the first time I remember being genuinely floored by the limits to which a human body can be pushed.

This part is probably on everybody’s list. It’s great. RIP Dylan. On a personal note, the last trick in the part–a 5050 on a long rail–takes place at a now-defunct gallery where my girlfriend and I worked on our first show together, before we started dating.

Sometime in 2014, the Berrics dropped a Welcome skateboards “United Nations” part. I have no idea why but it has been deleted from the Berrics website and I can’t find the video online anymore. While searching for the Welcome part a couple of years ago, I stumbled upon a 45 minute collection of unedited footage on Youtube titled “Skate Jail” that documents the Welcome team at the Berrics. This video encapsulates what skateboarding is all about: hanging out with your friends, doing stupid shit, skating all day and night, and drinking disturbing amounts of Mountain Dew.

Jacob Harris is one of the best videographers  working in skateboarding. Isle skateboard’s “Vase” video is when I first became familiar with Harris’ work. In the ongoing Thrasher series “Atlantic Drift”,  he often works with his best mate Tom Knox, which is a magical combination.

This video re-established Supreme as a skateboarding brand, years after it had detached from these origins and become a hypebeast juggernaut. The video also introduced the world to Tyshawn Jones, Sean Pablo, Sage Elesser, Na-Kel Smith, and Kevin Bradley; and made every kid at the skatepark start wearing converse. Dylan Rieder skating to INXS’ “Never Tear Us Apart” is sublime.

Parker Ito is an artist based in Los Angeles.