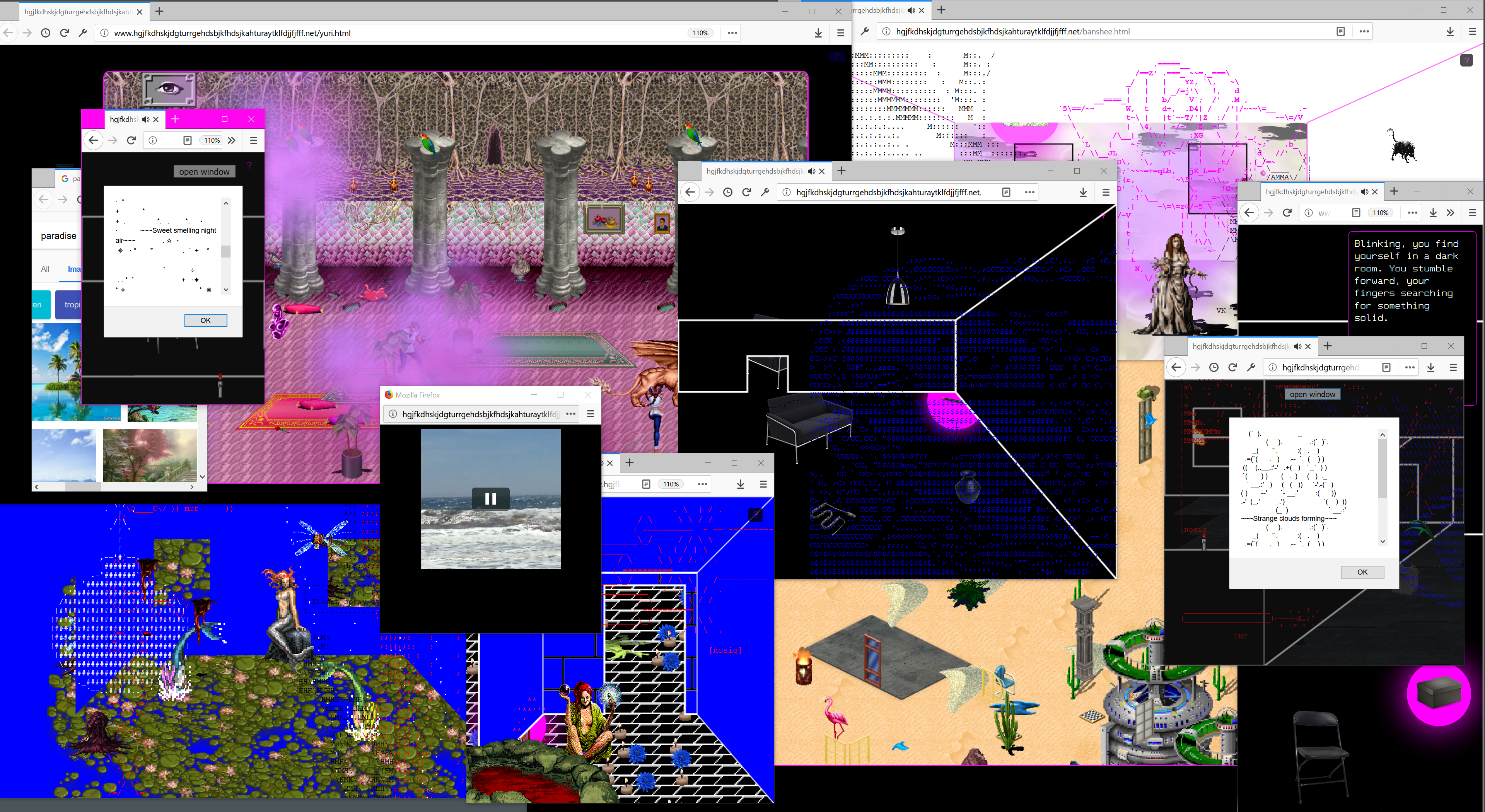 At long last! The time has come to announce the recipients of this year’s Microgrants. Just as we did in 2017, we invited applicants to submit proposals in three different categories. This year’s categories were Net Art, Virtual Reality, and Poetry. Three separate juries led by Rhizome staff members deliberated painstakingly for weeks and their selections are as follows. Congratulations to all the awardees and our gratitude to everyone in the Rhizome community for their great care in putting together proposals this year. 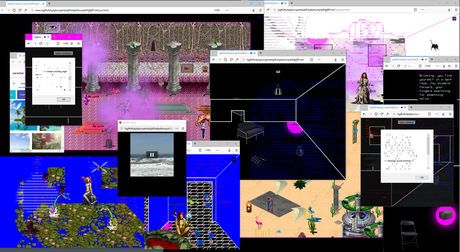 “Black Room is a browser-based, narrative game about an insomniac falling asleep on their computer, on the internet. It’s meant to played late at night. Progression through the game happens by resizing the browser it’s played in—which transforms the browser into a controller. Only through making the browser very small or oddly elongated can hidden secrets and doors to other rooms be found. The url is a string of 28+ random letters, an unmemorable URL. This requires it to be passed from person to person, copied and pasted directly, like an intimate secret, a response to SEO, ‘whisper networks,’ looking for safe places under the web’s public eye and the experience of being a woman online. It’s a feminist dungeon crawler that features a cast of vintage video game sprites, ripped directly from their arcade/console cards, and seeks to bring them together to form new, resilient narratives, as an antithesis to the hyper-sexualization/glorified sexual violence originally imposed on them.” 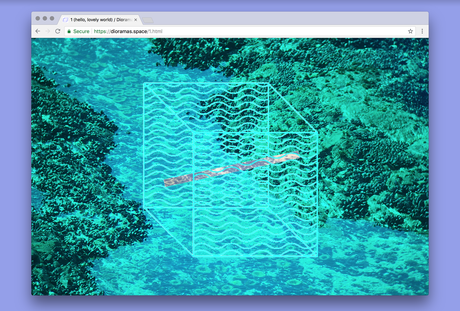 “I’m applying for a grant in support of my ongoing website, dioramas.space, about seeing and being seen by the non-human world and connecting my emotional landscape to the exigencies of climate disaster. I made this platform to facilitate quick generation of pages (dioramas) and am continually developing it.

The impetus is threefold:
- Post-Newhive I wanted to secure a net art venue;
- I visited Michael Heizer’s Double Negative and, bothered by its geological machismo, I became interested in the feminist practice of maintenance. I want my work to embody the act of tending;
- A diorama contextualizes the browser as a container to depict the observed world. I like aesthetic containment. Natural history museums, though problematic, inspire me. A GIF recapitulates the cycles of the Earth and its ecosystems. It’s degraded but flexible. It implies a timeline with infinite ends. (An earlier iteration of my dioramas is here.)” 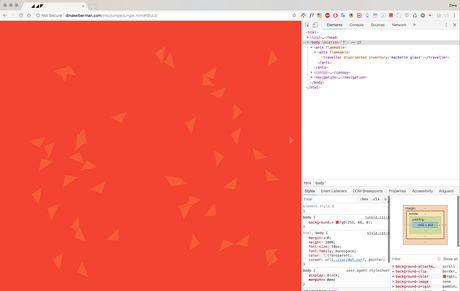 “Into is an experimental browser game in which the player engages with the code itself via the developer tools. Meant to reward inspection (literally), Into starts small and grows from fantasy text RPG to postmodern interactive artwork. The game references top-down RPG & interactive fiction predecessors like Zelda, Candybox, and The Hitchhiker’s Guide to the Galaxy within a sparse minimal aesthetic.

In my past work with web-based ARGs I was thrilled to realize that players were immediately viewing the source code in their exploration.  Since then I’ve been fascinated by the idea of using intentionally viewable code as a medium for artworks. My Web Poems series has explored this on a small scale. With Into I want to go further by integrating interactivity and narrative.

The element inspector is a ubiquitous tool for so many, yet is rarely seen a creative platform. I think this work will be exciting for the coding community to engage with and I am excited to continue to develop it.” 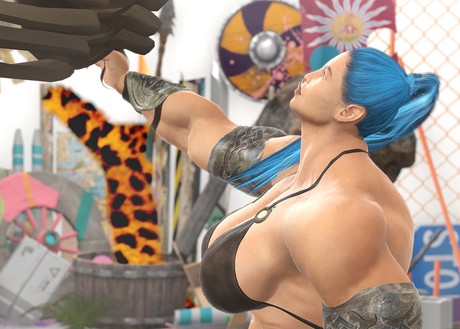 “Studio Visit 360 is a site specific mixed reality installation that premiered at Meredith Rosen Gallery in NY on April 2018. In this new body of work, the gallery space is reimagined as the artist’s own virtual studio. He embodies an Ork avatar, who uses digital tools to create 3D forms, a process that is recorded through DIY Motion Capture. The Rhizome microgrant would be used as a good excuse to document the virtual scene and present it to a broader audience through the First Look app as a standalone piece.” 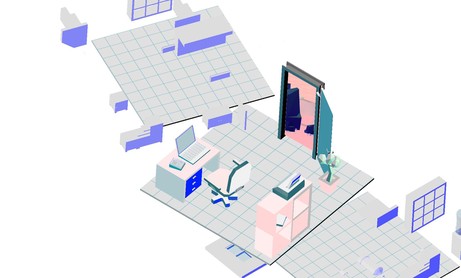 “Guided Meditation is narrative about contemporary labour, disguised as a VR mindfulness application… The game is an ongoing project of the collective practice of Tough Guy Mountain, post-secondary instructors teaching from the intersections of art, labour, and emerging technologies, developing games as immersive critical commentary.” 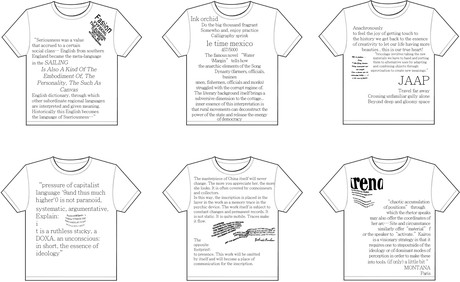 “Shanzhai Lyric is an ongoing inquiry into global logistics and linguistics taking inspiration from the experimental english of shanzhai T-shirts to pursue a larger aesthetic strategy of apparent nonsense as a way to disrupt the relentless forces of commodification and make space for hybrid, liminal and illegible futures.” 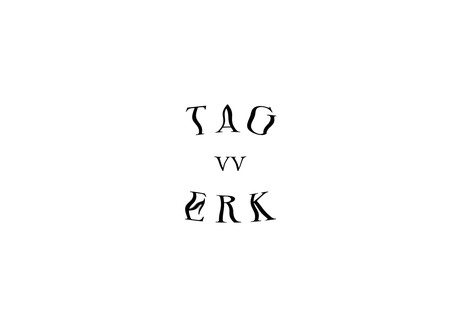 “Since 2014, Tagvverk has sought to publish innovative poetry, art, and other textual/digital experiments. We are seeking financial support to launch a new website, and transfer our archive of almost 100 posts from an incredibly limiting and user-unfriendly Wordpress site. We would ideally work with an independent web designer who can incorporate their creative vision in the new site. Additional funds would help continue the Torf microgrant project, which was paid for out of pocket by the editors in its previous incarnation. With this monetary assistance, we will continue to invest in important contemporary poetic voices, including forthcoming works from Valerie Hsiung, a conversation between Saretta Morgan and Benjamin Krusling, and a new series of curated editions involving interactive content.”

So You Want to Make a Secret War
Bryan Thao Worra 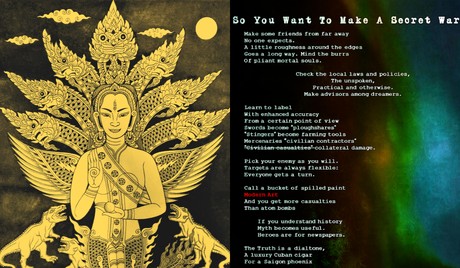 “I wish to create an interdisciplinary, interactive pop-up poetry exhibit probing the poorly understood Laotian Secret War (1954-1975) incorporating original experimental art by elder traditional masters, archival photographs, and modified Southeast Asian shadow puppetry with my verse to expand how we express our journey 45 years later. Laos is still 30% contaminated by Vietnam War bombs and fewer than 15% of Lao refugees in the US graduate college. Many cope with multigenerational PTSD and poverty. Held in a community & handicapped-accessible space in MN (3rd largest Lao refugee population in the US) this breaks new ground bringing our stories back to ourselves over 3 days so my audience can at last take their own pace and time to engage with their memories of the conflict and its aftermath. As a low-income poet with disabilities, this is vital to me that they can read, hear, feel, or watch the poems in a variety of ways, even across language barriers to explore our diaspora.”