Get Off the Internet!: Zach Blas's Contra-Internet Inversion Practice #1
By Robert Leckie 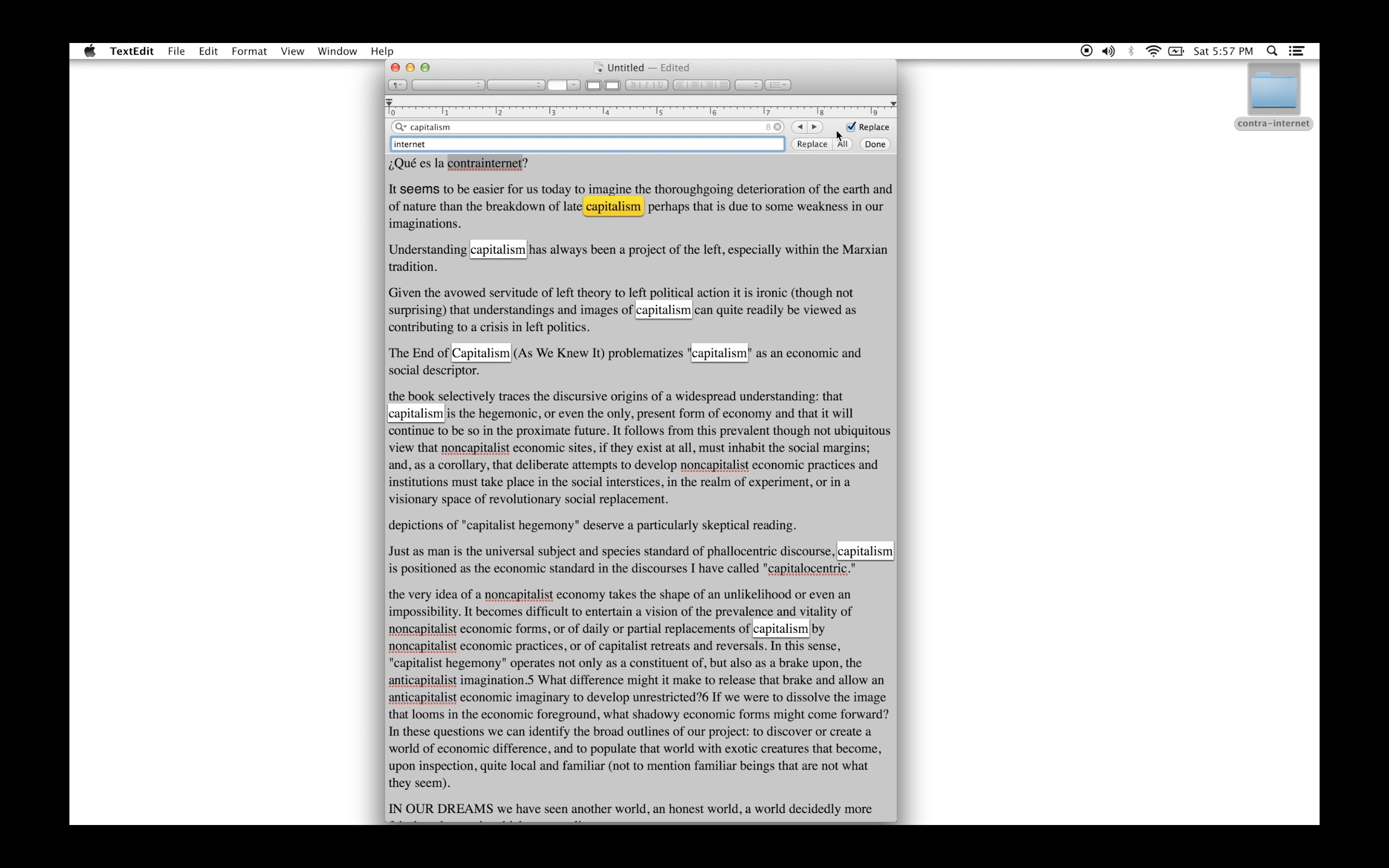 This article accompanies the inclusion of Zach Blas's Contra-Internet Inversion Practice #1: Constituting an Outside (Utopian Plagiarism) (2015) in the online exhibition Net Art Anthology.

Zach Blas’s six-minute video Contra-Internet Inversion Practice #1: Constituting an Outside (Utopian Plagiarism) (2015) falls midway between a YouTube tutorial and what became a key trope of artists’ moving image circa 2015: a screen-capture video in which an off-camera user navigates a range of content in real time across various programme windows. The long title belies a remarkable economy of means. Compared with the audio-visual pyrotechnics of, say, Camille Henrot’s Grosse Fatigue (2013) or Yazan Khalili’s more modest exploration of facial recognition technologies in Hiding Our Faces Like a Dancing Wind (2016), Blas’s tools are far more rudimentary: four PDFs, a TextEdit file and a single song played from iTunes. That a generalised, hyperbolic fascination with surfaces, corporate aesthetics and information networks characteristic of so-called ‘postinternet art’ is substituted for such simple instruments seems to be precisely the point.

Like a YouTube tutorial, Contra-Internet Inversion Practice #1 demonstrates how to perform a task with limited means. In this case, Blas offers up an example of how to mobilise against the internet using the pre-installed software on a MacBook. This is done by copying and pasting together a “contra-internet manifesto” from PDFs freely available online. Through this strategy, which updates William Burroughs’s cut-up technique via the writing and “tactical media” art of Critical Art Ensemble (CAE), the work demonstrates the value and urgency of plagiarism with intent. As CAE write in their seminal text “Utopian Plagiarism, Hypertextuality, and Electronic Cultural Production” (1994), referenced in Blas’s title: “At present, new conditions have emerged that once again make plagiarism an acceptable, even crucial strategy for textual production. This is the age of the recombinant: recombinant bodies, recombinant gender, recombinant texts, recombinant culture.” Two decades later, it is a comparable faith in the radical potential of recombination that Contra-Internet Inversion Practice #1 seeks to demonstrate. It asks: how can existing tools and knowledge be recombined in order to begin to resist the creeping totalitarianism of the internet, or otherwise imagine alternatives to the network form? 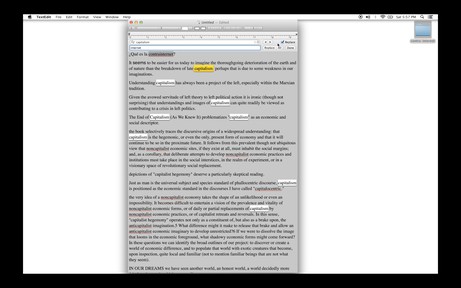 still from Contra-Internet Inversion Practice #1: Constituting an Outside (Utopian Plagiarism), 2015

Right from the start, the unassuming backdrop of the computer desktop hints at the staging of the work: the only icon is a folder named “contra-internet”, and the background image is all-white apart from the word “internet”, which is struck through in small, black, sans serif font at the centre. A few seconds in, the mouse opens iTunes and plays the first track from the pre-prepared ‘contra-internet’ playlist: Le Tigre’s “Get Off the Internet” from 2001, an upbeat call for activists to close their web browsers, sign out of their computers and return to real life protest. As the upbeat drums and synth start to build momentum, iTunes is minimised and TextEdit opened. Four PDFs are then launched from a subfolder.

The first of these texts is philosopher Paul B. Preciado’s Manifiesto contrasexual (2000), from which the title of the first chapter — “¿Qué es la contrasexualidad?” — is copied and pasted into TextEdit. This is followed by a sadly still prescient quote from political theorist Fredric Jameson’s The Cultural Turn: Selected Writings on the Postmodern, 1983–1998 (1998): “It seems easier for us today to imagine the thoroughgoing deterioration of the earth and of nature than the breakdown of late capitalism; and perhaps that is due to some weakness in our imaginations.” The third and most heavily mined of the four texts is The End of Capitalism (As We Knew It): A Feminist Critique of Political Economy (1996) by economic geographer(s) J. K. Gibson-Graham, from which seven quotes are lifted and slightly reordered. While this is being scrolled through, Le Tigre reach the chorus, in which they emphatically and repeatedly wail, “get off the internet!” 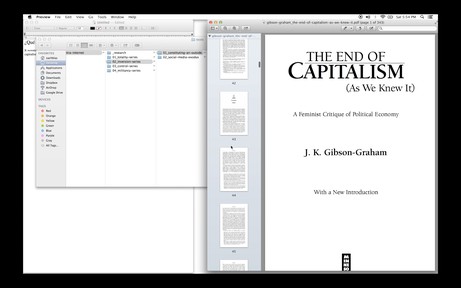 still from Contra-Internet Inversion Practice #1: Constituting an Outside (Utopian Plagiarism), 2015

Drawing this sequence of copy and paste to a close, a final quotation is taken from Our World is Our Weapon (2000) by the Zapatista leader Subcomandante Marcos. It reads: “In our dreams we have seen another world, an honest world, a world decidedly more fair than the one in which we now live.” The evocative tone underlines the revolutionary spirit in which these words were first put on paper, and in which they are being re-mobilised here, out of context and for a different purpose. This displacement may seem naïve, amounting merely to an invocation of imagination and dreams as possible forms of resistance to the crushing hegemony of the internet. Yet in a political climate where these capacities are increasingly under threat from liberal apathy, this demand for radical utopianism also seems refreshing, hopeful and necessary.

Back in TextEdit, all these snippets of text are reformatted to Times font, size 18. Then Blas embarks on a lightning-quick process of find and replace: “contrasexualidad’ for “contrainternet’”; “capital,” “capitalism’” and “capitalist” for “internet”; “anti” and “non-” for “contra-”; “economy” and “economic’” for “network”; and so on. Stitching together a clear rallying cry from such eclectic statements, he demonstrates what contra-internet militancy as recombination might look like in practice. Following these preparations, the Le Tigre track is turned down, having been subtly edited into a Muzak-like instrumental from this point on. The whole text is then read aloud by a generic, garbled, American-accented, female-pitched computer voice for the remainder of the video. The delivery and intonation are clumsy but comprehensible, flattening the fervour that originally clung to these words and steamrolling their emphasis. As the video ends, the TextEdit file is saved as “‘utopian_plagiarism” within a subfolder of the “contra-internet” folder, and the video ends as Quicktime Player’s screen recording function is stopped.

Contra-Internet Inversion Practice #1 is the first of a series of three works, all short, screen-capture videos set to music that use different tactics to abandon or subvert the internet. The second work in the series, Contra-Internet Inversion Practice #2: Social Media Exodus (Call and Response) (2015), shows Blas using Adobe Photoshop to erase images of his own, staged social media posts, Google searches and text messages. Done to the tune of The Cars’ 1981 hit “Since You’re Gone”, these images mostly contain declarations that express resistance to the internet as a legal clusterfuck. They both forcefully demand new rights – “I declare myself an anti-web and worker of the anti-web” – and reclaim the rights that we regularly forgo by signing up to the end-user license agreements that often police access to these platforms.

The third and final work in the series, Contra-Internet Inversion Practice #3: Modeling Paranodal Space (2016), is also the most abstract. It shows the modelling, rendering and eventual fracturing of animated, silver segments of “paranodal space” (the spaces that exist in-between the various nodes of a network) in the 3D animation software Maya. The simulation is based on a low-res image of a distributed network downloaded from Google Images at the start of the video. And it takes place to the tune of Joe Meek’s spacey “I Hear a New World” from the 1991 reissue of his 1960 album of the same name, giving the work a psychedelic quality. Just like the other two videos in the series then, this work proposes a speculative site, if not a means, of resistance to the internet as the dominant network form. For this purpose, music turns out to be just as important a tool as literary, visual and technical scripts: Meek’s longing for alien life elsewhere in the universe becomes a pining for different ways of living and interacting in the here and now.

To keep with Blas’s recombinatory aesthetics, perhaps the best user manual for Contra-Internet Inversion Practice #1 would be one lifted from José Esteban Muñoz’s Cruising Utopia (2009). At the end of the book, Muñoz suggests that his writing on queer utopia “can ultimately be read as an invitation, a performative provocation. Manifesto-like and ardent, it is a call to think about our lives and times differently.” In the same spirit, Blas’s work pitches plagiarism and recombination as necessary forms of collective political action today. It encourages us to begin to imagine, desire and strive for alternative networks that can sustain alternative futures, harnessing the utopianism that is written into the manifesto as a literary form and updating it for the digital age.