To Lose the Scroll is to Lose Your Soul: Presenting Blockedt!
By Eileen Isagon Skyers 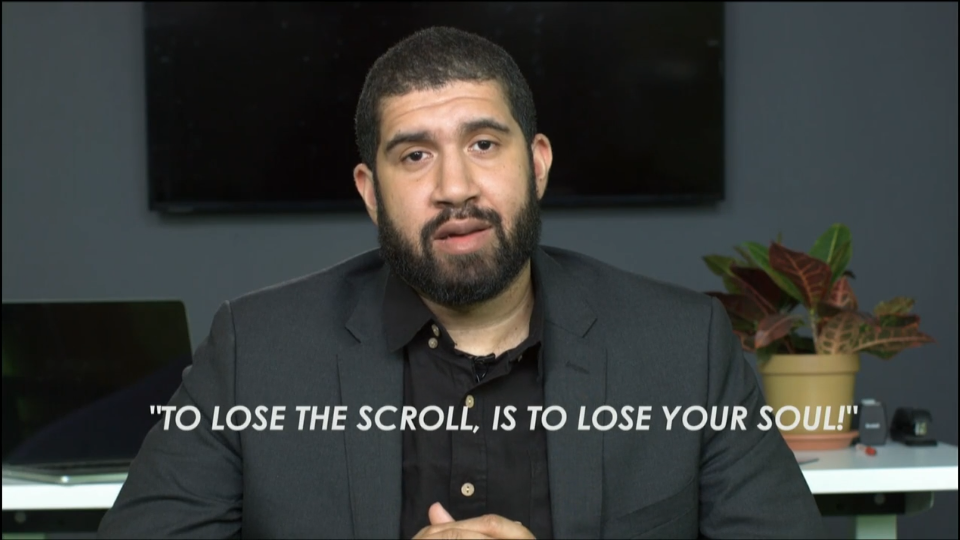 Blockedt! by Jayson Musson and Jonah Peretti is part of First Look: Real Artists Ship, a selection of works from recent editions of Seven on Seven. The Blockedt! iOS app, developed by Noah Keating, is currently under review for inclusion in the app store.

Jayson Musson and Jonah Peretti have created what some would call an anti-social social networking app and, as part of their collaboration for Seven on Seven, produced an introductory pitch video explaining its functionality. The network, aptly named Blockedt!, may well be the first application that has no visible features, no distinct content, and no other visible users, despite its invasive end user license agreement.

It’s not uncommon to come across an advertisement that urges us to take a step back from our devices—to take a deep breath, and embrace the richness of our surroundings, without the need to document, record, or share them. When we look at contemporary life, it is evident that our experiences are frequently punctuated by technology. No one is free from the magnetic pull of social networking. On the feed, companies and users unite in endlessly reciprocal adoration. We’re expected to wake up to our twitterverse, “like” our former boss’s vacation photos, and comment on our distant cousin’s newborn, all the while feeding our every digital motion into an ominous sea of marketable data.

For their Seven on Seven project in 2018, Jayson Musson and Jonah Peretti decided to take a closer look at the imminent digital fatigue that results from social media, albeit from a humorous perspective. The two produced Blockedt, a fully functional application that invites its users to participate in the soothing, meditative gesture of scrolling, while freeing them from the obligation of sharing, viewing, or re-posting any content whatsoever. The app is, essentially, just a blank white screen. Its impractical nature reveals an uncomfortable dichotomy between our basic need for deep human connection, and the basic gesture of touching glass that we habitually engage in on impulse.

Musson and Perretti introduced Blockedt in a stylistically familiar pitch video, aimed at potential shareholders for the app. In the video, Musson takes on the persona of a fictional, buttoned-up CEO named Guy White, who is described only as “Visionary, Not Poor.” Smiling at an office desk, fingers tented, he proclaims, “Technology has had a profound impact upon all of our lives with its immediate interconnectedness. We've become shackled to our timelines. Indentured servants to our smart devices.” He then introduces what he, jokingly, calls an American-sized solution: Blockedt. Blockedt is arguably the world’s first app to openly acknowledge our technology’s addictive qualities. But on Blockedt, the unique experience of social navigation has been reduced to the singular activity of the platform: scrolling.

In some sense, Blockedt is a satirical response to the way that social media has capitalized on our natural need to share content, preying on our human impulses. The app is pending approval by the App Store, but in the meantime users can get scrolling on the web-native app. Because as they say at Blockedt, “to lose the scroll, is to lose your soul.”