Collectable.art by Bunny Rogers and Nozlee Samadzadeh is part of First Look: Real Artists Ship, a selection of works from recent editions of Seven on Seven.

It wasn’t long into my collaboration with Bunny Rogers for Rhizome’s Seven on Seven conference in 2017 when we realized our similarities might outnumber our perceived differences. In our early, wide-ranging conversations, we discovered a shared interest in online anonymity, early internet communities, personal data archives, and certain books we’d both read as kids, to name a few topics.

But the differences remain: I’m an engineer at Vox Media, where I write code for the internal software that writers and editors use to write and publish articles. My job involves balancing the needs of the company at large along with individual workflows, making decisions bolstered by user testing and data. I’m also a seamstress, which I use to experiment with process, automation, and efficiency as much as to make clothing.

Bunny is a multimedia artist and poet whose most recent solo exhibit is up at the Whitney Museum. Her work explores her past and present using a variety of media, from stained glass panels to video art. On her extensive website, she also maintains a variety of hand-coded, single-topic sub-sites: an archive of awareness ribbons; poetry about a Neopets character; a database of lamb headstones, traditionally used for the graves of children.

A social network for one 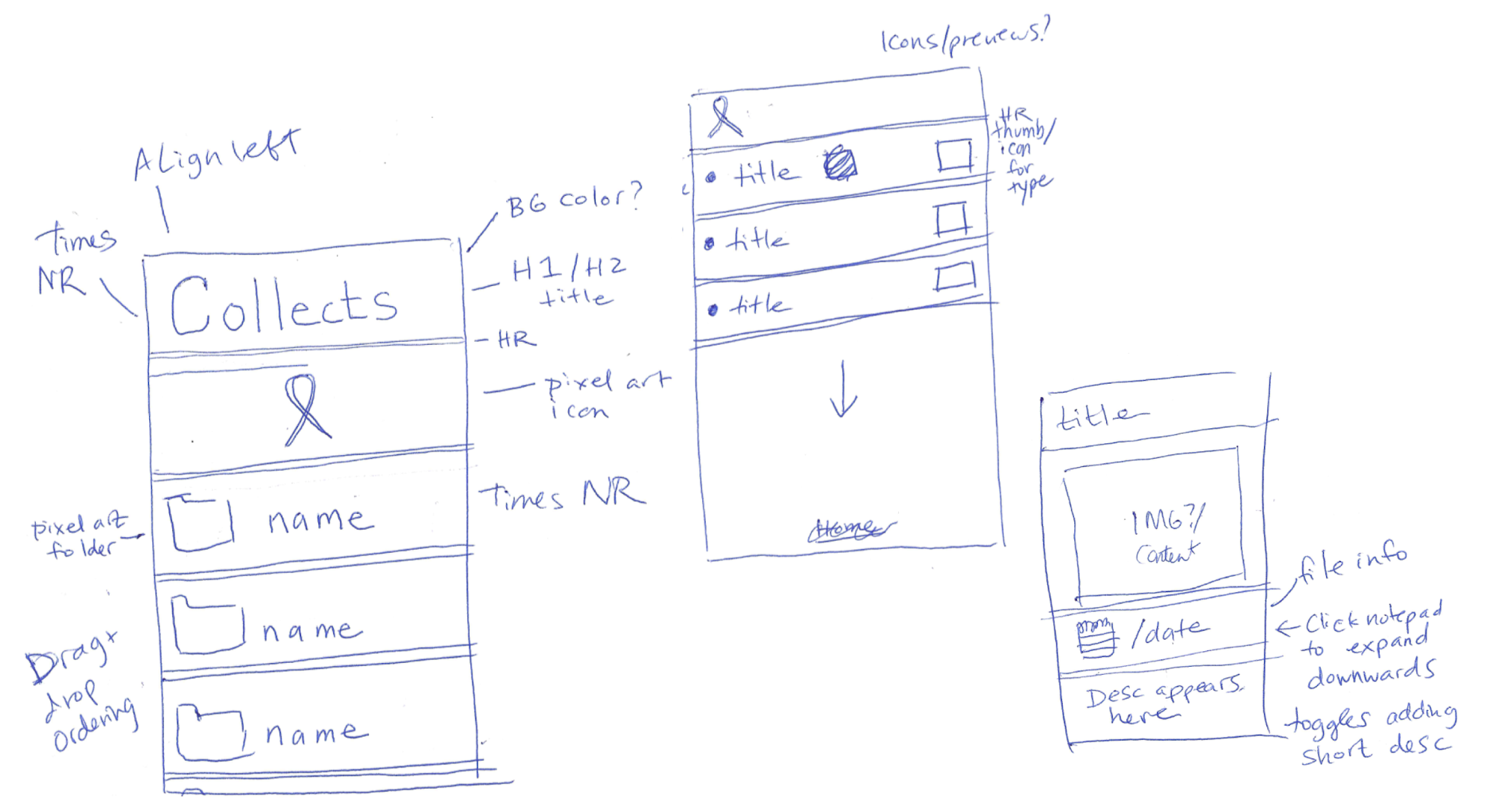 The first sketches of what would become the Collectable.art app

I suggested that we create a tool to allow Bunny (or anyone else) to create, maintain, and display these single-topic sites. The idea appealed to Bunny, who had spoken before about the idea of creating work with a single person in mind. It would be both a far cry from the decision-making consensus of my day job and an automated step beyond Bunny’s hand-coded work.

So instead of thinking about an imaginary generalist user, the app only needed to make sense to Bunny, its intended audience. While sketching our ideas for this tool, Bunny came upon a name—Collectable—and I came upon a tagline: “an anonymized social network in the style of Bunny Rogers.”

Like any social network from Facebook to Twitter, we needed a “private” setting where work is done and a “public” place where work is displayed; I wanted the private view to be limited to your phone to keep it all the more personal. The .ART administrator, which sponsored the 2017 Seven on Seven, generously helped us out with a domain, and so our project was born: Collectable.art is a platform for collecting and sharing text and images via an iOS app and website. 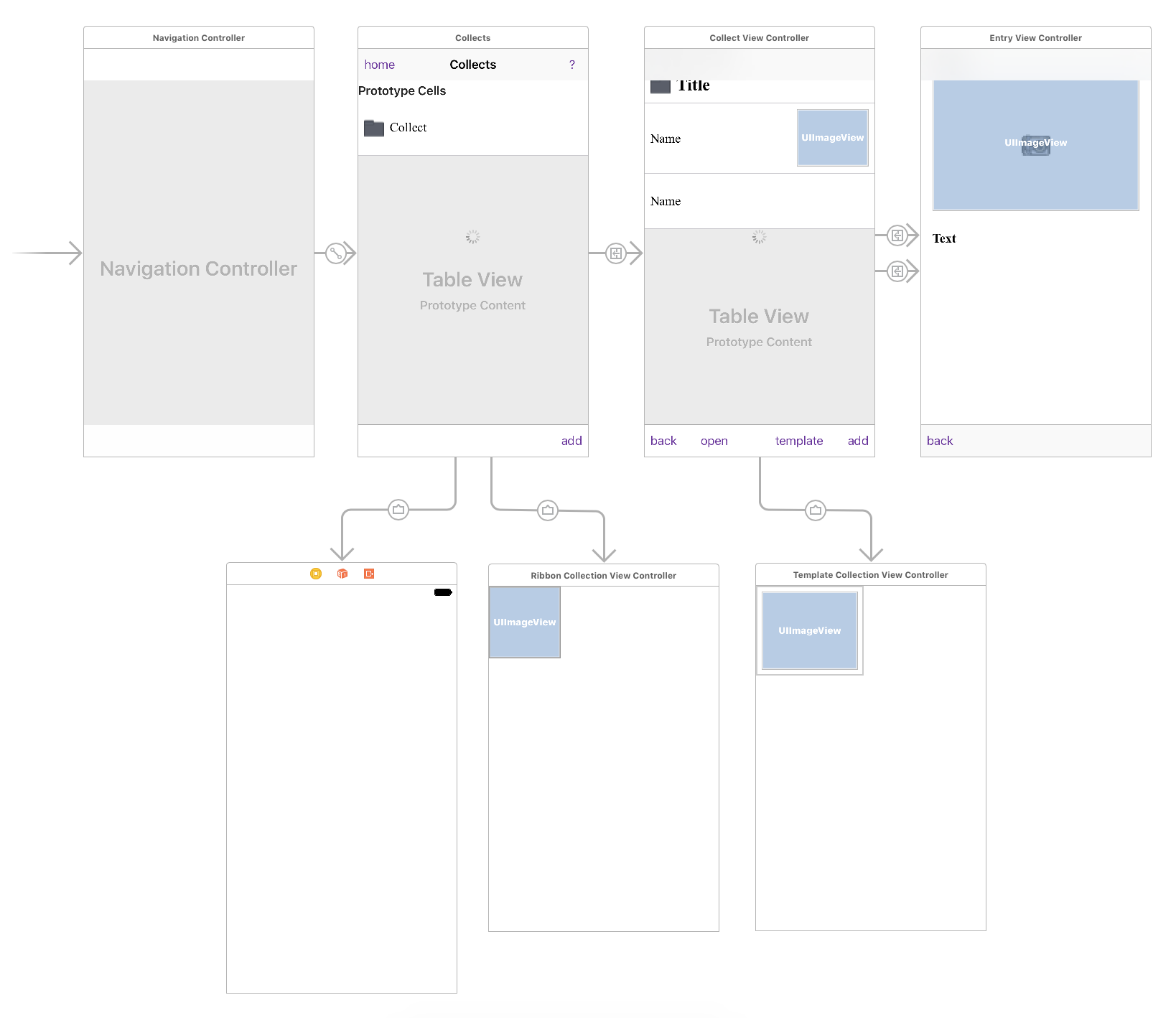 The representation of the app’s interface in Xcode

With only a few weeks in which to work, I had to make decisions about what tools to use in order to complete our project in time. I leaned heavily on Google’s Firebase tools for the app’s database and user authentication, which freed up time to customize the app’s user interface to match the early sketches Bunny and I worked on.

Apple has a lot of opinions about how iOS apps should look and feel—opinions that were not shared by Bunny, whose online work is formatted with Web 1.0 styles like Times New Roman and default blue-and-purple-colored links. Replacing the modern gradients and icons of a 2017-era mobile app was a funny and refreshing challenge; I found myself occasionally going against what I had been taught was “right” for an app, although of course user experience has no objectively correct answers.

We replaced the idea of a user profile with Bunny’s “adoptable” awareness ribbons, which allow unique identification without having an identity connected to the real world. She also created the icons and assets used throughout the app, as well as the web page templates that the user’s collected data slots into.

Both the Swift OS app and the Node.js web app are open source and publicly accessible on Github.

Adding an image to a collect using the app

Using the app, you can create and store “collects,” which are sets of text-and-image pairs. These images can be taken with a phone camera or downloaded from an external source, so the app can be used anywhere. Public collects—it felt useful to provide a way to “hide” work if desired—can be seen on the website. There are nine templates, created by Bunny, that you can choose from to format your data. (Because not everyone can be Bunny Rogers, the app itself also contains help instructions.)

Currently on Collectable.art you can view Bunny’s lamb graves, photos of incorrectly formatted social media icons that I have collected over the years, and more—I even used Collectable.art used to document the Seven on Seven conference as it was happening. More recently, students at PS 317 in Queens have been working on their own collects, including slime/squishy things and noods.

To make your own anonymized collects the style of Bunny Rogers, get started at collectable.art/app.