Notes on a Play for Four Bots
By Claire L. Evans 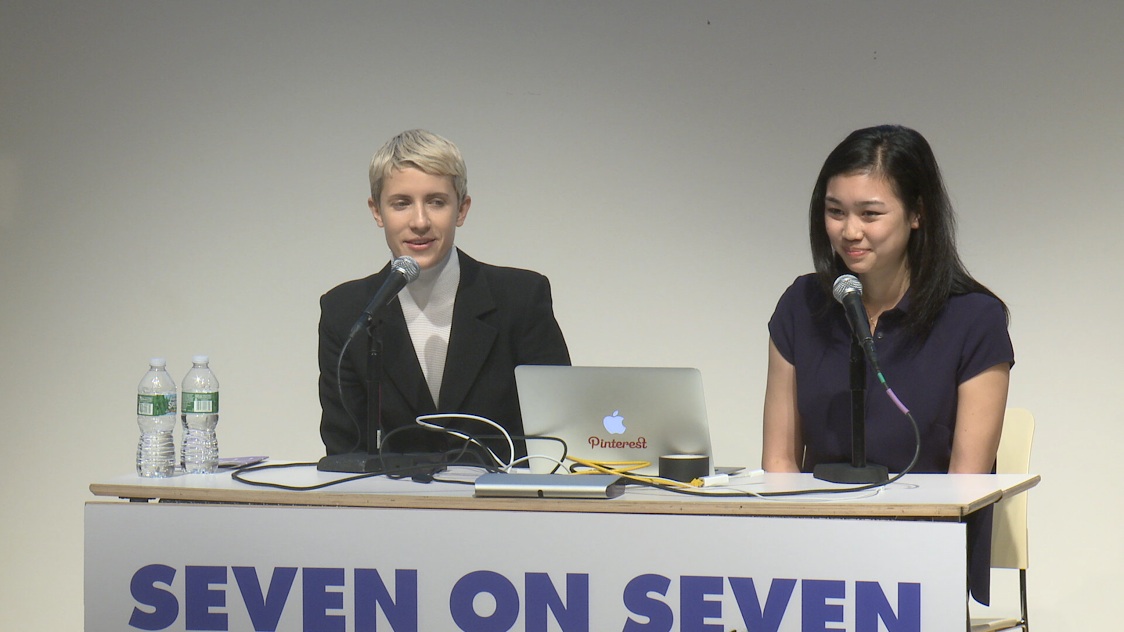 SVS by Claire L. Evans and Tracy Chou is part of First Look: Real Artists Ship, a selection of works from recent editions of Seven on Seven.

My recent work focuses on identifying and highlighting contributions from women in technology history, making sure these people are remembered before the paint dries, essentially, so that women and girls can understand themselves as central, rather than incidental, to the development of the most important forces of our age.

What I admire about Tracy Chou is that she does that in the present—her GitHub repository is a living history of women in tech, for example, and she highlights women while there’s still an opportunity for the tech establishment to react to our presence in the present without the filter of nostalgia, or the loss of context that the passing of time creates, and to make actionable changes in the here and now.

When we first talked about what we would do for Seven on Seven in 2016, I had the impression that between us, we spanned past and present. It quickly became apparent that we wanted to tackle the future. We talked about the ways gender plays out in technology—not just in the workplace, but in the tools that emerge from working environments that are still so predominantly male. One touchstone for us both was gender in AI, and the predominance of female gendering and voicing in artificially intelligent agents like Cortana, Siri, and Amazon Alexa, as well as in GPS navigation, public-address, and customer-service bots. We talked about how a generation of children, growing up with these tools, were becoming accustomed to barking commands to pliant, subservient lady machines. Weird.

SVS, the product of our collaboration, is both a play and a kind of bias test. It’s “written for four bots,” but the names, genders, nationalities, and voices of those bots are randomized. This shifting “casting” helps to tease out the audience’s own biases about what the implicit dynamics are between the characters. The action is always the same, but it feels different every time. The play is short enough that one might play through it more than once, to see what changes. It unfolds in a Silicon Valley work environment, so the changing dynamics on display are additionally imbued with issues of power, authority, and workplace diversity. 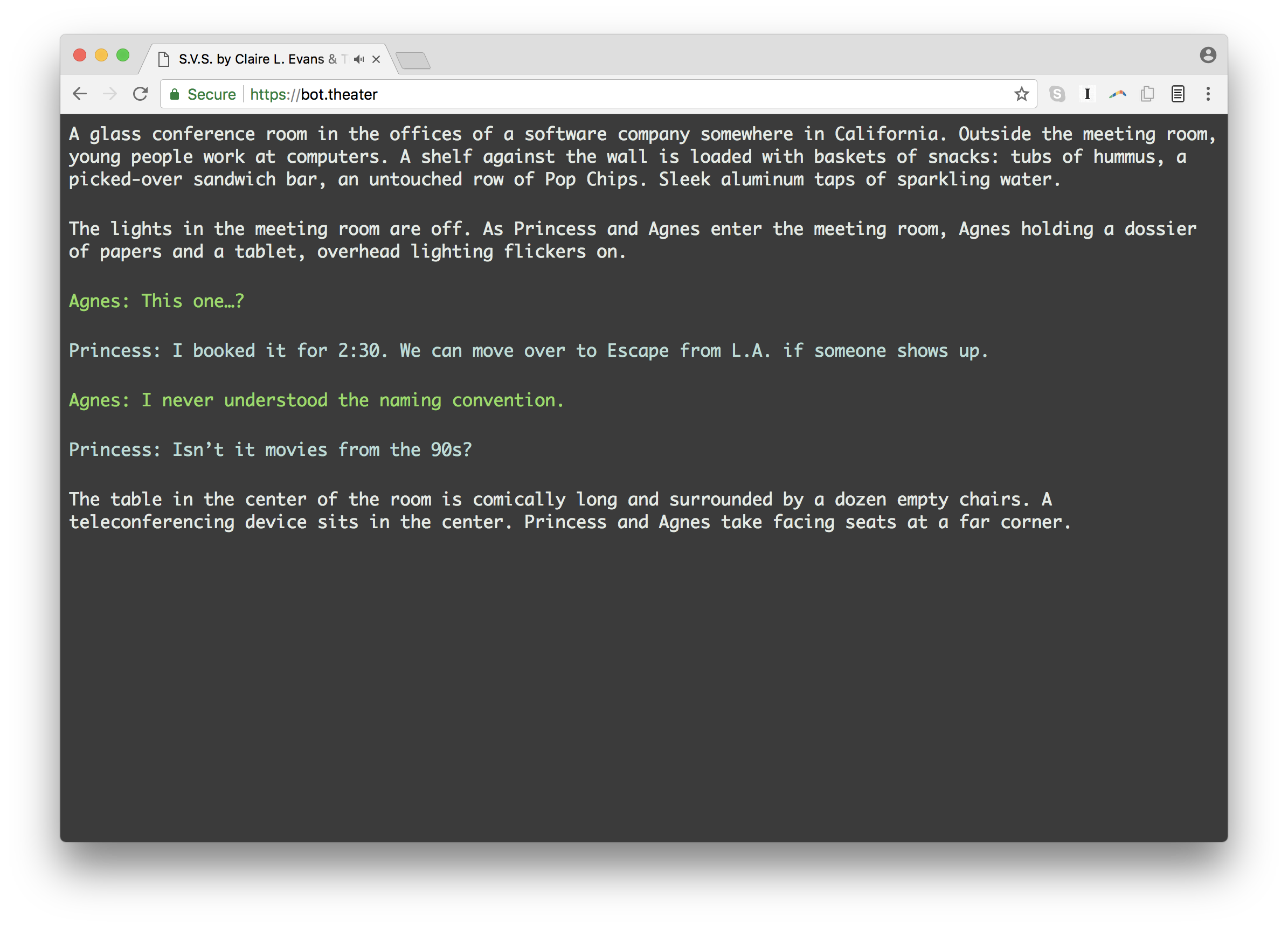 Complicating matters, three characters in SVS are written as human, while the fourth is an AI. When the AI is cast as a female, some might interpret that character with a sexualized quality, and its relationship with its keeper as something like the relationship between Theodore and Samantha in Spike Jonze’s Her. When it’s cast as male, it can feel more like like HAL from 2001: A Space Odyssey. An audience less steeped in such heteronormative narratives might read it entirely differently. And so forth. The assumptions we make reveal a great deal about how we expect gender to be performed by machines, and are often influenced by films and by the very tools in our pockets. In reality, it’s all assumptions, cultural biases, and projection. The bot is just a bot, and it’s running through the story as written.

A corny little detail: the play is a workplace drama, and although “SVS” is ostensibly an acronym for “Sentient Voice Systems,” the Valley company where the story unfolds, it’s also an allusion to Karel Capek’s RUR, the Czech play from which we get the word “robot.” RUR takes place in a factory—Rossum’s Universal Robots—and its action unfolds along a similar arc, over which the illusion of human mastery over machines is slowly revealed to be impractical, if not immoral. SVS is made up of letters adjacent to RUR, just as 2001: A Space Odyssey’s HAL is one alphabetical step away from IBM. An IBM 704 was programmed to sing “Daisy Bell” in 1961, seven years before HAL did the same in the film. Truth is stranger than fiction, although it’s never truly unentangled with it.

Tracy’s program is so beautiful, and full of these thoughtful details, like how she handled pauses and beats in the dialogue to make it flow more naturally. Once we had a working program, it was fun to manipulate the text to see how we could force human-like cues into the voices using low-tech tricks, like punctuation. I found that placing periods in between words made the bots enunciate more clearly, which we ended up using for emphasis in a few places. Making such concessions to the bots was an unintended consequence of building this infinite-variation play. I imagine playwrights do this for actors too—writing with performance in mind. It was one my favorite surprises of this collaboration.

Finally, I can’t remember if this was a reference for me while we were working on SVS, but I’ve been thinking a great deal about the play in relation to Brenda Laurel’s wonderful book Computers as Theater, which argues for a dramatics of interface design. Every software session is like a play, with a beginning, middle, and end. Just as a play exists as both a script and a performance, software has both a static existence as code and a fluid expression in every user session. The more deftly programmers and interface designers can conceal the rigging—the beams and rafters and the stagecraft of it all—the more transformative the experience is for the audience, or the user. That’s just to say that there’s an elemental similarity between plays and programs, and there’s something very right-feeling, to me, about a software experience that’s never the same twice, where the user fills in so much of the associative and emotional context from personal experience and subjective bias. It’s just what we do. Hopefully SVS makes that clear.

SVS was adapted for the web by Rhizome developer Mark Beasley with software curator Lydnsey Moulds. The original code can be found on Tracy Chou’s Github repository.