Landscape Painting
An interview with exonemo
By Lauren Studebaker 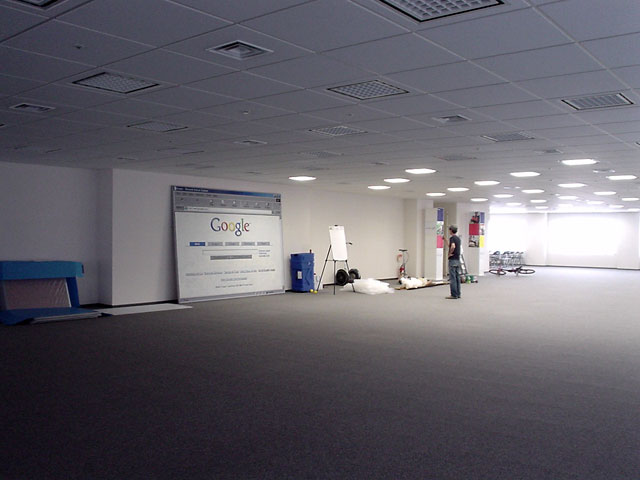 The artist duo exonemo, formed by Kensuke Sembo and Yae Akaiwa in 1996, work with media in a humorous and experimental way to promote “explorations of the paradoxes of digital and analog computer networked and actual environments in our lives.” Their 2004 work, Natural Process, is an “installation hack,” consisting of a hand-painted recreation of Google’s homepage (at the time) displayed in a gallery and then livestreamed into an online exhibition. Today, the work is on loan and online for the first time since 2004 as part of “Open Space 2018: “in transition” at ICC in Tokyo, and on view as part of Net Art Anthology.

To begin, how did the two of you begin collaborating as exonemo? What was the community of artists working with the internet and technologies in Japan like at the time?

Everything was chaotic, so what we were creating was not categorized as art at the very beginning. At that time in Japan, there was no artist mainly working with the internet, except us. In the late 1990s, some collaborative projects with artists, such as “Sensorium” or “Postpet” had come on the internet. And a big anonymous BBS “2ch” had a big influence on Japanese underground communities. In 1999, we met JODI at a restaurant in Tokyo. It was the first encounter with the internet artist in actual space.

How was Natural Process conceived? What was the reasoning for choosing Google’s homepage as the source material of the “landscape painting”?

The idea came up when we had an opportunity to participate in a “contemporary art” group exhibition at the Mori Art Museum in Tokyo. Most of exhibits were painting, photograph, sculpture or installation which could be construed in the context of contemporary art. Therefore, as an alien from the internet, from outside of contemporary art world, we tried to install new reality of the internet era into the museum. Then we decided using a traditional analog media (painting) in combination with a symbolic image of the internet (Google's homepage). At that time in 2004, we had frequently accessed the “Google front page” when searching something. We thought it was a new landscape seen through our virtual “windows.”

In Natural Process, there’s a strong focus on transitions between the digital and analog presence of the landscape of the digital––an “installation hack,” in your words. For you, what occurred in the spaces between these different representations of the webpage?

In the process of continuous transition between digital and analog, we made a situation which would be able to slip some sort of noise or human error. (ex. a painting by painter who was unfamiliar with the Google’s homepage. visitors at the museum had been captured by a webcam set in front of the painting, and a visitor tried to hack it...)

This faulty (we dare say it “natural”) process had revealed gaps between nonphysical and physical media/space clearly.

What differences in reception occurred when the work was viewed online versus in the exhibition space (at the Mori Art Museum)?

People online accessed individually to the digital image from their personal space, but people at the museum met the painting in a public space with many other people.

A digital image had been copied and spreaded on the internet. It brought a personal experiences for people online. On the other hand at the museum, physical painting is one and only, hence people gathered and related to each other in the public space. That was one of big differences between two different spaces.

The artwork is now in Google’s collection–– how did this happen? Do you still see the work as being complete as only a physical object, not livestreamed?

We contacted with Google after opening the exhibition. Then we got a feedback that a founder of the Google saw the livestream and he liked it. Therefore we asked Google Japan if they would like to own the work. They wanted to have it but without a webcam. We wanted to installed the whole system including livestreaming, but it still seemed to have meanings to install even only the painting. In fact, meanings of the painting have been changing along with Google’s growth; thus, the process is still underway. We are glad to be able to present with original installation again after many years.

Since Natural Process was exhibited in 2004, Google’s place in the digital hierarchy has radically changed alongside general human interaction with the internet and its associated technologies. Have you noticed your practice adapting to these shifts?

No. But we chose Google's front page because we usually started "net surfing" from that page and it was necessary for us. In 2004, Google search was the simplest, fastest and had a potential to change the internet  (actually not only the internet), and they still has been expanding their influence. However, their front page will not be chosen as a landscape of 2018, because today we all see different landscapes through individual social media windows.