Who is Jack?
By Molly Lambert

JACK FM is a radio station that broadcasts, according to on air quote, “from a dumpy little building in beautiful downtown Culver City.” It plays from a large but oddly limited database of songs, probably using an algorithm. 93.1 JACK FM LOS ANGELES 2008 by artist Guthrie Lonergan archives the station’s playlists from 2008 by scraping song identifications from a widget posted on the station’s website, which he thought of doing while driving around a lot listening to the station. Driving and listening to the radio are intertwined in Los Angeles, even as FM radio has lost its footing to streaming services and bluetooth, all of which allow the user to customize their in-car listening experience. For the experience of DJ curated music, there is internet radio and satellite. Commercial FM radio meanwhile soldiers on with its formula of regular ad breaks and DJs with personalities but no power over what gets played.

According to Wikipedia, the JACK FM format started in Vancouver, inspired by a Winnipeg station called BOB FM. The format caught on in Canada, spawning a JOE FM and DAVE FM, and was eventually licensed as an American format in 2004. The JACK format purports that one DJ, the fictional Jack, is playing whatever he wants. Whatever he wants to play happens to be the same rigid formula of songs as a commercial classic rock radio station might play, mixed with novelty songs, eighties hits, and a smattering of adult contemporary.

The JACK format emerge at the same time as the introduction of the iPod and iTunes, where randomized segues broke with traditional listening styles. Like the iTunes randomizer, JACK abolishes the idea of traditional DJ segues based on seamless flow. JACK transitions are abrupt, incongruous, and nonsensical. Despite the claim of unlimited freedom to play anything, there are strict limits in place. The musical database JACK draws from is adult contemporary rock, and like any non freeform radio station in the era where megacorporation Clearchannel (now called I Heart Radio) owns most major FM stations, it bludgeons you over and over with the same songs, flattened and compressed to drain them of character, positing that nostalgia is all that matters and repetition is comfort. JACK preys on nostalgia not for the original records themselves, but for these compressed and flattened radio versions. It means to evoke nostalgia for listening to the radio, for driving, for the repetitiveness and flatness of a long commute like the fictional Jack might have to the dumpy office building in Culver City–if such a place even exists, since Jack doesn’t. 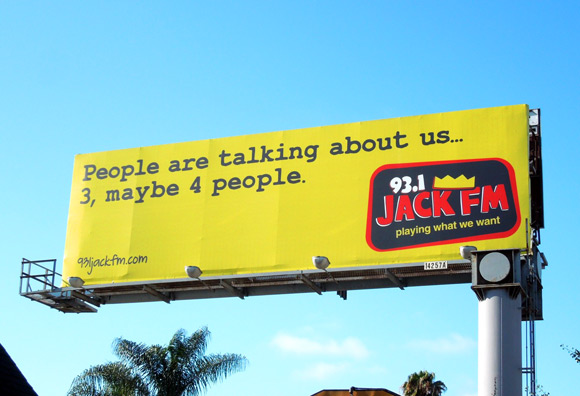 Aside from the image of Jack as the last DJ, a voice actor-soundtracked robot broadcasting from a cubicle in Culver City JACK FM has always conjured up the phantom of Wolfman Jack, the seminal freeform rock n roll DJ who broadcast in the early sixties from a super-powerful FM signal in Mexico that was able to be picked up all over North America. Wolfman Jack’s voice, a sort of chicken-fried rumble, was known to all, but he maintained a public anonymity until later in his career (he appears in 1973’s American Graffiti as himself).

The original radio DJ, like the original internet user, is the introvert turned extrovert encouraged by the promise of anonymity. There was a time when radio existed without television, and a radio personality did not have to be concerned with a visual image, just a voice. And likewise, there was a time when the internet user was not expected to attach their username to a selfie, when internet personhood was defined by its personlessness. Lonergan’s work speaks to the deep feeling of longing that characterizes questing through the vastness of the internet.

Lonergan’s art is often situated from the point of view of a mythical ideal internet user. He collects data and archives pages and media from sites like Google Maps and JACK FM, finding the algorithmic averages of all content as a form of meditative measuring practice. Like Wolfman Jack and JACK FM, Lonergan’s work has an instantly recognizable, faceless voice.

Even within spaces as vast as music, the internet, and Los Angeles, there are patterns. 93.1 JACK FM LOS ANGELES 2008 dares the reader to try to make sense of that pattern, just as JACK FM dares the listener to understand the meaning of its algorithm. After playing only Steely Dan’s “Reelin’ In The Years” and “Do It Again” for the months of January through September, why did JACK suddenly also start playing “Rikki Don’t Lose That Number” starting in October? Was a human somewhere behind some of these decisions? Or was it just another machine, a robotic jukebox arm randomly selecting another single from a digitized copy of Steely Dan’s Greatest Hits? 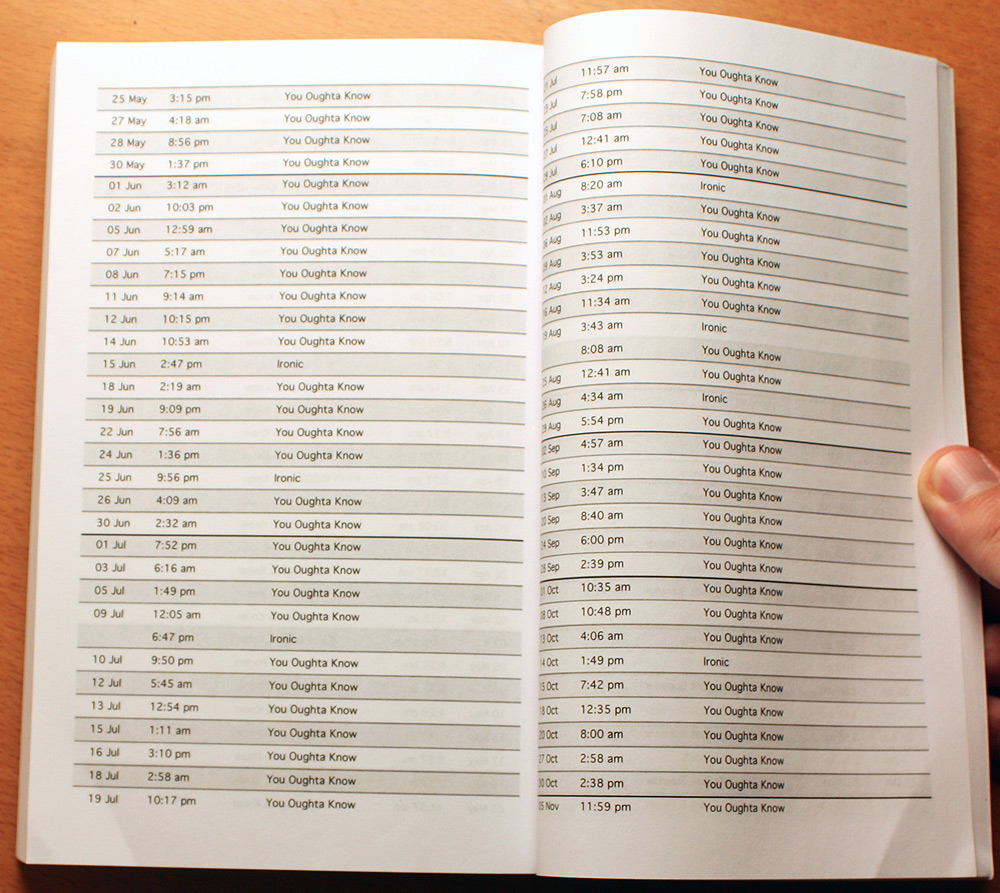 If JACK has a format, it is “Greatest Hits,” but within that there are a lot of inexplicable creative decisions. There is almost no rap, but Tone Loc’s “Wild Thing” and “Funky Cold Medina” make the cut. JACK’s favorite band is probably U2, who are afforded a luxurious spread of thirteen of their biggest hits in the rotation, about half of which come from The Joshua Tree. Whereas regular radio stations present the illusion that the DJ is picking the records, JACK cuts out the middleman and says hey, here is what a corporate robot thinks you, the algorithmic average bro, wants to hear, presented with the voice of a snarky voice actor as JACK. JACK FM knows it is akin to wallpaper music, and that that is it’s comfort. Do you want to hear Thin Lizzy’s “The Boys Are Back In Town” every day around the same time? Everyone does, really.