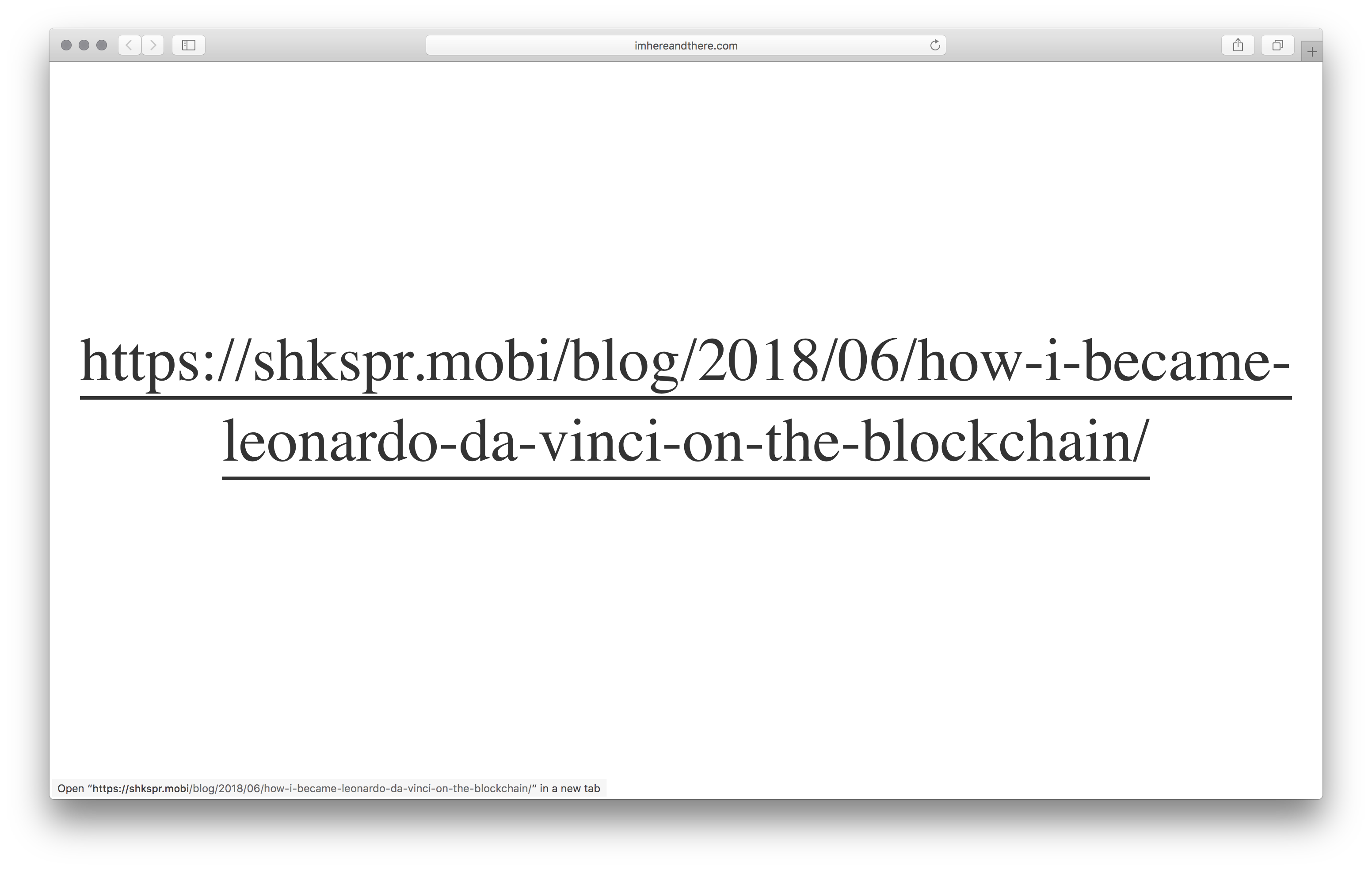 This article accompanies the inclusion of Jonas Lund's I'm Here and There (2011) in the online exhibition Net Art Anthology.

Eileen Isagon Skyers: Tell me about how you got started with programming and net art.

Jonas Lund: I was completing a bachelor’s degree in photography at the Rietveld in Amsterdam, and started programming websites for friends and classmates, because everybody needs portfolio websites.  I realized photography as a medium in itself was very restrictive—like the apparatus of the camera is somehow the determining factor for what the work should be.Then I discovered that you can make websites that are somehow works of art too.

I spent a lot of time in front of the computer, and it's a pretty lonely reality. You have social interactions, but it’s not really social if you don’t get to look anyone in the eyes, or get a reaction to what you say and do. So imhereandthere.com was a way to share that sense: I’m here, and you can be with me at the same time.

It was quite early on in the privacy discourse. That discourse continued when I created publicaccess.me, and Selfsurfing, which was an evolution of imhereandthere.com. Selfsurfing is a Chrome extension that cloned my browser set-up so that you have all my tabs open and get a proper idea of what I am doing. That ran for a bit, and then I decided to only activate it when it's being exhibited, so it's been dormant for a while.

In a way, it’s somehow the most accurate sensation that you should have while browsing.

EIS: Because everyone is being watched?

JL: Yeah. Our bodily response to the erosion of privacy should be as if someone is sitting on your shoulder or looking over your shoulder all the time. But you don’t feel it, so you don’t actually recognize that it’s horrendous.

EIS: Were there certain browsing behaviors you would avoid because of publicaccess.me?

JL: We all have different facets of ourselves that we want to expose or not. It's interesting to recognize that I didn’t think about the implications beforehand.

EIS: If this work was a criticism of data collection—a self-breaching of your own privacy—were there challenges to making art that critiques this kind of practice, using data itself?

JL: I think it's the only way to do it. Most of my work takes that position. Whether it’s the art world as a system, or an online system, it’s critiquing the power structures from within.

EIS: You use a lot of your work to bridge gaps between the author and the viewer, using dimensions like time and performance to allow them to sort of unfold in like a very participatory way. Can you talk about some of your motivations behind that?

JL: I think it comes down to agency and power, in some sense. It’s the fascination with, or the desire to understand, how systems function; how the systems are reached; how we form our beliefs. I can orchestrate certain scenarios and situations; not so much for being interested in the results, but rather, the act of participation itself. You can instill, or produce, this state of thinking about how systems function.

EIS: So putting yourself in that position allows you to become the orchestrator of sorts, and to question the system itself.

JL: Yeah something like that. I mean, I think one of the most straightforward works in that regard is paintshop.biz. It was a shared canvas that everyone could paint on online. I design the system, set up all the rules. And within that framework there are lots of things performing. Part of the motivation behind a lot of my work is to attempt to remove myself from the scenario.

EIS:     What do you think our data reveals about us? And then secondly, what do you think we would do if we were able to visualize that data if it was physically manifest in some way?

JL:       In the end, it describes everything. That’s the sad nature of it. It takes the implicit and explicit traces you give off simply by participating online and on social media. It’s the worst surveillance machinery ever created. Its ability to model your behavior is extremely precise, and it's terrifying.