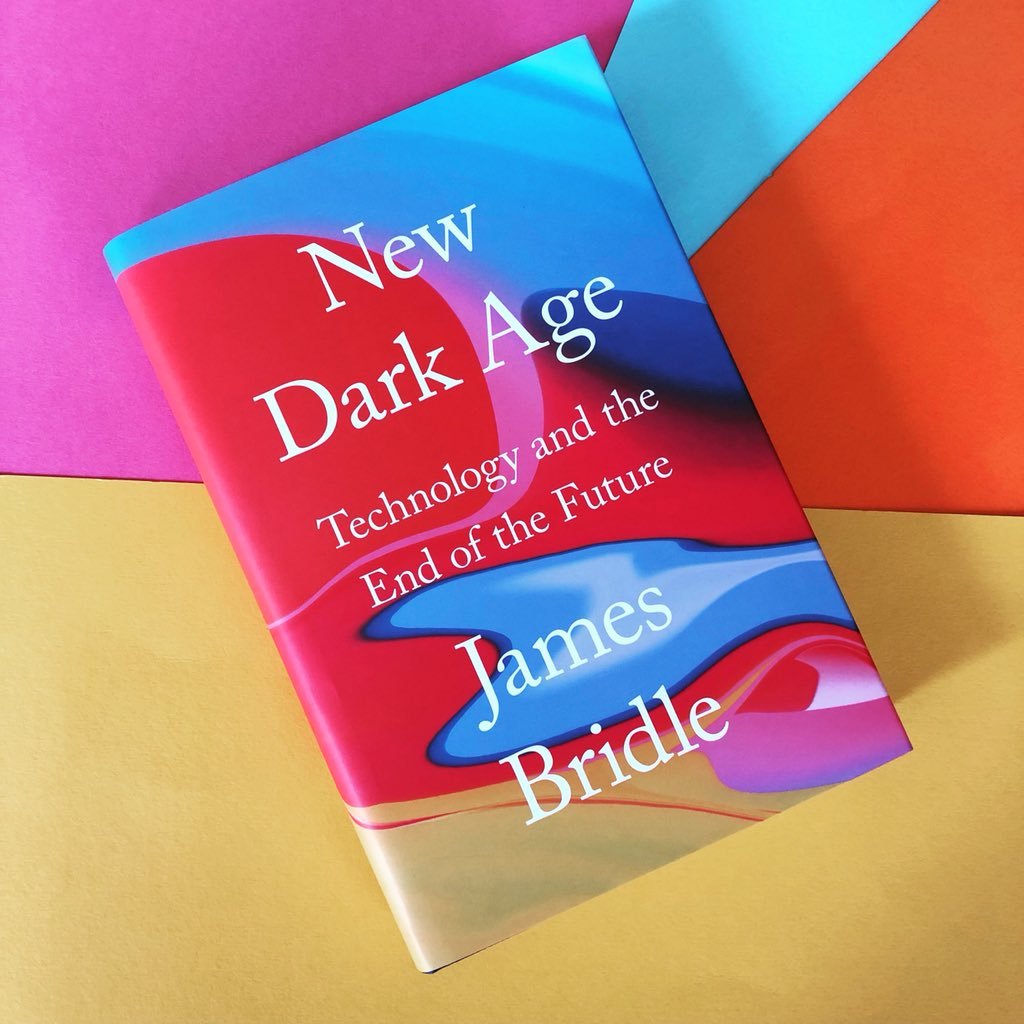 As I began James Bridle’s debut book New Dark Age, I took a pause and stared at a batch of headlines generated by the Google Now algorithm on my phone’s homepage. The headlines are rarely particularly useful, though I read them anyways, in spite of myself. As The Outline reported last year, Alphabet, Google’s parent company, has disclosed precious little about what’s required of publications in order for them to be featured in its Google News results. The company sources stories from tens of thousands of publications, big and small, showing little desire to remove untrustworthy or non-newsworthy results.

I shouldn't have been surprised, then, when I hit this surreal headline from Fox News: “Google AI can predict when you’ll die with 95 percent accuracy, researchers say.” The piece described the report  of a study in which the company’s researchers conducted an analysis of data from more than 216,000 adults in order to predict patients’ potential lifespans, chances of readmission, and likely discharge dates. Their results supposedly eclipsed existing predictive models by ten percent.

Such a strange story provoked any number of questions. What does Google get from examining patient data? How is the AI system analyzing what it’s given, and what are the consequences of its errors, at least in relation to those made by actual doctors? What would you do if Google’s computers told you your death was imminent? Even scarier – what would your doctor do, particularly in our inhumane, profit-above-everything healthcare system?

The article felt uncanny, a perfect synecdoche for the anxieties Bridle explores in New Dark Age. As an artist and author whose work explores the contested intersections of capitalism, surveillance, and computer intelligence, Bridle unravels these vexing issues across his new book. Even as he plunges deeper into the kinds of nightmarish scenarios exemplified by corporate-owned algorithmic death predictors, his mission is to stir people from a technological torpor and chart a radical reassessment of how these tools control our lives. While the book is often unsettling, and rightly so, Bridle's grim prophesies lack a clear diagnosis for forward action. It’s an outcome that's unsurprising given the enormity of what's being explored, but it still comes as a disappointment.

Bridle’s central argument is that “Computational thinking has triumphed because it has first seduced us with its power, then befuddled us with its complexity, and finally settled into our cortexes as self-evident”. It's an elegant description of a trend that’s increasingly apparent: We're trapped by the limited control we have over digital tools that govern our livelihoods, while those at the top flourish thanks to their mastery over the computational forces that regulate our social and political economy. Elites have a vested self-interest in keeping these tools opaque, and as they creep further into our lives, it’s both more urgent and seemingly less possible to confront their impact, even as it feels that they allow us to know more about everything around us. “Our vision is increasingly universal, but our agency is ever more reduced,” Bridle suggests.

But if the information floodgates curtail our ability to resist, Bridle still overdetermines that impact by erasing meaningful political possibilities capable of reining in networked tools run amok. In a chapter exploring stock market “flash crashes,” Bridle argues that “digitisation made the markets both more opaque to noninitiates, and radically visible to those in the know.” As Bridle describes it, we’re inevitably descending towards DeutscheBank trying to increase the speed of light to make trades faster, as Hito Steyerl suggests in Factory of the Sun.

Yet Bridle ignores the possibility of a financial transaction tax, a measure that would hobble the low-margin, high-frequency trades that skim value off of the market, pennies at a time. By refusing this practical solution, Bridle sinks into the kind of all-consuming dread he elsewhere rejects, minimizing collective agency and overplaying the strength of a network that’s still of our own hand, even as it gains its own strange liveliness.

If our machines are increasingly autonomous, how should humans respond in a way that maximizes our virtues while channeling what’s useful about tools that escape our understanding? In an intriguing but underdeveloped argument, Bridle calls on people to accept a level of “practical unknowing,” asking us to recognize the network as “the best representation of [the] reality we have built, precisely because it too is so difficult to think”. Elsewhere, Bridle describes a similar mindset, a space he calls the “gray zone,” which “allows us to make peace with the otherwise-irreconcilable, conflicting worldviews that prevent us from taking meaningful action in the present”. Both thoughts grasp at something valuable, a recognition of agency within a degraded climate of misinformation, overabundance, and distractedness. But they’re not fully articulated, even as they seemingly define the pursuit of political action within Bridle’s dystopic imagination.

These concepts are better articulated by media scholar Patrick Jagoda, who names “network ambivalence” as a practical route through our indeterminate world. Jagoda suggests a way of living within a network totality “without yielding to apathy, cynicism, disengagement, or hopelessness.” His proposed method entails “a deliberate intensity, patience, and willingness to forgo quick resolution or any finality at all.” Jagoda urges us to accept discomfort and contradiction, while instantiating change through critical reflection and creation that embraces a compromised environment as a reality that must be accepted before it can be transformed.

It's a stance that finds echoes throughout New Dark Age, especially when Bridle argues, “Technology is and can be a guide and helpmate in this thinking, providing we do not privilege its output.” Learning to appreciate the virtues of technologies at our disposal, without expecting too much of their capacities, or too little of our own, is a useful approach that straddles the twin perils of neo-Luddism or accelerationism.

Much of what's most successful in New Dark Age comes as Bridle tries to enact this thinking-through-technology, offering a network psychoanalysis that reflects back the all-too-human flaws we continue to suppress elsewhere. Technology enacts “a particular set of beliefs and desires: the congruent, often unconscious dispositions of its creators,” burying a vast legacy of oppression beneath a smooth, high-resolution sheen. If we follow Bridle’s advice, treating technological outputs as a starting point without diminishing our capacity for conscious intervention, we can probe and prod the algorithms that think beyond our comprehension with a desire to learn what these unsettling artifacts say about our worldviews.

Bridle does this work beautifully in his artistic output. One such work is Render Search, in which the artist sought to find people that appeared in architectural rendering photographs, a space in between the digital and physical that instantiates development, growth, and displacement. Playfully adopting the missing person poster (“Have You Seen These People?”), the work pokes at a virtual world-in-actualization, subtly reminding us that those displaced by construction are made to disappear from their homes and communities, victims of an unrecognized pursuit of capital accumulation at all costs. 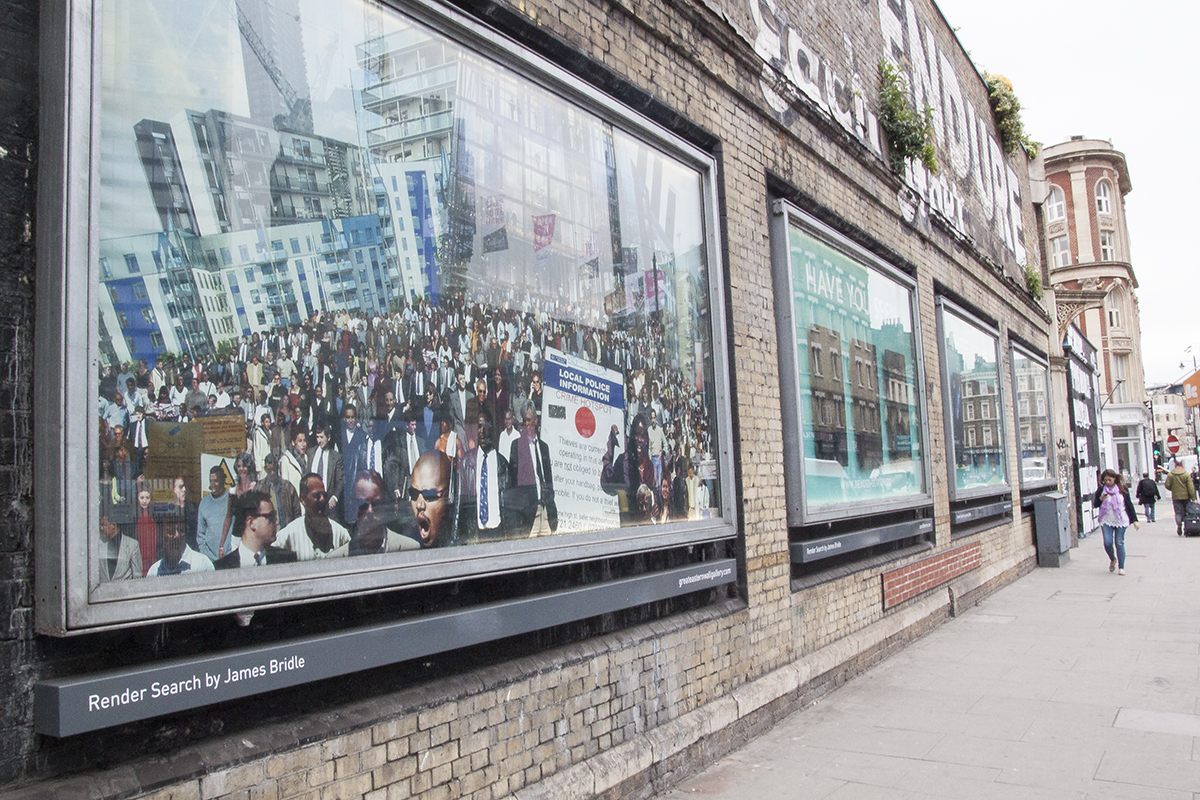 If the New Dark Age is one of our own making, the product of unconscious and conscious desires, enacted in the networks we’ve brought to life, it’s too early to give into a hopelessness that sees no way out. Bridle has offered a grim prognosis, one that hits too close to home at many points in the text. He wants to offer hope, and a sense that if we attune ourselves to the strange frequencies of our computational world, we can once more find our bearings. But if Bridle wants readers to snap out of some computer-induced fever dream and awaken themselves to the undeniable need for immediate collective action, it seems like he might need to look in the mirror to convince himself such change is still possible before demanding the same of others.