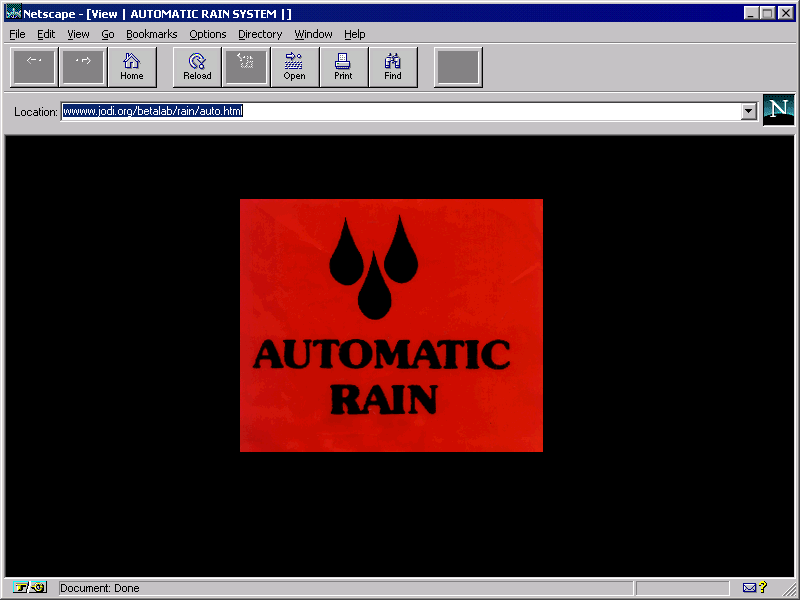 This essay accompanies the presentation of JODI' s Automatic Rain as a part of the online exhibition Net Art Anthology.

The first work by JODI I ever saw blew my mind. Automatic Rain was one of ten works on the first JODI website, or to be precise: the first website JODI had under their own domain name jodi.org, online since August 1995. The late Franz Feigl of Netband showed it to me in December of that year in the artist corner of Desk, an artist-run medialab in Amsterdam. We were preparing Next5Minutes 2, the tactical media festival that would take place in January 1996 and bring together many artists of the net.art group for the first time. Among them was JODI, the Dutch artist Joan Heemskerk and the Belgian artist Dirk Paesmans, who had just come back from an eighteen month-long research trip at CADRE, San Jose State University’s new media laboratory. I was running the radio studio of Next5Minutes, and I only met them a year later at the Secret Net.Art Conf organized by the infamous British artist Heath Bunting in January 1997. 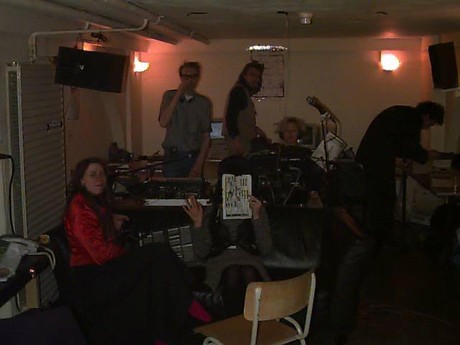 Josephine Bosma with collaborators, preparing for Next 5 Minutes 2. Late 1995/early 1996

In December 1995, on the black computer screen in that Amsterdam canal house, bright blue cypher columns moved, blinked, and trickled down. Until that moment I had mostly seen the internet used in decentralized performances, in installation art, and in more conceptual works. This was the first powerful visual art online I saw with an aesthetic that felt and looked to perfectly fit the new environment of the web. The animated image of Automatic Rain became etched into my memory, but I never saw it in functioning form again: Like much of JODI’s work it was made in accordance with the specific technological circumstances of the day, circumstances that quickly passed. 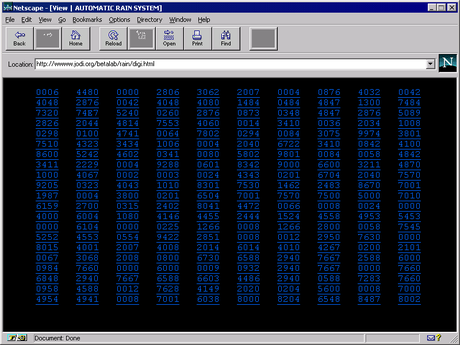 Soon after my first encounter with Automatic Rain, some engineers in Silicon Valley decided that the blink tag function would be removed from the browser. Automatic Rain moved and trickled no more, but froze. For years I have shown this work to audiences as an example of a work that died, or which at least was in ruins. Recently, when Rhizome decided to include the work in Net Art Anthology, I learned that the first version of Automatic Rain was even more exceptional than I thought. It wasn’t just the removal of the blink feature in the browser that ultimately changed this work dramatically. With the passing of time and rapid changes to the structure of the web, the network context to the work changed as well. Faster computers were developed. Better, high-speed internet connections came along. It affected the entire feel of the net, and thus also of the character of art made with it.

Within Automatic Rain, JODI played heavily with download time as a crucial element in the work, as did other artists on the early web. Most artists, however, like for example Olia Lialina with My Boyfriend Came Back From The War, used the slow loading of web pages mostly for adding “quiet” moments or for the building of suspense in a piece. In Automatic Rain, JODI combined slow loading and the blink feature, the simplest basic web stuff, to create nothing less than an actual animation effect. It looked like water, in the shape of blue cyphers, came down in “drops” and slowly filled the screen.

In the mid-nineties, the internet and computers were slow. A web page filled with text would start loading from the top down, advancing more like jolting than in a fluid motion. A blink tag added to the page would give a kind of stroboscope effect. Parts of the loading would seem concealed; movement happened in a sequence of “stills” that changed each time you accessed the page. As far as I know, JODI are the only ones who ever played with this unintentional possibility of the blink tag. Automatic Rain, with all its time-based elements that are so hard for conservators to capture or reproduce, is a perfect example of JODI’s sensitive and smart online art practice. 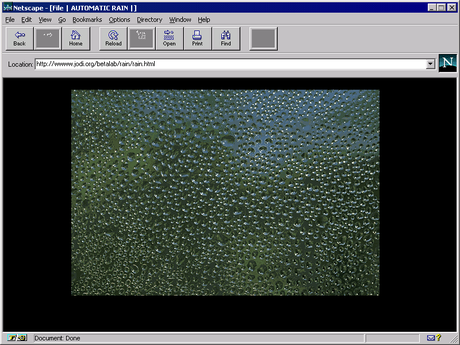 Yet Automatic Rain is more than a clever play with early web features. Automatic Rain is also about a fascination with water control and the logic behind it. Automatic Rain was made when JODI were at CADRE in California. Here the artists saw little red flags from an irrigation system called Automatic Rain sticking out of the grass everywhere. For JODI, the Automatic Rain irrigation system was at once a signifier of home and a reminder they were far away from it. Here they were, fresh from the wet Netherlands, where there is more rain than heat and where the huge greenhouse farming industry demands a similar form of water control: in order to grow vegetables and flowers an artificial ecology is created, ultimately not much different from that in California, which also has an economy heavily invested in industrial agriculture. In San Jose JODI found themselves in an artificially green city surrounded by an often drought-parched landscape, where rain was something controlled “automatically” most if not all the time, as if they were in an enormous greenhouse. Automatic Rain comments on the absurdity of lawn irrigation systems, but at the same time shows a fascination for them.

The work opens with a first page showing the image that was on the little red flags of the Automatic Rain lawn sprinkler company. One of those flags is still in the JODI home today. Clicking on that picture leads to a page with lines of blue numbers, the ones I saw trickling down the screen in 1995 in the center of Amsterdam, just before the influential tactical media festival Next5Minutes 2 and one year before net.art would really take off, starting with the Secret Net.Art Conf. Every row of numbers in the current version of Automatic Rain leads to a photograph of rain on a glass window. This last picture is, in JODI’s words, “Holland.” The artificial raindrops of Silicon Valley's Automatic Rain system are juxtaposed with natural rain from the home country. One can read all kinds of things into it: homesickness, a critical view of water management. For JODI, who like their work to speak for itself, it is simply about what they found on their walks across the San Jose State University grounds.