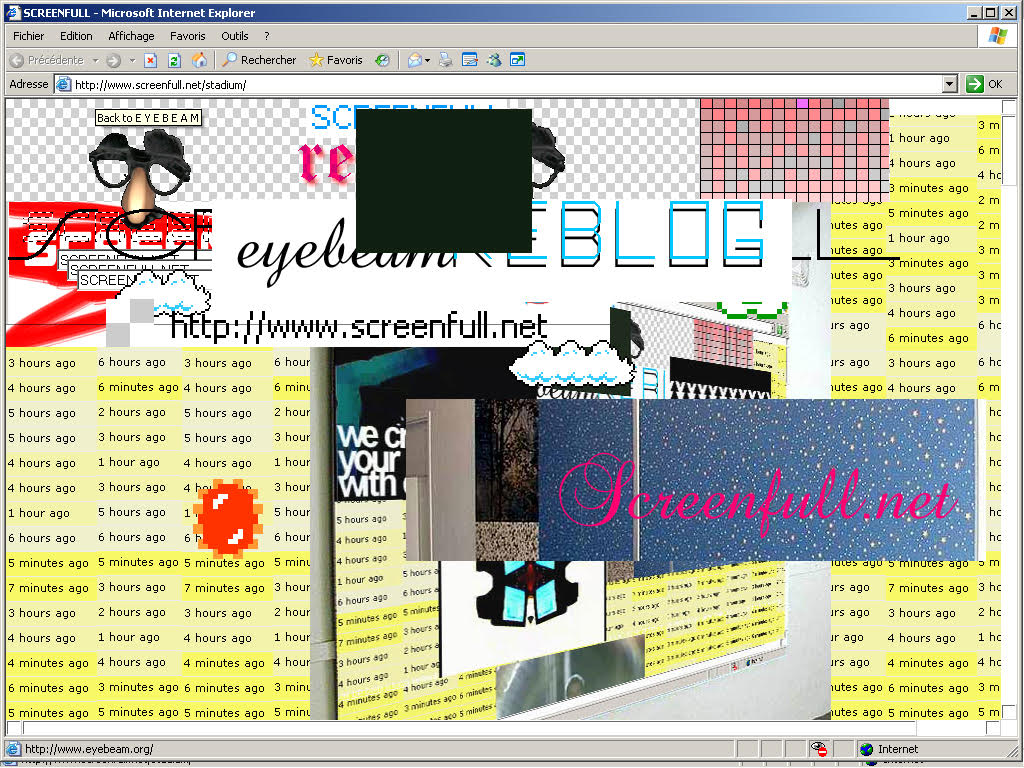 This text accompanies the presentation of Screenfull as a part of the online exhibition Net Art Anthology.

Lauren Studebaker: I understand that Screenfull was one blog in a stream of many projects that you did with Jimpunk, starting in 2003 with noblog, and then 544x378(WebTV). I was wondering if you could begin by talking about how you started collaborating with Jimpunk, and then how Screenfull came into being.

Rick Silva: Jimpunk invited to me to be one of the artists posting on his 544x378(WebTV) project. For that project I was working under my net art alias Abe Linkoln, and was one of about a dozen artists posting on the blog. I was immediately taken with the format, the style, and energy of all these artists working within this shared space.

LS: You only communicated with the aliases at this time?

RS: Yes, at that time we only communicated through our aliases. Jimpunk and I worked on projects for a decade and I still don’t know who he/she/they are IRL. We talked here and there over email or chat, but our main communication was through using images, videos, sounds, and bits of code, on our blogs.

After the 544x378(WebTV) ended in 2004, I approached Jimpunk about doing a follow up project, but without the 544 x 378 pixel window limitation, and this time, with only us two as the authors. As with 544x378(WebTV), one of the most interesting parts of Screenfull was that we almost always had the media play on load—when you loaded the site, often half a dozen or more videos and sounds would start playing at the same time. 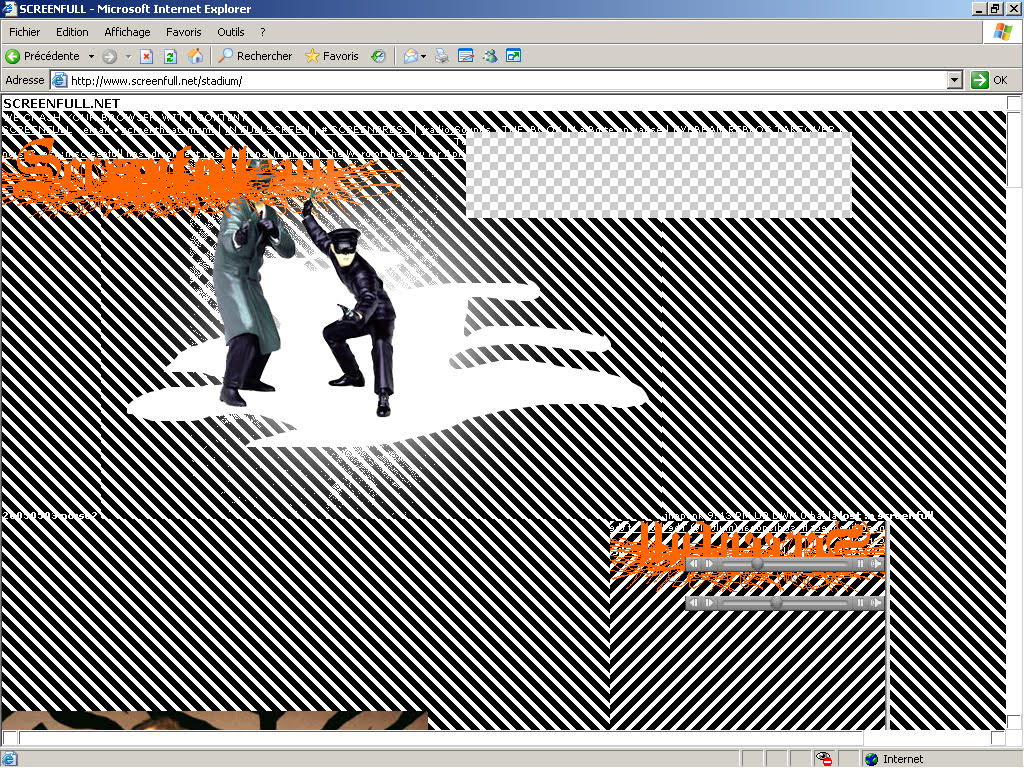 Screenshot of Screenfull as viewed in Internet Explorer on Windows XP. (JPEG, courtesy of the artists).

LS: Do you think that anonymity was a response to the new, developing web 2.0 culture at the time?

RS: Anonymity and aliases were an important part of early net art. The web’s own conventions of usernames and decentralized networks lend themselves to these modes. But for me working with aliases and anonymity was also a connection to electronic music culture. As a teenager I bought my first PC because I wanted to make music like Autechre, Squarepusher, and Aphex Twin. When I was introduced to net art, artists like JODI, Superbad, Jimpunk, and Mouchette had an immediate connection with me because of how their aliases and embrace/critique of technology reflected the experimental electronic music scene I was immersed in.

LS: A lot of times Screenfull is classified as a proto-surf club, as it operated as a blog with collaborative posting of found content. Could you explain the reasoning behind the use of the blog format, and its subsequent practice?

RS: I credit the beginning of surf clubs to Jimpunk with his c. 2003 “noblog” where they invited  twenty to thirty artists to post on a single default Blogspot site.

I often equate blogs to performances, you start this project not knowing exactly where it will go, you respond to the other participants, you have an audience that’s following the development. It could fizzle out after a few weeks or go on for years.

Blogs also make it extra efficient to collaborate,  the “multiple users” features are built into the platform.

LS: Can you explain the practice of the blog, and the use of remix, that you were exchanging with each other? I'm looking at what exists now on the website, and a lot of posts seem to directly respond to each other, in conversation. Could you explain what was chosen to be posted or how you responded to each other’s posts?

RS: Since Jimpunk is based in Europe and I am in North America we had a kind of twenty four-hour posting cycle where we’d each wake up in the morning and react to what the other had posted the hours before.

Because the blog format kicks a post off the bottom when a new one is posted at the top, there was a kind of live mix of sounds and videos that would be constantly changing with each post. It’s great that the blog format has a built in archive system and you get to see the various weeks archived, but you do miss the kind of unfolding post-by-post mix that would happen on the main page when it was active.

You can still get a good sense of the themes and aesthetics we used on the site, lots of references cult films, punk music, software interfaces, and art history. This short piece on Screenfull that Johanna Fateman wrote for Rhizome really sums up the project, and is probably one of my favorite write-ups of one of my projects.

LS: What was the reception like from other internet artists, or the general public?

RS: I felt like people, especially the net art community, were closely following the project. It went on for two years, but we never translated it to a museum or gallery show, and it was never  written about in a book (that I know of). On the website analytics I remember getting a lot of our online traffic from Russia.

LS: You also made a Screenfull book. What was the reasoning for translating this blog practice into a book format? Was it ever printed or did it just exist as the PDF with the intention of people printing it?

RS: We had these mini projects within Screenfull, like the radio station, this Duchamp subtheme site, and the book. We would each take the lead on different side projects, Jimpunk did the radio station, I did the book. In a way, those elements sort of organized the content overload that was the website.

LS: Did Screenfull inform your own practice? Was it more a research-based project or did you both consider it a full work?

RS: Yes, it was a big influence, throughout the 2000s I kept my main net art persona (Abe Linkoln) very separate from my video/sound/performance/Rick Silva work. Around 2009-2010 I began merging my more net art blog format with my video work—projects like antlerswifi.com (2011) and enpleinair.org (2012-13) I consider still tied into that net art/blog art practice. 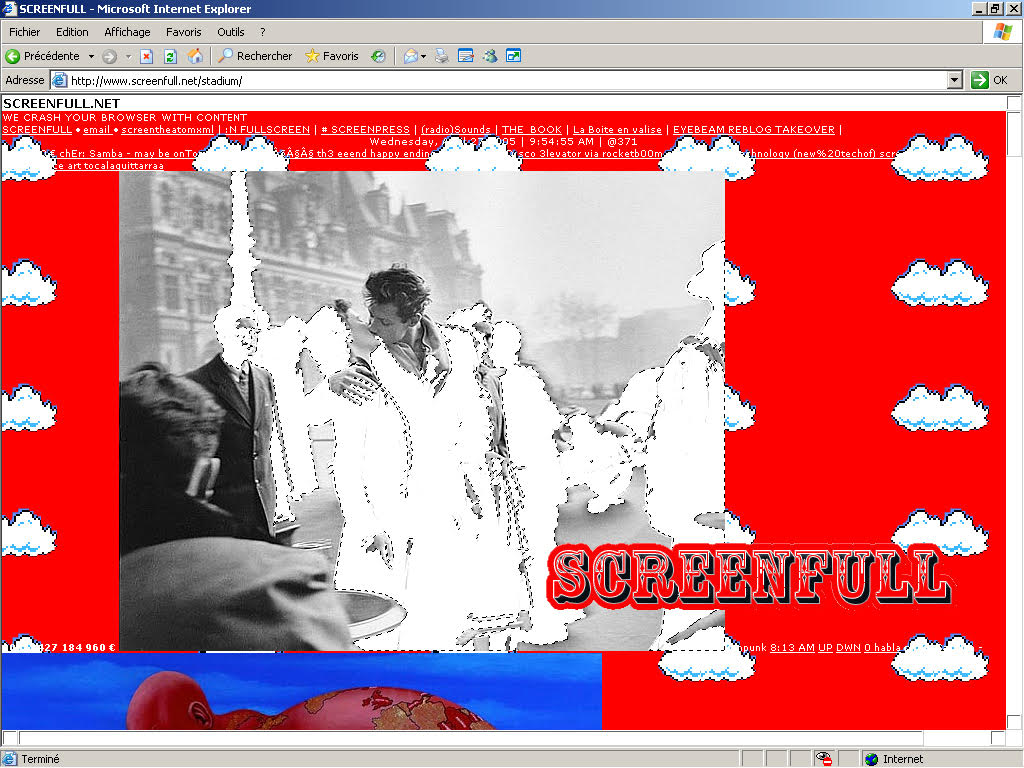 Screenshot of Screenfull as viewed in Internet Explorer on Windows XP. (JPEG, courtesy of the artists.)

LS: Can you talk about your other projects, and how you see Screenfull fitting in with them, as well as the part it played in the internet art scene at the time?

RS: Screenfull.net was the longest running single project I’ve worked on. And it was my first big collaborative project. That way of working, with others, and making lots and lots of little moments that build up to be something bigger is still an important way of making and thinking for me. Aesthetically, Screenfull still reminds me of that era of the internet; Myspace, file sharing, RSS feeds, and the first few times I did a Google Image search— a sense of endless media scrolling, looping, popping up, auto playing, crashing.

More than a decade later I see Screenfull as a kind of inbetween project in the net art 1.0 and 2.0 historical perspective— somewhere between hacker and default, between stand alone sites and social media.

LS: Was Screenfull the last project you worked on with Jimpunk?

RS: Jimpunk and I added a third collaborator Mr. Tamale (aka http://subculture.com) and did the Disco-nnect  Turbulence video blog, and the triptych.tv blog. Both were very much in the same aesthetic and tradition of Screenfull. Jimpunk and I have agreed to someday meet in Hong Kong for a game of ping pong, and I still hope we get to do that.

LS: Did the work you do as Abe Linkoln go on to inform your personal practice as Rick Silva? Do you think the blog is still a viable, workable medium for artwork today?

RS: Yes, my more recent projects like enpleinair.org would not have happened without my earlier net art projects as Abe Linkoln.

I remember when I first started getting into net art in 2001, I would check some of my favorite sites weekly, to see if they had new content up. The very first linkoln.net page was just a kind of start page for myself, modeled after the takesyou.to/manyplaces. Blogs/RSS (syndication feeds) changed that relationship, RSS meant that you could have a feed reader, and artworks/blogs would let you know when they had new content up. I still feel that is a big shift in the way net art evolved at that time. Of course social media has added a whole other complex layer to the feed…and speaking of, you can follow my new project on Instagram. ;)