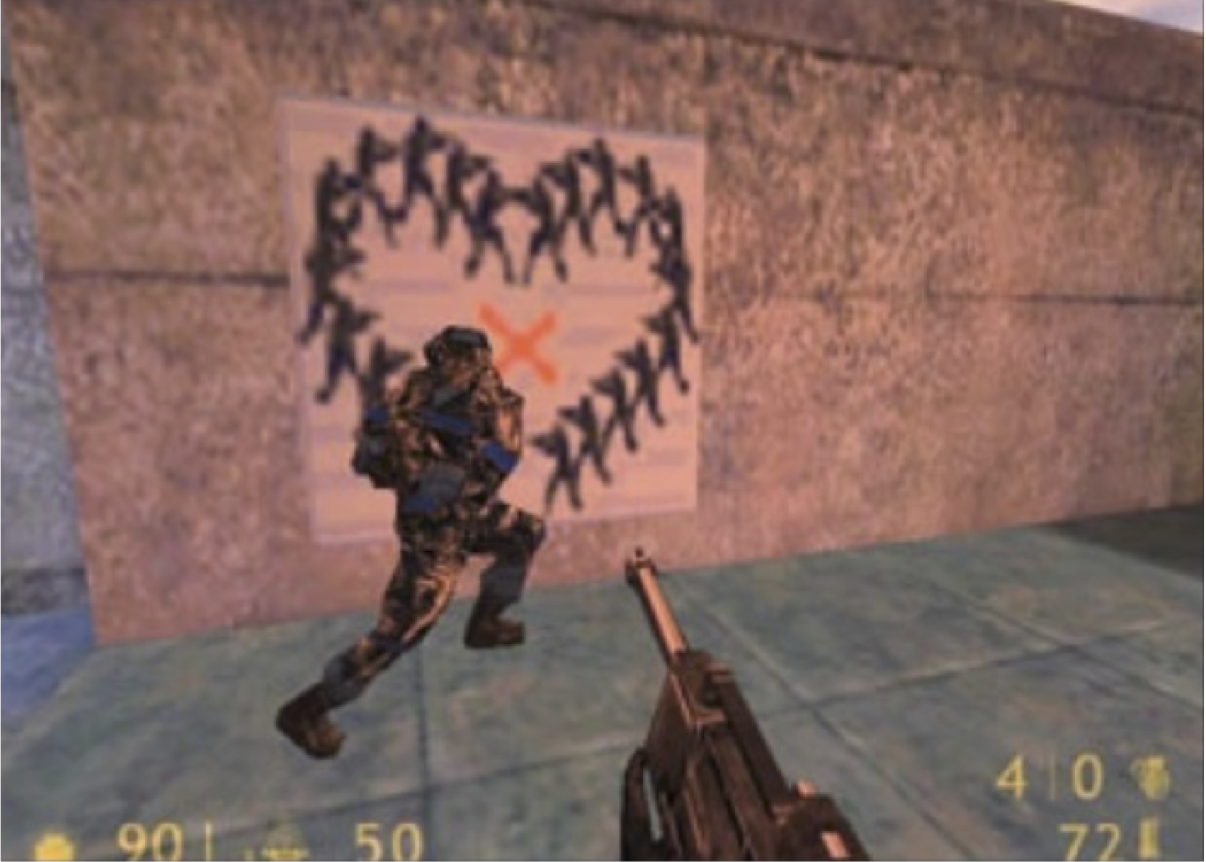 This text accompanies the presentation of Velvet-Strike as a part of the online exhibition Net Art Anthology.

On the day in 2001 the US dropped its first bombs on Afghanistan, artists Anne-Marie Schleiner and Joan Leandre met in a conference hall in Barcelona. They were participating in a game modification workshop; a mod of the WWII shooter game Return to Castle Wolfenstein played on repeat around them as they spoke. From that meeting, and their ensuing collaboration with artist Brody Condon, came Velvet-Strike (2002), their performative modification of the massively popular, first-person shooter video game Counter-Strike.

The premise of Counter-Strike is straightforward: one team attempts to commit a terrorist act while the other team attempts to prevent it. The first iteration of Counter-Strike was developed before 9/11. Counter-Strike co-creator Minh Le (Gooseman) admits, “I was young and chose terrorist factions that were popular in media. I found that picking a terrorist that many people would relate to would make the game more popular. Unfortunately, I was naïve in not giving much thought to the negative repercussions of using Middle Eastern terrorists.” Velvet-Strike transgressively turned the tables on Counter-Strike, introducing a collection of aesthetic mods (called “sprays” in Counter-Strike) that defied the hypermasculine and often grotesque mainstream sprays commonly introduced by players. Velvet-Strike’s sprays featured men kissing, and referenced Kubrick’s anti-war film Full Metal Jacket with a “Born to Kill” peace sign. This came at a time when the US military began developing and using first person shooter video games like America’s Army to recruit and train troops for their wars around the world, including, of course, in the Middle East. Velvet-Strike made a connection between fictional online spaces and the political reality that closely mirrored those spaces.

The early 2000s were not only a transformative time for US politics, but also for the game industry. Gaming was becoming mainstream, and sales figures for video games started to surpass movie box office figures. The internet made the tools for creating and editing games more accessible to players. Brody Condon recalls this period as a time when “suddenly, somebody like me with a limited amount of computer science knowledge and 3D modeling knowledge, could get ahold of an engine and start making small spaces and sketching in those spaces with the limited amount of overhead.” With this accessibility and the influence of artists like JODI and Cory Arcangel, game mods became a popular medium of the new media art scene.

Velvet-Strike was intended by its makers to deliver an anti-war message in a relevant media. The collaborators seized the best medium of the moment to intervene in what they viewed as a space to act out popular right-wing fiction: video games. Velvet-Strike tried to take a “humorous slant on it where we were kind of playing with being sort of tricksters and pranksters in the space while still trying to get our message out about serious issues,” says Schleiner. In addition to being an artist, Schleiner is also a game studies scholar specializing in game modification, something she explores in her book The Player’s Power to Change the Game: Ludic Mutation. Schleiner says, “I was excited at that time with the possibility of public space being extended into the virtual and using game space as a place to get a public message out.”

Joan Leandre seconds the activist nature of the project. “It was a straightforward, a very emotional reaction to what was happening in that moment,” he recalls. “In that moment everything seemed to be very simple. But years later, things are much more complicated.” Leandre is not a gamer, and though he once created work in game spaces, he is no longer interested in games or new media art. Rather, he considers himself more of an observer and researcher of these kinds of spaces and tools.

The mods Brody Condon created were a natural progression from his background in performance art and sculpture to digital media. According to Condon, the mod itself is not the work—the real product is the performance of these mods. In works like Warship, Condon sits with his mods for hours repeating the same action to try to understand his relationship with the screen. For Condon, this recursive, wooden repetition breaks down the fiction within the screen. He suggested Counter Strike sprays as the most time-effective way to spread an activist message widely: “It was clear, to us anyway, that these [video games] were propaganda spaces. These were spaces where right wing ideology was living an extreme. The nonstop destruction of the other in an arena that never quits.”

“I remember us getting killed a lot,” Condon says of the Velvet-Strike performances, in which the trio entered the game armed with their anti-war sprays. The video documentation of the performance is haunting. Counter-Strike is stripped of its usual shit talking and adrenaline, and is replaced by a series of hard, violently repetitive sounds. “If you watch those, the pattern becomes clear fairly quickly. You spawn with your team, you run towards the first goal, whatever that is depending on the map, there’s lots of gunfire and maybe if there’s enough time you get off a spray on a wall or ground and then the character gets shot and then it starts again and again and again.”

The performance received widespread acclaim from the art world, and the video was included in the 2004 Whitney Biennial. “It struck something in people,” says Condon. “Some kind of tender anger. The message resonates with people—the protest against war and US imperialism.”

In contrast, the response from gamers and Counter-Strike fans was intensely negative. The Velvet-Strike website received a flood of emails from players expressing fury with the project. Aside from angry emails addressed to “Miss Joan Leandre” (despite Leandre being male) there was a considerable amount of misogynist vitriol directed at Schleiner:

What a stupid initiative!!! If you don't like the game just don’t buy it, and don’t piss off other people with your shit.

Just a woman could have think of making something like Velvet Strike....

if you don't realize that videogame is just a VIDEOGAME, an that its a fake world, well then, GO PLAY WITH YOUR BARBIE!

Misogyny ran through many responses, but players seemed to take particular umbrage to the idea that CS was anything but pure entertainment. Schleiner remembers, “There was one player who said that he used Counter-Strike as a means to vent his frustration against the terrorists and 9/11. People felt like we were intervening in their recreational war games that were really useful to them for a number of reasons and they also resented a lot that there were women involved in this action.” The “how dare you put your politics in my escape” sentiment runs through a vast majority of the responses as does the assertion: “It’s just a game.”

It‚s just a game, it‚s not mean to have an outlook on the world outside of the computer, it‚s just a game. Something you clearly didn‚t understand.

“The reactions were really fierce, and full of real hatred,” Leandre recalls. “Which is something that doesn’t correspond with the idea of entertainment, of a games, of something without implications. These implications went beyond gaming.” The kind of responses they received raise questions. If Counter-Strike is “just a game,” then why is it able to provoke such angry reactions? And are first person shooter video games still “just games” if used by the US military to train recruits before sending them off to real battlefields to kill?

“It’s a complex topic…there is an implicit violence in the fabric of media today,”  says Leandre  “What was violent for me was when they came out with games like Full Spectrum Warrior in the moment of Afghanistan and Iraq was terribly violent… the fact that this thing was even being published.”

Schleiner reflects on recent events where women in the game industry have been attacked, “I could see where this culture, particularly the culture of FPS military gaming, is quite hostile towards women and that hasn’t really changed over time.” She’s referring to the loosely affiliated group of gamers who led the attack against female game designer Zoe Quinn in 2014. They arguably represented one of the first waves of the alt-right movement, with now-fervent Trump supporter Milo Yiannopoulos leading the charge. Velvet-Strike, like the presence of an outspoken female game designer, broke the fiction these gamers were convinced was real: a world where women don’t play video games and US imperialism is righteous and justified.

The toxicity observed by the artists in Counter-Strike is still present today, though it has spread from the games themselves to social networks. “I’ve been thinking about whether it would make sense to make some kind of sequel to Velvet-Strike in current times,” says Schleiner “At the time we made Velvet-Strike, games were really a kind of popular public medium that people were using, younger people. It seemed like a great place to intervene. Nowadays it seems like maybe where you would want to intervene is on Twitter or something like that.”

The emotional responses from 9/11 and the subsequent war on terror lingered, evolving into what we have today: a tangled mess of angry voices trying to shout their way to the top. Velvet-Strike lives on as an artifact of early gaming and digital protest culture, two spheres that continue to intersect.