The latest release of Webrecorder features exciting new options for working with historic resources from numerous public web archives. Rhizome’s preservation department and a few early adopters already put this new functionality into action before the public announcement, and we are keen to share three examples of web collections incorporating resources from the past—find them below.

Please get in touch via webrecorder@rhizome.org if you have created an interesting collection, with or without using new features! 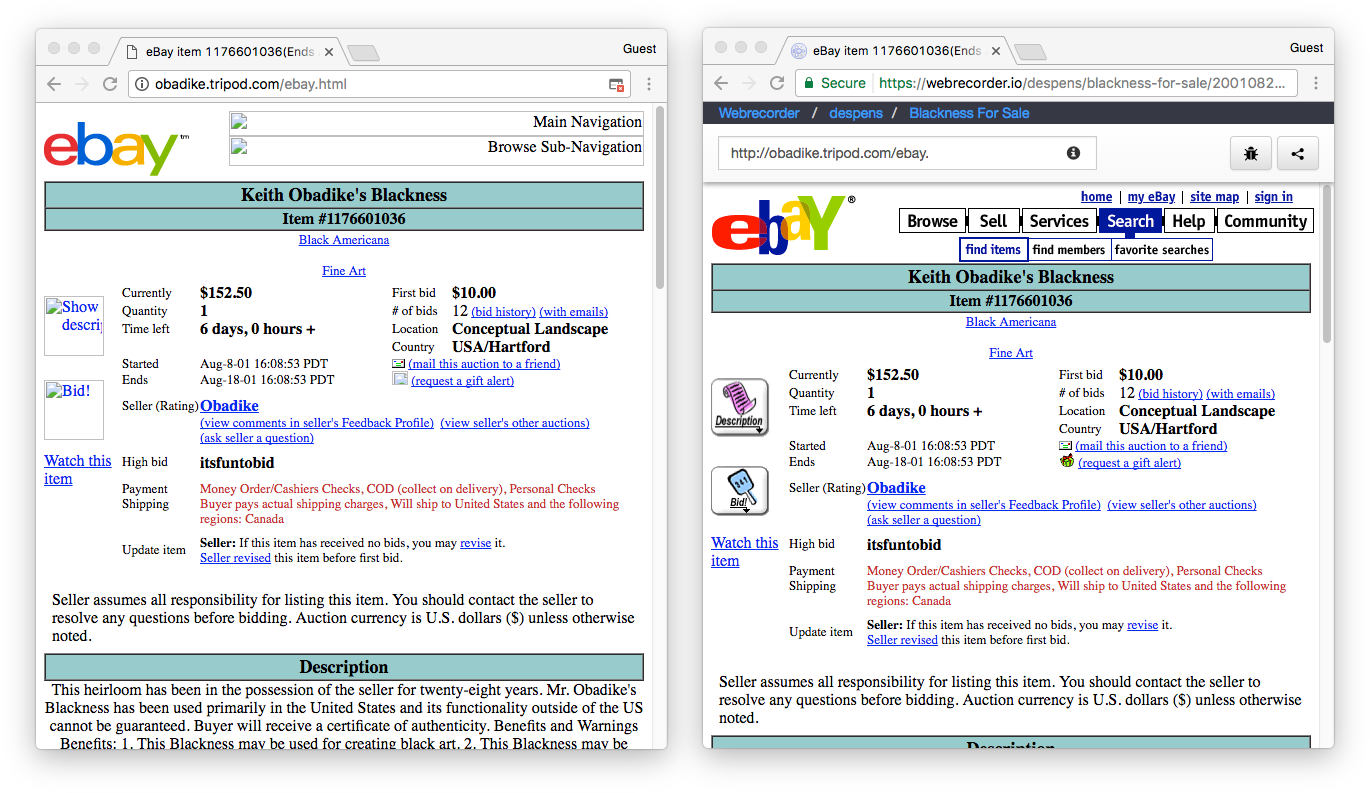 The 2001 piece Blackness For Sale by Mendi + Keith Obadike has an adventurous preservation history: As an eBay auction, it was quickly removed from the platform (read all about it in Net Art Anthology)—however, the artists had made a copy with the browser’s Save As function and put the file on their Tripod site. Since this version embedded all images directly from eBay’s servers, they’re all gone, apart from a now much-too-new eBay logo. The Internet Archive picked up this copy, but had missed a few images. For the Net Art Anthology restoration, material from the Internet Archive has been manually combined with images eBay forgot to delete from the live web and other manual eBay downloads—with the Webrecorder release, the full restoration was done in a second. Webrecorder automatically found the resources missing from the Internet Archive at the Library of Congress and Archive-It: → Blackness For Sale.

The 2004-2005 online performance Marisa’s American Idol Audition Training Blog by Marisa Olson, featured in Net Art Anthology, included numerous resources that were outside of the artists’ control to varying extents. The blog was hosted on Typepad, a service very popular in 2004, and Olson used another now-defunct service to post cell phone pictures to a “moblog.” The blog contained numerous outbound links, as well, which were a key part of the experience of the work, giving insight into Olson’s research and her online milieu.

While it was easy to quickly crawl the blog and fill in a few missing resources with Webrecorder, the moblog and other outbound links presented a problem, as many of them had become inactive or changed radically from thirteen years ago. With the new Webrecorder release, a large percentage of the outbound links have been restored; of special interest are the artist’s moblog, a Mary Jane Girls fan page on Angelfire, FOX’s The Swan (requires Flash or a remote browser), justvote.org, and many, many more.

In 2016, artist Constant Dullaart (awardee of Rhizome’s Prix Net Art 2015) was commissioned to create a version of Olia Lialina’s groundbreaking 1996 net art piece My Boyfriend Came Back From The War (featured in Net Art Anthology.)

For his piece war.capital, Dullaart registered twenty three domains, each hosting a single image. This infrastructure monumentalism made the work especially fragile; the domains expired and war.capital seemed to have vanished. With the new Webrecorder release, Dullaart was able to reconstruct the piece, including the domain names, from single captures recorded by the Internet Archive. While the images don’t display on the Wayback Machine because of slow retrieval from its gigantic archive, the data was there and is now back on http://war.limited/, to finally be integrated into Lialina’s Last Real Net Art Museum.

Webrecorder is both a tool to create high-fidelity, interactive web archives of any web site you browse and a platform to make those archives accessible.

Webrecorder was developed by Ilya Kreymer, and is a project of Rhizome under its digital preservation program led by Dragan Espenschied. It’s currently developed by Kreymer with the assistance of Senior Front-End Developer Mark Beasley, Design Lead Pat Shiu, and Contract Developer Raffaele Messuti.