#fyi: On Slack and Surf Clubs
By Lauren Studebaker 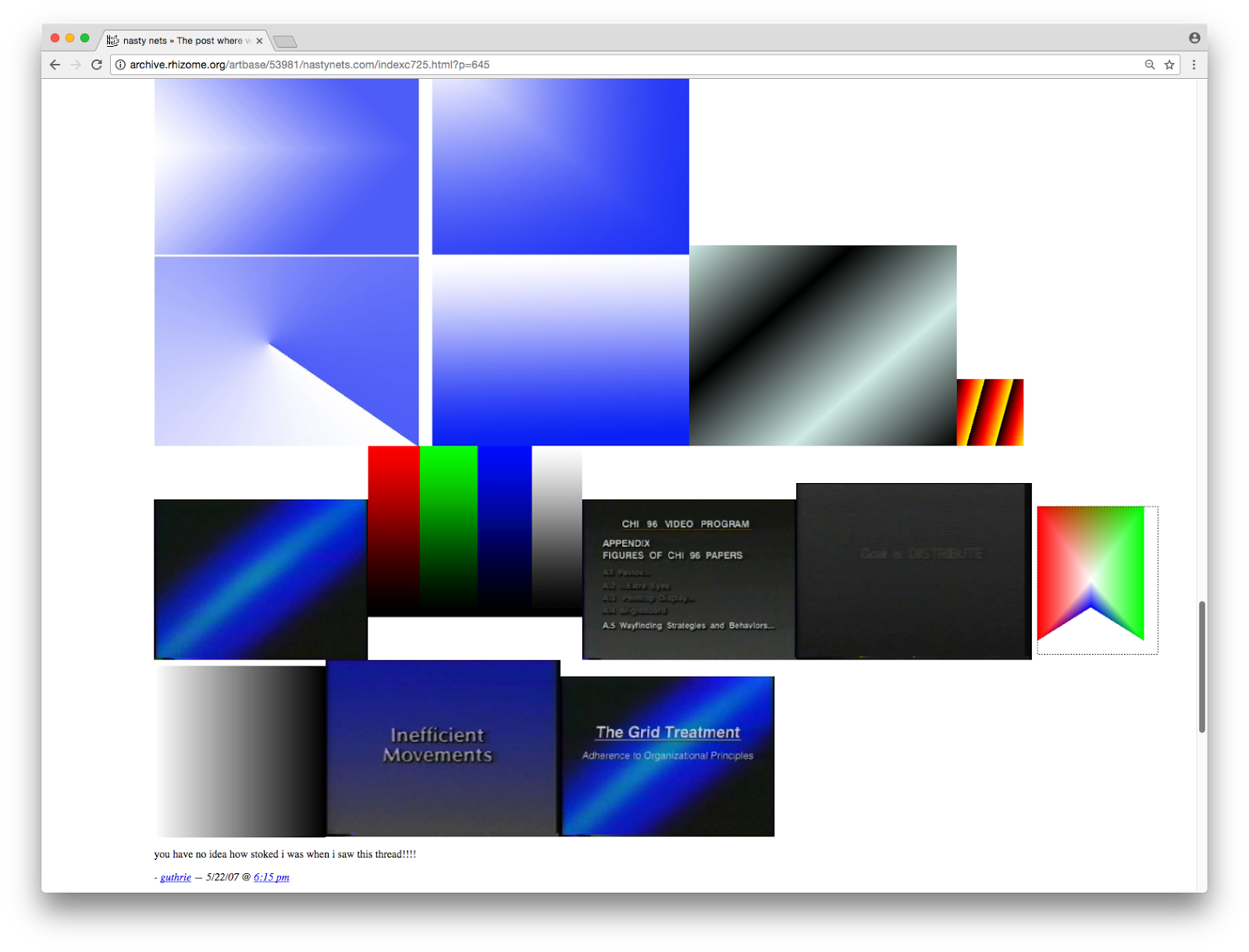 I love Slack. It’s the perfect application of an amorphous office messaging-meets-productivity concept—it provides a break from the constant shadow of my perpetual email-anxiety, and actually creates a space for productive, customizable creative content-sharing and collaborations. Last week, a Slack team I’m a part of engaged in an exchange of slick startup interiors sourced from various Pinterest “#goals” moodboards that bordered on the cleanly sinister. I’ve also recently been part of an indulgent group investigation of the hidden lyrical content of twelve-year-old-rap-prodigy Matt Ox. The jury is still out on whether or not this sort of inspired link-sharing is conducive to my at-work productivity, but it has led me to consider the link between the respective practice of the recreational Slack team and the mid-2000s internet artist surfing club. I’ve spent a lot of time online with both surf clubs and the Slack teams—in my research and work life, respectively—and although it’s not a connection that seems obvious at first, you can trace a direct narrative of influence through both operations. Each highlights the use of a default social platform in an interpretive, discerning fashion that’s representative of the shift in the professional, artistic, and social web.

Slack’s primary manifestation is that of a digital watercooler, acting as the now near-essential platform for communications in the workplace, with conversations sorted into delineated, user-generated, and customized channels for the management of assorted projects and different branches of organizations. Slack’s user interface synthesizes the most successful elements of contemporary social media tools: it combines a Twitter-like use of hashtags and @ replies, the brevity and casual tone of instant messaging applications (a recent addition was a status feature, not unlike the 2000s AIM “away message”), and a tiered-thread system that recalls message-board platforms of the last decade, in the vein of Facebook comment threads or Livejournal communities. It adapts these for a casual corporate atmosphere, with the encouragement of emoji usage (🔥🔥🔥!) and a GIPHY integration that allows for off-the-cuff GIF-sharing. Slack communication is less loaded than sending off a company-wide email, and the structure allows for more organized delineation of tasks and searchable records of communication. The largest disparity between Slack and email, though, is the element of the personal: while email is restricted to a pre-established professional vernacular and a top-down power dynamic of correspondence, Slack evolves with the team using it. The vocabulary and conversation style of an organization’s Slack team becomes a microcosm of the organization’s office culture as a whole, and allows for an even playing field of communication (or the perception of one) among all team members. Slack is also completely private, restricting any sort of outside voyeurism or participation in a team’s exchange; a noted lack of public advertising for the platform brings with it an air of exclusivity that encourages further team-building on each group’s private corner of the social web.

My personal (and aforementioned) Slack proclivity, the recreational channel, is also a common occurrence across the board; they’re created as platforms for collaborators and co-workers to share content not directly pertaining to projects at hand. These forums for link and media sharing often highlight the absurd, or carve out niche interests for a group. Teams I surveyed—ranging from artist’s studios, to nonprofits, fashion magazines, and media giants—have channels dedicated to #lunch, the Kardashians, a tracker of the rampant White House cabinet departures, #fyi, and net art link-sharing. These channels open up discussions and create a celebration of content found through workday web flânerie, embracing the individual members’ varying experiences of the internet through a common and unique argot established by the ongoing exchanges within Slack. On a larger scale, public Slack teams exist that anyone can join, even outside of a workplace; these topic-specific organizations function with sometimes thousands of users and are cataloged on various directories, including Slack List.

This action of remotely sharing and building a visual and verbal environment sourced from web content—now, perhaps a common habit of most social web users—recalls a practice once reserved to internet artist surfing clubs, who championed the use of a pre-established default platform (such as Blogger or Wordpress) as a means of collaboration and media-sharing. Nasty Nets (2006-2012), the inaugural surf club, situated itself within the foundation of web 2.0’s burgeoning social landscape. At the time of a new amateur web, Nasty Nets worked within the architecture of a default Wordpress blog and filtered through the proliferating amateur digital content that had yet to be appropriately organized by hierarchized search engines and filter bubbles, bringing on other artists in an act of performative media-sharing. In one outstanding act of exchange, Nasty Nets responded to a post created by Michael Bell-Smith titled “the post where we share awesome gradients.” The members in the resulting comment thread—Joel Holmberg, John Michael Boling, Borna Sammak, Marisa Olson, Brian Blomerth, and Olia Lialina—responded by sharing their favorite found-default gradients, engaging in a celebratory exchange of the essential background element of early amateur corporate web design.

The idea of a surf “club,” though, brought criticism from an earlier era of net artists, who interpreted the invite-based groups as a departure from the openness of listserves and artist communities of web 1.0. However, this remote application of the artists’ collective developed in response to the new social web and, in itself, created a new method of organizing information found online and creating a dialogue appropriate for a new era of digital interaction. Surfing became artmaking in its own right, and a means of community-building, something shared with the practice of workplace recreational Slack channels. Surf clubs facilitated the development of the internet-aware generation of artists that participated in them, building the foundational visual and intellectual vernacular for post-internet artmaking.

Although it’s doubtful that Slack’s design modus operandi was to build something that functioned as a surf club (Slack was actually born out of an in-office productivity system for a defunct online game run by Flickr founder Stewart Butterfield), it’s worth recognizing the web-based tradition of organizing content as a means of sharing and facilitating a common ground and demeanor in an organization, in an artistic or a professional setting. The e-meeting place roots itself in acts of sharing and collaborating, and using a pre-established platform for a means of innovation and community-building. The difference between the practices lies in the transparency of the surf and the Slack; surf clubs operated performatively due to the public nature of the blog, while Slack exchanges are exclusively restricted to team members. The closed nature of Slack does not lend itself to be historicized or archived outside of the platform’s internal records itself, further marking a trajectory of the privatized surf, and a step further removed from an artistic method. It may be bleak, but we’ve reached a point in the social web that normalizes a culture of surfing-as-habit, versus practice, and Slack (and other social platforms) don’t require or command outside criticism or viewership—performativity, then, inside the digital watercooler lies in the collaboration within the organization—not by forming the dynamics of the burgeoning social-artistic web, but by pushing the boundaries of the office in the age of the internet.