To Serve the National Interest
A New Collaborative Work by Ingrid Burrington, Josh Begley, and Seth Freed Wessler
By Rhizome 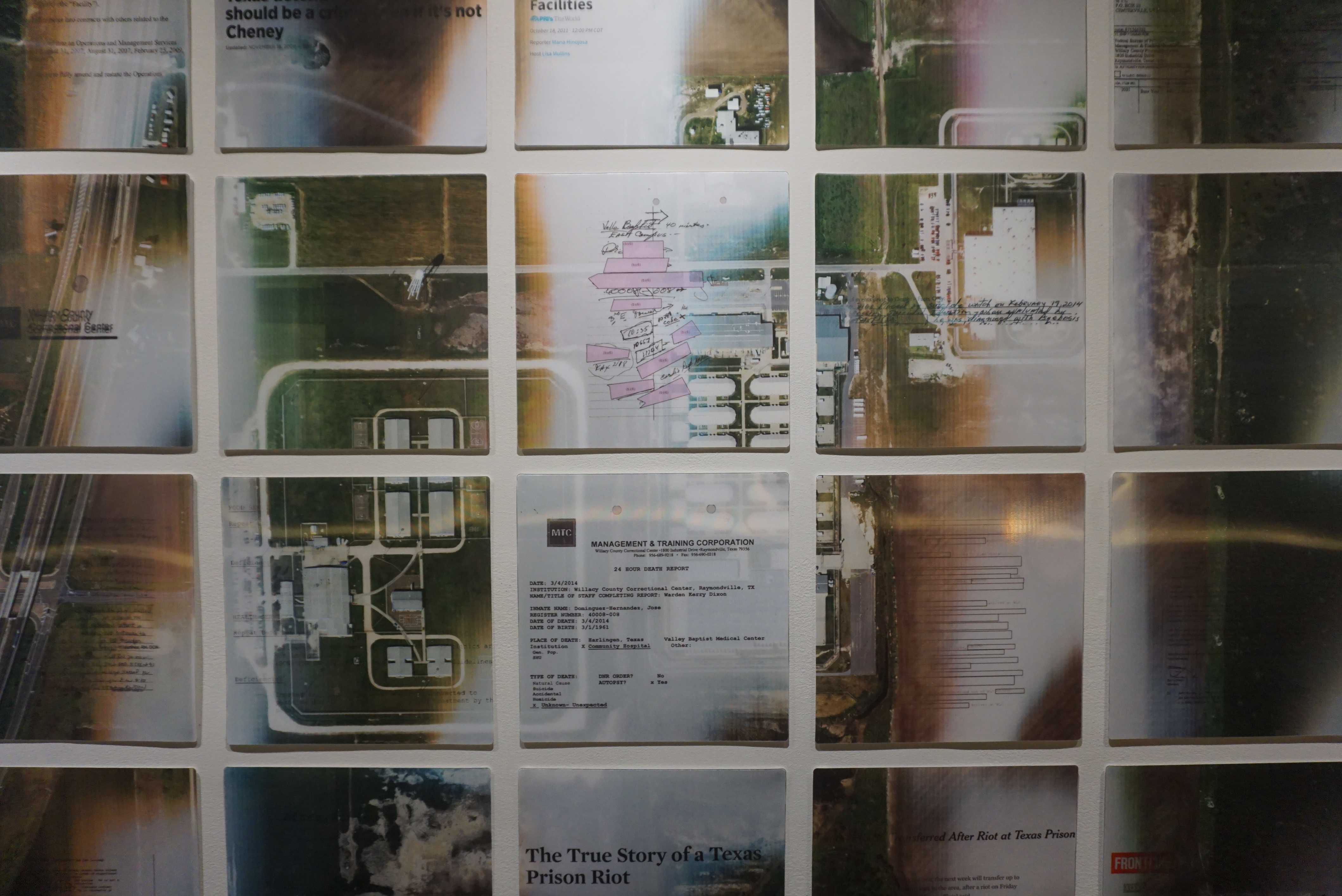 Rhizome is pleased to announce To Serve the National Interest, an installation of new collaborative work by Ingrid Burrington, Josh Begley, and Seth Freed Wessler on view at Ace Hotel New York’s gallery from April 5 through April 28, 2017, as part of Ace’s support of Seven on Seven.

Building on Wessler’s journalistic investigation into privately run immigrant-only federal prisons, Burrington and Begley present seventy-five individual lenticular prints of satellite imagery capturing these sites and government documents pertaining to them. Together the images, arranged into three distinct grids, explore and abstract “the terrain of U.S. immigration and carceral policy and the human stories usually conspicuously absent in the aerial perspective.”

It can be difficult to comprehend and visualize the scale, scope, and sheer violence of the U.S. immigration policies initiated under Obama that are currently undergoing dramatically expansion under the current regime. Focusing solely on singular narratives of tragedy runs the risk of missing the larger, systemic violence of bureaucracy; but zooming out too far reduces that intimate, lived experience of violence to an abstraction. Both perspectives feel fragmented, lacking, always incomplete.

To Serve the National Interest continues Burrington’s inquiry into unveiling and imaging networks and infrastructures. Her projects have ranged from mapping New York City’s overlooked network infrastructure (Networks of New York, 2014-2016) to conducting a study of loneliness using data from Craigslist (Center for Missed Connections, 2009-2011). Last year, her Seven on Seven collaboration with Meredith Whittaker, The Realm of Rough Telepathy, explored mysticism and the infrastructure of the web with the humor and cleverness that run through all of her practice. To Serve the National Interest expands on this work by making the unseen seen, but here imaging a different infrastructure altogether—that of control, power, and incarceration.

The installation is a timely one, with mass incarceration and immigration policy recently entering the national consciousness on a larger scale. However, imaging the architectural infrastructure of this portion of the United States’s systematic mass incarceration of certain demographics turns our attention to the longer timeline—a timeline on the vast scale of architecture—over which these mechanisms of control function.

The installation was commissioned in conjunction with Rhizome’s 2017 Seven on Seven program with the generous support of Ace Hotel New York. See it during the Ace Hotel’s open hours, and join us for a reception in honor of Burrington, Begley, and Wessler on April 20, 2017 at 7 pm.