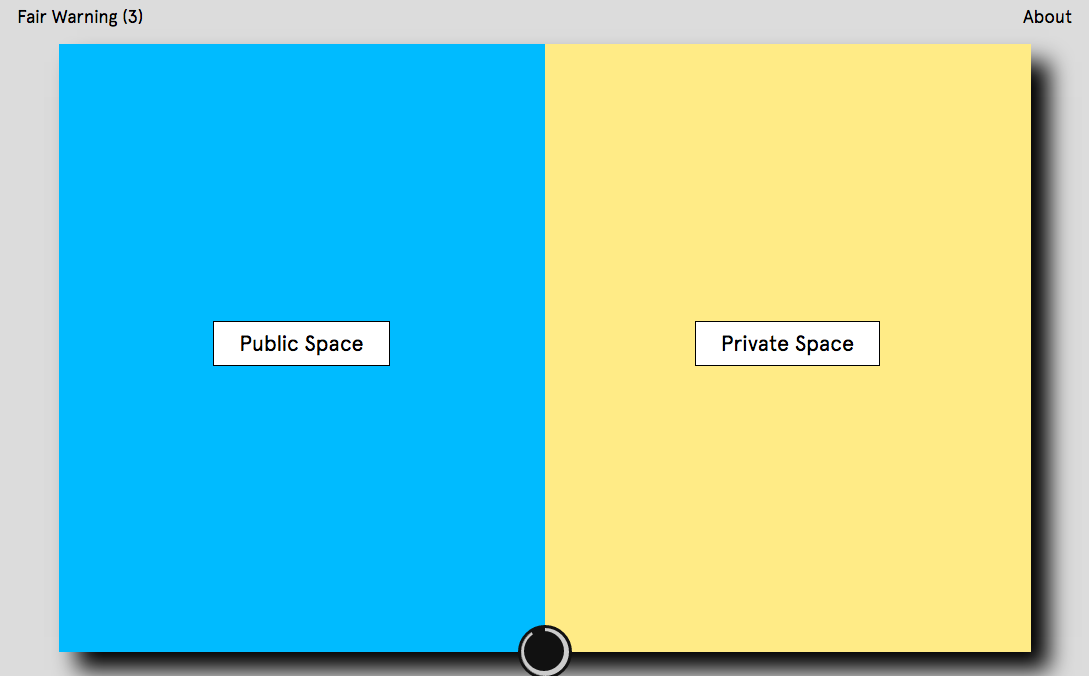 The latest in an ongoing series of reviews, edited by Orit Gat, which give critical attention to online artworks and exhibitions.

In October 2015, Twitter introduced a new gizmo called Polls: “with just a couple of taps, people can weigh in on all the topics they care about.” People love weighing in, they rarely need encouragement, but if you want to make your voice heard then responding to a Twitter Poll is a strange way to do it. In a poll, after all, opinions are predetermined. Input is limited to a choice. Which option most closely reflects your beliefs? It’s a process of identification, usually partial, shadowed by the dismaying realisation that, regardless of which choice you make, your input is statistically insignificant: another drop in the digital ocean. Twitter collects the data and represents it visually, as percentages and graph bars. Whichever answer gets the most clicks is thereby enshrined as the hivemind’s number-one choice. Is this democracy at work? Or is it, perhaps, corrosive to democracy? Consider that innocuous phrase, “just a couple of taps,” its sinister marriage of repetition and ease. It conjures an image of self-expression—in relation to things we “care about,” no less—as mechanical, off-the-cuff data entry.

Jonas Lund’s new online artwork Fair Warning (2016) (co-commissioned by auction house Phillips and the Whitechapel Gallery as part of the latter’s “Electronic Superhighway [2016–1966]” show, which closed May 15, 2016) takes the form of an eccentric online questionnaire or personality test. The pages invite the viewer to input their preferences. Duck or Rabbit? Window or Aisle? Idol or Douche? Apple or FBI? There are multiple-choice questions, photographs of sculptures and paintings, and news images, as well as, occasionally, solid blocks and color gradients. Each time the animated circle at the bottom of the page completes a revolution—this persistent, nagging counter mimics the buffering animations of video streaming sites and the multicolored wait cursor, a.k.a. the “spinning beach ball of death,” on Apple computers—there is a computerized chime. This happens every four seconds. The questions/images change. A choice between two canonical artworks (Girl with a Pearl Earring or the Mona Lisa?) might be replaced, for example, by a probing, cod-philosophical question: “Can you let go of a belief without feeling departure of meaning?” Other than an animated ripple that appears onscreen each time you click, user input doesn’t affect the metronomic rhythm of the piece. Nor is it clear if your preferences are even being registered. (They are: the results of user interaction were displayed as part of “Electronic Superhighway.”) 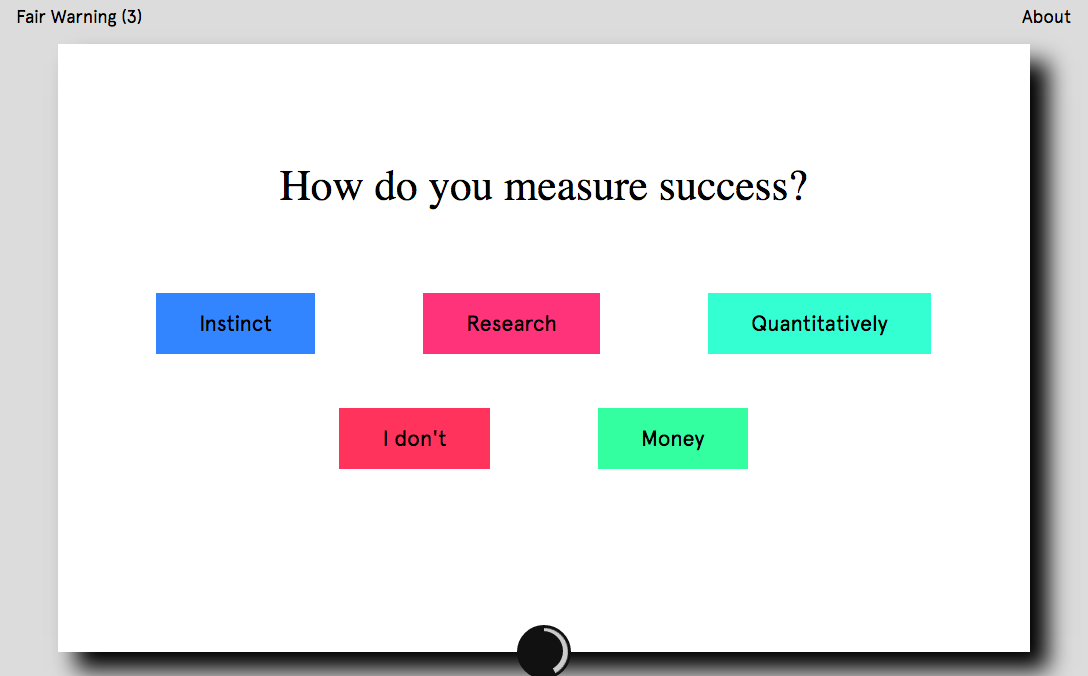 Fair Warning is hypnotic, strangely compulsive, and deliberately frustrating. The first time I tried it, I wanted to leave almost immediately. Perhaps this was because I didn’t feel sufficiently rewarded. If this was art, where was my experience? If this was the internet, where was my content? The unwritten contract I am used to online goes as follows: you receive my pageview, monetize my attention, and in return give me something I want (and expect). Instead, I got a mildly stressful, seemingly endless assault-course of arbitrary decision-making. It felt like work.

Bored but without really thinking, a kind of reflex, I typed “gu” into the address bar at the top of my browser. Google obligingly completed the url, saving me the trouble of having to type. Fair Warning vanished. I was back at the soothingly familiar, blue-tone homepage of a mainstream liberal newspaper. Content was arranged into panels, picture-boxes, and headlines (“Prince Charles says he treats his cows and sheep with homeopathy”). I can’t remember what I clicked. I’d seen all the stories already, having visited the site a few minutes ago, again by reflex, bored. Meanwhile, my clicks were being tallied and analyzed to leverage marketing revenues.

My avoidance of Fair Warning, in other words, ended up reinforcing its central argument: the rise of online quantification has resulted in a reduction of choice in the public sphere. Fences are popping up all over the digital commons, and often it is users themselves—the data-drones and input-slaves clicking and clocking on preordained choices—who are the unwitting barrier-builders. As Jürgen Habermas has argued, in democratic countries the internet can have schismatic effects. The millions of forums for debate available online mean audiences splinter into issue publics of like-minded individuals: tribes, united by specific sets of beliefs and biases, who alternately ignore and attack each other (rather than, say, working together to achieve common goals). The divisive nature of recent American politics, to pick one glaring example, attests to this fact. So does the slogan for the campaign poster Britain’s Labour Party used in the run-up to the local elections on May 5, 2016: “ELECTIONS ARE ABOUT TAKING SIDES.” Given this reductive, side-taking climate, the task of positioning oneself politically, socially, and culturally can—as Fair Warning parodies—feel like filling in an endless questionnaire written by cynical idiots. Are you with us or against us? In or Out? Left or Right? Red or Blue? To which we might reply: I want to be purple! Ambidextrous! I want to establish my own position!

There is a glimmer of hope, however, and it comes in the form of refusal. I use Twitter fairly regularly. As far as I can tell, hardly anyone bothers with Polls.