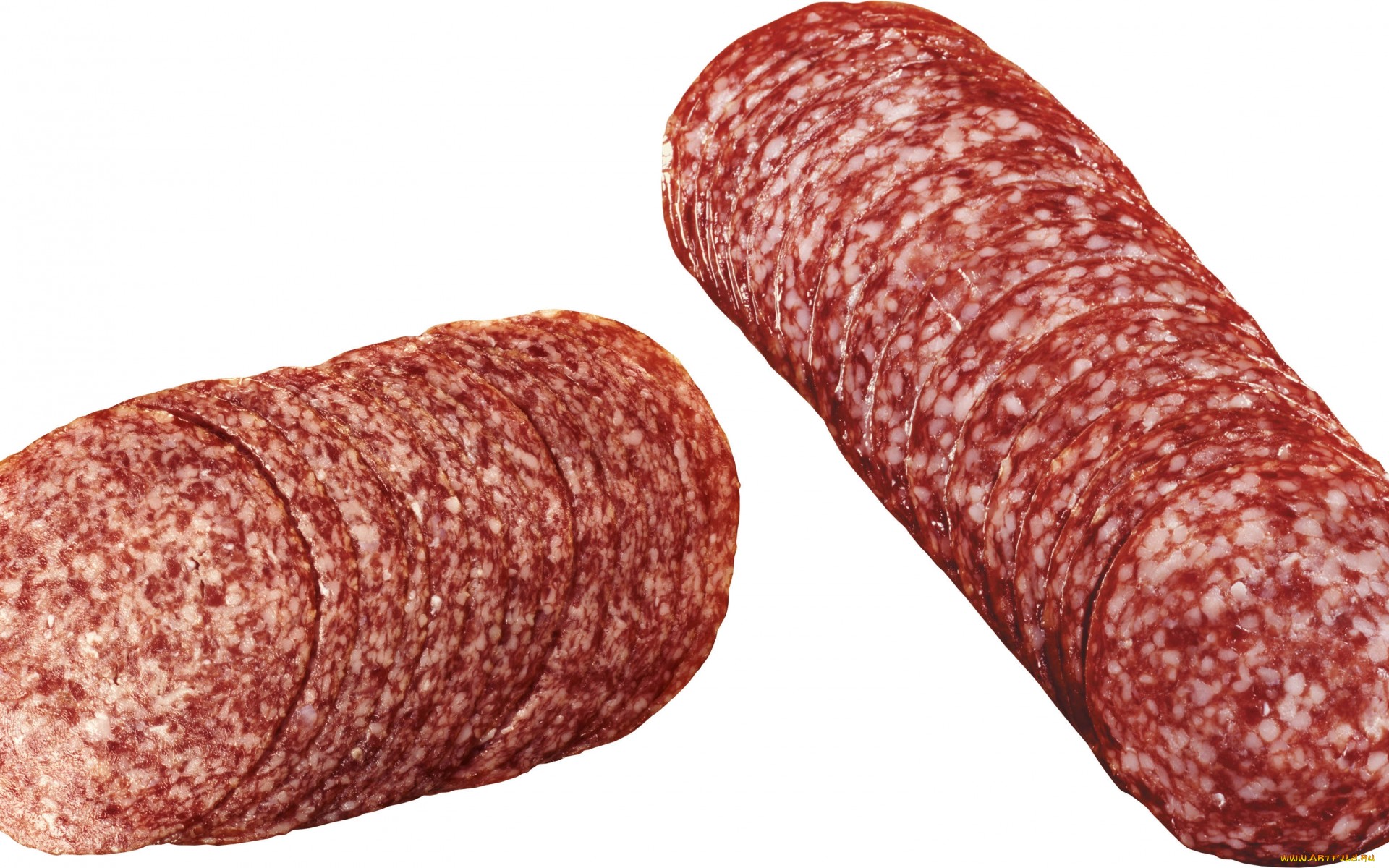 Looking at my .pdf library I recently came across Monte Burch's The Complete Guide to Sausage Making, a book that clearly—and perhaps morbidly—describes some key features of this ancient and mysterious practice. Throughout the reading of this document I somehow realized that I had been learning not only about sausage making as such, but also the mode of existence of some digital images, with whom I coexist.

How is such a leapfrog possible? In Burch’s guide, a sausage can be made by grinding and mixing “scraps and trimmings” and, interestingly enough, by also maintaining a prudent period of “seasoning and curing.” The meat’s encounter with a systematic process of recombination and extrusion, say, configures the sausages. Moreover, it is precisely their sausageness that allows us to access them according to polarized protocols: on the one hand, sausage production is analog and continuous—the more meat we add to the grinder, the larger the sausage is. Conversely, its access is developed according to a discrete, digital-like protocol: the slice.

Shaping images with our digital gaze

An image is no longer a singular thing, but rather it becomes dispersed, distributing its existence along paths, iterations, periplus, and versions provided by both humans and systems. In this sense, images are trajectories through media, devices…and places. Visual characteristics (namely; colors, sizes, textures, compositions, effects, texts, icons, and typographies) are subjected to a large number of recursive and combinatory operations; a memetic modality of some images that supersedes the very notion of internet meme. 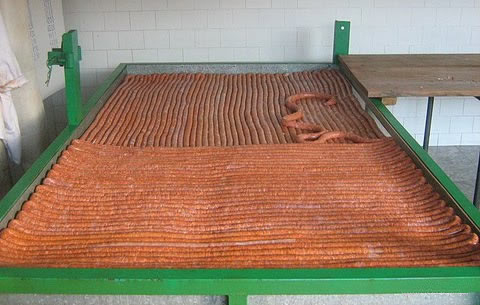 This implies that in order to access an image’s narrative, we have to retrace some of its extruded, threadlike trajectories. Our attention is not focused on a singular image, but is distributed along the image’s path. Since the versioning of an image is the image, the increasing accumulation of similar images is nurturing distributed ways of seeing.

Sausage-like elongation describes the way that images accumulate, but this redundancy of content is not merely piled up, but follows an extruded trajectory that creates threads of dispersed versions.

Since any given sausage is not only a sausage, but also the expression of its formal mode of production, what is the shape of our engagement with it? If either sausage and image are being distributed across a potentially endless series of elongated versions, we can only access images by slicing them. 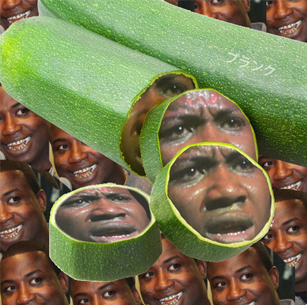 Capturing the environment with our digital devices creates a discrete, framed incision in our surrounding milieu. Hence, further captures within the digital realm (for instance, by copying, tagging or storing digital files) prefigure the apparition of what I would like to denominate image-slices.

These slices have also something that really interests me; an intriguing ability to create their own negative imprint in the form of memory. They remind us that their status as slices conceals the almost invisible process of how our digital gaze deprives images of their own visuality in favor of their memory. If the latter is defined here as a time-based measure of the image's shifting or fading along a trajectory, visuality presents the limits of an image; the contours and deformations produced by its elongation. The shape that a sausage acquires during its extrusion—being limited or arrested by its mold or configuration process—posits visuality as the imprint of energy. The visual cohesion of images is therefore based on modulations; the development of deformations through time.

As any salami knows, its own depletion measures its extinction, but its memory increases as the salami diminishes. By day seven in the fridge, the last extant sausage piece compresses a huge amount of time within a narrow meat scrap, which indicates, as if metadata were present, its very process of dwindling.

The accumulation of image-slices made by our digital gaze is not indiscriminate; it overlaps and compresses nuggets of visuality seeking an array of coagulated slices, relating images by means of mnemonic paths: spaces, affections, repetition, and desire. In doing so, digital images are increasingly becoming an ancillary verification of memory's circulation through systems and users.

The circulation of the digital image is propelled through versioning, elongation, and indexical techniques which optimize access to it by reducing the importance of its immediate visuality. After a certain point, memory’s circulation through systems and users becomes the image’s primary index, pointing to its internal coherence rather than an external frame of reference. Certain images can therefore intertwine themselves toward total memory, devoid of any content apart from their own possible trajectories.

Undermining visuality, from Egypt to my smartphone.

In an attempt to domesticate the Egyptian landscape during the Napoleonic campaign in the 18th Century, Nicolas Jacques Conté invented an engraving machine that by virtue of its accuracy brought engineers the possibility of describing the landscape in the most objective way. The free movement of the hand was replaced by up to forty-two possible sequences of lines that guaranteed not only a higher degree of precision, but a faster rendering speed. In the monumental Description de l'Égypte it is possible to find examples of these line patterns; rectangular images that visualize nothing but the expression of their mechanical production.

Back in the 21st century, this undermined type of image reappears in the screen of my smartphone. Whenever I swipe too fast over Google Images’ search results, the accelerated flux of images surpasses by far the device’s ability to display them all. I no longer see images, but an array of plain-colored rectangles.

How does this situation correlate with our subtractive digital gaze? My contention is that our digital gaze wants to subsume image within a larger structure of memory. If memory is based on delay—or hysteresis—then our digital gaze must decelerate the image's elongation in order to situate it within memory. In the era of visual salamis, we are no longer pursuing images, but image-slices that allow us to reconstruct their possible trajectories. This implies that the completion of memory is based on the limitation, almost the disappearance of image’s visuality.

From a computational standpoint, I imagine that this process erases the constructed distinction between software and hardware to the extent of making both indistinguishable. 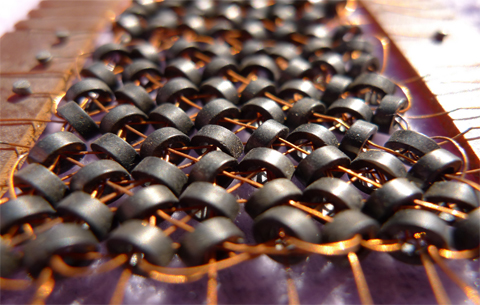 An example of Core Rope Memory contained in an Olympia 15 digit calculator, circa 1971

The pursuit of memory not only undermines visuality but its interfaces as well. Perhaps digital memory artifacts will no longer need visual access interfaces such as screens…but in the meantime, let us take a look on a particular prehistory of this possibility from 1960s, where NASA's Apollo Program developed a form of ROM memory called Core Rope Memory. This was produced by literally weaving a wire skein along ferrite cores. The method of weaving wires—passing or bypassing the cores—configured the software. Therefore, memory was the outcome of an entangled, self-descriptive weaving motion: memory is what happens along the ferrite cores. Contrary to RAM memory, this Core Rope Memory was a non-volatile repository which keeps all its possible tasks in advance, indefinitely, even without energy supply. David A. Mindell's Digital Apollo: Human and Machine in Spaceflight recalls how the Apollo 12 computer easily rebooted itself after lightning struck the spacecraft. Without tapes or disk drives, Core Rope Memory visually exposes its limits and functions. We can imagine it as an artifact with the ability to keep and describe the totality of its existence, not by upgrading itself further, but through total access to its finite structure. This sheer visuality of its woven core—a kind of hardware—is the software, in absence of any other intermediate symbolic interface. The Core Rope's wire paths undermine images insofar as it constitutes its own memory. To put it simply, its finite woven code exists by itself. A distinct modality of software as the human-readable aspect of the machine is no longer necessary.

In the meantime, digital plein-air

I have to stress that, although sausage making is a pleasant and mouth-watering activity, is not precisely exempted of risk. Whenever a meat scrap falls off the cutting table, we are in peril of getting a contaminated, even a hairy sausage. As Burch’s guide reminds to us: “the one that eats the most sausage gets the most hair.” Nowadays we are witnessing the process of subsumption of memetic images within memory, but in the meantime, we are finding memetic images in the outdoors as well. 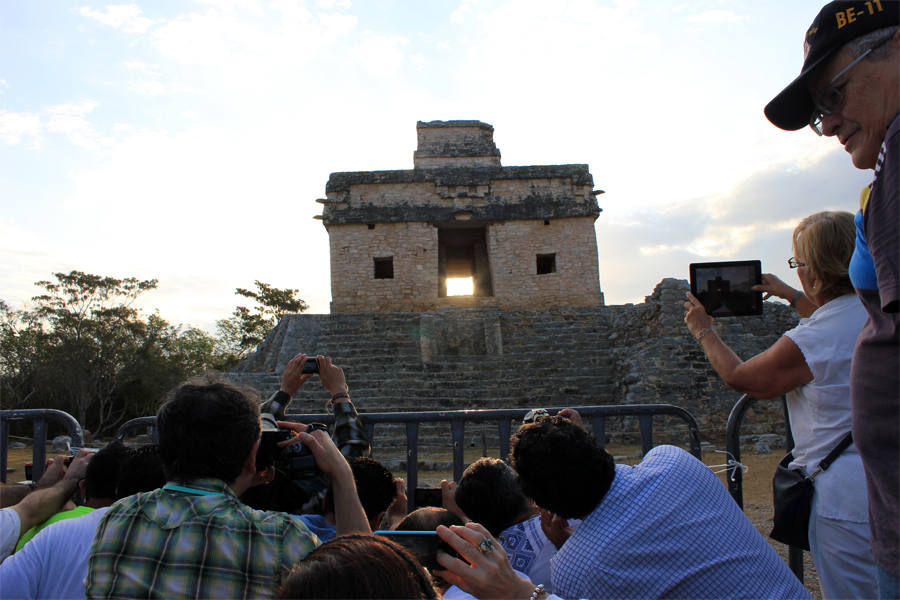 The temple of the Seven Dolls in Dzibilchaltun, Yuc. Mexico

Despite the fact that the Seven Dolls Temple in Dzibilchaltun (Mexico) perhaps was never conceived as a temporal landmark, during each vernal equinox a multitude of people congregate around the temple. When the Sun emerges, its beams traverse the temple's open door towards a plethora of smartphones, digital cameras, and tablets. The sunlight is not only framed by the door; it continues its trajectory by virtue of the devices’ capturing and the images’ further circulation.

After my first visit to this temple in 2012, I became increasingly interested in the particular elongated quality of this sort of memetic images. During the last three years I have been visiting several areas of Southern Mexico, finding along my way a variety of these images: digitally printed cylinders in the shore of Bacalar lagoon, fluorescent hoses in Palenque's jungle, gradient-like car reparations in Merida, polygonal paper dinosaurs in Chicxulub, to name a few. These memetic images incorporate an array of digital textures, patterns, gradients, and even moiré effects, but somehow their physicality produces an interesting disruption in its surrounding milieu. They popped out in our vision by highlighting their obvious digitalness in absence of devices, binary code, or even electricity. How is such a thing possible? If the traits of memetic images can be sustained in spite of devices —or their closeness—we must reconsider them as entities created uniquely by devices. Images linger at a certain distance of them; sometimes closer—even “within”— sometimes too far to be extant. 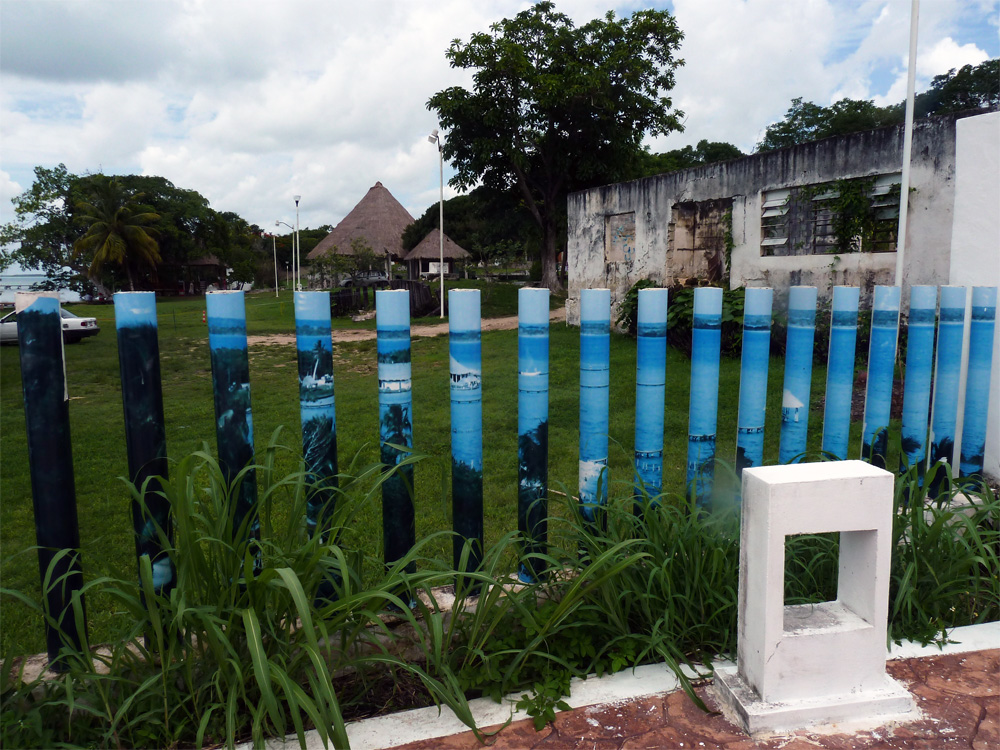 Constituted as trajectories by means of versioning, these memetic images could have existed before the advent of the internet itself. Acknowledging this fact places us in the striking situation whereby the prehistory of digital images comes after their “official” emergence as media; as if in the very moment that we relocate these images from their alleged habitat (digital devices,) devices no longer “create” images. The context of memetic images does not lie in their materiality—for example, their pre-filmic or pre-screening origin—nor in the materiality of the places they represent. Conversely, we find context in the very action of capturing and slicing images, as well as in the device's situational location.

The encounter with digital, memetic images in the outdoors and their incorporation within networks and memories denotes also the uneven degree of internet implementation over the Earth. Since bandwidth speed results are affected by geography (and geopolitics!), time is the subsidiary of space. The imbalances in a memetic image's speed of elongation describes real geographical distances between captured places and access to internet networks. This produces a particular phenomenon of historical remoteness, whereby 'antique' memetic images are still in the process of being incorporated, uploaded, elongated. As if the light of a distant sun were rising, we still are receiving and unearthing images pertaining to these memetic realms.

Javier Fresneda is a San Diego-based artist and researcher. His work can be found in www.javierfresneda.com among other places.