A Studio Visit with Cheryl Donegan
By Michael Connor

Cheryl Donegan's residency and exhibition "Scenes + Commercials" is ongoing at the New Museum, Rhizome's institutional affiliate, through April 10. Alongside the exhibition, Rhizome is presenting Donegan's 1997 online work Studio Visit, which was commissioned as part of the Dia's still-ongoing series of Artist Web Projects and included in the ArtBase, Rhizome's archive of net art and new media.

Many of Cheryl Donegan's works could be characterized as the continuation of painting by other means. As curator Lynne Cooke noted in an introductory text for the work in 1997,

her preferred media are video, performance, and installation, and her recurrent points of reference film, MTV video, modern decor, and the mass media. By such means, she addresses canonical subjects in modern painting: the traditional relation between artist and model, the purported autonomy and nonreferentiality of abstract art, the topos of the heroic, gestural painter.

With Studio Visit, these themes are explored through the "codified ritual" of the studio visit, which is represented as a multilinear narrative using the basic elements of the web--HTML, frames, gifs, a wav file.

I spoke with Donegan about the work via email. 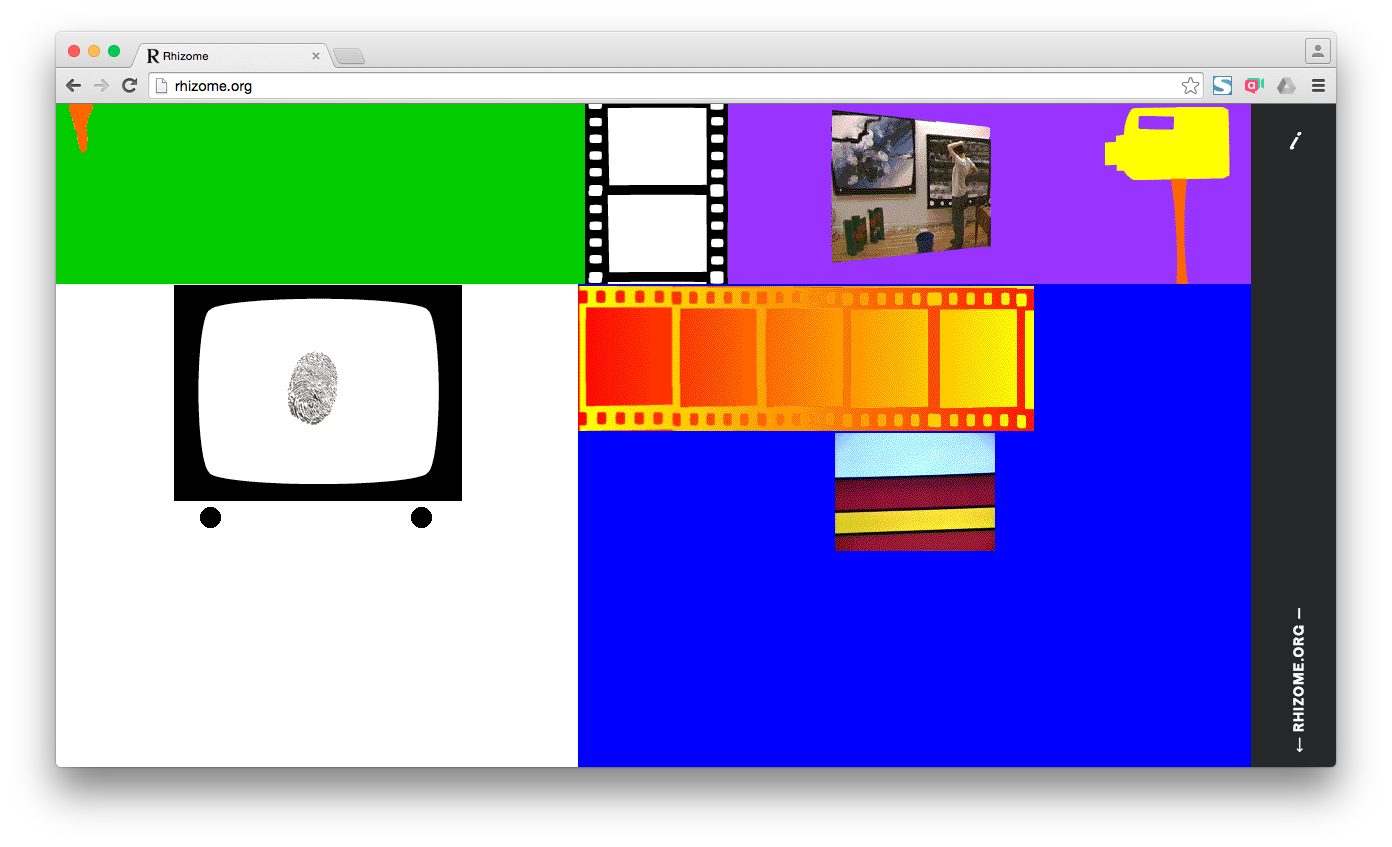 MC: Was this your first artwork for browser-based viewing? How did you approach it?

CD: Yes. I remember at the time feeling confused about “interactive,” which was a buzzword on the early web, ‘cause all the “interactivity” seemed to be just clicking….so I decided not try for a fancier concept of interaction, and that is when the idea of Studio Visit came up-- I wanted the viewer to wander through my images without explanation, with gifs providing surprises…like one of those old-fashioned advent calendars.

MC: The landing page of Studio Visit greets visitors with icons which represent important recurring motifs in your practice: a thumbprint, a plastic jug, and a cigarette pack, alongside a strip of film that seems to signal the mediated nature of the encounter one is about to have.

CD: I was using those icons in painting and video at the time, and the environment of the computer screen (photoshop, illustrator) was a nice place to play with the images and not have to worry about the formal qualities of either medium... The lack of an “object” was freeing, as I was struggling with that in the studio. There was the temptation to use photo to “capitalize” on the video imagery, but that never held anything for me, so exploring new media seemed- why not?

MC: In the New Museum publication distributed at your current show, you use the word "Compression" to describe the process of translating from three-dimensional objects and surfaces to the thinness of the digital image. Are these four icons an example of compression?

CD: I don’t know if I would have articulated it as “compression” then, but I think I had the idea, from a painting project with video that I  showed in Soho at Basilico Fine Arts in 1997, of the “retrospective development”, meaning that you could look to the past and see the future forming…like in a studio visit. So compressing the past and future….

MC: In one sequence, there are forty webcam-style thumbnails in which you're painting, chatting on the phone, etc., all shown at a skewed angle with an icon representing a video camera (or possibly a plastic jug) trained on it. This was the era of Jennicam, when there was a fascination with lifecasting even when the web was very slow and lo-fi. In the webcam sequence on Studio Visit, the still images cycle through on their own, as if they are being broadcast live from a real low-bandwidth webcam, but the visitor can also click through them at a faster pace, which reveals that they are in fact pre-recorded. Was Studio Visit intended to feel like an experience that unfolded in real time, or in a particular real time of the web? 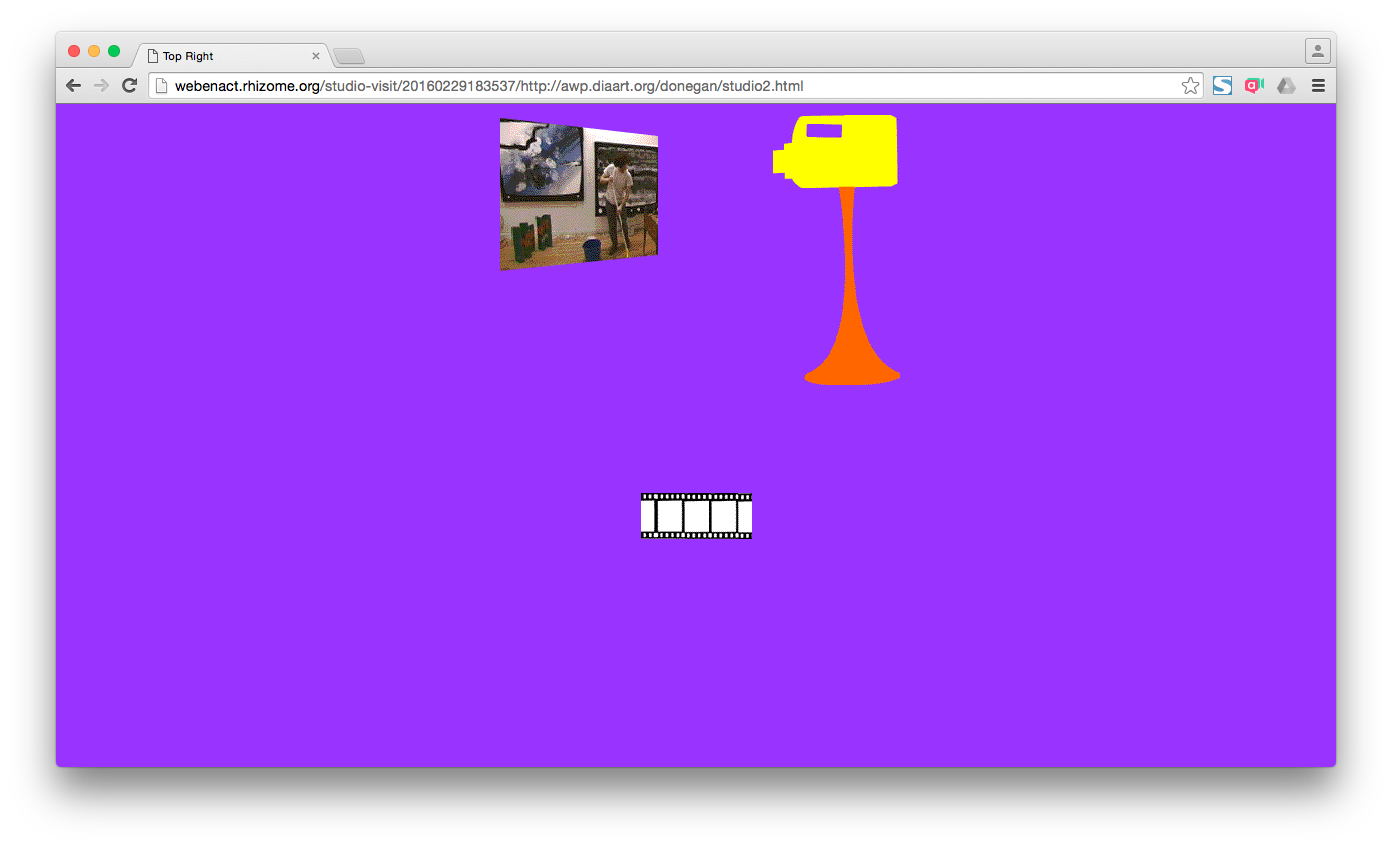 CD: Time was funny here, as artists seemed to be very excited about the promise of the web (virtual reality and all that…). But most of the web projects I remember seeing were disappointing, because people tried to be really ambitious with the technology and it just wasn’t there yet. I deliberately tried to do 'less than' the web was capable of at the time so that it would work! So it sort of unfolded in lame time….

MC: I'm also very interested in the sequence in which the user advances through several frames, causing paint to drip. It seems to connect with your interest in gesture and surface.

CD: I remember thinking about “interactivity” as I said above, it was such a buzz word then, so I was apt to question it. I just I wanted the viewer to feel that the interaction could be a MARK, but one they did/didn’t make as it was a preprogrammed command. A lot of early web design was mouse over and stuff, where you had to search the page for hotlinks and other arty stuff!!!! 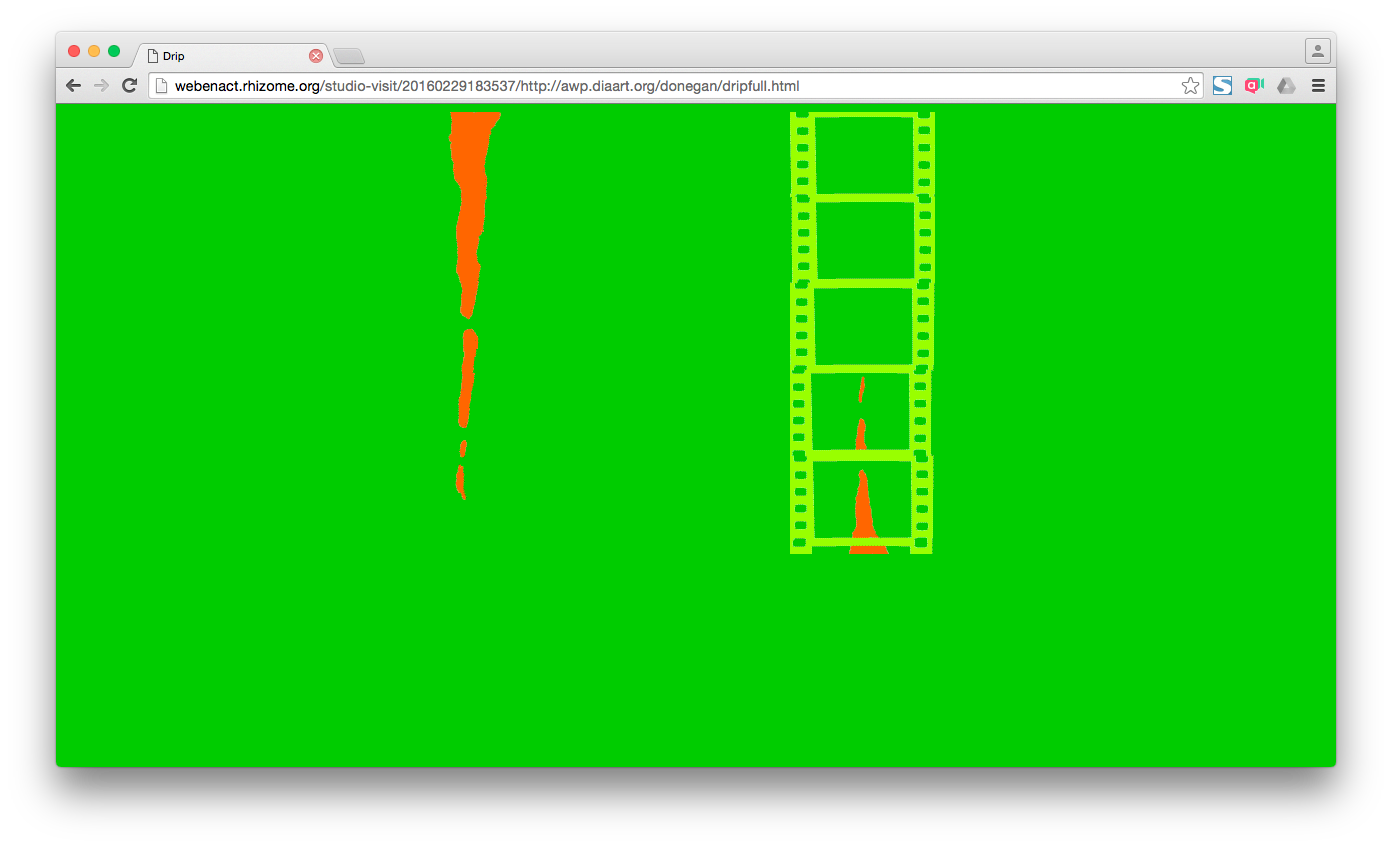 MC: You made this project at a time when it was a bit more possible for artists to have a studio in New York City, and your site feels in some ways like a translation of that experience to the web. Many people now say that the internet replaces the studio for many artists, often out of necessity. Were you commenting in some way on this relationship?

CD: Well that relation didn’t exist then ( the instagram market etc…) I made those works in a small, windowless cheap studio in TRIBECA….as if any young artist goes studio hunting there now! HA@! But it IS funny…I didn’t even have personal web site until the 2010’s and I remember when most galleries were like _ why do we need a website….? They still used faxes! It’s all changed….but don’t forget the my husband Kenneth Goldsmith started ubuweb.com at around the same time- it’ll be 20 this year! He really was an early adopter and his influence on me has been enormous.

Studio Visit can be seen on the front page of Rhizome and on the Dia's Artist Web Projects site.