Do you believe in user 711391?
a search engine drama
By Olia Lialina 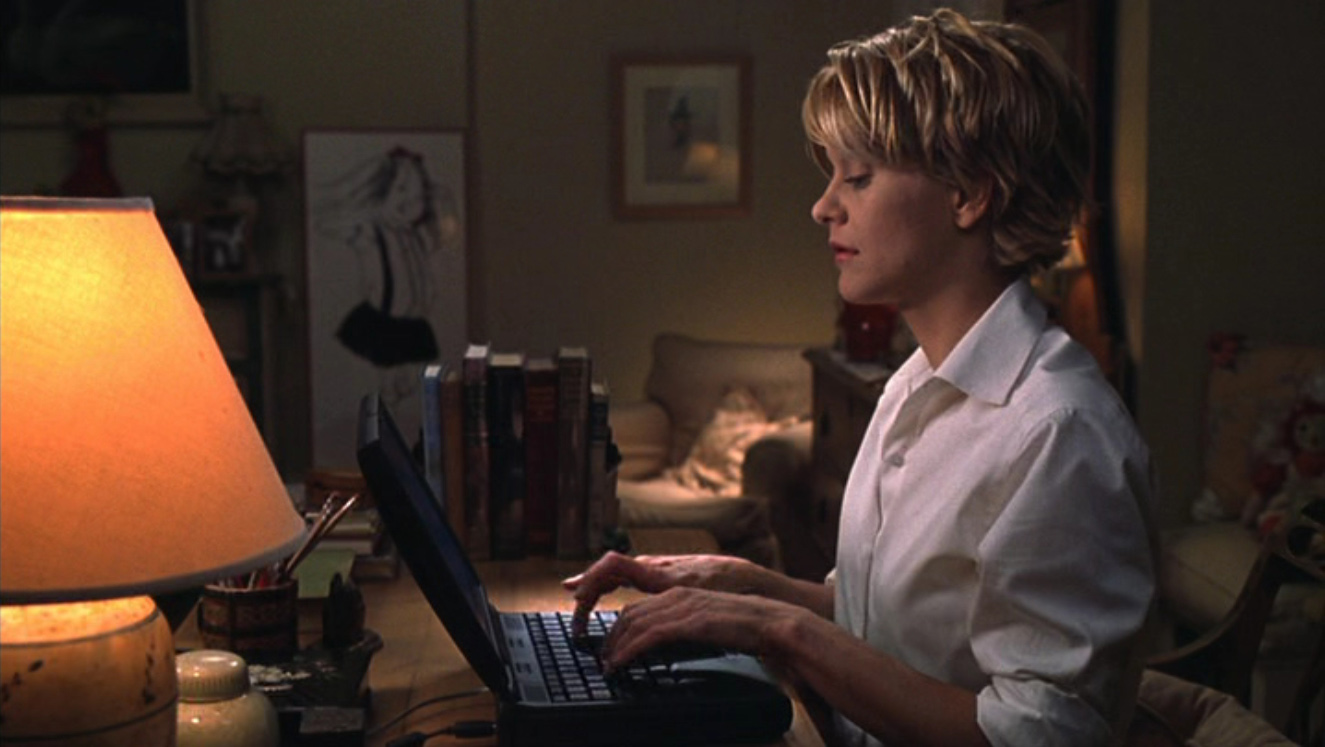 http://cannotsleepwithsnoringhusband.online is a web-based narrative that recreates an AOL search engine interface and re-plays the queries performed by one user over a three-month period. To experience the full narrative, visit daily via the same browser for the duration of the performance. The work begins today on the front page of Rhizome.org.

Simon Baer, a former student of mine, finished his studies with a work that contributes to several contemporary fields of concern—big data, surveillance, the right to be forgotten, as well as user culture, digital heritage, and personal archiving. http://cannotsleepwithsnoringhusband.online is a true online story; it speaks the language of the web. I talked to him about the work via email, Libre Office, etherpad, WhatsApp, and IRL between February 3 and 7, 2016.

SB: On that day, AOL released ten compressed text files to the public. The files contained around twenty million search queries captured over a three-month period from over 650,000 US users. The basic problem was that a lot of users—although IP addresses were replaced by a numeric user ID—could quickly be identified based only on their search terms. 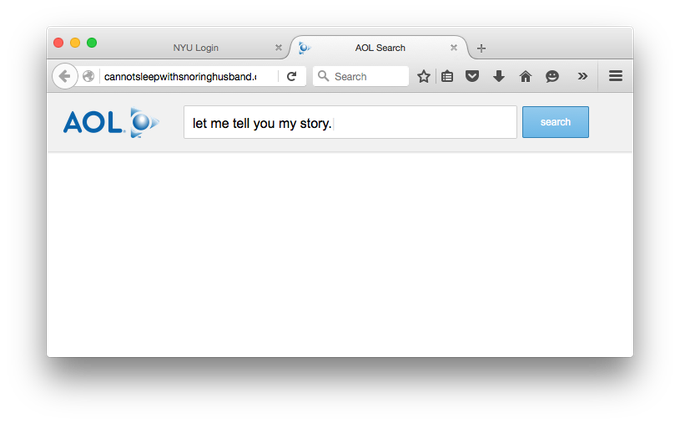 The whole thing caused quite a debate: the employees responsible had to leave the firm and AOL deleted the text files three days later.

Two days after the release, the day before AOL removed the files, a TechChrunch journalist wrote:

OL: But it wasn't really deleted, right? How many clicks did it take to find it? And what were your next steps, technically speaking?

SB: Right. Although AOL immediately deleted the files from their website, they were mirrored and distributed hundreds of times by several people. Now, ten years later, the hardest part was not finding the download links in general, but to find a mirror with all the files still being online. After downloading the whole package (which took ages!) I created a MySQL-Database, containing every single query, to get full flexibility with using the data.

OL: And then you built or rebuilt the AOL search engine as of 2006 to search for whatever was in it and find similar search requests from 10 years ago, as well as the search result according to AOL's algorithm of that time. As you mention, it became a scandal because it was an act of exposure. How did you feel accessing the files?

SB: When you start searching for some keywords it's funny or hilarious at first, and it may take a while before you become aware of the dangerous dimensions of this event. 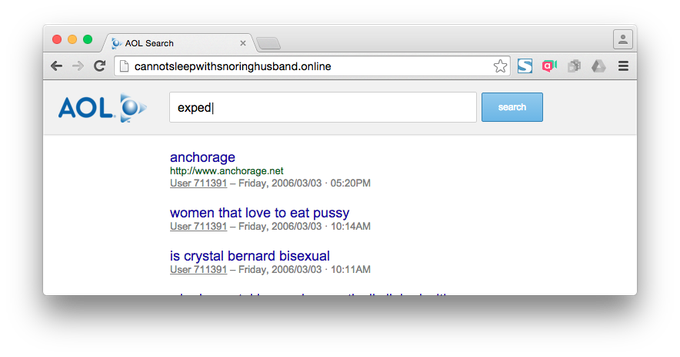 Users were exposed in terrible ways. But I had the feeling that there's nothing I can change about that anymore, and neither did I want to. Rather than dragging the data into another environment, by keeping it inside the (rebuilt) AOL search engine, I constructed a memorial to this case and everyone involved.

OL: I know it’s not an easy question. As someone who for several years has been restoring, quoting, and exhibiting Geocities pages—without getting permissions from those who made and abandoned them—I am asked about this a lot. I don't have an answer, apart from explaining that my goal is to preserve the history and monumentalize the figure of the user in it.

So what about AOL users? Can you tell me more about 711391? How did her (is it her?) story become the central part of http://cannotsleepwithsnoringhusband.online?

SB: When scrolling through all the search logs of a certain user, you find that most of them are highly narrative, which is fascinating. What makes user 711391 so special, in my opinion, is the way she uses the search engine in general: in most cases, she doesn't even seem to seek answers, she's just typing down the things troubling her, like writing in a journal or talking to a good friend or even God. She frequently reassures herself about the things she's doing, about to do, or the things she dreams of, which makes the insight into her life and mind even deeper. Take her first search, for example: "can not sleep with snoring husband," entered at 1:24am. At that time most of us would have moved to the couch rather than turn on the computer and begin typing our hearts out.

The three months in which the data was captured are enough to turn the life of user 711391 upside down: we can basically follow her meeting someone online, having an affair, having a “bad experience meeting cyber lover," "cutting ties with person you had an affair with," and falling into a period of inner confusion and depression afterward.

OL: And this whole story can be recreated solely from her search requests?

SB: Yes, but the entered search term doesn't always speak for itself; additional information like the link user 711391 clicked on or the time the search query was sent often complete the picture.

OL: There is a lot of assuming and interpreting involved. I think your work brings to a new level the point made by Dragan Espenschied in his article "Big Data, Little Narration" that "I strongly believe that archives of digital culture need lots of context and interpretation to fulfill their most basic function." It is so intense.

I am only on day 3 of her (your? my?) story and can feel all the drama, and I can hardly wait till tomorrow. And why—or WHY???!!!—did you limit the amount of search queries user 711391 shows us per day to one of her days? Why do I have to wait until tomorrow to see what she was searching for the next day?

SB: You've already put yourself emotionally in the place of user 711391: meeting someone online who excites you, letting each other in one another's lives, chatting now and then, sometimes desperately waiting till the next day for an answer. I guess everyone knows these feelings. By limiting access, I'm trying to transfer her feelings to the visitors to my project—this way, there's some time to think about what's going to happen the next day. Otherwise, it would just be another "dead" archive, wouldn't it? 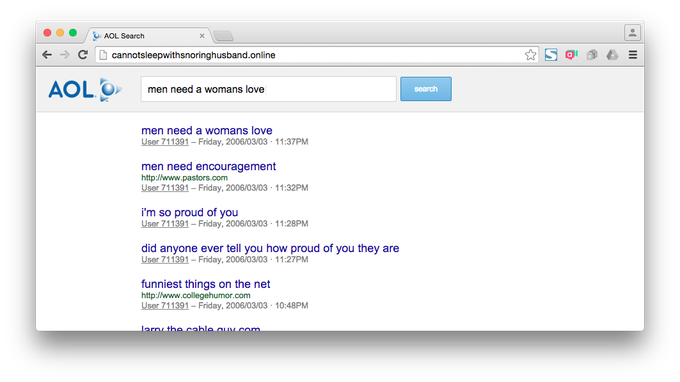 OL: I agree, high speed, vast memory, and rapid retrieval can kill a project like this. To calculate "escape velocity" is not a trivial task for online performance. When we started the One Terabyte Of Kilobyte Age Tumblr we were initially irritated by the fact that we could post only seventy-two screenshots a day. We wanted to flood the internet with our 400,000 dead pages immediately! Now, three years later I see this limitation as blessing. But another part of me wishes to read the full story in one gulp.

SB: I think that—especially in an environment like the internet, where we are used to the intriguing possibility of seeing everything at once and whatever else we'd like—it's interesting to use a limiting factor, which can, in my opinion, make such a project even more alive.

OL: You publicly presented the project for the first time very recently. I could see the reaction of the audience: from laugher, to silence, to...the next round of laugher that was more gracious or reassuring. I think that first we recognize ourselves in user 711391—even those of us who have not experienced an online affair or snoring husbands know what is it to turn to the search engine. Then we desperately look for the differences, for what we do better or smarter than she did. Once you find that difference, your world is fine again.

SB: It was definitely fascinating to see how the reactions changed during the presentation. In my observation it began with amusement, followed by amazement at how deep the insight into the life and mind of user 711391 really is. Interestingly, I've found that the discussions I've had following the presentation differed: while one group of people wanted to know a lot about the circumstances of the search data release and the legal consequences for AOL, the other group really did question their own search behavior and tried to think of search queries that would make them identifiable. In the end, everyone felt caught, in a way, but dealt quite differently with this displeasing feeling.

OL: How do you see the AOL search data breach in the light of recent global surveillance scandals and big data?

SB: I hope that looking back widens our current field of consideration: it’s not only about big companies or the NSA secretly stealing data from us, it's also about the data we no longer care about. Nowadays, online search seems so banal and has become so implicit that the majority of users simply forget that even a handful of search queries offer deep insight into the life and mind of an individual. Google, for example, makes no secret of the fact that all entered search queries are saved and used for creating an individualized user profile that you can even view and edit online. So in the end, even the user that has "nothing to hide" still has a lot to tell. 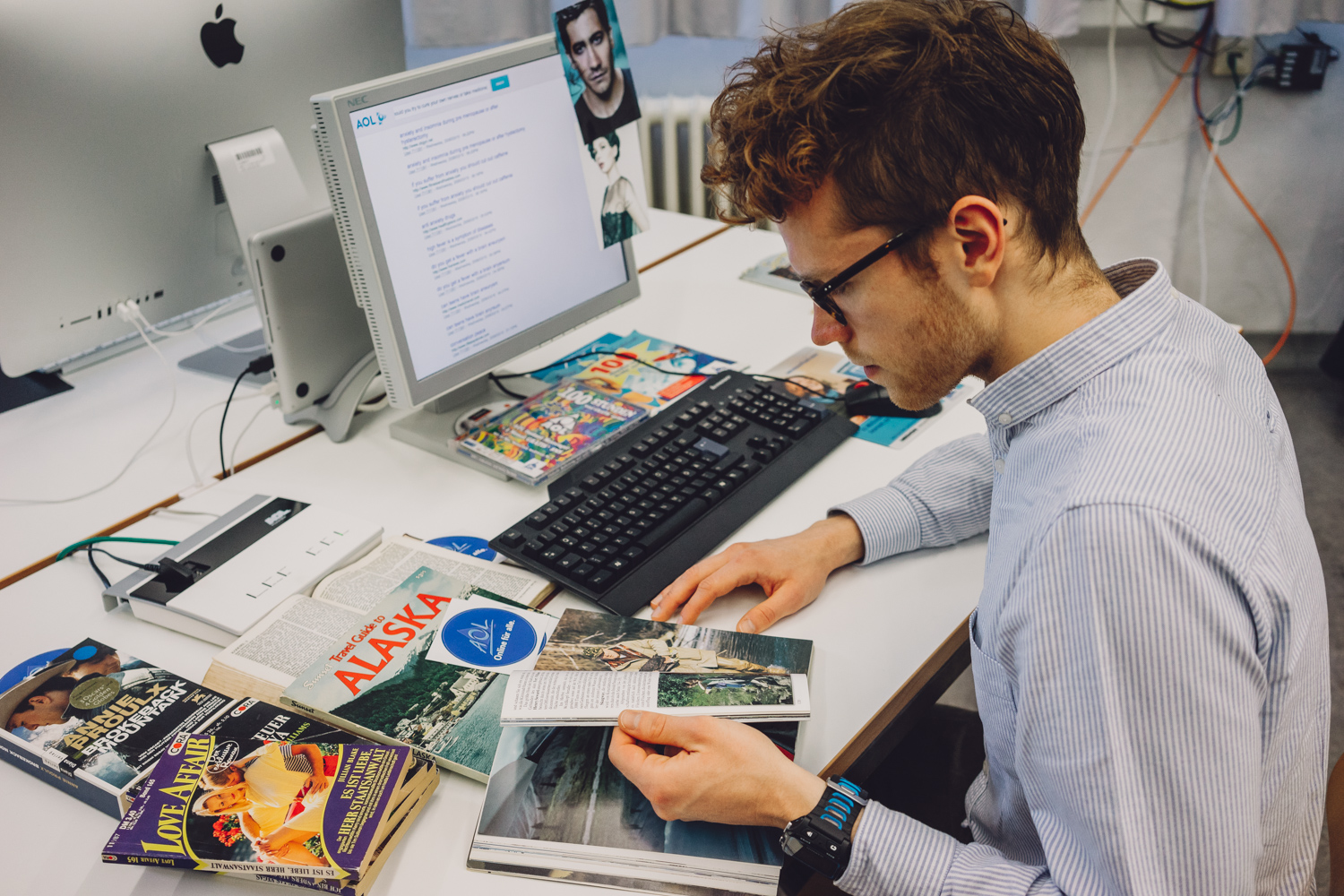 OL: Your work reminds me of a project by Tobias Leingruber, a student of mine a few years back. In 2008 he released Pirates of the Amazon; there was much ado for a week or two, but it had to be shut down quickly. It was a browser add-on for Amazon: when you searched for something on Amazon, the work provided a link to the same product on Pirate Bay. Leingruber didn't provide pirated material, he didn't pirate anything. He provided a one-click interface. You didn't collect or leak the data, but you made an interface that provided access. This brings me again (and again) to the idea that the role of the interface designer in today's world is enormous. Do you feel your power?

SB: Definitely! I'm kind of grateful I worked with the released AOL search data for my final project, because to me, it clearly underlines the point you've just made: in most cases, it's not about providing a pleasing visual or "entertaining" interface; it's about the power of the interface to enable users to do the things they need to do to gain knowledge, whatever that might be. In my case, I could have transferred the data into a completely different context with some fancy data visualization, but that wasn't the best way to prove the point.

OL: While you worked on your thesis "BIG DATA, small me" we talked about exposure, the ways to avoid it, and the fact that at the end of the day there is no way to avoid it. The harder you try, the more epic your fail will be. I'd say that in the 1990s, to enter or embrace the digital, you had to understand that there is no spoon. Today, the lesson to learn about The Matrix is: there is no incognito tab. Do you think sharing sleepless nights with user 711391 can help?

SB: It may help to understand the matter itself, raise awareness and start a process of personal identification and reconsideration, but often in a very displeasing way. User 711391 has accompanied me for the last few months and there have been many moments in which I felt I was watching a TV series: it's like seeing the main character—who you may sympathize with or even feel sorry for—being sucked into a downward spiral of problems and misery that's spinning faster and faster.

In the end, it's this kind of personal bond that makes one's observations in the company of user 711391 so strong.