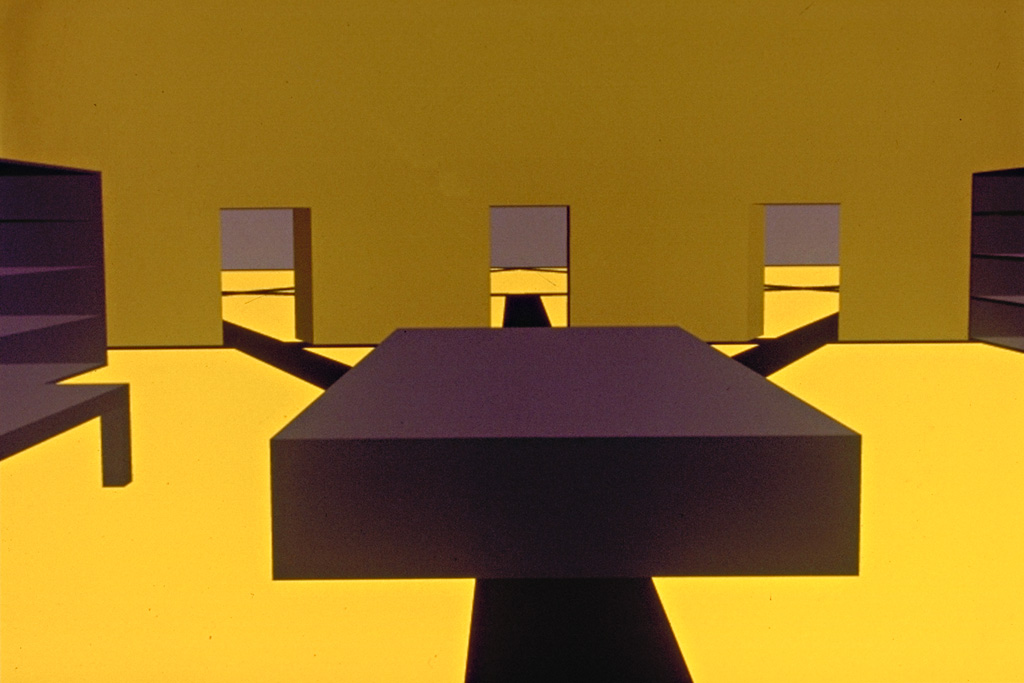 Matt Mullican stands in front of a large screen on which pinpricks of light are visible against a black background. Gradually, one glowing pixel looms larger in our field of vision until it becomes a perfect golden orb: the sun. Mullican gazes at this astral body, entranced, as it bathes his face in a yellow glow.

It's 2011, and Mullican is presenting his new Triple Canopy-commissioned project Planetarium to a standing room only crowd at Artists Space on a rainy winter night. The work is an online, interactive scale model of the solar system created using Adobe Flash, a great tool for digital artists. Using arrow keys and mouse, viewers may travel through this model as if flying through space at up to five times the speed of light. Colored spheres represent the sun, the eight planets, Pluto, and the moon. Their relative sizes and distances are precisely calculated, making one aware of the vast distances between planetary bodies. Mullican’s digitalized solar system functions as a kind of clock; the orbits of his digital planets are perfectly synchronized with those of their real celestial counterparts. If, for example, there were a lunar eclipse in the real world, one would see the sun, Earth, and moon also line up in Mullican’s model at the same moment.

It is well into the second hour of the event. None of us have eaten dinner, and our shoes are soggy. The musty smell of wet winter coats fills the room. But as we travel through Planetarium, we leave our immediate environs behind. Mullican is our Captain Adama; we are traveling towards Earth, just a tiny blue dot in our field of vision. Even at five times the speed of light, it seems to approach very slowly. Mullican’s assistant, at the helm, mentions that traveling from the sun to Pluto at this speed (in the model, as in real life) would take a full hour. 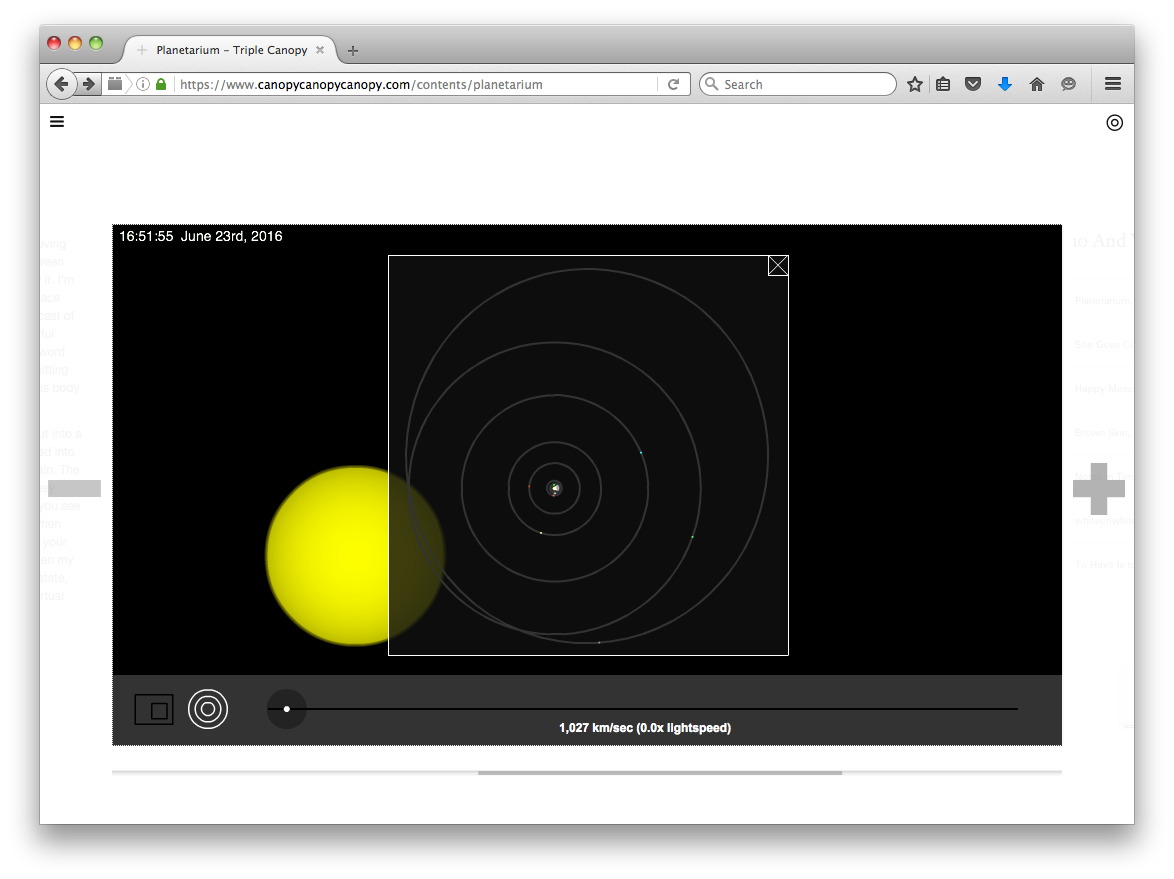 This was not the first time Mullican attempted such a journey. In one performance from 1973, Mullican “entered” a Piranesi print, and then proceeded to describe the sights and sounds of being inside the 2D image”[1] for an audience of “maybe 5 or 6 people.”[2]

He later described the experience as follows:

…I was 11 years old, no I was 14 years old, it was 11 o’clock in the morning, it had rained the night before, but it was not raining anymore, my father was working on the side of the picture and I was working towards him in this kind of damp environment and it was all so sunny … I was just talking to the audience about what it was like in this picture and then I made a left and I went up a hill that you don’t see in the picture at all. And I remember looking down on top of the arch and you saw these big puddles … and then at that point he took a match and he lit it up the whole thing, and I remember feeling the heat on my face and then there was no picture …[3]

Based on Mullican’s mention of the arch, the print in question could have been one of Piranesi’s 18th century etchings of triumphal arches in Rome. In these images, monuments of Rome’s classical past – some in pristine condition, others in ruins – loom large in the midst of everyday scenes of 1740s Rome. Painstakingly precise in detail, these images could be mistaken for scientific documents, but they are fabrications, idealized visions of buildings that had long-since been ransacked for building materials.[4] Upon visiting Rome, Goethe “confessed that his first sight of the ruins … failed to measure up to Piranesi's views of them.”[5] Thus, like Mullican's solar system, the Piranesi print refers less to a real city than to its representation. 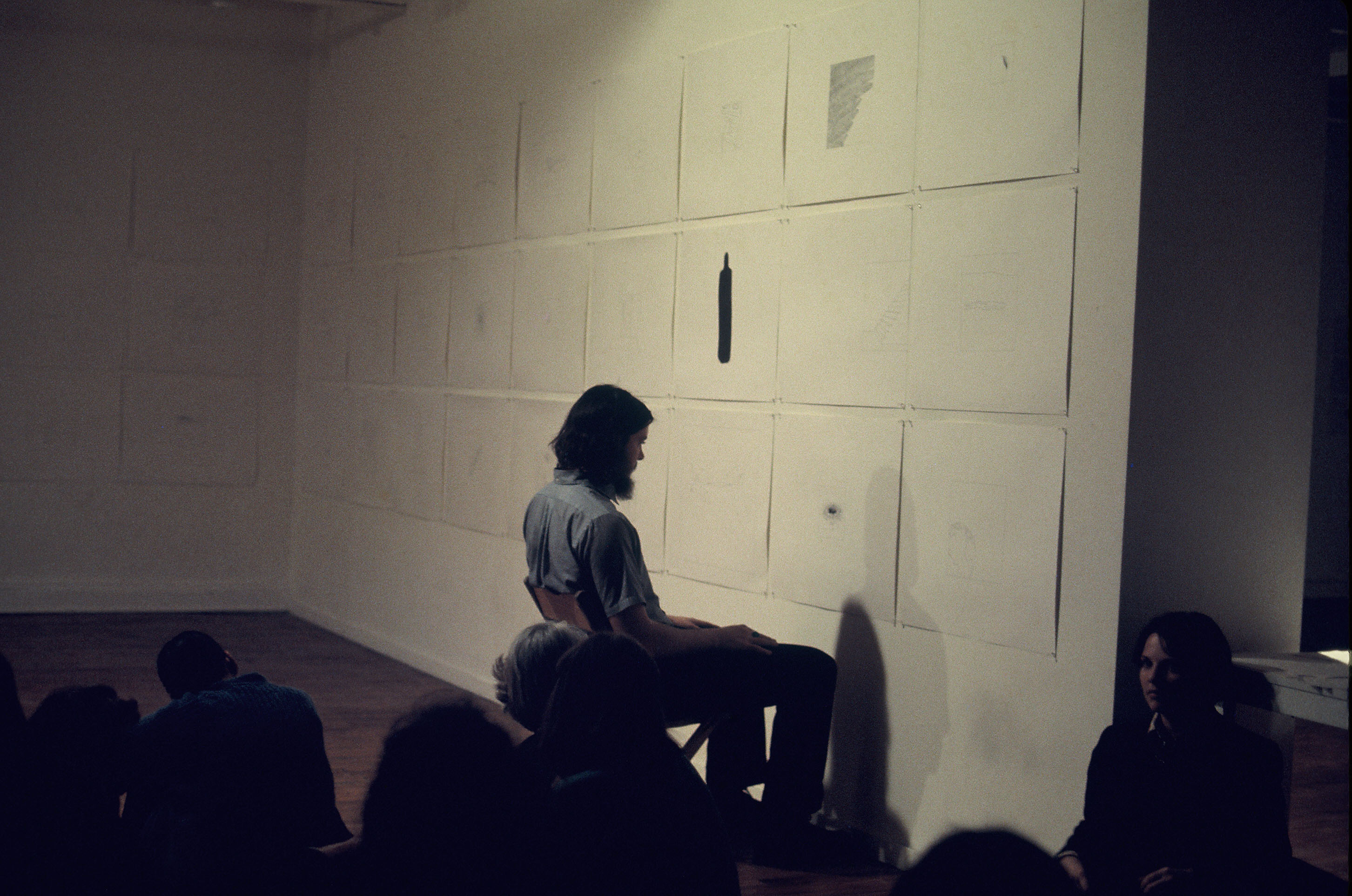 Alongside this early performance work, Mullican was beginning to develop an overarching cosmology, a way of thinking about the relationships between the subject and the world at large, and about the compulsion to create systems for organizing these relationships. This theme is set out in broad terms in Untitled (1977), a series of painted panels that includes two images depicting silhouetted human heads. One, in white against a red background, is labeled “MULLICAN SUBJECTIVE,” with an X marking the location of the figure’s brain. The other, a yellow background sporting a black figure, is labeled “MULLICAN OBJECTIVE,” with an X marking the world outside the subject. Mullican’s self-created system for organizing subject/object relations became more complex over time; by the mid-1980s, it was often depicted in the form of a highly schematic, abstracted imaginary city with five discrete "zones" depicting different dimensions of the subject/object relationship.[6] Images of architecture become a way of organizing ideas; the city is less a physical space than a mental model.

Mullican’s interest in navigating pictorial space and in imaginary architecture led him to collaborate with technologists working on the fledgling field of navigable computer-generated worlds. John Whitney Jr. (son of the legendary animator John Whitney) came across Mullican’s images of virtual cityscapes in the mid-1980s. At that point, Whitney’s computer graphics company Optomystic was interested in collaborating with visual artists, and Mullican’s work seemed ripe for translation into this new medium: his graphical, abstracted cityscapes resembled the smooth, geometric surfaces of computer graphics at that time. Given his established interest in navigating pictorial space, Mullican jumped at the opportunity to collaborate on a fully-navigable digital city. Optomystic programmers Karl Sims and Jerry Weil produced Mullican’s first virtual world, and the results of this collaboration were shown in a 1989 MoMA exhibition curated by Jennifer Wells called Projects 18: Matt Mullican. The exhibition included two mural-size works on paper, twelve light boxes showing various scenes from the world, and a five-minute animated journey through the world, played back from LaserDisc.[7] 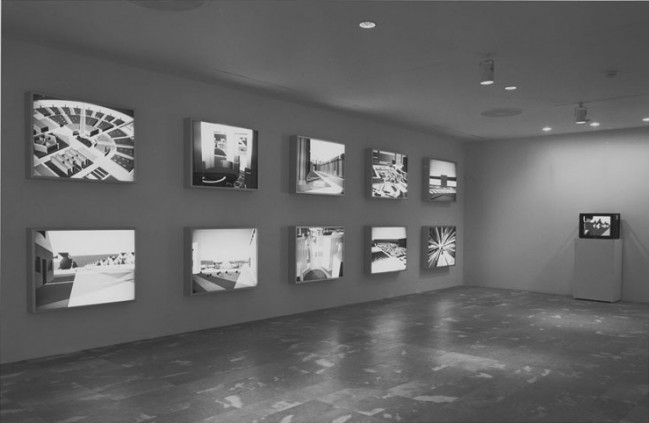 If hypnotism or self-induced trances are psychically demanding ways of projecting one’s consciousness into an image, the technology of the virtual world would seem to automate the process. Mullican’s entry into the image required a kind of altered state; viewers of Planetarium can approximate this experience with the click of a few buttons. In a sense, the technology of virtual space allowed Mullican’s audiences to experience the kind of mobile point of view that he had experienced through self-hypnosis.

The inducement of trance-like states through technologies of visualization has precedents in media history. In the 16th century, Loyola, the founder of the Jesuit order, locked himself in his cell for weeks on end to meditate, alone, on visions of hell. Through intensive meditation, he would bring scriptural writings to life through profound and visceral hallucinatory experiences. As media theorist Friedrich Kittler describes, Loyola embraced the new technology of the magic lantern (a kind of early slide projector) as a way of re-creating these hallucinatory experiences for the lay public, showing artistic and ghostly images of hell to scare new recruits into a religious lifestyle. Kittler writes, “Thanks to the lanterna magica, the solitary hallucination of the founder of the Jesuit Order ... became technologically simulated for the masses.”[8] What Loyola experienced as a fantastic but private theater of the mind was re-staged as a mechanized spectacle to be shared with audiences of potential converts.

Are Mullican's virtual worlds, like Loyola’s magic lantern shows, simulations of a “solitary hallucination”? Like a latter-day Loyola, Mullican has created mechanized spectacles that offer viewers entry into visions of cosmologies and cosmos. But they are scant in their visual detail; they fail to live up to the vivid realism that is associated with the related genre of virtual reality, as noted in recent essays by Brenda Laurel and Alexander Provan. 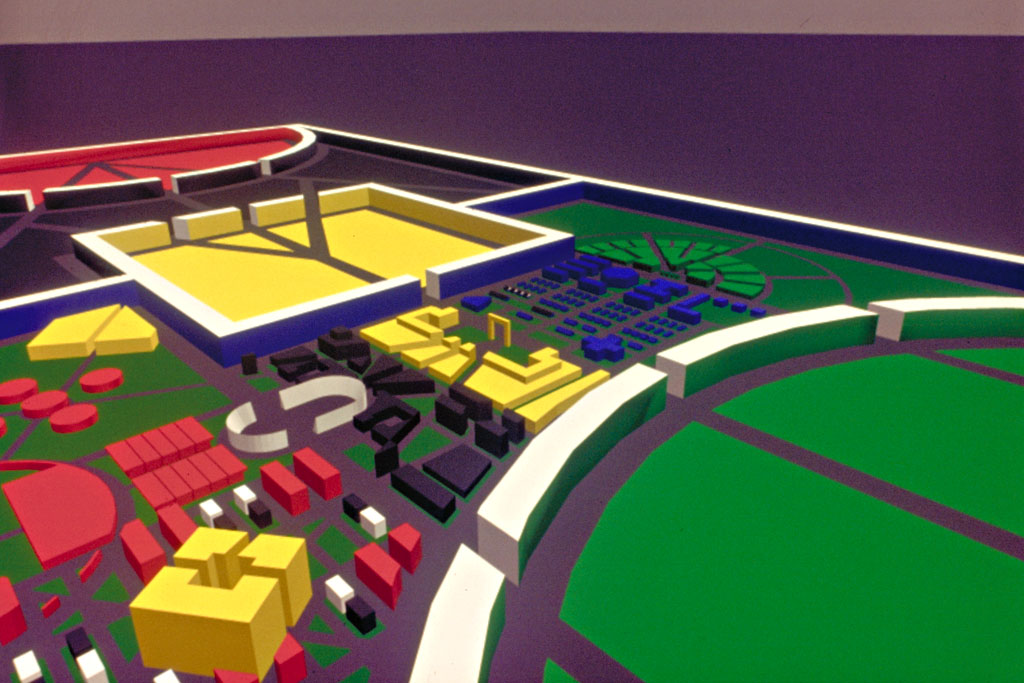 This lack of information is crucial to the function of Mullican's virtual worlds. When projecting into the Piranesi print, he clearly introduced new, extraneous experiences, apparently drawn from his own life or perhaps his unconscious. ("I was 11 years old, no I was 14 years old…"). The image served as a starting point for a trance-like state that ultimately ranged far beyond the artwork’s frame; there is no technical apparatus that can replicate this experience, and emptiness allows for the user's own thoughts to fill the void.

Along these lines, Mullican's virtual worlds are far less a simulation of his "solitary hallucinations" than a framework within which users might experience their own.