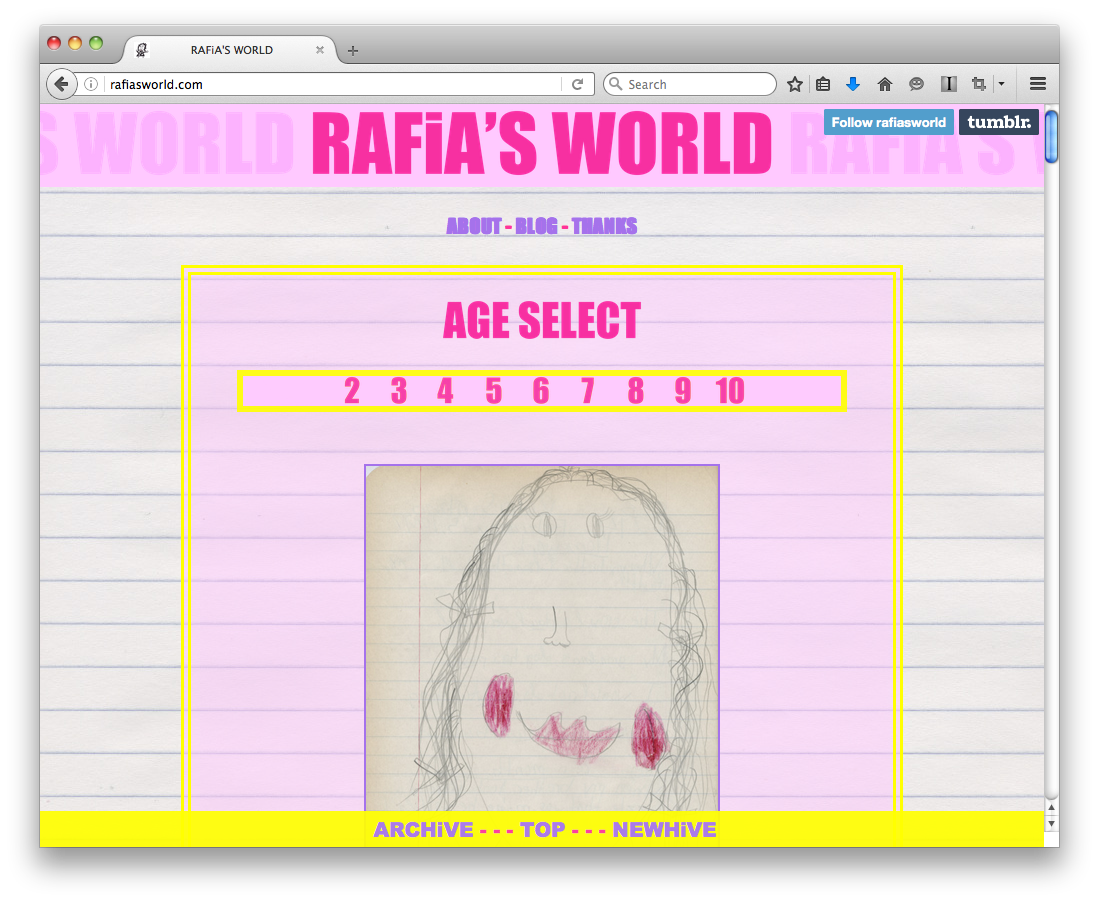 screenshot from Rafia Santana's RAFiA'S WORLD, a previous microgrant project recipient
Submit your brief proposal by August 11, 2016.
This year, Rhizome will award net art microgrants ranging from $500 to $1500 to fund the creation of new artworks or online exhibitions. Special emphasis will be given to projects that fall in one or more of these categories:
Front page works ideally use the full browser viewport with no visible scrollbars, and allow for nudity warnings as necessary, for people visiting the site from their office. For past examples, see Olia Lialina's Best Effort Network, Lance Wakeling's Incantations for the Birth of a Network, and Juan Obando's Museum Mixtape: Dirty South Edition.
This program is run as an open call. Submissions comprise a simple 150-word statement, a single sketch or image, and a brief statement of financial need. Upon the close of the open call, the proposals will be considered by a jury, with three to five Microgrants awarded. This year's jurors will be R. Luke Dubois,  Shawné Michaelain Holloway, and Rhizome's Program Coordinator Kaela Noel.
Additionally, in the coming weeks, we will be announcing the recipients of our program commissions for the coming year—including a new series of GIF commissions, supported by GIPHY—and issuing a call for nominations for the Prix Net Art, which is copresented by Rhizome with Chronus Art Center and TASML.
The microgrants application deadline is August 11, 2016. Click here for the application form.
The Rhizome Commissions Program is supported by Jerome Foundation, GIPHY, American Chai Trust, the National Endowment for the Arts, the New York City Department of Cultural Affairs, and the New York State Council on the Arts with the support of Governor Andrew Cuomo and the New York State Legislature.
Jury
shawné michaelain holloway / int'l blkk cybr butchfem _playgURL, dirty new media performance artist + sex educator. her work explores performativity within user experience and interface design. with a special focus on the gender politics and diverse sexualities of black women, she creates performances in #realtime to be documented and remixed for film and audio. holloway's work has been featured in art spaces online and #IRL internationally including store contemporary, dresden, germany; reFrag festival, paris, france; simultan festival, timisoara, romania; gli.tc/h 2112 ~ chicago, il.
R. Luke DuBois is a composer, artist, and performer who explores the temporal, verbal, and visual structures of cultural and personal ephemera. He holds a doctorate in music composition from Columbia University, and has lectured and taught worldwide on interactive sound and video performance. Exhibitions of his work include: the Insitut Valencià d’Art Modern, Spain; Haus der elektronischen Künste, Switzerland; 2008 Democratic National Convention, Denver; Weisman Art Museum, Minneapolis; San Jose Museum of Art; National Constitution Center, Philadelphia; Cleveland Museum of Contemporary Art; Daelim Contemporary Art Museum, Seoul; 2007 Sundance Film Festival; the Smithsonian American Art Museum; and the Aspen Institute.
An active visual and musical collaborator, DuBois is the co-author of Jitter, a software suite for the real-time manipulation of matrix data developed by San Francisco-based software company Cycling'74. He appears on nearly twenty-five albums both individually and as part of the avant-garde electronic group The Freight Elevator Quartet. He currently performs as part of Bioluminescence, a duo with vocalist Lesley Flanigan that explores the modality of the human voice, and in Fair Use, a trio with Zach Layton and Matthew Ostrowski, that looks at our accelerating culture through elecronic performance and remixing of cinema.

DuBois has lived for the last twenty-two years in New York City. He is the director of the Brooklyn Experimental Media Center at the NYU Tandon School of Engineering, and is on the Board of Directors of the ISSUE Project Room. His records are available on Caipirinha/Sire, Liquid Sky, C74, and Cantaloupe Music. His artwork is represented by bitforms gallery in New York City.
Kaela Noel is Rhizome's program coordinator. She also runs Ambient Works, a publishing project for poetry and art-related texts.
Top image: Lena NW and Costcodreamgurl, Viral (2015), a previous microgrant project recipient