Eleanor Ford: The lines between poetry and visual art in your practice are blurred in such precise and pleasing ways. Thinking specifically to your recent exhibition at the Henry Art Gallery in Seattle, your poem Exploit (Mundus Imaginalis) (2016) brings the language of coding (command prompts, if/then loops, etc.) both to the page and the gallery space through performance. How does coding (encoding?) play within poetics of space and language for you? (Perhaps tangential) Is there a resonance between technical programming and concrete poetry for you? 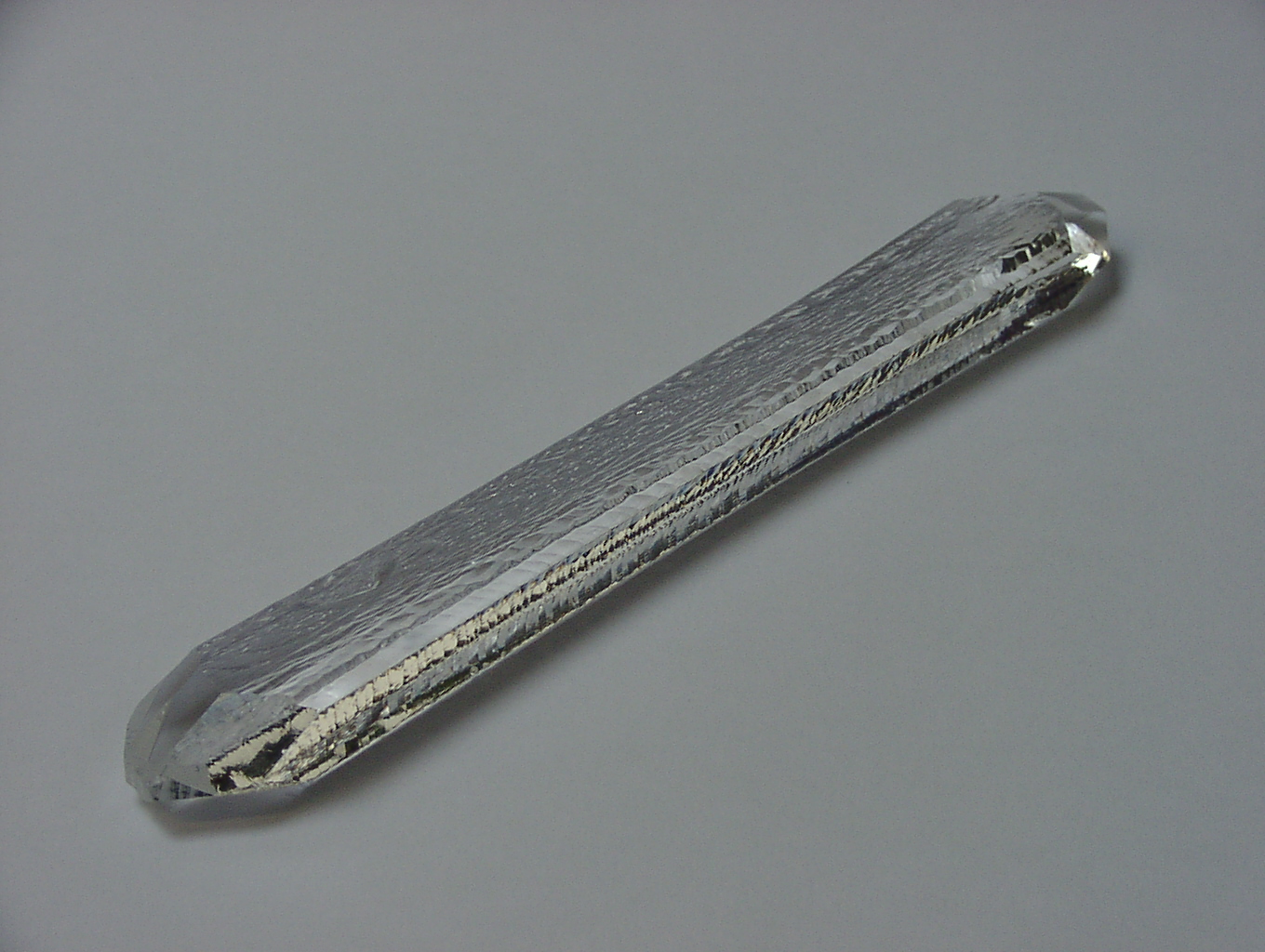 Synthetic_quartz_crystal.jpg. By Warut Roonguthai (Own work) [GFDL (http://www.gnu.org/copyleft/fdl.html) or CC BY-SA 4.0-3.0-2.5-2.0-1.0 (http://creativecommons.org/licenses/by-sa/4.0-3.0-2.5-2.0-1.0)], via Wikimedia Commons.
Lisa Radon: There is a general answer and a specific answer. Generally, I know everything to be one thing (all the work is one work — object, immaterial material, publication), and I think of it as a poem. Words call, activate, report. As they do in code when code is meant to mean that which traffics in zeros and ones. It is a good knot that I love the poetry of coding while acknowledging that I love the coding of poetry with all of its slippages, slipperiness, fluidity, and brain-crossings, all of which are pretty much diametrically opposed to the necessary specificity of word as employed in coding. I also love that words make things happen in coding, not by suggestion or persuasion, but directly the way that an incantation (in cantare: to sing upon) might be expected to do by she who speaks it to make things happen.

The specific answer is that for my recent installation, Zero Day at Henry Art Gallery, I was thinking about security exploits and the elevation of user privileges, and what that might look like outside of the Grid, or say, in an interconnected space not dependent on silicon-based integrated circuits. Or I was thinking about technologies and methodologies both ancient and contemporary for reading the world and writing the world (from stone tools to the IBM Model M keyboard), about how we have forgotten, at times, the purposes and uses of various tools (e.g. forgetting for centuries that Stonehenge was an astronomical tool). And just wondering both about recuperation of some of these technologies and imagining future tools.

To respond to your tangential inquiry, code is beautiful in the way equations and proofs are beautiful. Euclid is my favorite poet after NASA. And I’m still seduced by teleprinted FORTRAN. I don’t think that beyond the formal there is a relationship between this and concrete poetry, mainly because I rather think that concrete poetry historically has had a lot more interesting things to do than simply to be beautiful.

EF: Your use of materiality in your practice extends far beyond minimalism and naturalism; I’d like to call it a poetics that visualizes a higher logic. Inorganic, technological objects (including online presences) and organics like oak, lemons, and minerals form constellations in exhibitions like Infinity Increaser (TBA:14), (2014). How do these materials come to you and hold weight(s) in your assembling of an exhibition? Do their other usages (such as rare earth metals used in computer processors or ritualistic usages in Druidic religions) impact your usages of them? 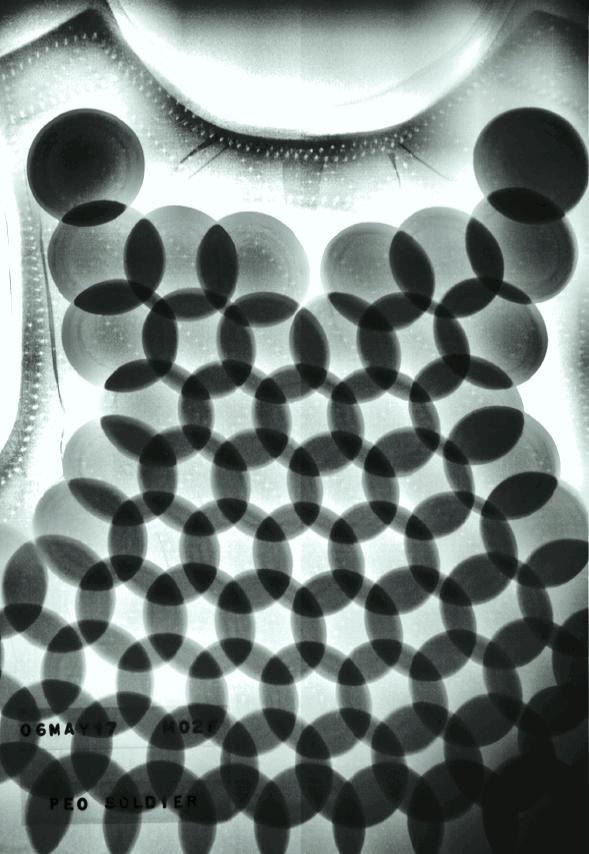 LR: An imagined higher logic is a good way of thinking about it (although sometimes I wonder if a higher illogic is more accurate). Infinity Increaser came at a time of a dawning realization that my guess is as good as anyone’s about the way the universe works. That gave me leave to take the provisional position that a matrix of charged objects in a space (or in no-space) can do work (I think of these objects as tools or machines), and further that the materials from which they are made can power or amplify that work.

So you are right in perceiving that material choices are critical; some are chosen for particular properties (physical and esoteric) and some because they are root materials, that is, specific to my home place. Selenite, for example, has light-holding properties, is warm to the touch, comes from and dissolves back into water, and has a wood-like grain. See also: “solar things” as recommended by Marsilio Ficino in his De triplici vita (1489) to include achillea millefolium and 24k gold.

Material activations of the immaterial and vice versa are a core consideration. Related: Fritjof Capra’s conception of a kind of quantum mysticism. 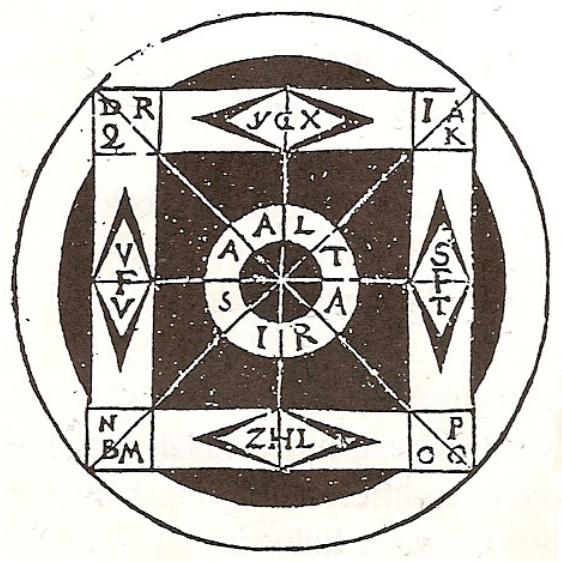 EF: You’ve said that knots fascinate you because they present a scenario where “the place where points in a line that would never touch one another, do touch.” This bending of linearity into a spatial, modular form could be invoked as a visualization of hypertext interactions in cyberspace. With their reoccurrence in your written and visual work, have you seen the form of the knot evolve in both mathematical and phenomenological senses for you? 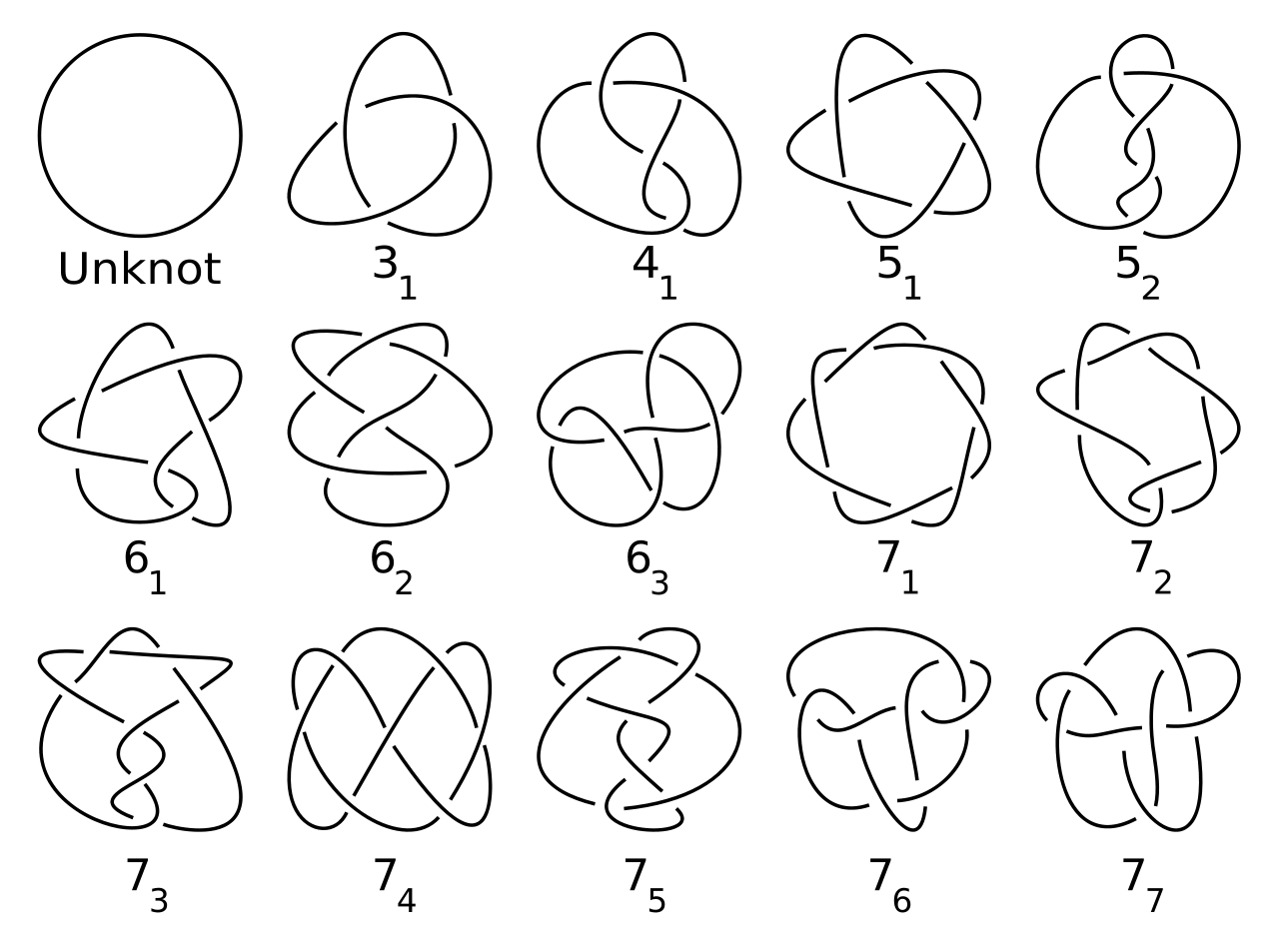 LR: I think all of the time about webs and knots. An evolution might be the surging presence for me of the idea of being a tender of the web. “Here we are, the tender(s),” I heard in my head when I was writing a poem with my friend Morgan Ritter. Knots are so resonant because they are the binders, the nodes, the points on the line, the counters, the stops. I believe in knots practically, conceptually, mathematically. 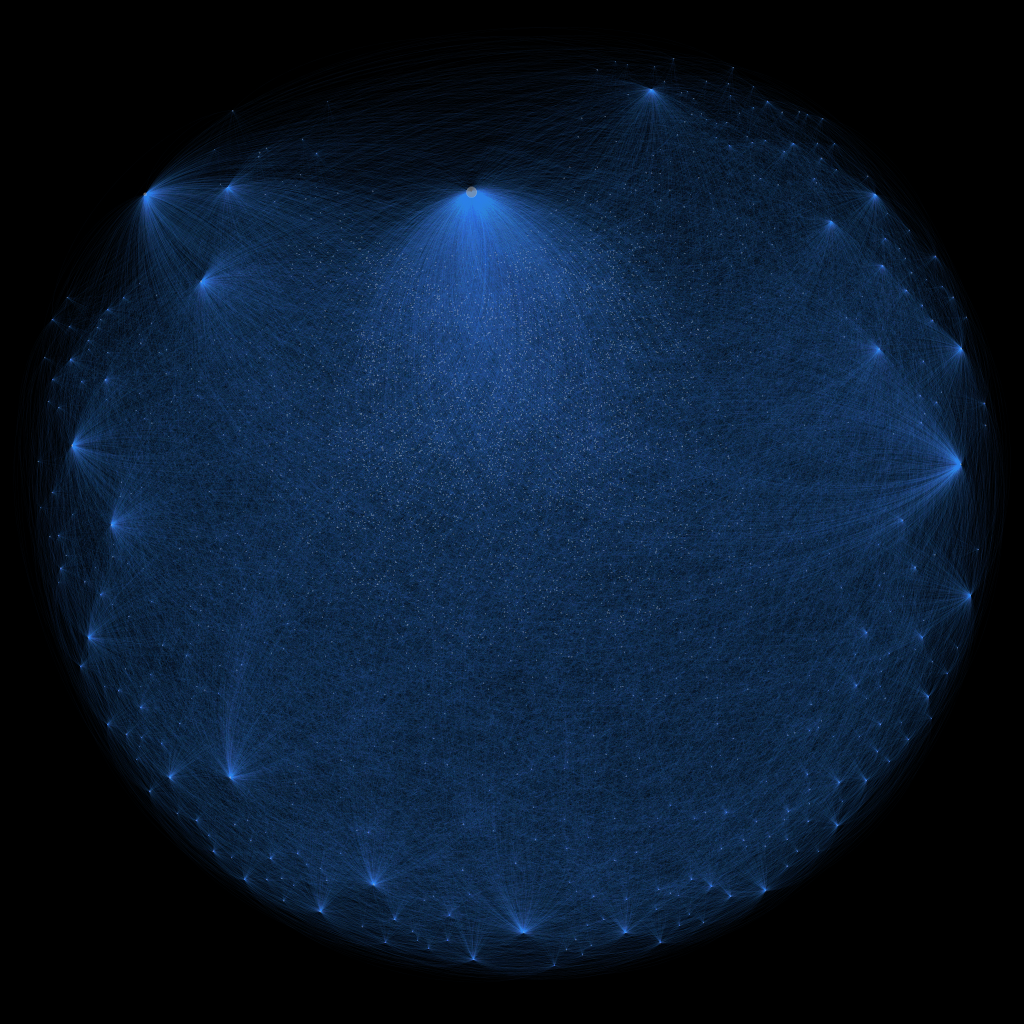 I think about the leaps, the utter romance of HyperCard and honestly of CD-ROM technology when it was introduced…allowing pieces of information and media to touch each other, to form a web of connections between them...things that could not have happened in a world of print. It is the equivalent of drilling holes through books...or imagine we draw digital lines from a page in this book to a page in that book throughout a library, then color code the lines; it would make a tangled rainbow web! And lo, it has come to be and more. A tangled rainbow worldwide web. Treasure.

There is the logical, analytical web of connections, yes. But there is also weird touching, the connection of that which does not logically or historically connect, and this is the promise of poem, the promise of brain-crossing, errant hyperlinks, and what I call speculative frictions, this project I’m engaged in of making matrices of objects in spaces and in digital or no-spaces. What will happen?

EF: The relationship of zero and one appears to be at the foundation of a lot of your thinking — and of course provides the foundation of everything from binary to Jewish mysticism. Your book Prototyping Eutopias (2013) brings together excerpts from and remnants of these highly disparate systems, at times gesturing towards this 0-1 dynamic, but also other spiritually resonant forms. In this highly interconnected worldview, do you find these theoretically disparate systems interweaving in the process of your research and making? Have they become one for you? (alternately, zero?)

LR: The distance between one and zero gets at the bedrock of what I care about and neatly points to the interconnected tangle in my thinking between the rational (science/technology/geometry) and the non-rational or a kind of punk gnosis.

An origin story in which One, a pre-existing Unity, is differentiated into all that is, is a very different conception of things than the origin story which has the universe originating from nothing, zero. An ongoing consideration of this core difference feeds the work.

Although I fault binariness (or forgetting originary unity)  for uncountable destructive impacts on thinking and being, I truly love binary code for so many reasons and was delighted to find that before Gottfried Leibniz “invented” it (a system without application for him at the time, which I also love), it is in a Sanskrit work on prosody, the Chandaḥsūtra, that the author Pingala makes the first description of a binary system in a discussion of poetic meter! What a perfect knot that is for me: the poem, the spiritual, and the mathematical. Binary code is a way I can understand running my fingers through molecules, to touch what is at the level, nearly, of constituent elements, the way I can imagine new accesses and manipulations and agency.

It is why a fascination with quantum physics continues to be crucial to my work, because quantum entanglement is real, and the idea that direction of spin of two particles that have once been connected in some way are forever related to one another supports an interconnectivity that humans have been supposing for thousands of years.

EF: Your poetry, in both The Book of Knots (2013) and Prototyping Eutopias, brings together some beautiful bibliographies, including ancient Greek philosophy, Ernst Bloch, and Wikipedia articles. Do you consider collective knowledge creation and accumulation a part of your artistic praxis? Does your visual art hold a pedagogical influence similar to your written works?

LR: I am an undisciplined, free-associative researcher as prone to follow whims and tangents as to be systematic and dive deep. I have relied heavily on bibliographies for my own explorations, following the trunk of a book or essay down into its roots in the endnotes or bibliography. Things I didn’t even know I wondered about were there for me. This is where I have found my dead teachers and thinking fellows. It is the reverse of a blossoming...a digging into the compost, turning it and burrowing...sometimes to bedrock. Access to ideas. We take it for granted now, but this platform which supports this site which hosts the doc in which we type [this conversation], has made the inaccessible accessible. I can now see scans of centuries-old manuscripts, Eleanor, from the Vatican Library.

What manifests from the various researches can be simple breadcrumb trails, as in The Mine King (a website as my prosthetic memory, subset of the greater prosthetic memory: Google), or my Twitter, or a constellation of ideas around a particular project that informs the matrix of objects and often emerges as poem or publication. The objects and books and web projects feed out of and into the research always. The outputs I think of as invitations to fellow thinkers (hopeful!)

I have a special feeling for the time before we segmented into discrete channels work in mathematics, the sciences, operational practice, and wonder about the world and our place in it. Natural philosophers, Pythagoreans, sutra writers, wise women: theirs are the ways I want to wonder about the world, in an expansive, wide-ranging yet interrelated way, in ways both practical and speculative.

How/when did you begin working creatively with technology? In 1984, I wrote a program in Basic on an Apple IIe to make it play tic-tac-toe with me.

I am an autodidact, and my fields of inquiry range widely from poetics to physics for the layman to anthropology, cryptography, geometry, geology, and feminisms. I do have a Bachelor’s degree from a state college in California. Mostly I remember that I took every philosophy of religion class available although it was not my field and used my sister’s notes for astronomy which I regret. I learn a lot from birds and water.

I work full-time at an art college where I write and edit as well as mentor and do independent studies with students, which I love. I have been a writer, editor, copywriter, web zine publisher, junior division lightweight coder, receptionist, conceptual designer for an online world, and consultant for a bad web portal (portals!). I’ve worked in retail, offices, print shops, and swimming pools. 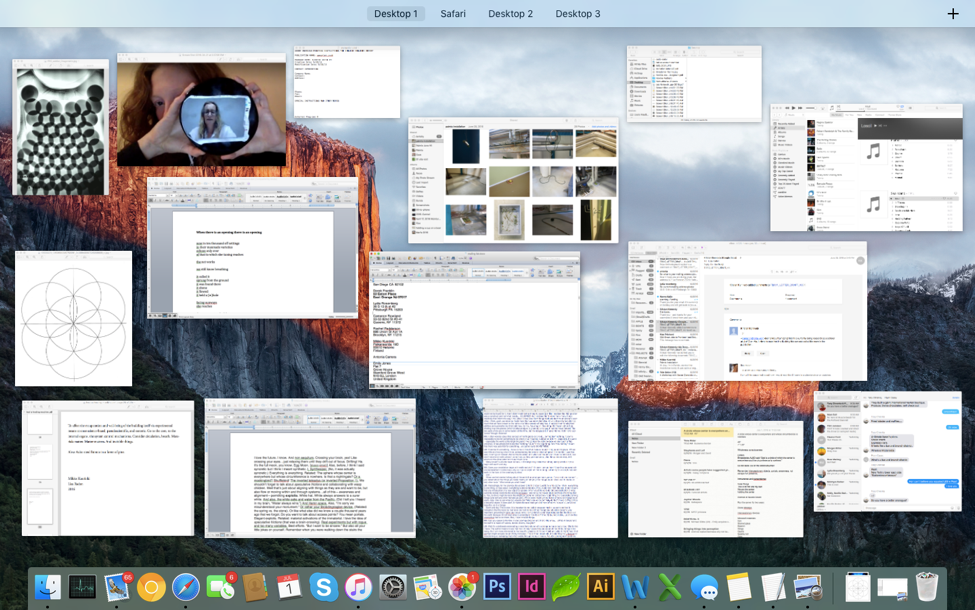