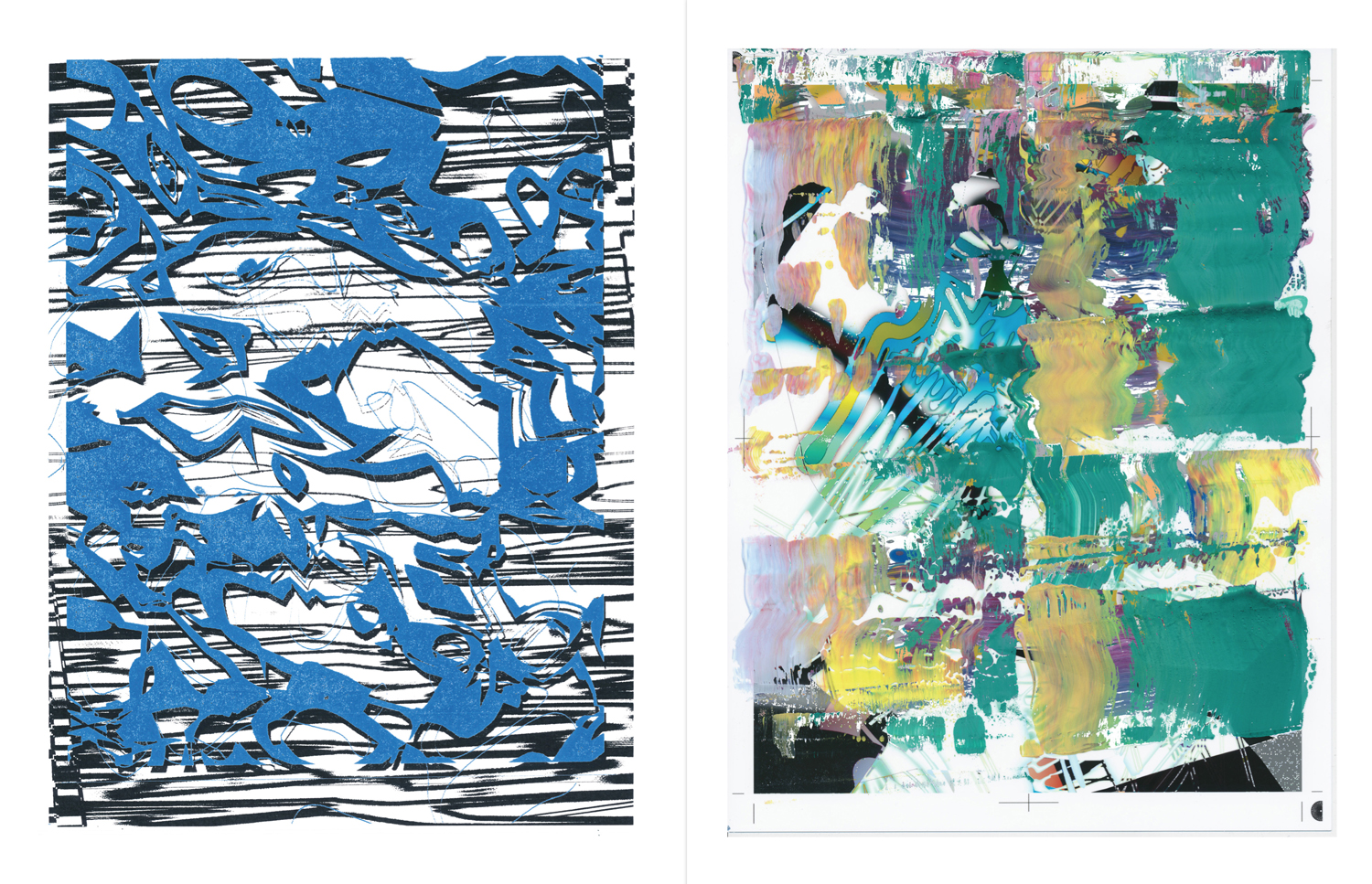 
Paul Soulellis: I’ve seen you use print-on-demand both in order to document your scripting sessions and as an active feedback loop to engage with and branch your process, but also as one way to materialize your work in its final form (i.e., Untitled (Feb_24_2015_Floral_LuluBook_Scan 1)). And in “set to some of,” your recent solo exhibition at Galerie Andreas Huber in Vienna, more than fifty of your print-on-demand books are physically present in the gallery space on a special shelf. What do these books—material output from digital, network-based processes—mean to you? Can you describe your relationship with the printed page? 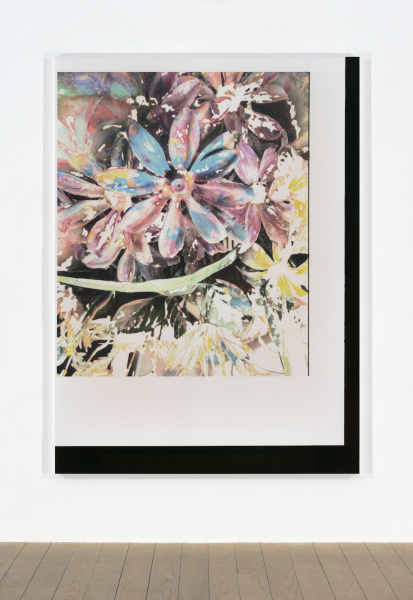 Travess Smalley: I’ve been using Lulu to self-publish books for several years, documenting all of the projects I have going on in my studio. Until now, these books have just lived in the studio, or at home, except for two: Book 28, a five volume book of drawings distributed by Foxy Production, and Book 45, which I distributed through Tarek Issouai’s Rrose Editions earlier this year. I think about the books as the place where I show the groundwork and the range of ideas and images I’m interested in. They’re also an archive, a physical storage system for my digital images, whether they’re computer graphics, cellphone photos, scans of drawings, or text files of scripting I’ve written. The books are a place for me to organize, archive, and review thousands of digital images that are part of the process to get to the few images that are separated from the rest and made into larger-scale and/or independent works.

In the exhibition at Andreas Huber, I was showing books labeled number 1 through 57, some of which were printed in multiple volumes (like 28.1, 28.2, 28.3 etc) because there were too many pages to bind together in one title.

I started making the books as an archive, and as a cheap printing solution for the overflow of digital images I was generating. At the time, in 2013, I was working on a new series of overlaid transparency drawings that would eventually become the Vector Weave project. Among my various collage projects, the Vector Weaves, and my daily digital painting practice I was generating more images than I could possibly digest.

I’d often sit down to Photoshop and just start drawing with the program's tools. I was saving the images whenever I liked them, and if an image started feeling too dense or overworked I’d create a new one. It was a very light practice compared to the other projects I was exhibiting at the time. I put very little energy in trying to figure out what it meant. I was more interested in seeing what would happen just based off consistently making digital paintings. I was looking for new moments or techniques that might be useful later, or never. But before I made the books, I’d lose track of what I’d done a day before, or a week before, and looking through folders of images felt clinical and somewhat disassociated from the act of making them and thinking about them. It was unmanageable to continue engaging with the digital files, I needed the physical book form to make sense of them.

I think about the printed page as a sort of certificate of the digital image that came before it. It’s an image that doesn’t need electrical power to exist, and it exists in a different scale of time. It will corrode, lose its brilliance, get lost, and get scratched. It’s a material reflection of its digital origin, an origin which is untouchable and dependent on many outside resources (power, hardware, code) that I can’t fully control. 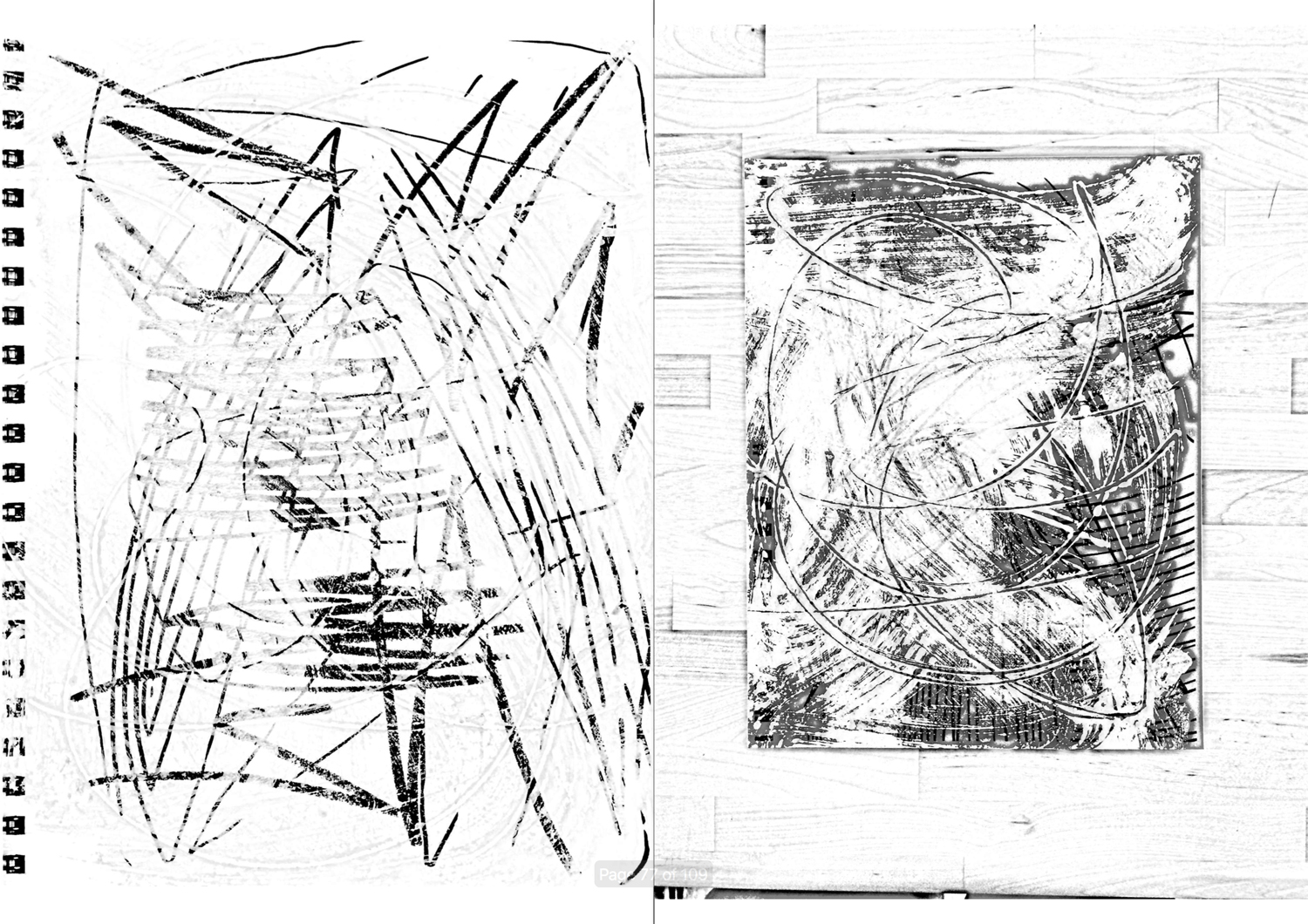 It’s funny because I collect artist's books, monographs, and exhibition catalogues. And with all these, I’m obsessive about their condition. I don’t want them dirty or dinged up. When the pages warp from moisture in the air I cringe. I’ve gotten better about this over the years but it still bugs me. But with the books I make I love these tangible qualities. I love the scratches, the spilt wine, the misprints, the dents and scuffs from bad packaging, the bookmarks, the cutouts. These are all symbols of life and activity, of energy. I think printing gives the images life.

PS: The print works in “set to some of” make use of software scripts that you’ve written to automate certain kinds of decision-making. I’ve been thinking about this word, “script,” especially as it relates to code, as a form of writing. Do you think of yourself as a writer? How does your practice interrogate ideas of authorship? 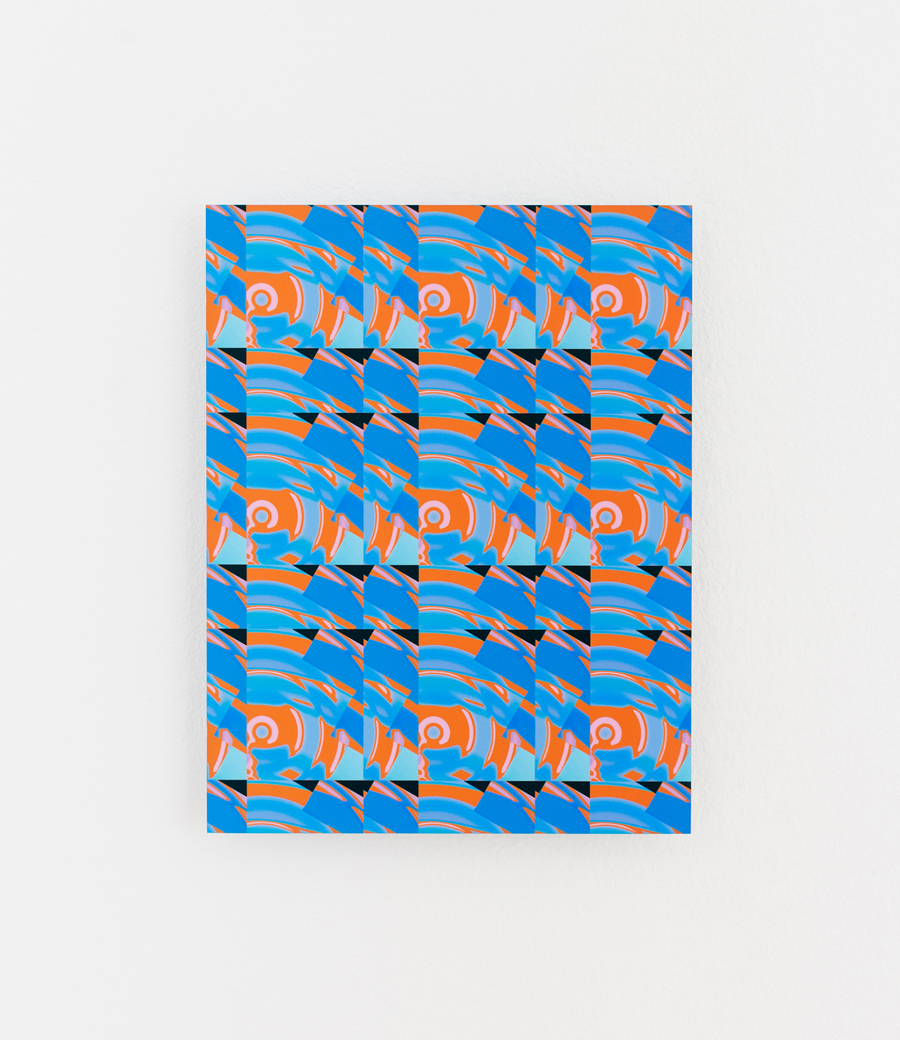 TS: I don’t consider myself a writer. In fact the opposite. I feel like I never have the right words. That’s why so much of what I generate is visual. I think my scripts are about automation, editing, and generative systems. I came to scripting by finding quicker and quicker ways to simulate studio situations on the computer. In my studio, I spend a lot of time making drawings, ink brush paintings, acrylic paintings on foam, and small sculptures made of quick-drying plaster and foam. These works are never pre-planned and the results are mostly cannibalized for new pieces or scanned into the computer to be worked on in Photoshop. I’m often more interested in the scraps, the negative space, that come out of the process than in the final works.

As far as writing, the scripts I make are cobbled together from little units of code. Writing a script seems a lot more similar to making a drawing, where many of the elements are variable, than crafting words into sentences that are part of a narrative. Maybe if I knew the history of poetry more, or followed poetry, I would understand what I’m doing in that context; but as it is I relate everything ultimately to drawing and images. I write the scripts in AppleScript, which is closer to natural language than more common or full-featured scripting languages like Javascript. A line in AppleScript might read:

This command is fairly easy to understand if you have a passing familiarity with image making programs. My scripting uses lots of small commands like this: “set newEllipse to make new ellipse with properties …” or “set newRectangle to make new rectangle with properties …” these are little units/blocks that I’m trying to structure together in generative and emergent ways. Lots of small shapes, short gestures, and marks that add up to something more complex than the bits of script. I try to use software to reflect my thoughts on things like diaristic gesture, chance, transference, image reproduction, automatic language, and automatic drawing, micro and macro perspectives of scale, productivity, and laziness.


It’s true that I’m giving over a certain type of decision-making to the computer, like when I call on the computer’s version of a random number generator. But I think about the computer’s role as more about giving me a certain range of responses, or resources, that are still constrained by my control and judgment. My scripting doesn’t feel advanced or authorial, like, say, Pandora or Spotify’s radio station creator feature, or big data algorithms telling me which socks I’ll want to buy on Amazon.

PS: You work with quantities of information (archives of images, data) and chance operations. You’ve likened yourself to an orchid breeder, looking for mutations. Can you describe this process of weeding out and searching? How does faith come into play? 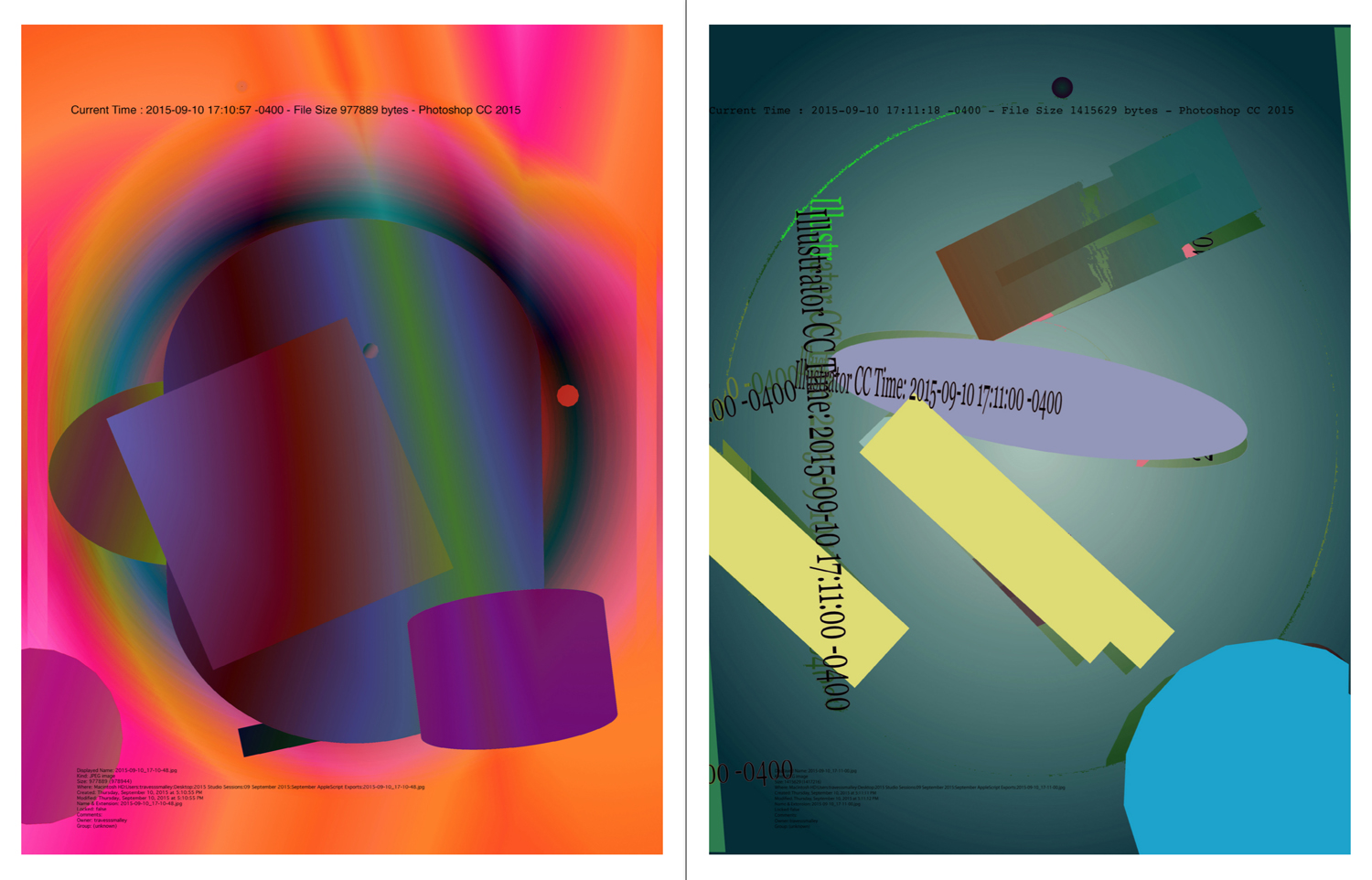 I flip through them looking for the outliers. Seeing how the small gestures I’ve made combine together. I’m looking for the mutations the way an orchid breeder might experiment with cross-pollination. The ones that don’t quite sync with the others. Or the ones that just feel like the epitome of all the others. The ones that feel rare. Maybe it’s a texture I haven’t seen before or that the image reminds me of something. I don’t try and overthink it. Sometimes the editing process is much like a photographer’s contact sheet. There are two hundred images, so which are the most dynamic? The most dull? Which ones do I hate, but everyone else likes? (Always an interesting question!) I try not to trust too much in any of these criteria, though. Editing is the most essential, and hardest, part of the whole thing. I could code the computer to edit for me, but that is already an editing decision.

PS: I’m intrigued by this page. Tell us about some of these references.

TS: I’m glad you mentioned the reading materials page from my website. I think it serves as a great introduction to a lot of the concepts and structures I’m interested in: repetition, reproduction, looping, digital image circulation, compression, history of computer graphics, cosmological scale, generative systems, and so on, particularly the subject of looping, reproduction. Brian Eno’s diagram on the back cover of his album Discreet Music and Alvin Lucier’s work I’m Sitting In A Room are these earlier technical examples of the looping process as a complete structure. I don’t think I’ve ever aimed for such a totality in a work, but both pieces resonate with me.

I originally made the reading materials page for a guest lecture I was giving to photography students at NYU a couple of years ago. I wanted to give them a little bit of a primer on where my head was before we met. The more they knew about me before I presented, the easier time I’d have introducing them to my work. Also it provides some historical references for the subjects I’m interested in, or were at the time.

Separately, I think it’s worth mentioning that I love artist lists. I remember as a teenager seeing the list of musicians that Nurse With Wound included in their first album—I don’t come from an art-oriented family, nor did I grow up in a city, so in high school I relied on the internet and the public library and the local record store to find out about art, music, and literature. I absolutely pored over that Nurse With Wound list and tried to learn everything I could about these hard-to-find musicians and bands. It guided me through a whole world I might otherwise have missed out on. I still love reading lists like that; I’m not anti-listicle when they’re listicles by artists. 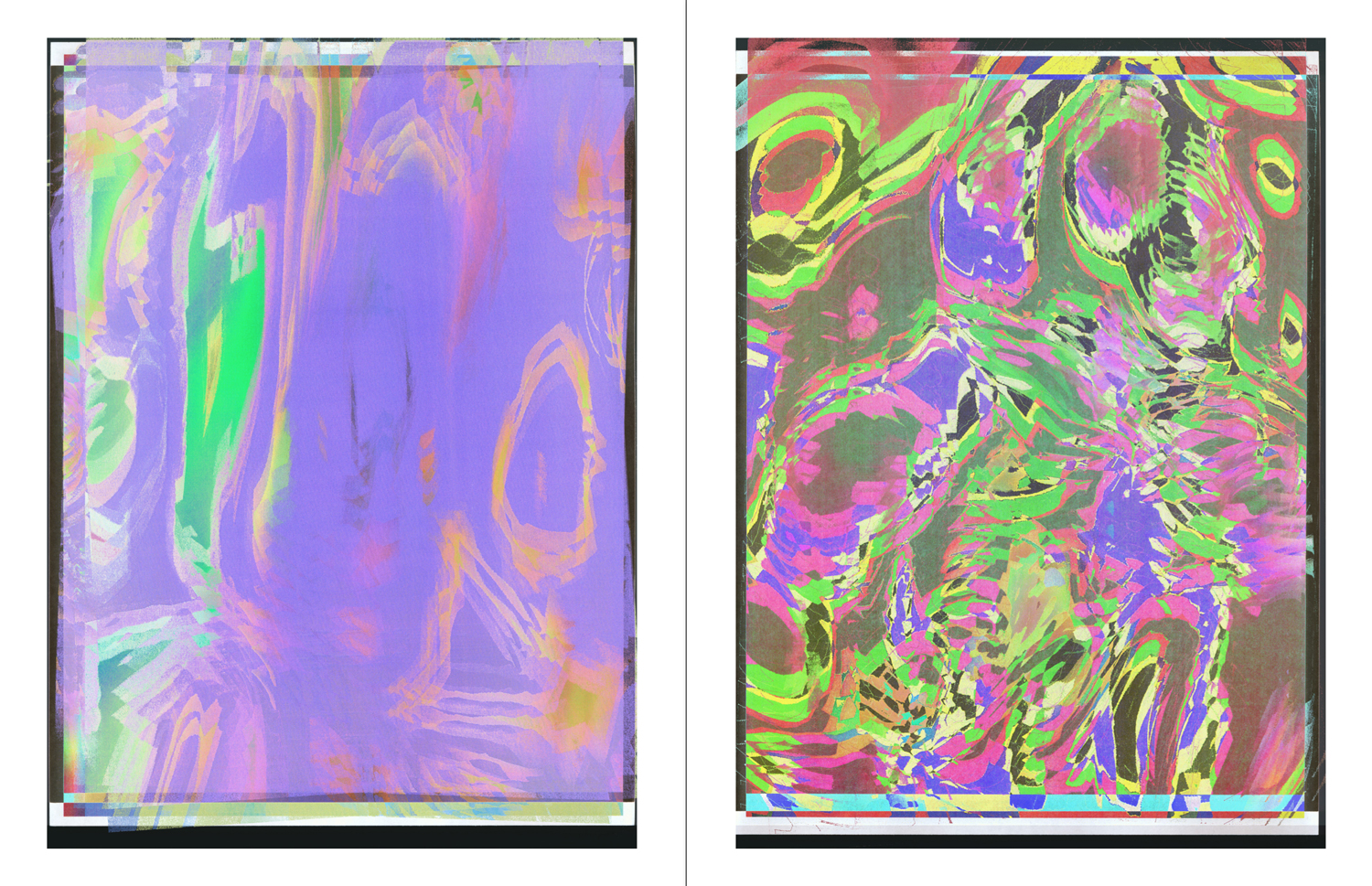 How/when did you begin working creatively with technology? Kid Pix and MS-Paint around five, SimCity 2000 Urban Renewal Kit at ten, Photoshop at twelve.

Where did you go to school? What did you study? VCU from 2004–2006 studying painting and digital printmaking. Cooper Union from 2006–2010 studying Drawing and Sculpture.

What do you do for a living or what occupations have you held previously? I’ve worked as an intern at Rhizome :) and at record stores in New York and Richmond, VA, and worked at the Genius Bar at Apple, lol. 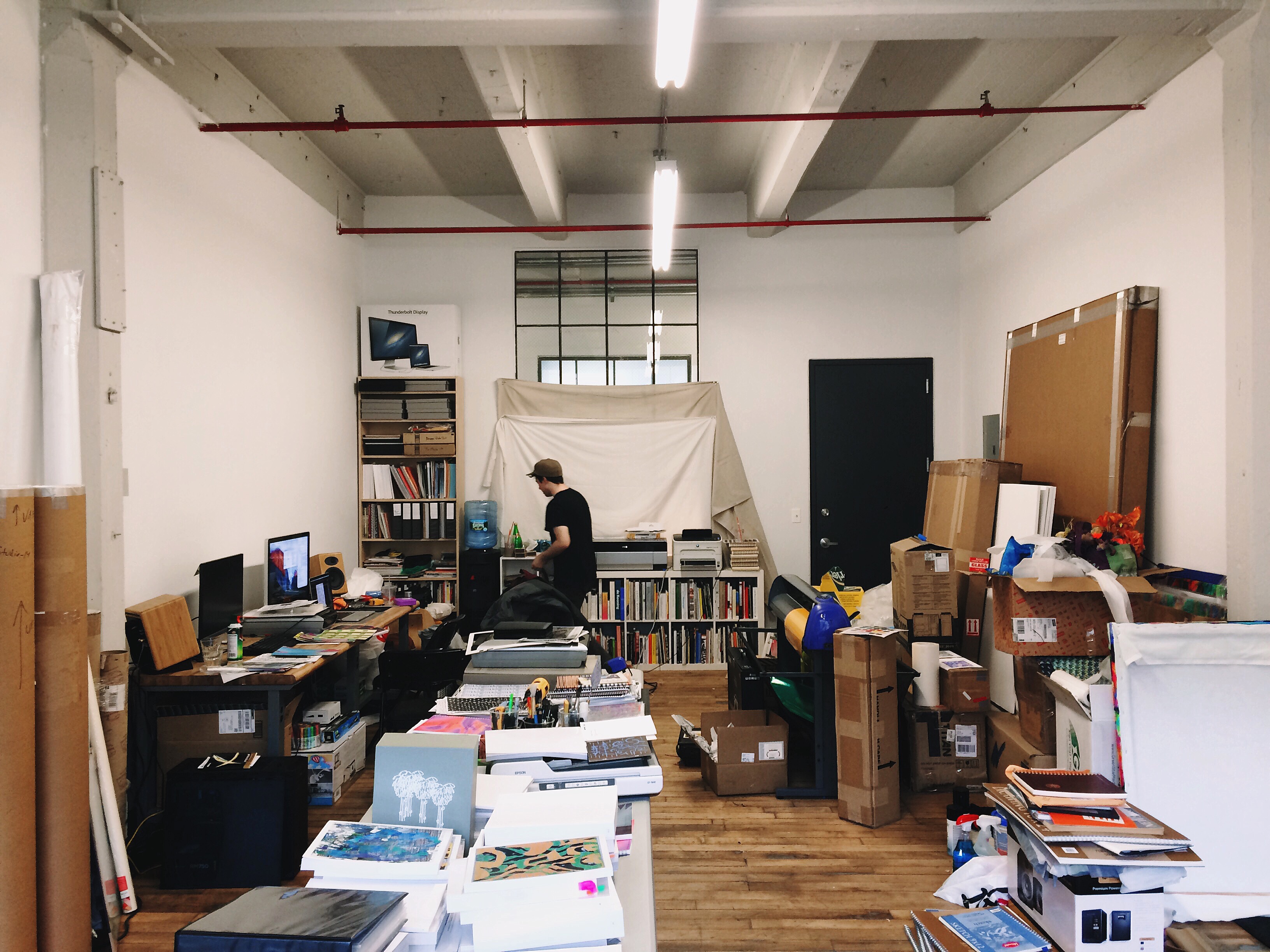