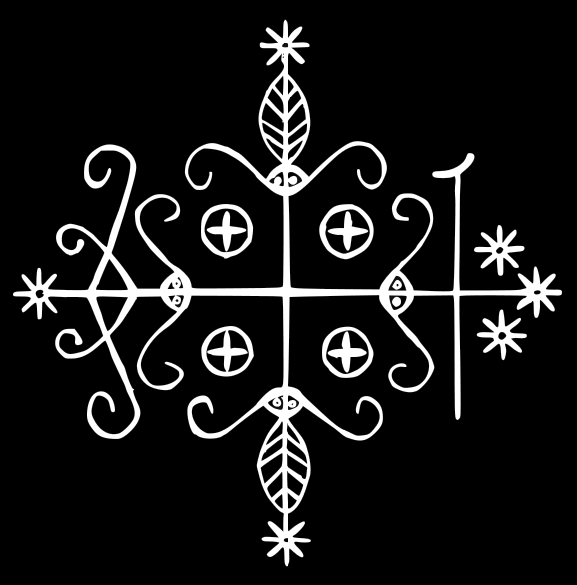 Manuel Arturo Abreu transforms the web into a platform for spiritual and bodily transcendence in a digital, live streamed adaptation of a Dominican Vudú service for Papá Legbá, the omniglot intermediary to the spirits of the Vudú pantheon. Arturo Abreu invokes Legbá by using the internet as a portal to connect with their ancestors.

This text accompanies the final work presented as part of First Look: Real Live Online, curated by Lucas G. Pinheiro and Devin Kenny and copresented by Rhizome and the New Museum.

I am interested in the intersection of noob aesthetics and syncretic Afro-Caribbean religion. This digital performance is the second public showcase of an ongoing body of research and making related to this nexus of themes. The first was a talk on palo mayombe and internet memes which I delivered at ACLA's 2015 annual meeting at the Comparative Social Media Studies seminar led by Brian Droitcour and Michael Hessel-Mial. I am grateful to them for facilitating that platform, and I am grateful to Devin Kenny and Lucas G. Pinheiro for facilitating this one. This time around, I am focusing on Dominican Vudú. 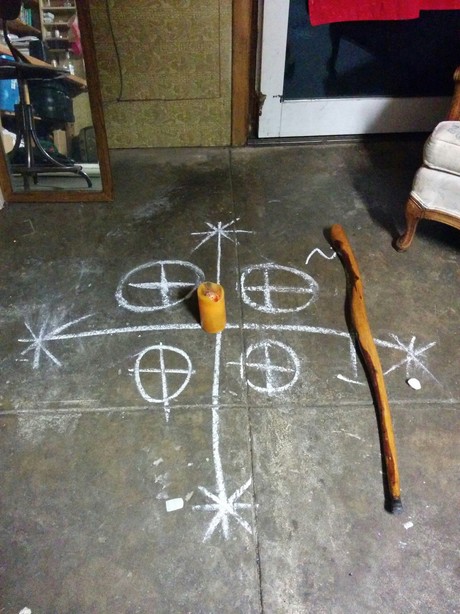 Afro-Caribbean religious communities of practice were forged by colonization: in the face of the illegality of their religions, slaves cloaked African deities in Catholic drag in order to continue worshiping their pantheons in secret. Aside from being an incredible aesthetic and political feat under incredibly oppressive conditions which continues to inspire my practice, syncretization had other ramifications. In my native Dominican Republic, for example, many who identify as Catholic incorporate worship practices from Dominican Vudú, also called Las 21 Divisiones. Due to antiblackness and the Dominican Republic's denial of its own African heritage, this regional Catholicism with folk religious influences is contrasted with "brujeria" (witchraft) such as Dominican and Haitian Vudú on the one hand, and with Protestant evangelical Christianity on the other hand, which has spread quickly in the last few decades thanks to missionaries.

I am a noob with respect to Dominican Vudú because I was raised Protestant as a Dominican immigrant in the Bronx. While evangelical services draw on practices from Dominican folk religion such as possession and glossolalia, the theology rejects what it sees as Catholic idolatry in the form of votive candles, the iconography of saints, and other objects used in folk religious practice. It further rejects all folk and Vudú religious practice as demonic work. As such, my dad speaks little of the folk Catholicism in which he was raised, except to call it blasphemy. This means that as a Dominican in Portland, OR, my main point of connection with the 21 Divisions is the internet.

The availability of this kind of information, however scarce, is novel: Afro-Caribbean religions have generally operated in secret. Although occult is defined as hidden or secret knowledge, the "World Wide Web" has become a repository of such knowledge. Like a cyber-Oracle of Delphi, the internet guides spiritual seekers to unforeseen destinies. Groups that previously kept their theologies and ritual practices secret for fear of persecution are now proudly hosting websites, spreading their beliefs and recruiting new disciples from all over the world.

Apart from being notoriously unreliable, the internet as a site for spiritual investigation presents another interesting problem: the bedrock of Afro-Caribbean religion is ancestor worship and land power. Since computers are part of nature, presumably the spiritual vitality of the earth is present within its technology. What, then, does digital animism look like? Can text, images, and video uploaded to corporate servers maintain the animistic weight of IRL ritual handed down across generations? Does binary digital code allow for some retention of any of the immaterial energy that earth objects and remains of living beings contain?

Some of the earliest examples of digital animism might be chain emails with injunctions to share lest misfortune befall the reader, such as the Katu Lata Kulu, the Hawaiian Good Luck Totem, and Carmen Winstead letters. These emails are heirs to a tradition of chain snail mail such as the "Send-a-Dime" letter, which according to Wikipedia started in Denver, CO in 1935. A more recent example, with less hexy overtones, might be the Ferguson sigil drawn by Tumblr user wildwitchchild143 and posted on August 15, 2014: 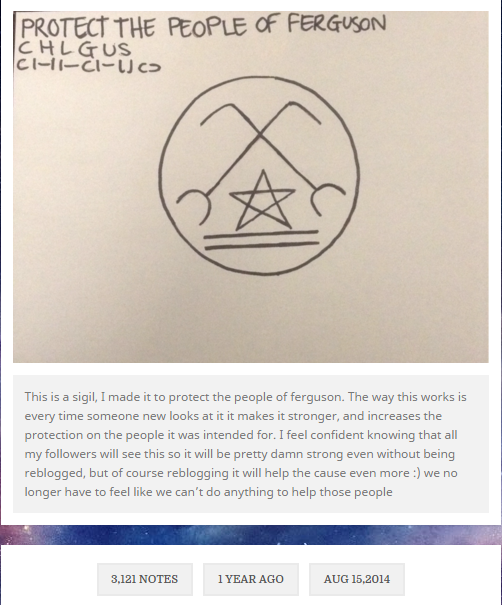 Elegguá/Legbá/San Antonio holds the keys to destiny. He has 21 paths and 21 cowries. He is chance and death personified, the symbol of transformation, and the chief of the 21 Dominican divisions of loa. Olofi, the supreme Yoruba god, said of Elegguá: "without you it will never be possible to do anything." This is why one must praise and give offerings to Legbá first in every ritual; he must be saluted before speaking with one's ancestors or other deities: Papá Legbá, who speaks all languages, is the arbiter of communication, standing guard at the crossroads of the living world and the spirit world. Whether one's spiritual journey is online or in meatspace, Legba must give his blessing and carry the message. Legba is the finder of what is lost. He is known to be a protector of children, which makes sense, since children, too, are linguistic geniuses.

Across the longue durée of the Middle Passage, the god Elegguá (Fon name: Legba) lost his priapistic virility, transforming into Papá Legba, a deity represented dually as a hobbled old man with a cane and a petulant child. Legba is syncretized in the Dominican Republic and Puerto with St. Anthony of Padua, in Cuba with the Holy Child of Atocha, and in Haiti with Saint Lazarus. He retains his omniglot abilities, a trickster nature, and role as guardian of the crossroads. 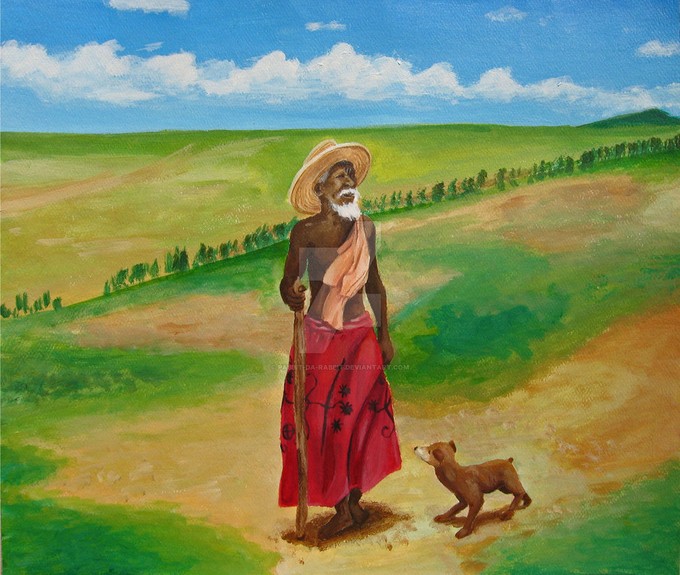 Natalia Bolívar states that in Yoruba and Yoruba-derived Afro-Caribbean religions like Santeria, Elegguá exists in an indissoluble dyad with Echú, the incarnation of the problems afflicting humanity. This pair constitutes the mythical balance of “the inevitable relation between positive and negative.” Dominican Vudú borrows the Haitian framework in which loas have many varieties of rada or "peaceful" manifestations and petro or "angry" manifestations, known as "vueltas" (literally 'turns'). In las 21 Divisiones Legbá's petro manifestation is Karfu, who corresponds to Echú and is syncretized with Lucifer, Angel of the Morning Star.

To Legbá I will offer red and black tallow candles, coffee, candy, cigars, keys, red wine, rice, a mirror, a maraca, and rum [note: the last 2 items might be omitted bc I'm broke these days lol; I have a kashaka in case I can't buy a maraca], in the hopes that he might bless my internet research and will it to be helpful in communicating with my ancestors, understanding Dominican Vudú, and defending the dead (M. NourbeSe Philip). As the discoverer of the lost, he may help repair lost lineages in my embodied context.

Servicio Digital a Papá Legbá will be live streamed on rhizome.org tonight at 9pm EST. 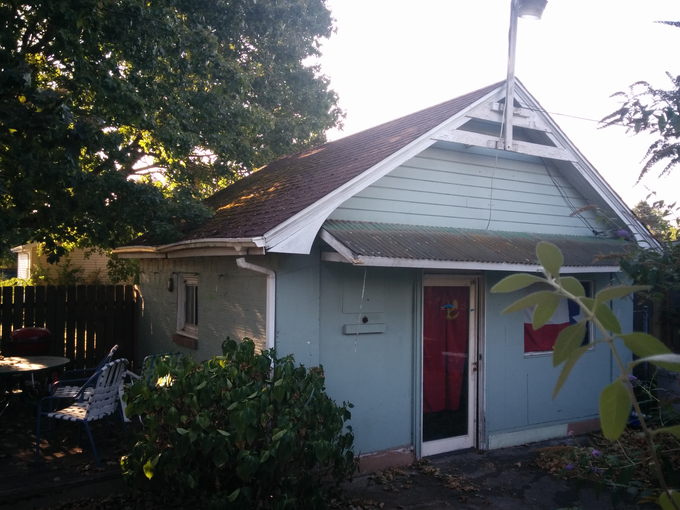 The garage in south Portland, OR where the performance will take place.