Review: A permanent installation in a VR museum
By Chris Fite-Wassilak 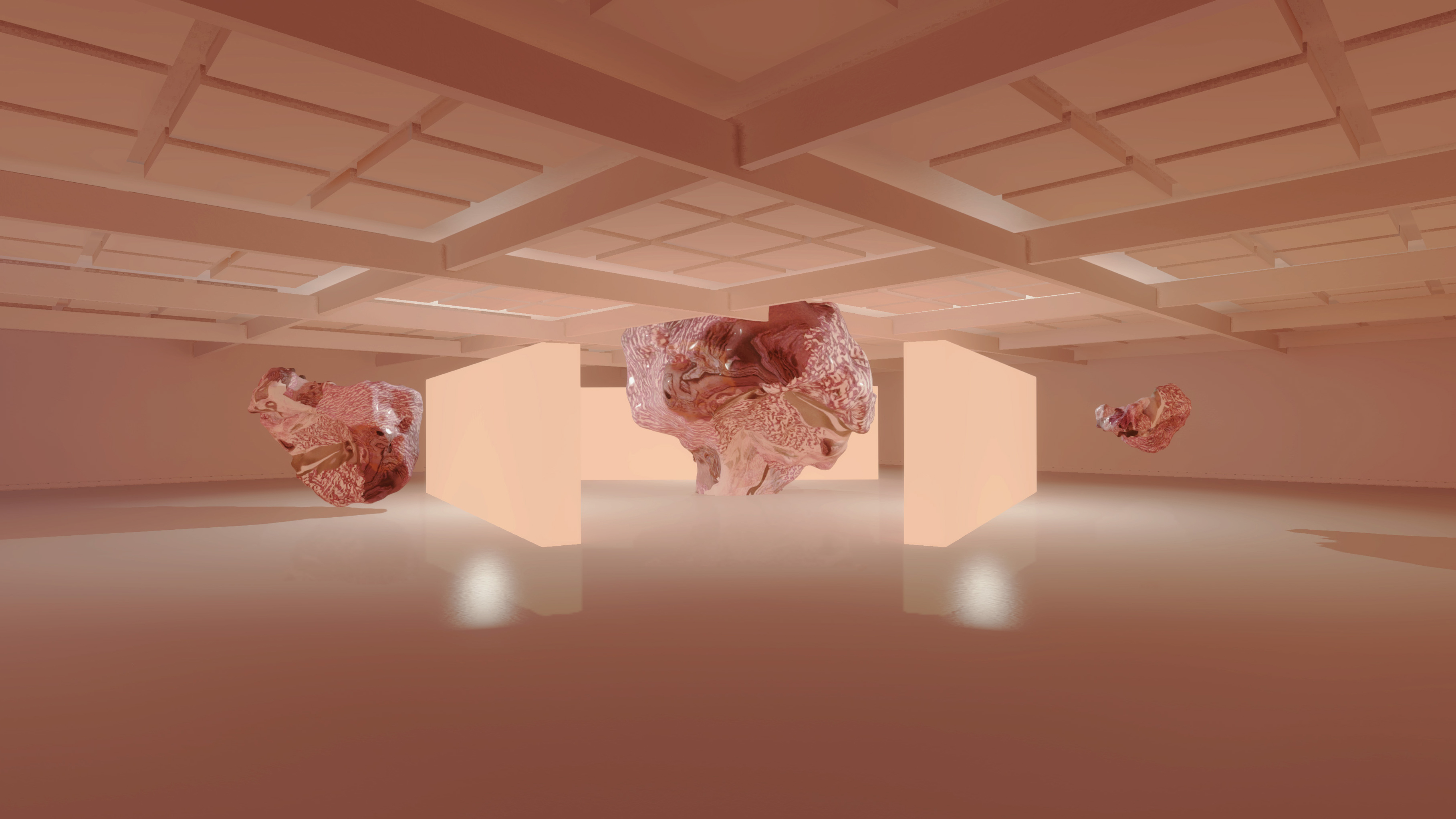 The latest in an ongoing series of reviews, edited by Orit Gat, which give critical attention to online artworks and exhibitions.

The rocks, mottled pink with swaths of darker brown, are spinning lazily around the room. One large boulder floats into me, careening off to bounce between the low floor and ceiling of the broad, cream-colored space. I spend a few minutes chasing the rocks, sending them flying around in abrupt directions. One smaller chunk seems to always be hovering at about head height, and veers off when bumped with a quicker spin that feels slightly more satisfying. They’re shiny, layered bits of stone, maybe some type of pink granite, lumpy and irregular but still highly polished, reflecting the gallery lights off their surface. Penned in at the center of the room by a triangular arrangement of wall segments is the largest of the rocks, orbiting slowly. As it turns, its lower third passes right through the floor. This mass isn’t moved so easily; instead it kind of carries you with it. I position myself, as much as is possible, on the gyrating stone and soon I’m juddering up and down, occasionally bumping into the ceiling, or at times given an odd fragmented view, seeing only jagged portions of the rock as it apparently passes through me. 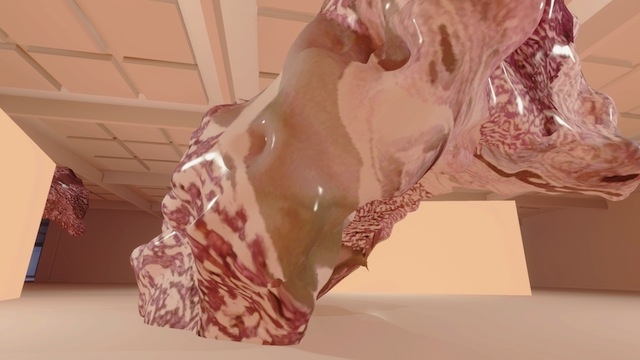 The title of Australian artist Rachael Archibald’s digital installation Carnate (in-pinking) (2015) suggests a body—flesh that has not yet been formed through the process implied by the word "incarnate." This is perhaps appropriate given that I am fumbling my way around a virtual reality gallery, noodling between my mouse and arrow keys, trying to avoid staring askew at the ceiling and walking sideways into the walls. The thing that seems to be embodied is more of a part entity, a displaced narrator; not quite a first-person immersion, not quite an avatar, but just enough that any time I think and write about this I have to suppress the urge to encase everything in scare quotes: "I" "stand" "on" the "rock"; "I" "bump" into the "wall." In some ways, I could say that bopping about in Archibald’s helium-filled geology installation is more intertwined with the work itself than, say, watching film documentation of Warhol’s 1966 pillow-shaped Silver Clouds, which is the only way I’ve ever encountered that piece. But then it also feels slightly unfair to say that it wasn’t as much fun as working my way through the childish wish-fulfillment of a room filled with white balloons for Martin Creed’s Work No. 200: Half the air in a given space (1998), or indeed any premium playground ball pool. Each of those instances has their own varying relay between physical interaction and imaginative interaction; the peculiar kind of satisfaction found "here" in Archibald’s installation is less about the fact that I can "touch" the art and watch it whizz round the room than the glazed distance felt from my own activity. What Carnate does give us, though, is a fairly light meditation on presence, weight, and the attendant contradictions of a digital sculpture.

A long, necessary, aside on place: Archibald’s installation is housed in one section of an expansive flat-ceilinged building, with the square columns and high windows of a former industrial space. There is track lighting lining the skirting boards of the walls and large theatrical spotlights hang from the rafters. The floors are white and glossy. In the central lobby where you enter the building is a square light well above a corresponding water feature, with a white, angular abstract bust floating mid-air. Archibald’s is the fourth and most recent addition to Paper-Thin, a platform (they refrain from using the word "gallery") for permanently housing online artworks within an all-too-familiar contemporary art structure. Visitors are plonked down in the lobby and left to explore the space, where each artist’s project is housed in its own cavernous room. Paper-Thin runs on Unity, a gaming platform that provided the basis, if you remember, for 2008's Off-Road Velociraptor Safari, or, more recently, Angry Birds 2. We roam around in first-person mode, a set of floating eyes. I can’t help but think of playing Myst or 7th Guest (both from 1993, and probably a handy indicator of my age), where you’re deposited as a clueless, amnesiac protagonist in a strange unfamiliar world—but this time I’m cast in yet another art gallery partially filled with a few big artworks. It’s sort of as if they’d done a version of Wolfenstein 3D (1992) set in Basel’s Schaulager (a private museum conceived of as a "viewing warehouse" where works from the collection are permanently installed in their own rooms).

While creating a long-term home for new digital works by younger artists seems like a timely, even necessary gesture, there’s something about the way the rocks cast their shadows on the shiny floor, and the way the columns reflect off the gently rippling water. If you have a look around, strafing from one gallery to the next, all the projects so far are of a similar ilk: representations of sculptural installations which rely on the appearance of textured surfaces to create their effect. So far, Paper Thin’s version of digital art to be preserved is a mimetic pun on the physical world. What this glossy pun suggests, firstly, is that we want to feel comfortable in our virtual realms. But more insistently, it also reasserts the importance of the visual and the hierarchy of perspective in a realm where such attributes are simply arbitrary. As it is, the works strum pleasantly enough on the irony of making ornately un-physical works for a showily un-physical space; hopefully, the site’s future collaborators will push at and mine its all-too-literal boundaries, and leave us with more than that sense of scare quote detachment.