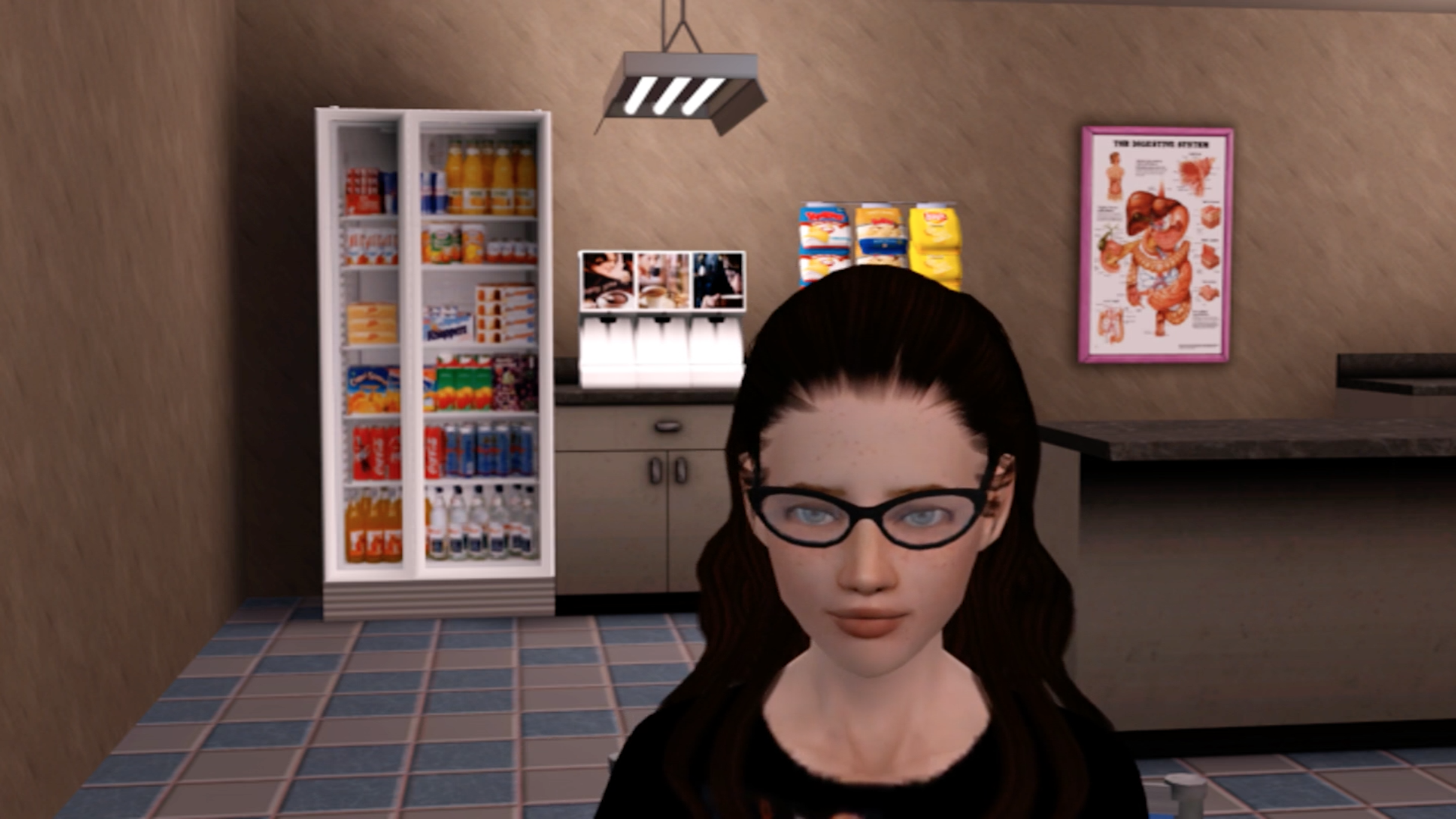 Emma Hazen: You’re working on Hudson Valley Ruins (2016), your forthcoming machinima film produced in the life simulation game, The Sims. What prompted you to start using The Sims as a tool to make your work?

Jacky Connolly: I started using The Sims out of a desire to work in 3D before I had learned any modeling. After a decade-long hiatus from the game, I had a serendipitous experience as I unearthed a forgotten toolkit of customizable assets and building tools.

I played the first iteration of The Sims obsessively between 2000-2003, aged ten to thirteen. The Sims was my window onto an inaccessible realm, a fantasy theater for enacting my imagined late teen years and early adulthood–a world without school where you could drive, sleep at a man’s house, or try out his heart-shaped hot tub. I would frequently role play as older women that I wanted to emulate, an amalgamation of various movie and book characters and cool teens that I would see at high school. I envisioned adulthood as a world of intrigue and possibility, a release from the ensnarement of a middle school nightmare. Real life could only disappoint these optimistic projections.

I am no longer enacting an imagined future, but reenacting the traumas of earlier life stages. In my scenes, the nightmares of childhood and the traumas of adolescence serve as an anteroom to hell. Anxious and foreboding nights spent in a suburban bedroom have shifted from being the context in which I was playing (as a preteen) to the subject of my film scenes. As an adult, I can now use this world for my own private film production. This is how the intrigue and possibility of the game lives on, in the sandbox world's potential for mastery through reenactment.

EH: We spoke about The Sims 1’s oppressively tedious structure—without cheats your Sims age, commute to work every single day, and have to perform routine tasks such as sleeping, eating, and cleaning. You are working in The Sims 3, where there is more freedom to input your own designs and reconfigure the game so that the season is permanently autumn or that your Sims don’t have to go to school or use the bathroom during a take. Even though The Sims 3 offers more flexibility, the enclosed suburban environment of the game seems to be central to your work. I was wondering if you could discuss how the environmental and structural limitations of The Sims are important for you, as opposed to the reality of an open virtual world such as Second Life?

JC: The game franchise demands that its participants to simulate the "rat race," earning Simoleons, remodeling their homes, and buying properties. More expensive items improve the Sims’ moods. There are hardly enough hours in the day for Sims to do anything in a leisurely way; they are perpetually struggling and dissatisfied. The intended game-play is worlds away from the utopic playground of Second Life. The Sims is closed off and hermetic, the player is a master of puppets in a virtual world local to their desktop. Sims neighborhoods are not uncanny landscapes with impossible architecture. Rooms have four walls and houses are built on a foundation, the setting is plastic and suburban. The familiar, imprisoning domestic interiors of this game engine are pertinent to the quiet terrors and awkward social encounters of my suburban-horror film scenes.

The Sims 3 allows for cheat codes that override most of the game's built-in nuisances. One thing that cannot be "cheated" is the time of day. If I am shooting a scene during the golden hour and the sun goes down, I have to wait for another game day to pass to continue filming. I enjoy this constraint, as it heightens my own temporal disorientation. I spend thousands of hours sitting at my desktop, virtual hours melting into real hours of my life passing by.

EH: The Sims is designed to include instances of unreality within its stereotypical suburban narrative; A genie can be summoned by cleaning the antique lamp and the Grim Reaper appears to take Sims on the edge of death. Your films seem to relate to this, interspersing the mundane with macabre and fantasy. In Hudson Valley Ruins, some of the architecture is based on abandoned resorts in the Hudson Valley Borscht Belt. You also mentioned, towards the end of the film, that he characters access another reality connected to your earlier vignettes from Basement Puzzles/Rune Rooms (2014) through a portal. I am interested in how you work with real historical and geographical elements and instances of the surreal, absurd, or supernatural, and how these different realms intersect within the world of The Sims.

JC: In the original version of The Sims, the supernatural and macabre elements were an afterthought, only introduced in later expansion packs for the game. The Sims: Makin’ Magic introduced a hole-in-the-ground portal to Magic Town, an autumnal neighborhood with circus folk, witches, faeries and magicians. Basement Puzzles/Rune Rooms and the Fawn’s Leap, NY videos definitely connect to this afterthought, the intrusion or re-insertion of fantasy and the supernatural into a more coherent environment. I am interested in portals in the psychoanalytic sense, moving to "another scene" or a virtual theater where fantasies are played out.

The main reason I use the third Sims iteration is the way that the landscape is rendered in this release. The toxic purple sunsets, rhythmically swaying branches and falling orange leaves introduce a more haunting, evanescent ambiance. Hudson Valley Ruins’ title is taken from a website of the same name, a catalog of the region’s forgotten architectural landmarks. I am drawn to the past lives of the Hudson Valley and its ruined remnants, which are now being demolished one by one. Instead of ruined buildings, this film contains ruined people who seek refuge in imaginary/disappearing places.

EH: Without dialog between characters, sounds, such as the wind, pizza dough crackling in an oven or a toy choo-choo train, set the tone and pace in your films. For your exhibition, Fawn’s Leap, NY with Flannery Silva, the surround sound on Hudson Valley Rock Chick (2015) and Forever Alone Calzone (2015) permeated the gallery space. Working outside of a cinematic linear plot, how do you consider sound and its connection to narration?

JC: The algorithmic weather patterns, animal noises, and wind intensity sounds are omnipresent while playing the game, and are exaggerated by the absence of Simlish voices. The repetition and variation of sound creates a sensory experience, when a storm comes the rain and thunder is overpowering. This was especially effective with the surround speakers in Fawn’s Leap, NY. So far, I am only using in-game sounds, music and Foley/sound effects included. I sometimes use cheats to control the weather while I am filming, so that a storm is brewing in climactic moments. I edit my scenes to the pace of the diegetic sound. Hudson Valley Rock Chick / Forever Alone Calzone are my most successful use of sound to date. The repetition of certain noises (the train) and the in-game guitar playing become recurrent musical themes that highlight significant moments of action.

EH: Along with your art masters, you are getting a dual degree in library science, which essentially deals with the science and methods of collecting and organizing information. When watching your vignettes Basement Puzzles/Rune Rooms (2014), there is a feeling of walking through someone's memory palace—artifacts put in unfamiliar places in order to derive new meaning as elusive or personal signifiers. Would you say there is any correlation between organizing information and the idiosyncratic logic to some scenes, such as a a grey-haired girl floating in an indoor carpeted pool or the same character inhabiting a windowless room adorned with blue velvet and Chagall paintings?

JC: Creating an elaborate collection of virtual homes and rooms, I have definitely been informed by my LIS education. For Basement Puzzles/Rune Rooms, I initially created a database diagram of rooms and the virtual objects contained therein. My dual-degrees have often connected in this way, I was learning about database models while studying Lev Manovich’s database cinema. If you envision virtual places and sites of action as a cinematic database, a film moves away from a traditional, linear narrative structure: relational databases contain a large list of items with no imposed order.

Cabinets of curiosities/memory theaters have also served as an inspiration. The basement rooms were envisioned as microcosms of the surrounding Hudson Valley, containing plants and ornaments from the surrounding landscape. These relics are enigmatic copies of real world phenomena, simple meshes and textures assembled by the game to evoke memory. The placement of apparently unrelated Sims ephemera in a room stimulates curiosity by hinting at unseen interconnections and associations.

When I was 6 or 7, I would use Kid Pix Studio to create gif mise-en-scènes. A few years later, I used American Girls Premiere, a game for creating animated stage plays using American Girl cutout dolls.

I went to Bard College at Simon’s Rock, an early college in the Berkshires of Massachusetts, where I studied Photography and Art History. I am currently finishing my MFA in Digital Art and MS in Library and Information Science at Pratt Institute.

I am studying to work in the library and information field. I have been a babysitter for the past three years, which keeps me up to date on video game trends and actively engaged in the realm of childhood. 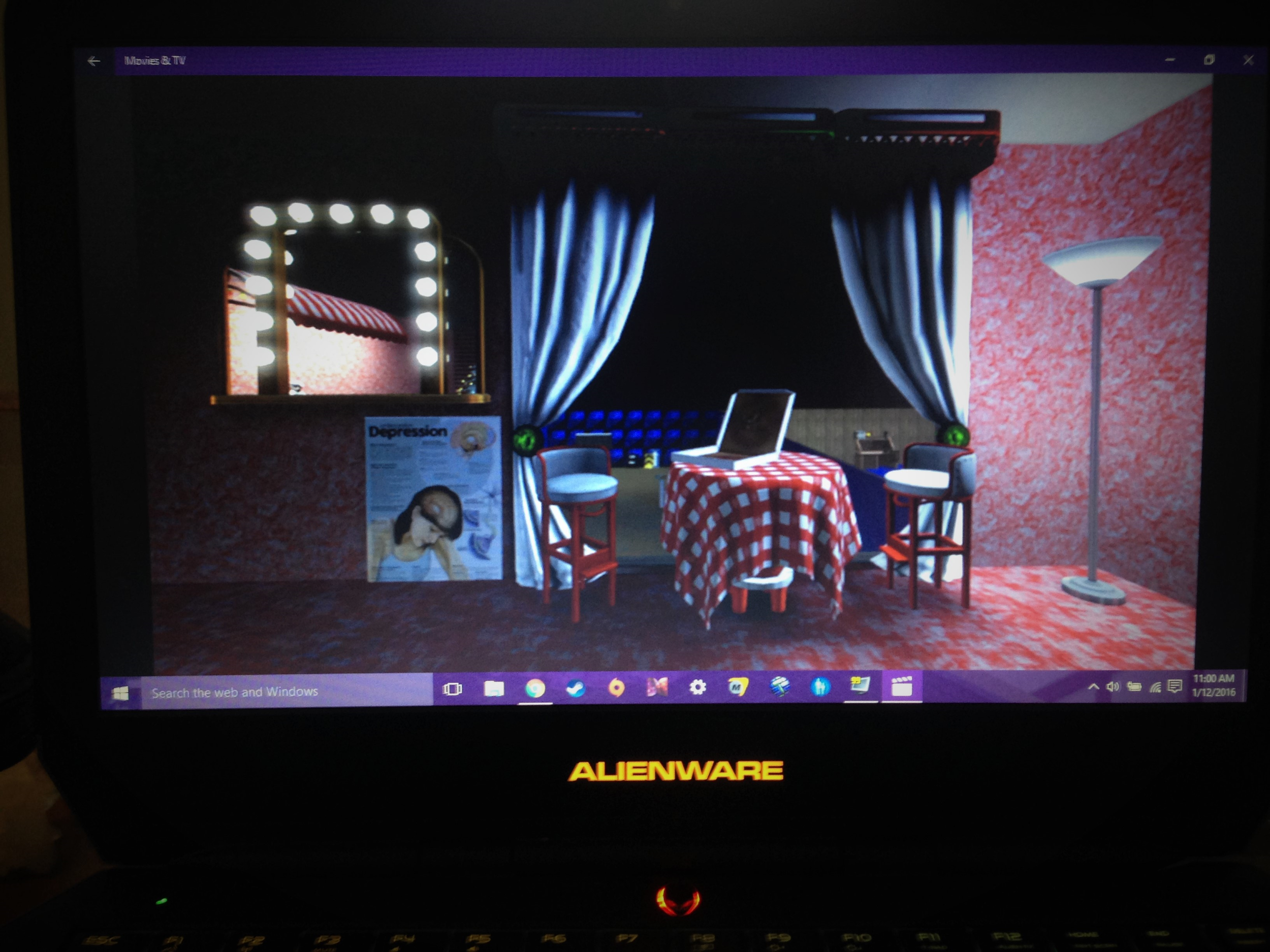