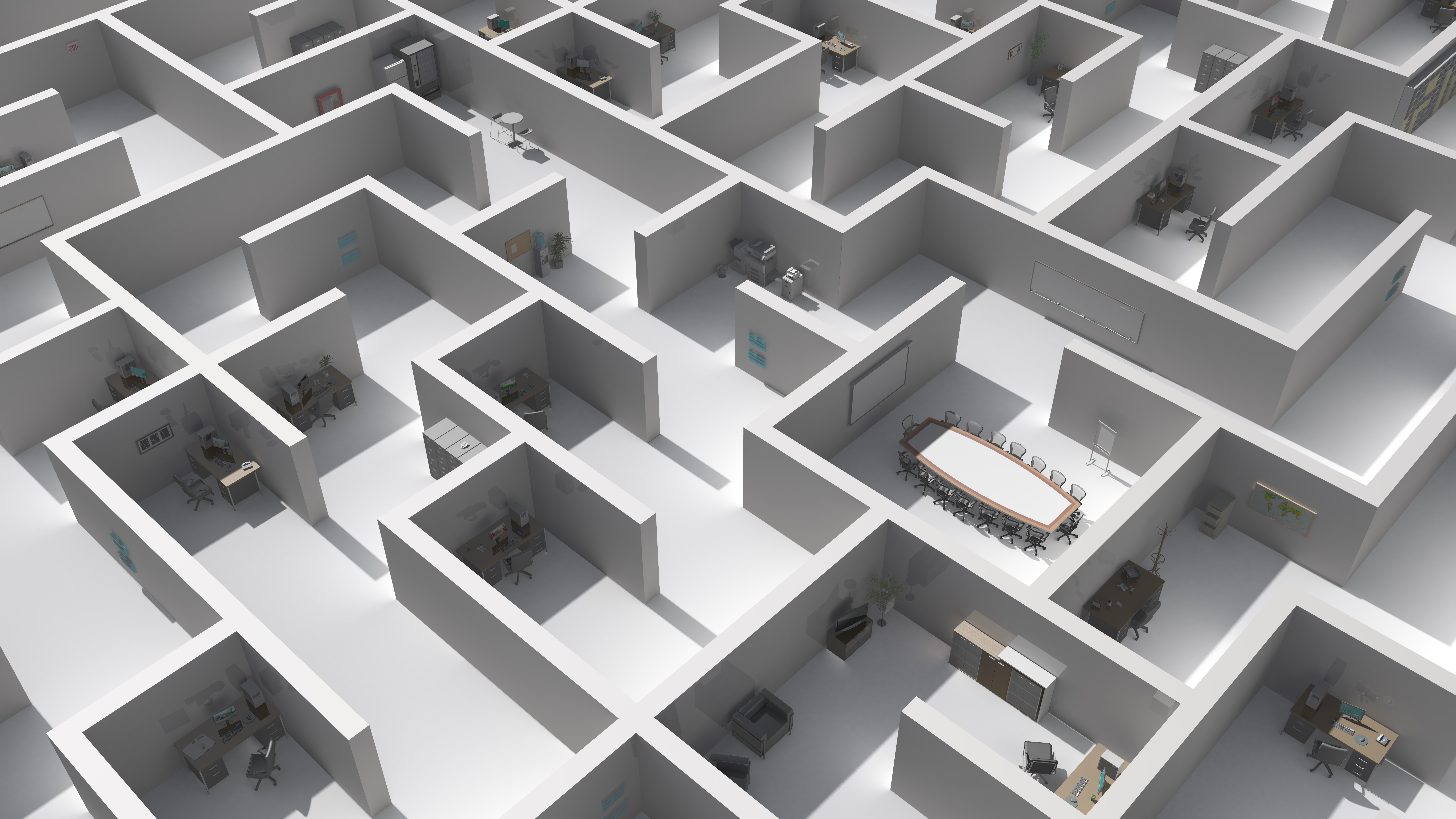 Culling its name from the 1999 satirical film directed by Mike Judge, the group show "Office Space" at Yerba Buena Center for the Arts in San Francisco focuses on the soft power and absurdity inherent in the alienating strategies and the sometimes-productive ambiguity of the modern workspace.

Entering the exhibition, the two computers in Cory Arcangel's Permanent Vacation (2007) emit across the first room the pinging of incoming and, possibly, permanently recurring "out of the office" emails that bounce back and forth from one computer to another. This room also features the paintings of Joel Holmberg, which structure their compositions according to a content management system's template designs. As these templates are often employed for the landing pages of Web 2.0 businesses, in these works, an evocative image serves to only support a company's primarily textual message. This is best demonstrated in the painting We Can't Know Precisely What we Mean Until we are Forced to Symbolize It, (2015) in which the work's title is emblazoned over a replica of the painting The Jolly Flatboatmen (1846) by George Caleb Bingham, gesturing towards the nature of the freelance laborers depicted in the painting as well as a meta-commentary of the future uses and networked existence of Holmberg's own paintings. 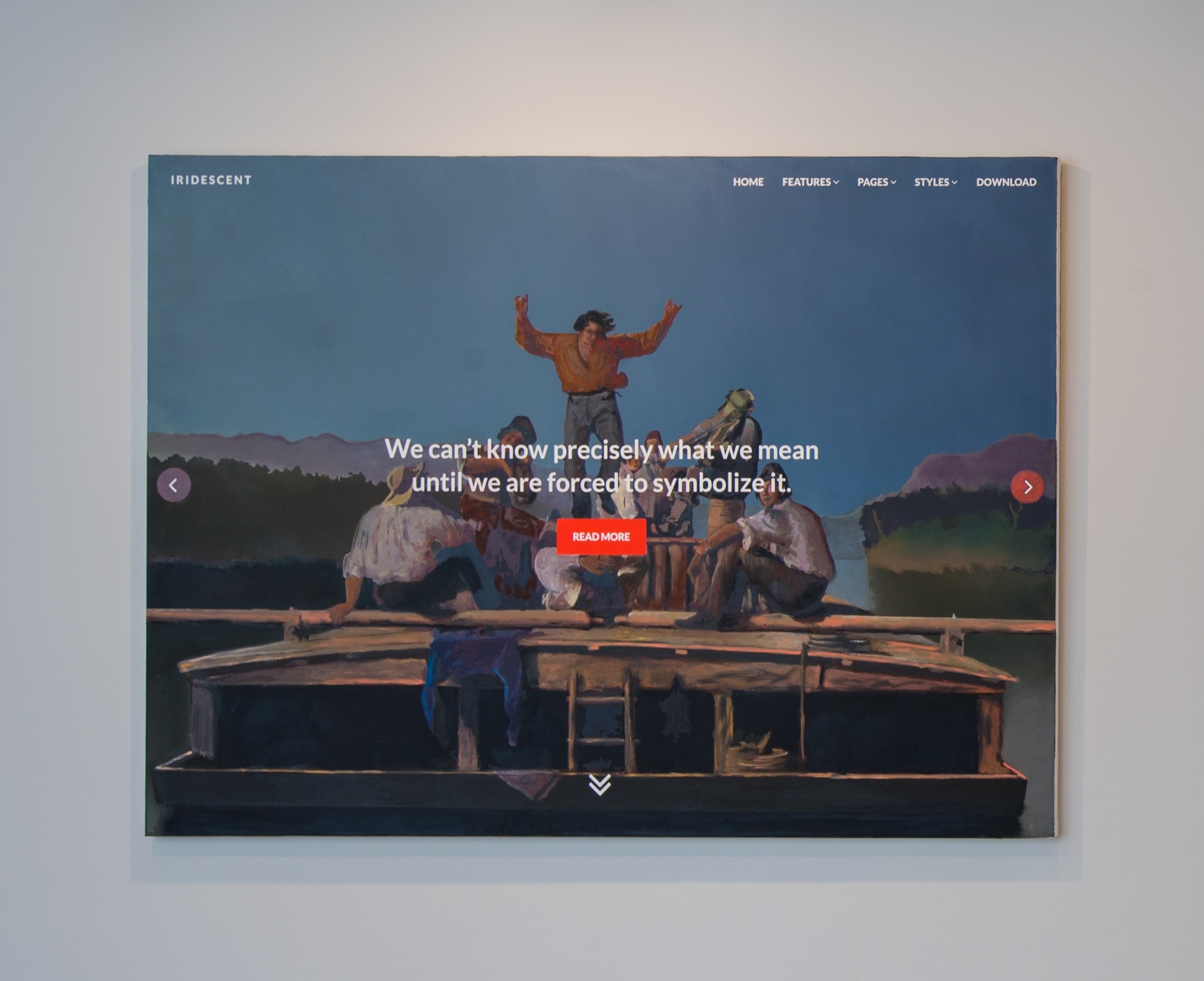 Joel Holmberg, We Can't Know Precisely What we Mean Until we are Forced to Symbolize It (2015, courtesy the artist)

A work somewhat antithetical to the routine malaise often associated with office spaces, The Mouse Mandala (2006–2015) by Joseph Delappe brings together computer mice (that the artist found in second-hand stores across Silicon Valley) in a large mandala in tribute to the weavers whose work was displaced by the first Industrial Revolution. The use of the imagery of the mandala is at once indicative of the new-age ideology that often underpins strategies for personal and organizational optimization, and at the same time appears like a pile of well-curated e-waste, until one becomes aware of the intricacy of the work’s weaving. Though mandalas are meant to be representative of the universe as centered around the dwelling place of Buddha, the work instead brings this cosmological diagram into the history of Western technological development. The use of Eastern iconography alongside second-hand technology thus becomes more reminiscent of the various invocations of tidying guru Marie Kondo who, as of late, is seemingly on everyone’s lips in Silicon Valley: specifically of the mysterious voice that told her, after a tidying-induced nervous breakdown, to look at the things that she threw away more closely.

On either side of the mandala are two paintings by Alex Dordoy, The Man in the White Suit I & II and The Man in the White Suit V &VI (both 2014), which utilize the gallery walls to make each painting appear as if they were images being scrolled through on a phone. Taken in mind with the circular mandala, the juxtaposition produces an anxiety-induced dizziness; the flattening effect of the works’ color palette furthers the banality of their depiction of generic office environments. In one piece’s boardroom with an American flag and in the other’s similar boardroom with a declining stock market graph, there is the phantom presence of the titular man in a white suit within the white walls of the space that foregrounds the absence of a distinct focal point in both works, implying a viewership that is immersed rather than contemplative, but just as easily disconnected. 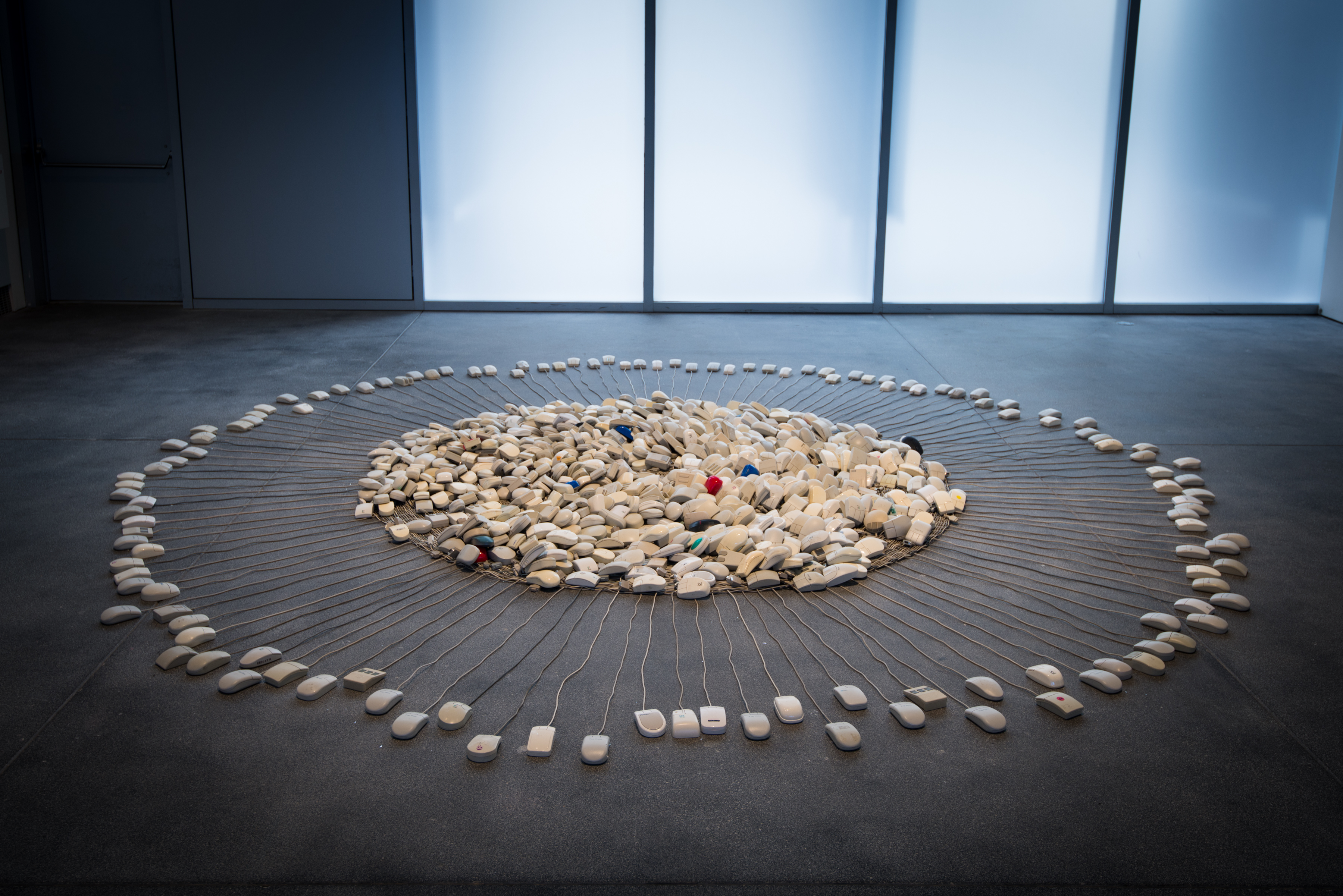 Joseph DeLappe, The Mouse Mandala (2006–15 , courtesy the artist and Yerba Buena Center for the Arts)

The inclusion of Soul and Feelings of a Worker, Whitechapel version (1978) by KP Brehmer, an artist often associated with Capitalist Realism, makes explicit the role of mood regulation in the workplace. Magnifying the graphed data from a 1932 study of the emotions of workers to an almost human scale, the two canvases that comprise the work stretch across the exhibition wall, both nailed directly onto the plaster to be held in place and painted in a way that resembles Fortran punch cards. In front of this work, Julien Prévieux's What Shall We Do Next? (Sequence #1) (2006–2011) displays a set of cartoon hands cycling through a series of patented gestures used on touch screens. The work is displayed using an overhead projector in lieu of a digital one, exemplifying the pattern by which new technologies are integrated into the work place, and often forced into the hierarchies of a preexisting bureaucracy. Comparing the former work’s enlargement and the latter’s animated cartoon depiction, both pieces work with the scalability of users and employees, and in each piece's representation, the tactics become absurd in their reduction or privatization. Considering the divorce of emotions and of gesture from their subjects, these two works are suggestive of a management based on complete hyper-individuation, on one end to track and evaluate, and on the other, to replicate. 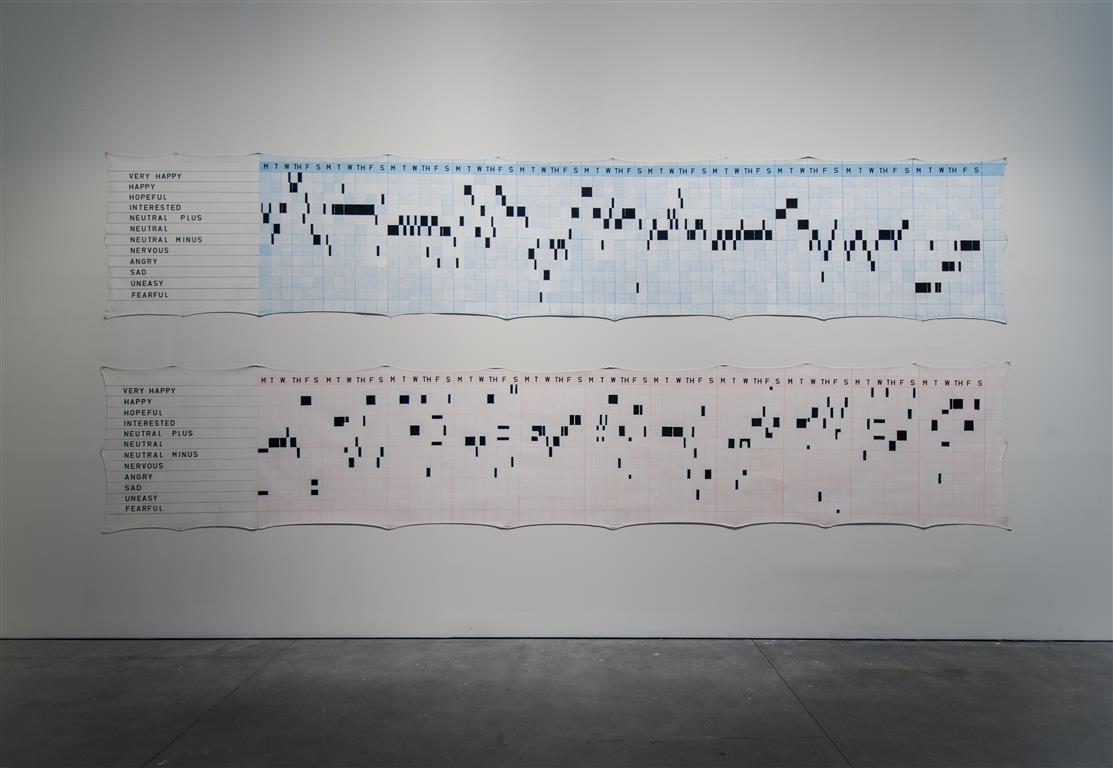 KP Brehmer, Soul and Feelings of a Worker, Whitechapel version (1978)

In Pilvi Takala’s The Trainee (2008), the artist performs a refusal of labor while working as a marketing intern for the international company Deloitte. First at a desk, then in a hall, and lastly in an elevator, Takala’s character Joanna is always at work on her thesis while gradually moving to the periphery of her environment. Though, for some, a neutral and detached subjectivity can be seen as an ideal of both cognitive labor and conceptual art, Takala/Joanna's performance of "brain work" is so far detached from her coworkers' expectations that for them it does not constitute work. What bothers her coworkers is that she is not performing her work the way they are; in one instance, this results in a staff member bringing her a laptop computer. In a way, Joanna performs both physical and cognitive labor—she performs the office habits of any other employee to an extreme while performing cognitive labor for her character’s thesis; arguably, the piece can function as a way to further market Deloitte, as many of Takala’s superiors were in favor of her performance. But because this work is not immediately identifiable or accessible by her coworkers, it becomes suspect. 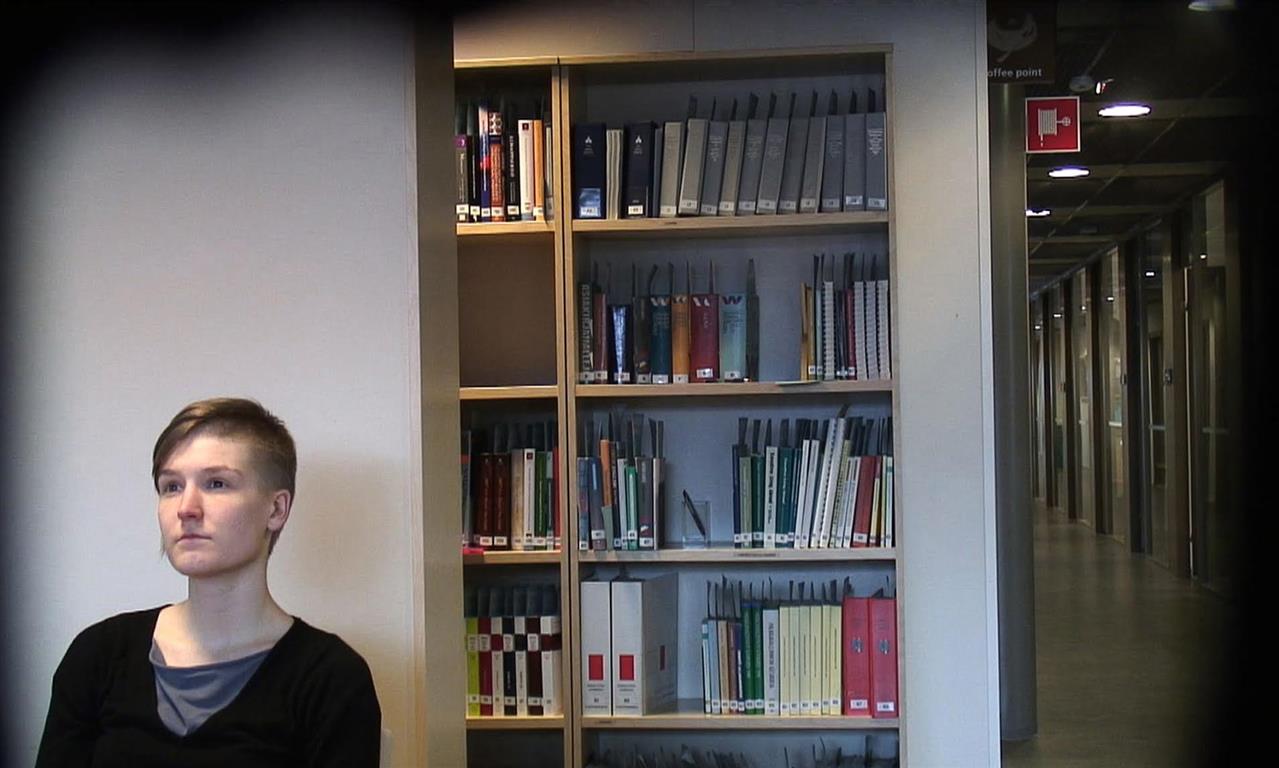 Pilvi Takala, The Trainee (2008, courtesy the artist and Carlos/Ishikawa, London)

This aspect of refusal is done to great effect in Wages for Facebook (2013) by Laurel Ptak, a remixing of Silvia Federici’s famous manifesto demanding wages for housework and Office Voodoo (2010) by Haegue Yang in their presentation of modern labor's domestic aspects. Rather than representing a collapse of the distinction between leisure and work, Office Voodoo illustrates that for many, leisure time is never spent in a leisurely manner. In the work, two drying racks attached by plastic ties are interwoven with an obsolete headset, cloth-covered powering cords for five dangling light bulbs, a security camera, iridescent CD-Rs, and a thin golden chain; navigating this piece at first felt like a chore due to the crossing wires and the intersecting grids of the drying rack. However, what remains clear in the piece is that objects for private and practical uses dangle on a dependent structural level as objects for surveillance and labor within an object reflective of one’s noncompulsory weekly routine. The title Office Voodoo makes the assemblage resemble the silhouette of an enlarged Voodoo doll, and the sculpture is indeed the framework of a figure, formed and informed by the histories and uses its viewers bring to its constituent parts. Instead of a harbinger of a Kafkaesque bureaucratic nightmare, the office space detritus appears as another part of a routine of personal maintenance. Despite its complexity, the sculpture neither exorcises nor completely represents the conditions and power structures of the modern work place, but instead presents these parts as something one reflectively and privately pinpricks.

To believe that there is an omnipresent workplace hierarchy to critique or within which to succumb often gives more credit to management strategies than they might deserve, as these strategies can have comparatively shorter life spans than pre-existing structures of affective labor. Ptak and Yang show how the soft power of the workplace is constantly inculcated by exterior power structures, as much as these power structures are—and already have been, in turn—informed by the dispersal of capital. But honestly, who is really still capable of leaving their work at work? 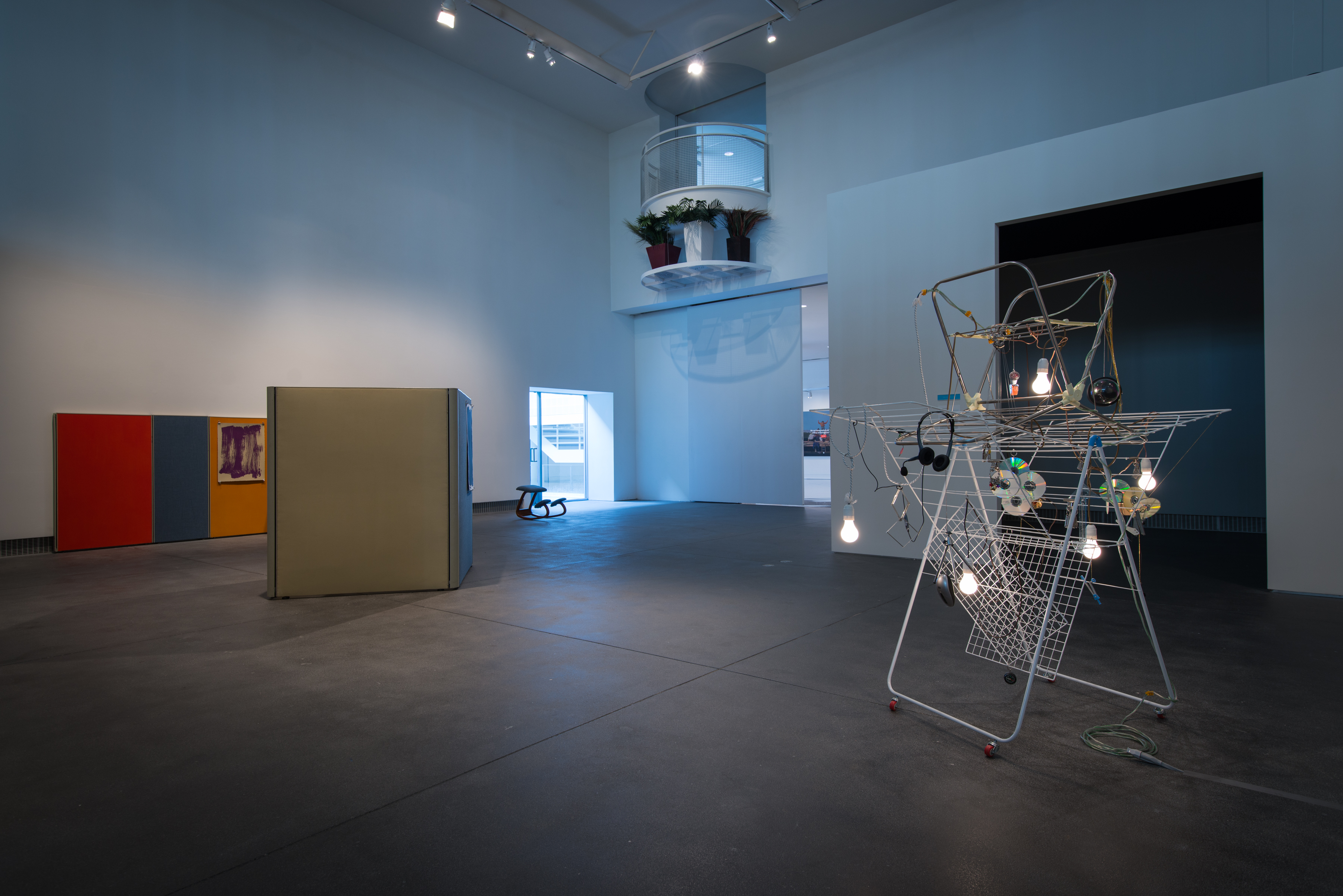