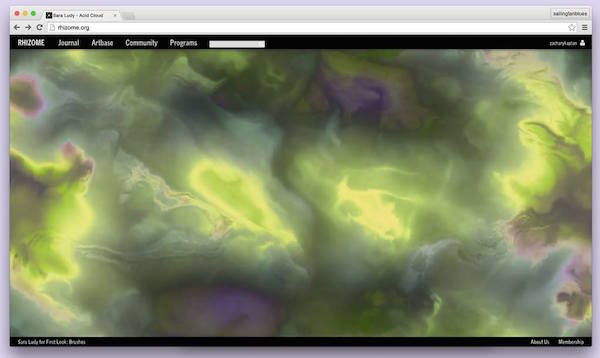 Sara Ludy's video works will be on the front page of rhizome.org all week as part of the ongoing online digital painting exhibition "Brushes," presented by Rhizome and the New Museum for the First Look series.

For this series of abstract video works, originally created for the online collaborative w-a-l-l-p-a-p-e-r-s.net, Sara Ludy begins with images created in Adobe Photoshop using the "Difference Clouds" feature, which alters color levels in an image according to cloud-like patterns. This software-generated image is then imported into Adobe Aftereffects, where Ludy adjusts preset parameters to create these swirling cloud patterns. In part, the works are an investigation of the aesthetics inherent in the software tools—but unlike artists such as Cory Arcangel, who previously explored such "default" aesthetics in his Photoshop gradient series, Ludy allows more latitude for her own improvisation, seeking out visual complexity that transcends the seemingly mundane origins of her imagery.

During the creation of the works, all of the artist's mouse movements take place outside of the image canvas, through the adjustment of various parameters. This pushes against the definition of this online exhibition, which brings together works in which the artist's physical gesture plays a defining role. Ludy's gestures are no longer interpreted by the computer as "marks" on the screen; however, such marks are never literal, one-to-one interpretations of an artist's gesture anyway. The movement of the artist's hand on an input device is always subject to a high level of interpretation and processing. Ludy's work provides an opportunity to question whether a hard-and-fast line can be drawn between digital abstractions that are made "by hand" and those generated by code, while finding in the inner workings of the computer the possibility of sublime aesthetics.

View the videos on the "Brushes" exhibition page.

For more on Ludy's work, see a review of a 2011 WALLPAPERS exhibition, Ludy's Artist Profile, and Nicolas Sassoon's discussion of her work for Computers Club.