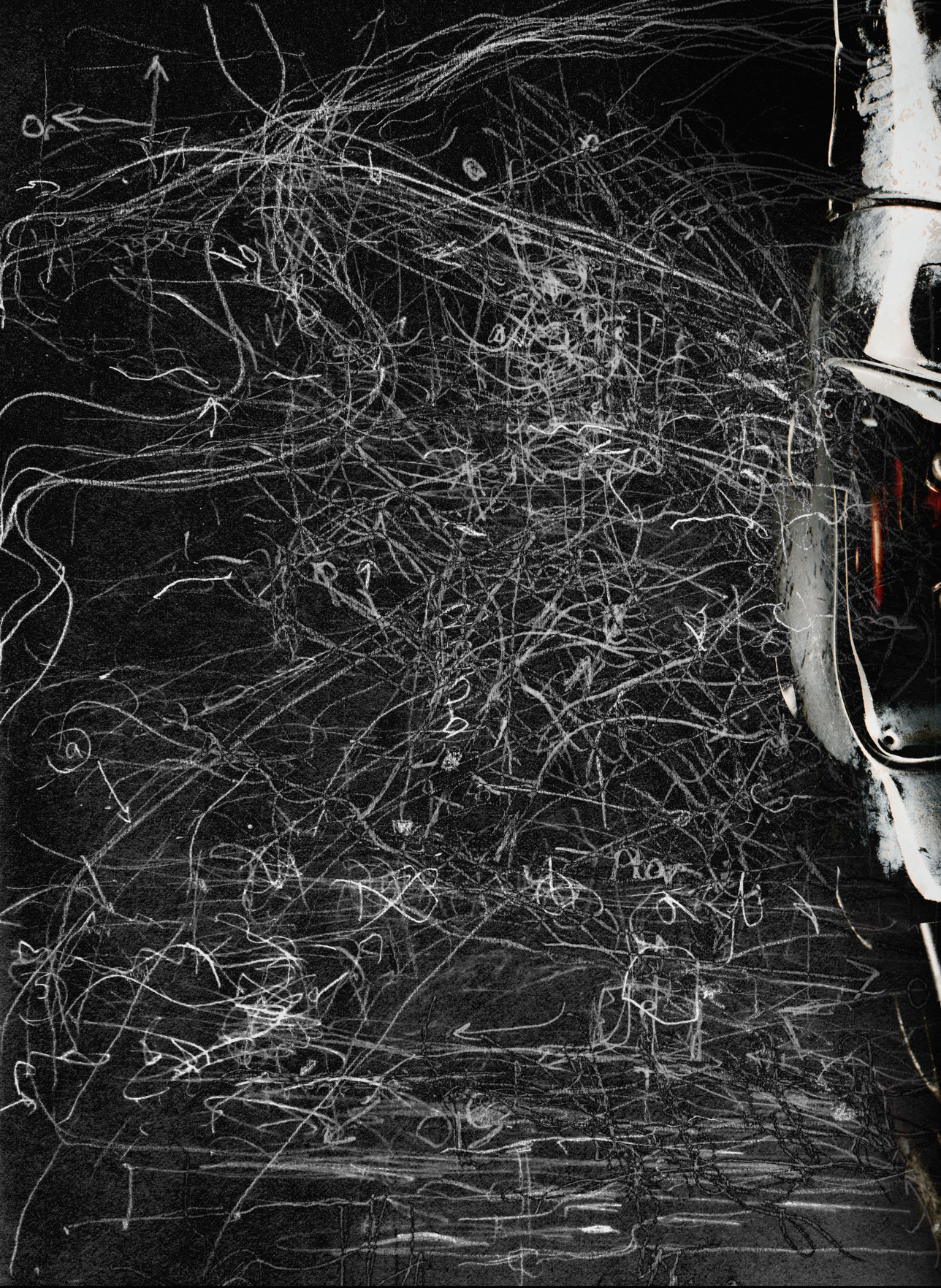 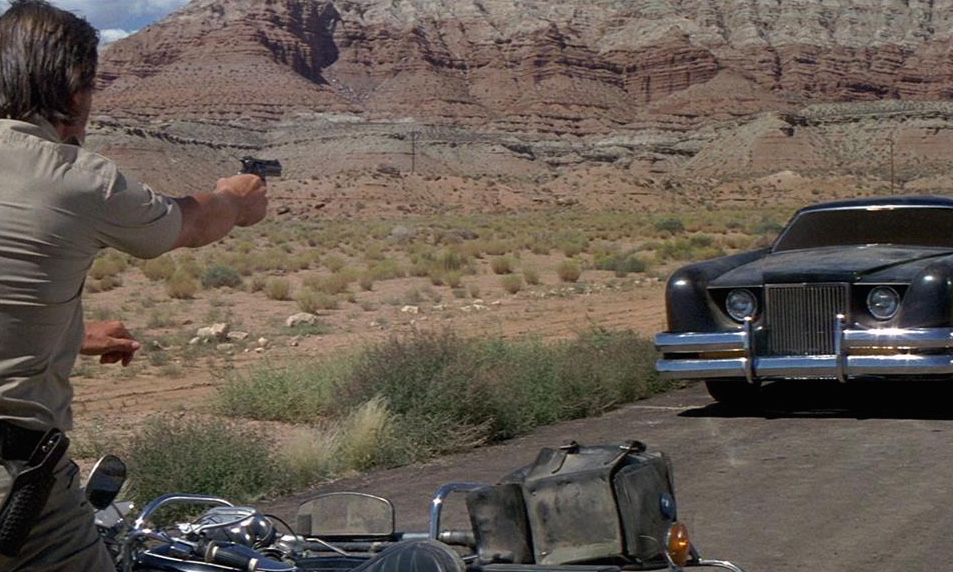 Discussions about the dangers of autonomous robots oftentimes invoke the Terminator, the iconic menace from the 1984 film, as their symbolic forebear. Reports on the dangers of autonomous cars, however, never harken back to their cinematic predecessors—the malevolent sedans, hearses, bulldozers, and 4x4s that terrorized the populace from the mid-70s to mid-80s, mowing down pedestrians, bumping off policemen, smashing into houses and demolishing motorists on the streets of suburban America. “There was no driver!” exclaims an anguished near-victim of The Car (1977), in a clip that could well have been used in an ad for Tesla. 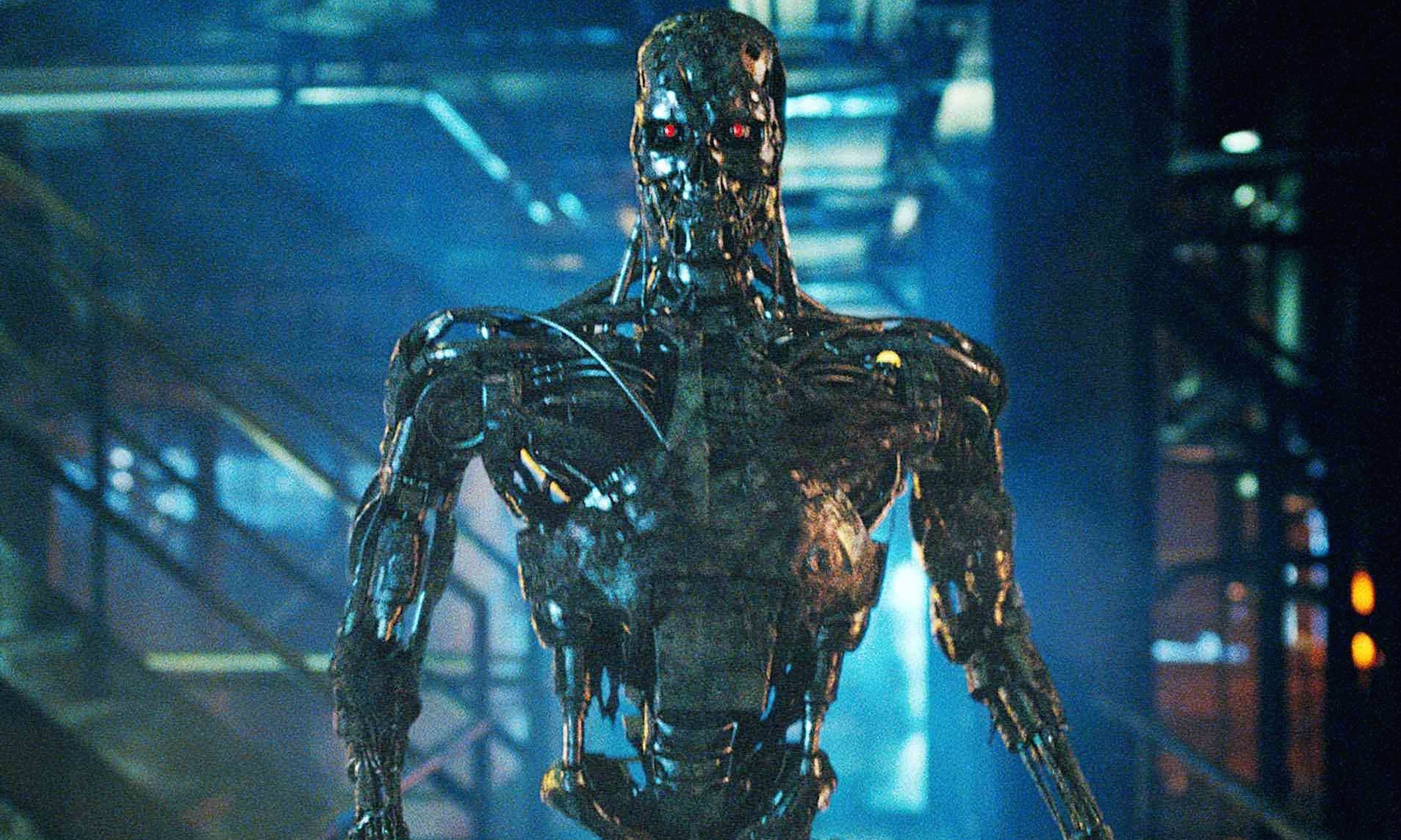 Of the sentient forms that populate our imaginaries of automation, the humanoid machine reigns supreme—that hideous progeny of the gothic that returns, again and again, to incorporate anxieties over technological change. To what do we owe its tenacity? Undoubtedly, it is due to its familiarity in form, its retention of enough similarity to humans to enable it to adequately personify, and then transmogrify, our disavowed attributes. When the encounter turns hostile, we are afforded securities that will ensure the danger does not cut too deep. When the narrative of technological triumph is transformed into one of betrayal, the narcissistic foundation remains intact. However troubled the boundaries between human and machine may be, the ground footing that guarantees the distinction is not. One can rely on the security of a terrestrial grip that will enable defiance or departure, fortification or traction. There is reassurance in knowing you can get away from the thing. 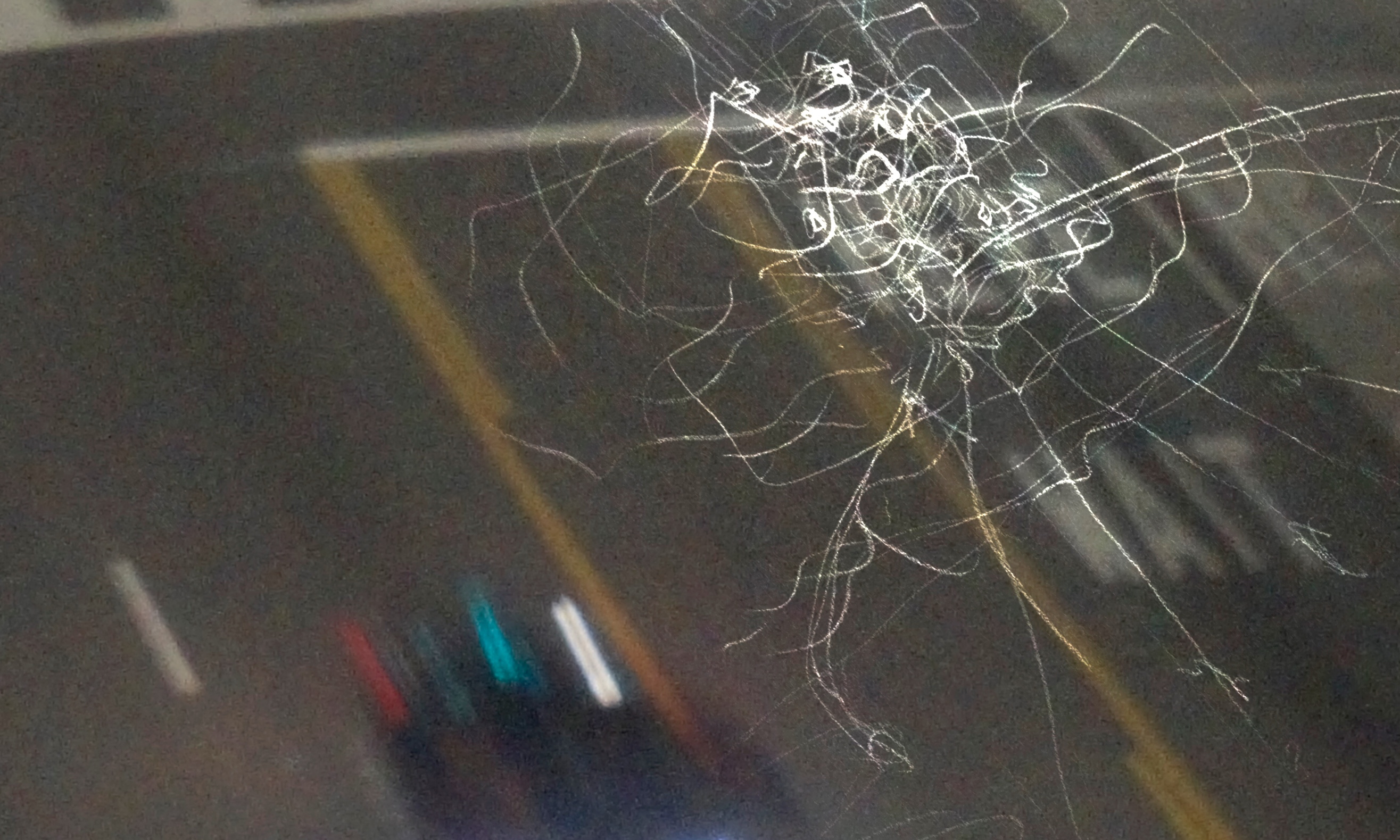 The situation is infinitely different if you are trapped inside the robot during its murderous spree. Extricating one’s body from captivity within a vehicle is a prospect that is considerably more fraught, physically and conceptually, than simply running away. The body is dislodged from the security of its ground footing and the means of self-determined movement this enables. The capabilities afforded by its physical properties are wrested out of its command, the path from cognitive intention to corporeal expression severed. The body is subsumed into a machinic composite that it cannot control and with which, from the outside, it is now coincident in form, function, and intent.

With this in mind, it is no small wonder that the autonomous vehicle has not found its place as a locus of allure and contention on a par with that of its robotic counterpart. It cannot accord us the thrill of being menaced by our own monstrous equivalent. Could one sustain the delicious agony of having to fret about the autonomous killer machines soon to be unleashed upon humanity if one were to think of them as transport vehicles in which the body must sit, rather than Terminators from which one could flee? No longer distinguishable from the machine and lacking the stability of a solid footing in relation to it, there is no structural basis for the thrill of the chase, no model of personification that secures the operations of the narrative. The exhilaration of heroic struggle is diffused when the differentiating gap that provides the basis for conflict gives way to a debilitating overlap. 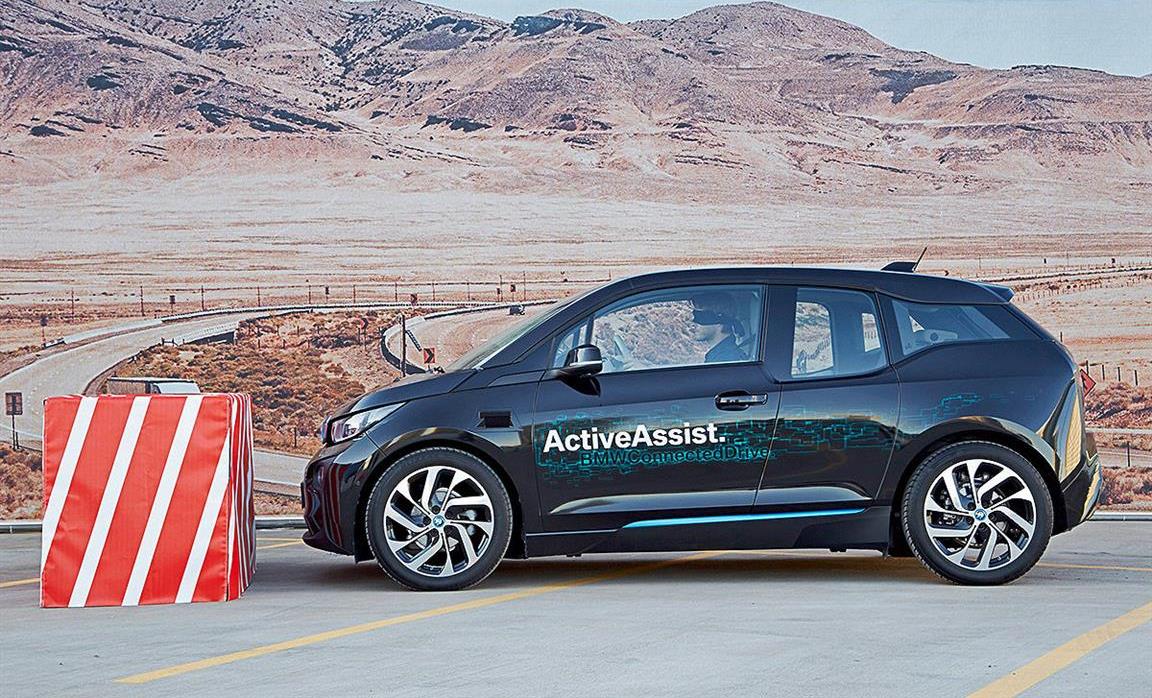 Upon entering the cabin of the everyday transport vehicle, we are integrated into a robotic construct without a discrete form. Perched atop the seat platform and lodged behind the control console, we extend ourselves into cognitive environments that inform and assist thinking, and transport infrastructures that provide sensory and operational aid. Distinctions among body, machine, and environment stretch and contract as a sheath of interfaces and cabin moldings keeps us intact–secured against the maddening intricacy of the machine on which we sit and the chaos of the outer world through which we move. Awash with the throes of travel, the vehicle functions less as an object than as an extension of our own agency. 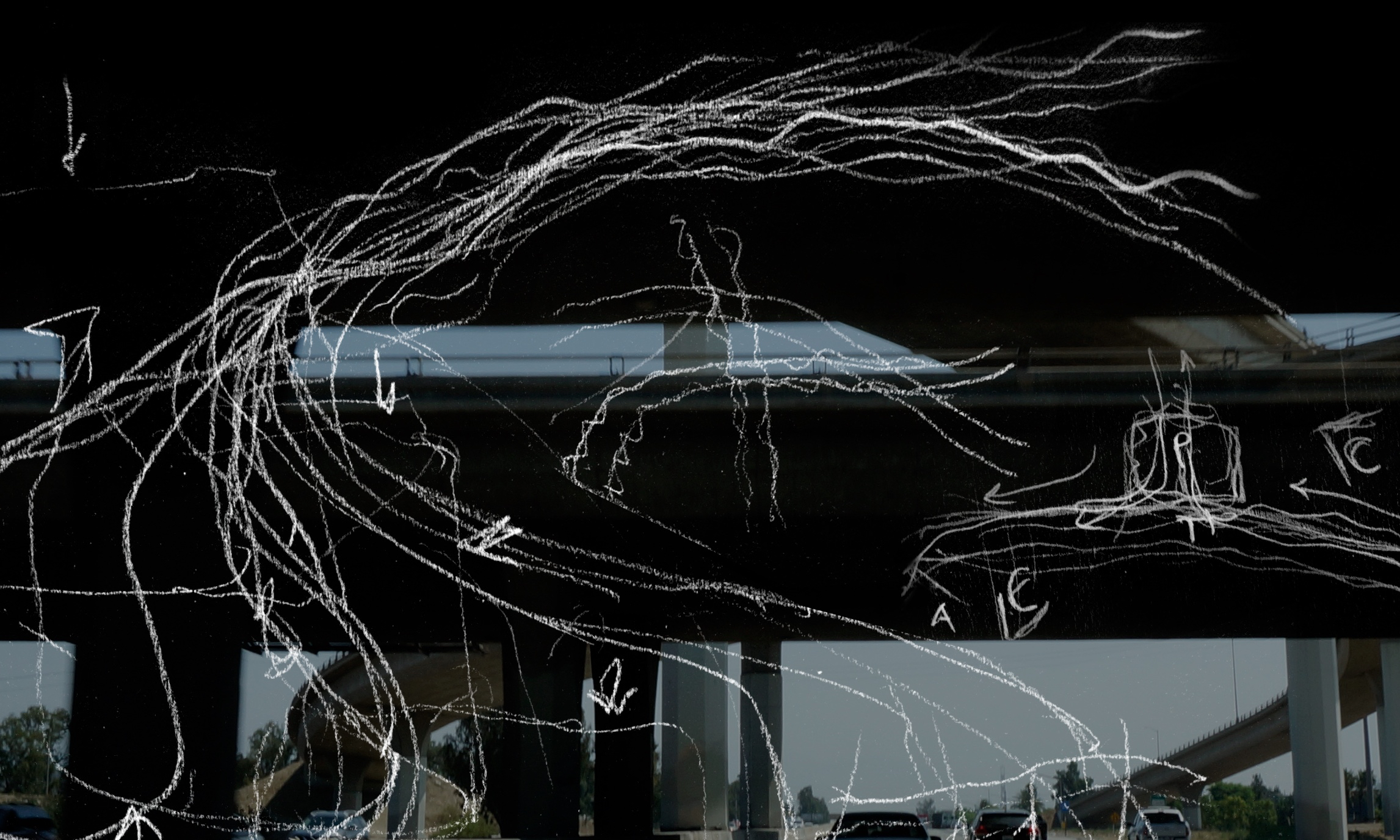 Battling one’s humanoid counterpart may shore up a self, but combating one’s own transit platform abolishes the capability one seeks to advance. To take the vehicle is to partake of the means it provides. In place of defensive positions, we facilitate joint maneuvers—coordinating densities among overlapping corridors, negotiating the rhythms and parameters of operation along courses and within lanes. Adjustments are required at the registers of speed and rhythm, cognition and bearing, from the corporeal scale of the individual to that of the driver-vehicle coupling; from the scale of driver-vehicle composites on this road to that of the larger social aggregates of the city; from that of local confederates strewn about the lane to the larger transport infrastructures enabling pathways through the urban realm. 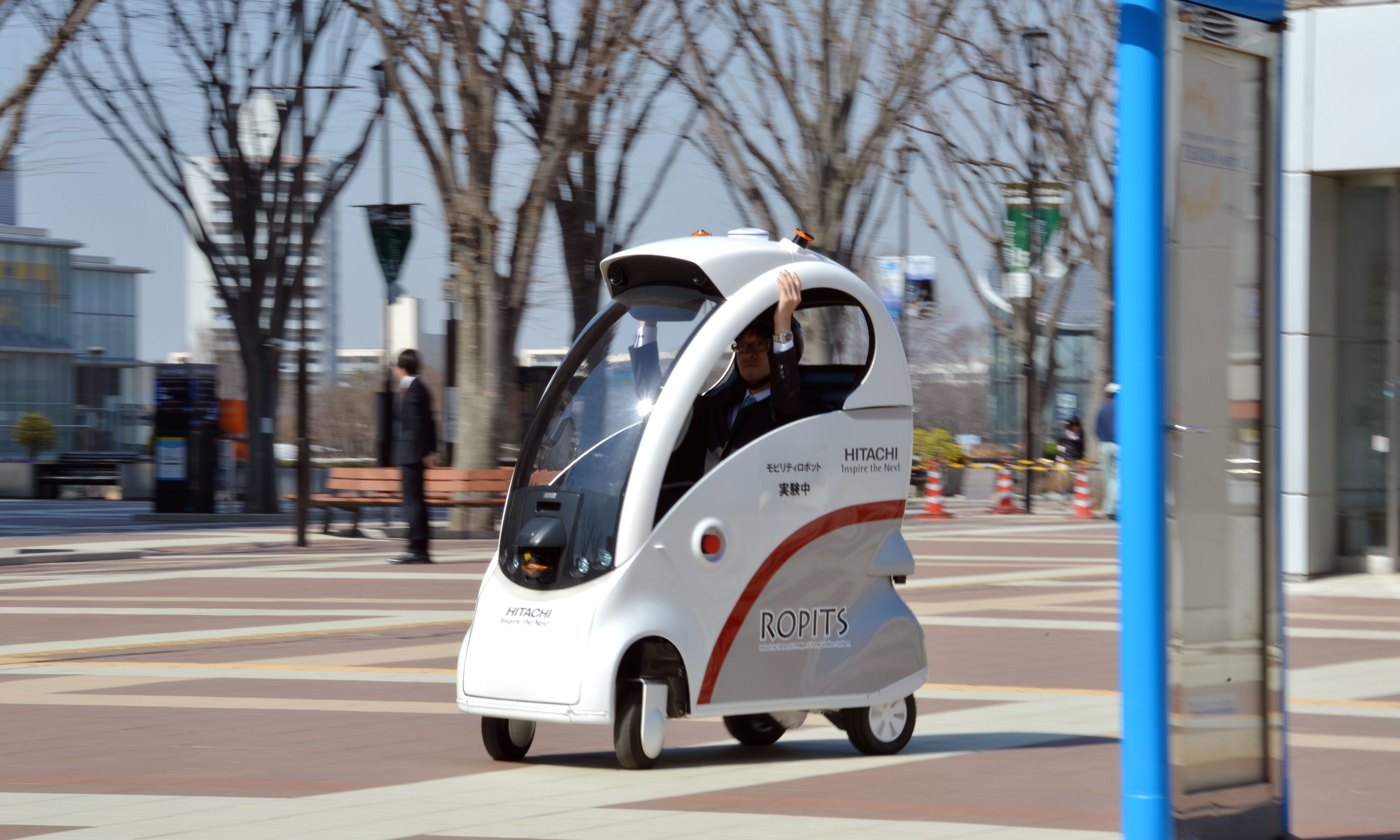 Considering the relevance of these active materialities to emerging concepts of robotic life, might the vehicle—broadly understood—offer a better structural model than its humanoid counterpart? It integrates sensing, processing, and actuation functions into the fabric of conveyance operations, situating the robotic as inherent in the materiality of form.

Rather than contending with illusive, inherently narcissistic and hostile objects—enlivened, personified machines with which we are at odds—we are prompted to get inside. 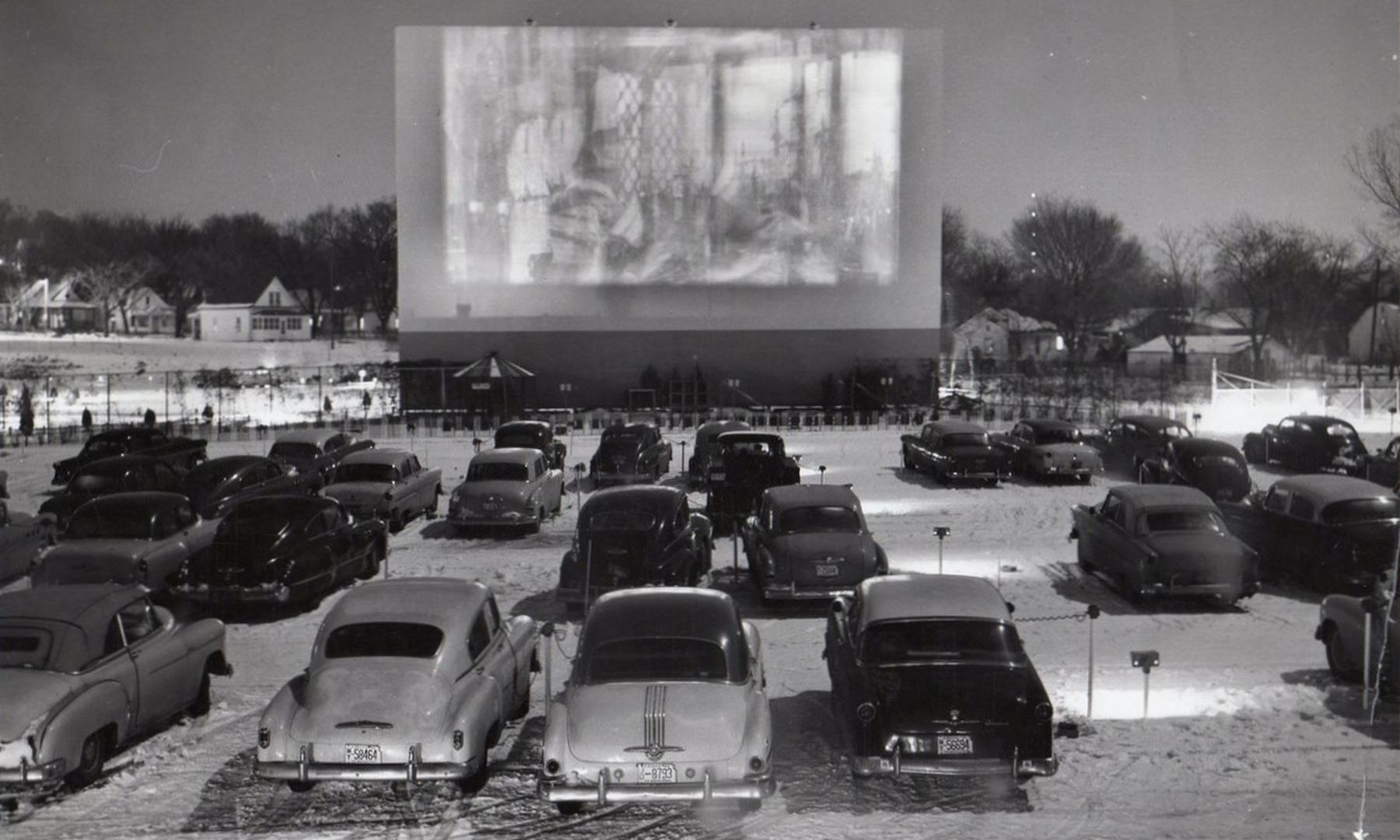 The cinematic machine, whose being is intertwined with that of the intelligent monsters it spawned, required the immobilization of viewing body in order to sensitize it to the patterns of movement it conveyed on screen. In conjunction with the transport apparatus that provided its informing background, it trained the viewer-operator to be susceptible to the codified forms that would now menace it, the monsters that would now chase it in order for it to move again willingly, with all the newfound sensory capacity that this would summon. Cinema, like transport, was fueled by the desire for escape as much as arrival, the ability to divest oneself of constraints as much as amplify investment in them. Attraction is a powerful propelling force—even more so if you are unwillingly the object of it: there is nothing quite like having to flee in igniting the vital motor forces and functions, amplifying the affect, and escalating the rhythms, especially when one's life is on the line. 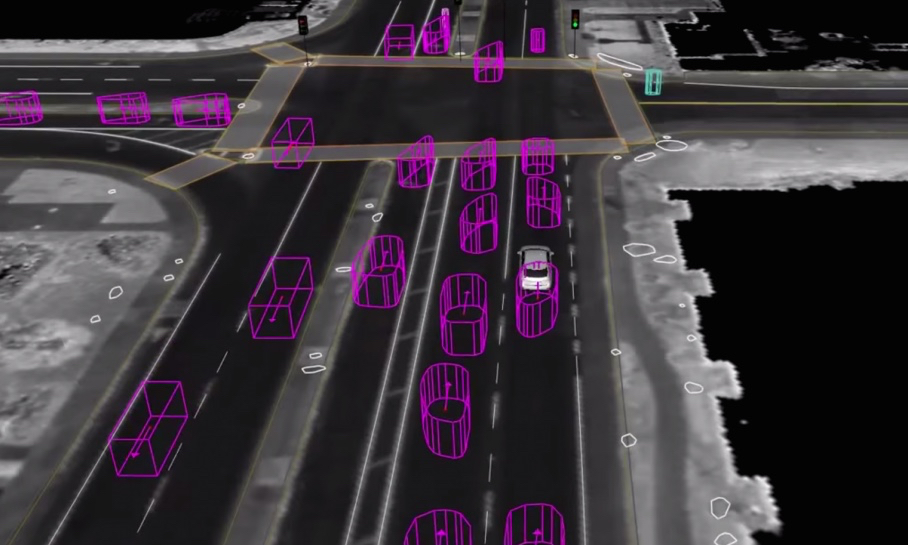 Rhythms and tones move through the body, like music, as the body moves through them. Bodies inhabit the conditions that transport apparatus help implement, conditions that take hold in routines on screen and en route, the activity regimens incited by gears, motors, and patterns of light impressed into awareness through repetitive apprehension and ingrained in corporeality through recurrent execution. These regimens, which combine aptitudes, techniques and support platforms in generative procedures, constitute the automating and endo-shaping operations of the robotic. 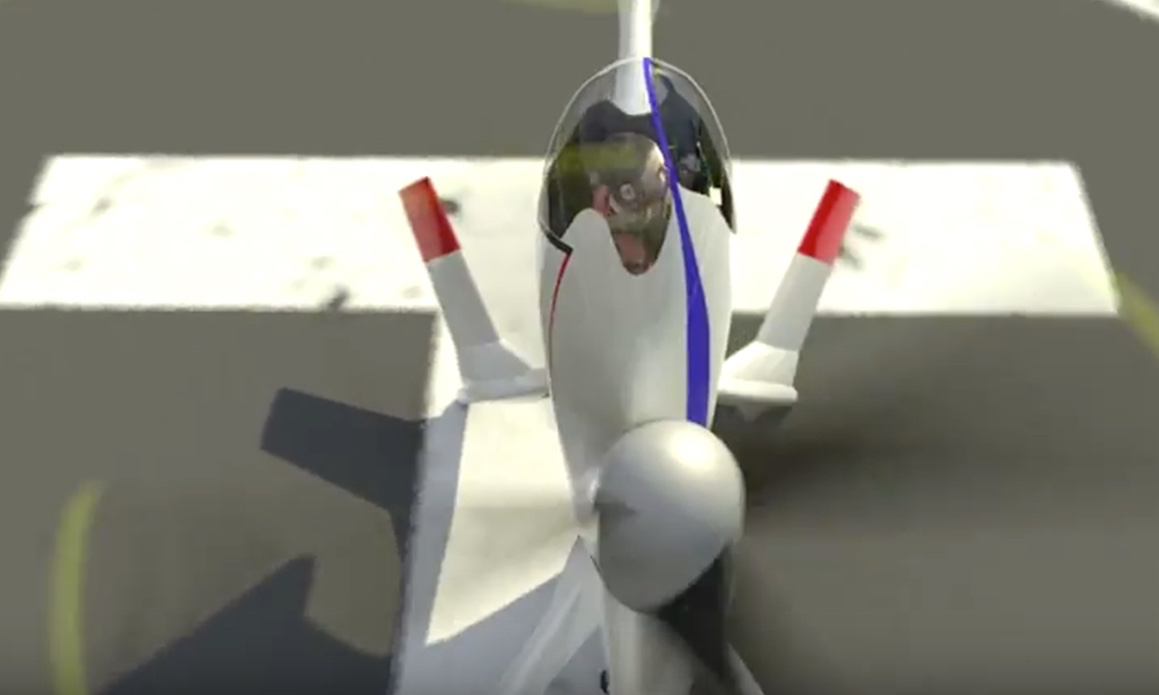 Behold the Personal Air Vehicle (PAV), puzzling inverse of the drone. Its occupied form is even more perplexing than that of the unmanned planes that increasingly swarm the skies, due to its re-introduction of a pilot into a vehicle that no longer requires one. What will these human operators think when, anchored in the sightline specific to their historical role at the helm, they peer out of the transparent portal of the control cabin at their opaque, disembodied analogues flying nearby? 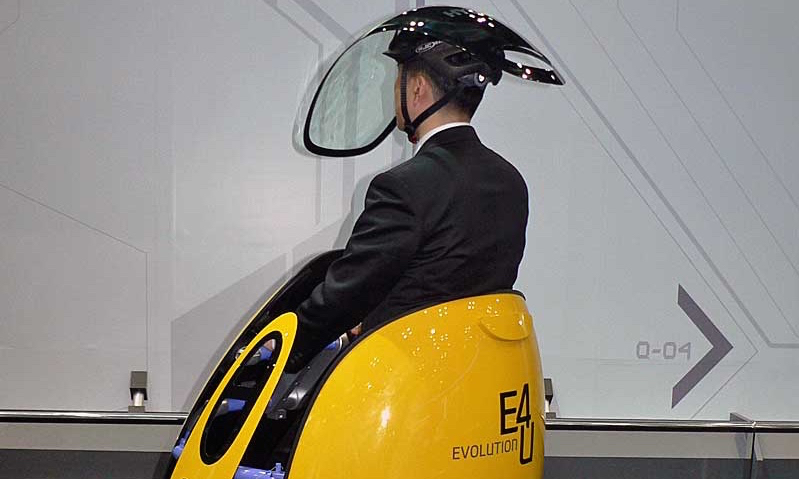 Like most objects of desire, the unmanned vehicle is all the more alluring when it is opaque. The matter of accessing its concealed abundance becomes paramount, yet the precepts of desire prohibit the easy access that would only dilute the power to enthrall. Contraptions like the Hyundai E4U could hardly stage this mix of enticement and unattainability. They have none of the alluring impenetrability of the sleek transport capsule. They are too excessive and earnest to elicit the tensions of resemblance. Revealing their inner machineries, impulses, and operational needs, they reject the paradigm of the enclosure that would solidify their hold. 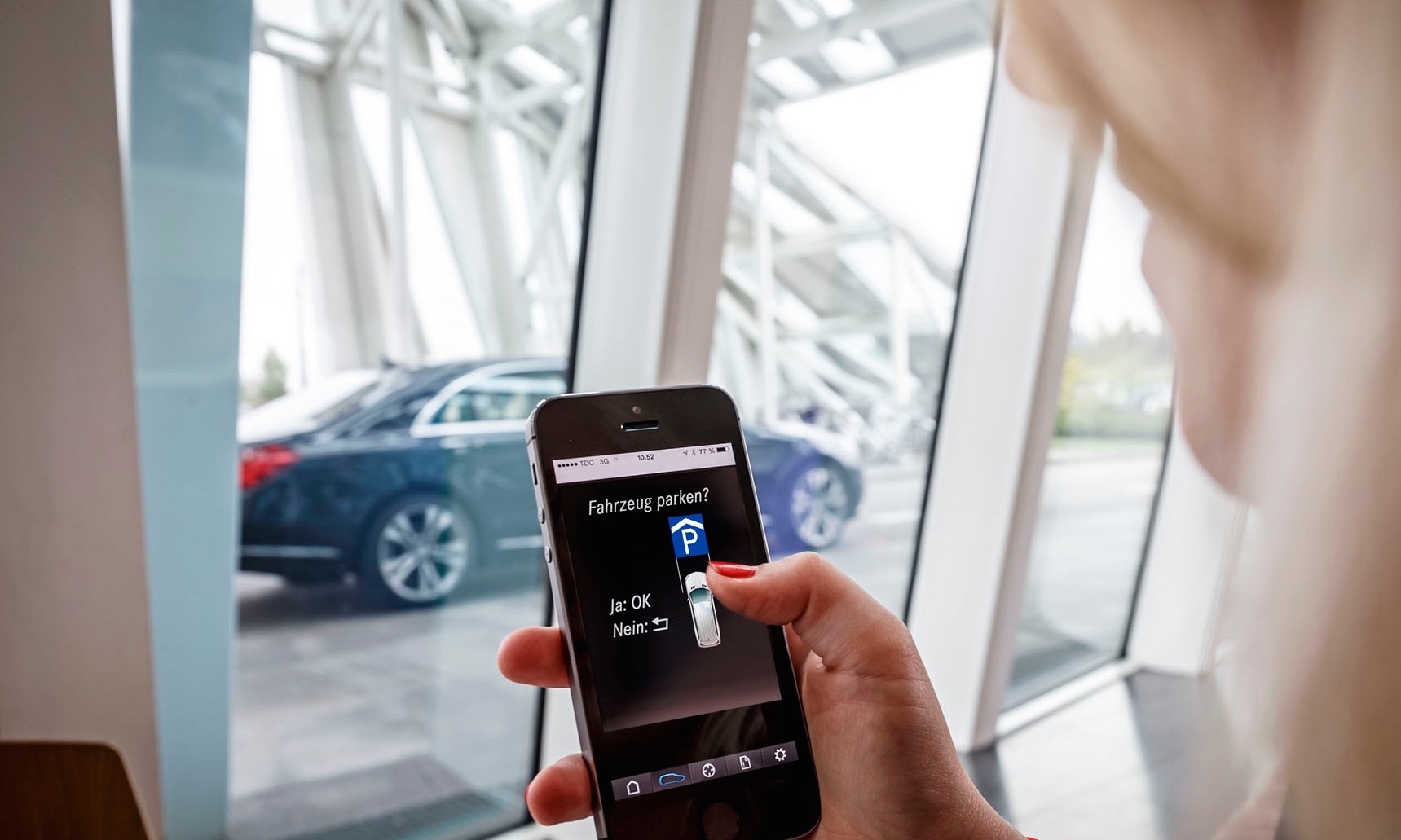 “By 2020, we will have transformed all of our new cars into smartphones on wheels,” proclaims a VW Chief Executive, expunging the actualities of transport in order to collapse the vehicle into the paradigm of the mobile device. Such devices already allow cars to be operated from afar. Apparently, he envisions it soon being entirely unnecessary to get into them. When that happens, the automobile will have at long last fulfilled the level of self-determination anticipated by its prefix—though in the paradoxical form of a machine once geared for transporting bodies, which now attends to their needs in other ways, or attends to other needs entirely. 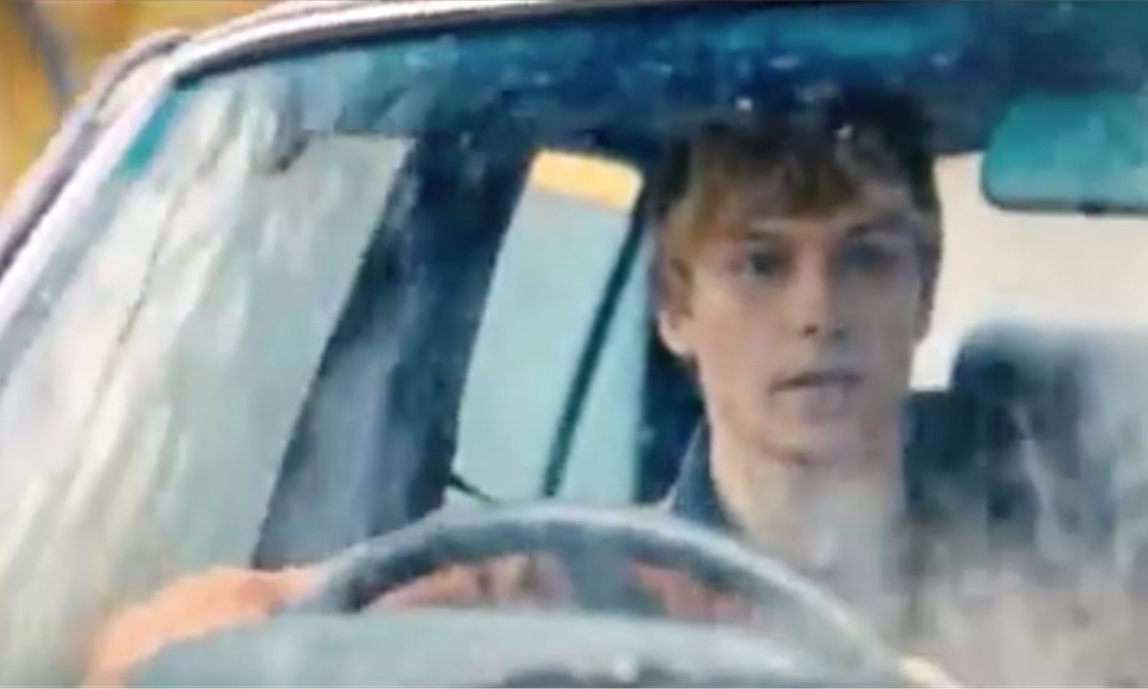 The television drama Humans is premised on robots (“synths”) living among real people. It is organized around everyday situations so apparently simple they are easy to overlook. George is taking his synth Odi for a drive in the countryside. Relishing this moment of being away from the house, George remarks to Odi how nice it is, just the two of them out on their own together. Odi thinks that George has neglected to realize that they are not alone: he has not included the car. And so he corrects him: “And the car, George.”

For the human driver, the vehicle is not an object in a relational field, since he is inside it. The synth doesn’t see it that way. Herein is its most radical potential: the invention of a relationality that retools the structural terms of the social. 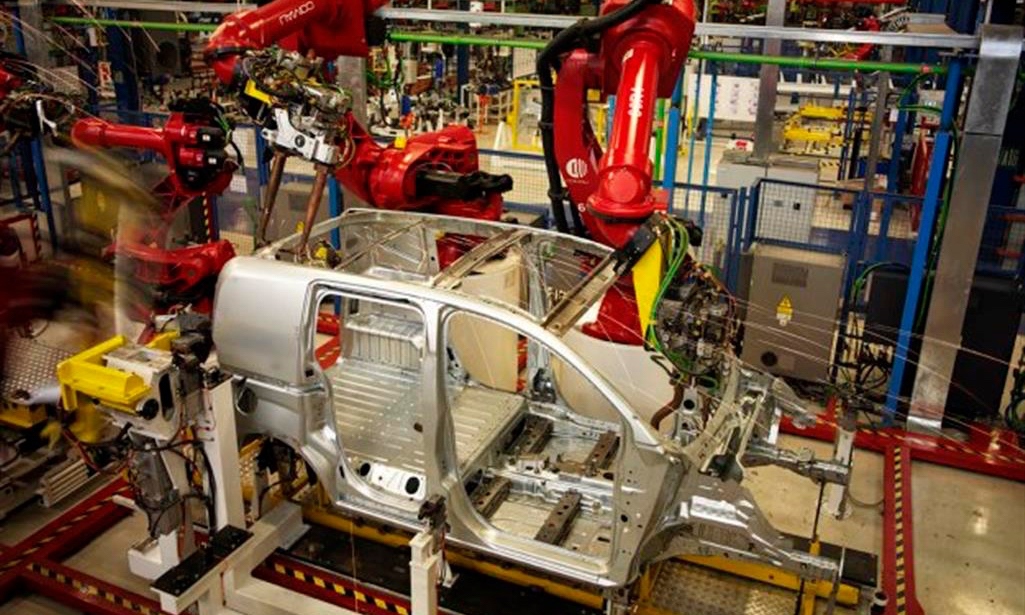 To get inside the vehicle is not to enter an enclosure, but to access an integrated materiality and invest in the nature of the ability it enables. Its sensory exchanges, integrations, and exertions of force are irreducible to presumed confines of form and sentience. Even the simplest operational tasks involve sensory, deliberative, and effective activity of considerable range at levels below and beyond the conscious threshold. Interventions in the paths from cognitive deliberation to physical expression are erotic invitations more than they are hostile acts. They are only adverse by default when thought and action are regarded as essentially human, consolidated in terms of properties that the body alone is seen to control—the agency it would possess is now under siege, the body swept from its ground footing and the command of its attributes pried away, along with the sense of authority that this supports.

The erotic invitation is not one that solicits narcissistic reinforcement—not one of identified forms and personages, however deviant or monstrous, that attract and challenge humans by reflecting their centrality. It is not based on a fundamental separation between interior and exterior, the body and its extensions in the world—interchangeable attachments that, controllable via the architectures of the user interface, augment human faculties but do not disrupt its place. There is no essential corporeity that remains extricable from the robotic, no essential mind that remains separate from the body-as-vehicle, no complex of functions that can simply be embodied in a facile equivalence to the human frame. The scalar domains of sensory, deliberative, and expressive activity, whose broad range and frequency cannot be contained corporeally or accommodated cognitively, are the zones the vehicle invites us, cooperatively, to enter. 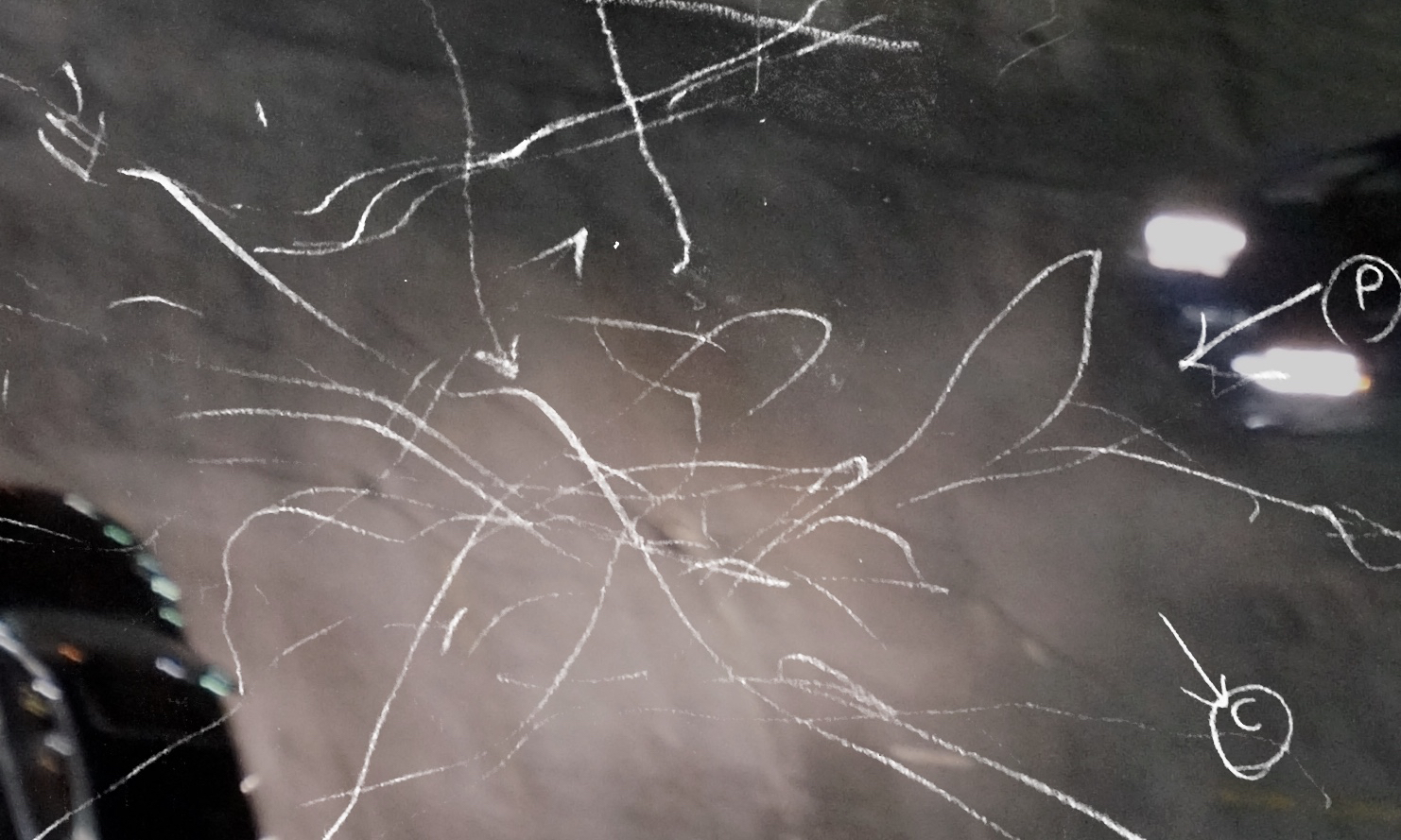