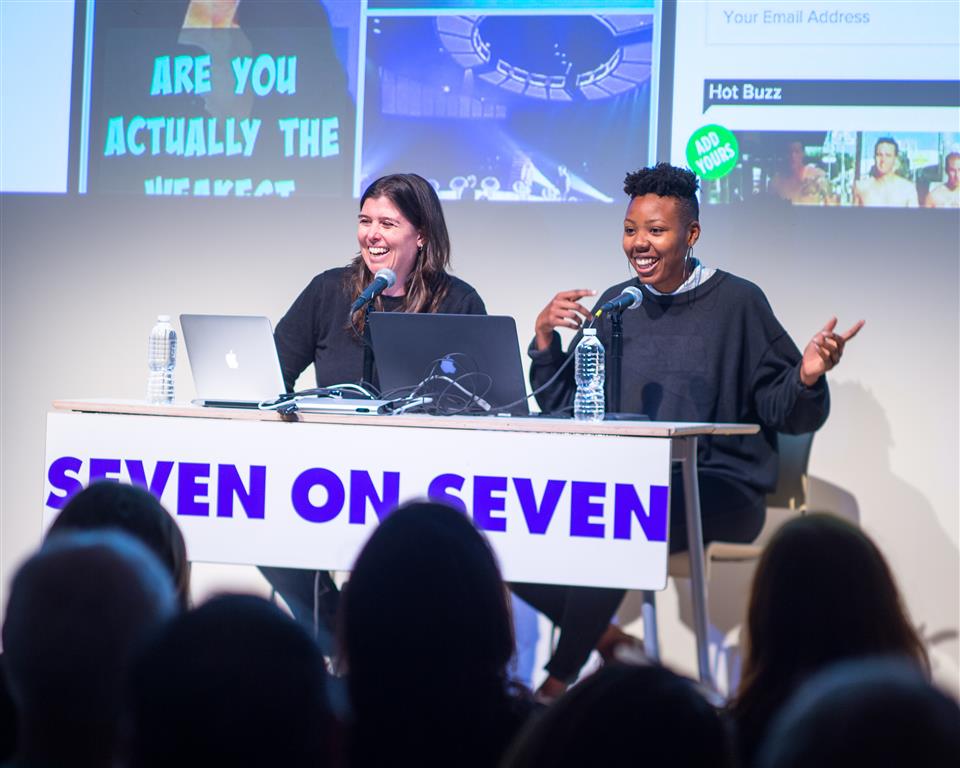 Organized by Michael Connor and Heather Corcoran, this edition of Seven on Seven was held on May 2, 2015 at the New Museum. Read Connor on the program theme, Empathy & Disgust, as well as his post-facto report.

To open events at Seven on Seven, Kate Crawford and Laura Poitras discussed the cultural representation of surveillance in film, television, music and art, post-Snowden.

Kate Crawford is a Principal Researcher at Microsoft Research NYC, a Visiting Professor at the MIT’s Center for Civic Media and a Senior Fellow at NYU’s Information Law Institute. Her research addresses the social impacts of big data, and she is currently writing a new book on data and power with Yale University Press. She is on the advisory boards of the Information Program at the George Soros’ Open Society Foundation, and NEW INC.

Laura Poitras is a filmmaker, journalist, and artist. Her film Citizenfour won an Academy Award for Best Documentary in 2015. She has received many honors for her work, including a MacArthur Fellowship, Guggenheim Fellowship, and a Peabody Award. She has attended the Sundance Institute Documentary Labs as both a Fellow and Creative Advisor. Her film My Country, My Country, about the U.S. occupation of Iraq, was nominated for an Academy Award. Another film in the trilogy, The Oath, focused on Guantanamo and the war on terror, and was nominated for two Emmy awards.

Liam Gillick is a British artist based in New York. He has had solo exhibitions at the Whitechapel Gallery, Palais de Tokyo, and MCA Chicago, and has work in the public collections of the Museum of Modern Art, Tate Modern, the Guggenheim Museum, and more. He was selected to represent Germany for the 53rd Venice Biennale in 2009.

Nate Silver is a statistician, political forecaster, and founder of FiveThirtyEight, who became known when his predictions during the 2008 presidential election trumped most mainstream polls. He is a contributor to The New York Times Magazine and has appeared as a commentator on CNN and MSNBC. He was named one of TIME’s 100 Most Influential People in 2009.

See their work: EITHER WE INSPIRE OR WE EXPIRE

Camille Henrot lives and works in Paris and New York. Her research-based practice mines archival troves to explore such wide-ranging systems of knowledge as anthropology, ethnography, and the history of technology. She has presented a solo show at the New Museum and won the Silver Lion at the 55th Venice Biennale.

Harlo Holmes is the Director of Newsroom Digital Security at Freedom of the Press Foundation. She strives to help individual journalists in various media organizations become confident and effective in securing their communications within their newsrooms, with their sources, and with the public at large. She is a media scholar, software programmer, and activist; and contributes regularly to the open source mobile security collective The Guardian Project.

Ai Weiwei is an artist and activist whose work encompasses sculpture, installation, photography, film, architecture, curation, and social criticism. His art has been featured in major solo exhibitions at venues including the Mori Art Museum and the New Museum. He was the recipient of the Václav Havel Prize for Creative Dissent from the Human Rights Foundation in 2012.

Jacob Appelbaum is an independent computer security researcher and hacker, and core member of the Tor Project.

Martine Syms is an artist and conceptual entrepreneur. She is founder of Golden Age, a project space focused on printed matter, and Dominica, an imprint dedicated to exploring blackness as a topic, reference, marker, and audience in visual culture. Her artwork has been exhibited and screened extensively, including recent presentations at Karma International, Bridget Donahue Gallery, the New Museum, Kunsthalle Bern, The Studio Museum in Harlem, Index Stockholm, MOCA Los Angeles, MCA Chicago.

Gina Trapani is an award-winning writer and programmer. She is co-founder of ThinkUp, a social data insights engine, and founding editor of Lifehacker. She created Todo.txt and Narrow the Gap, a US Bureau of Labor Statistics data-driven website about the gender pay gap. Her work translates cutting-edge technology into insights that boost personal productivity.

Hannah Black is an artist and writer. Her work is mostly assembled from fragments of pop music and autobiography, drawing on feminist, communist, and black radical thought. Her videos have been shown at W139, Embassy, and Triple Canopy, and her writing in The New Inquiry and Art in America. She participated in Whitney Museum’s Independent Study Program.

thricedotted is a language hacker who commands a legion of over thirty bots on Twitter, including @portmanteau_bot and @ wikisext. They also meta-authored the automatically generated novel The Seeker for #NaNoGenMo 2014. They are a PhD candidate at the University of Washington working in natural language processing.

Trevor Paglen is an American artist, geographer, and author. He constructs unfamiliar, yet meticulously researched ways to see and interpret the world through photography and other media. He has recently been exhibited at the Metropolitan Museum of Art, Tate Modern, and the Walker Art Center, among others.

Mike Krieger is co-founder and Technical Lead of Instagram. A native of São Paulo, Brazil, he holds an MS in Symbolic Systems from Stanford University. Prior to founding Instagram, he worked at Meebo as a user experience designer and front-end engineer.

Stanya Kahn is an interdisciplinary artist working primarily in video. Humor, pathos, and the uncanny emerge as central modes in her hybrid media practice. Recent solo exhibitions include the New Museum and Cornerhouse, and her works have been included in exhibitions at the Whitney Biennial, the California Biennial, the Museum of Modern Art, and more.

Rus Yusupov was co-founder and Creative Director of Vine. A digital product designer and entrepreneur, he holds a BFA in Graphic Design from the School of Visual Arts. Prior to Vine, he founded design studio Big Human and was an adjunct instructor at NYU.