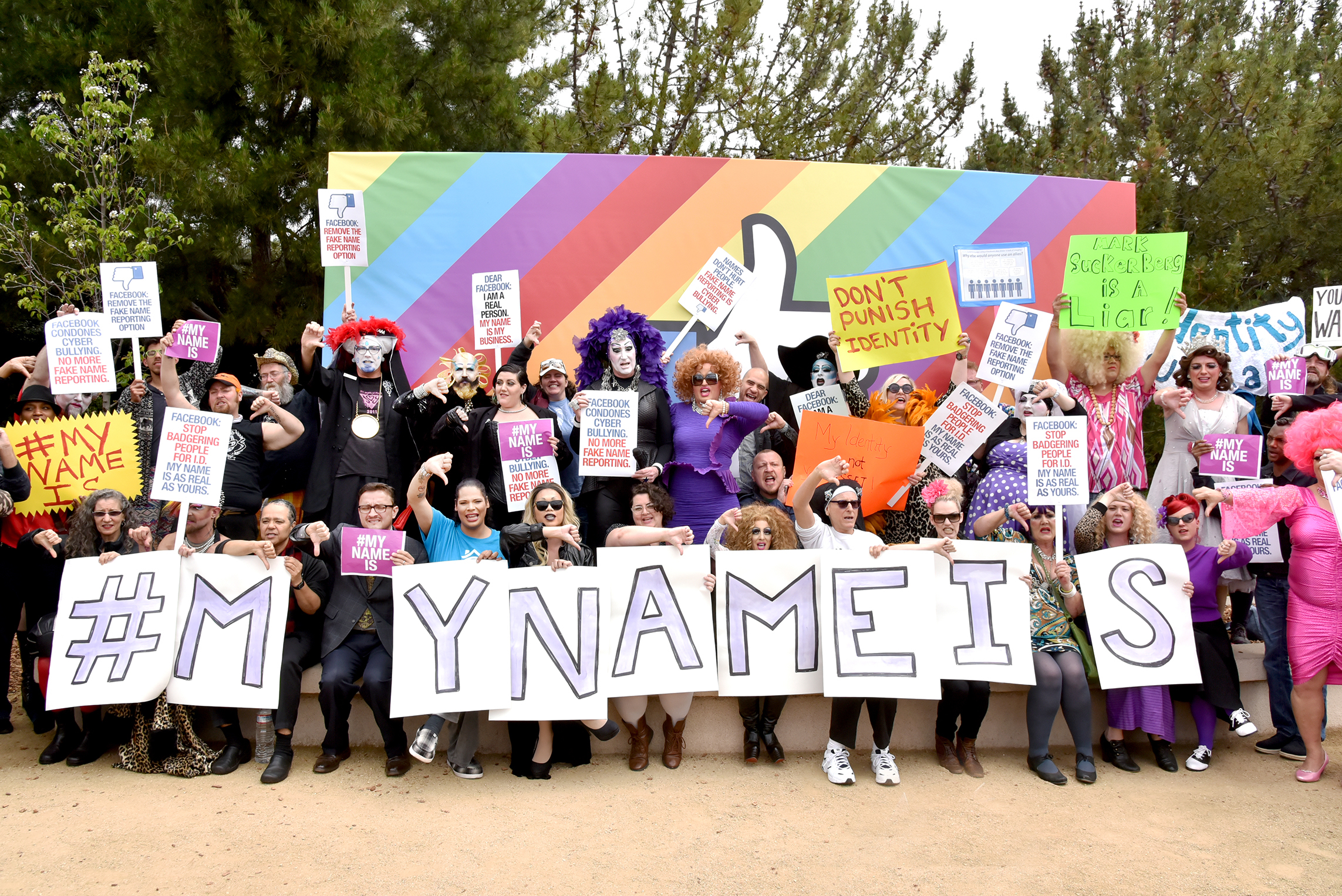 Yesterday, Caitlyn Jenner introduced herself to an eager public via a magazine cover, a Twitter account, and a Facebook page. The Twitter account gained a million followers faster than the previous record-holder, Barack Obama, and the Facebook page garnered hundreds of thousands of likes in its first day. Coming a week after the news that IMG had signed Hari Nef (onetime host of Ed Fornieles's NY NY HP HP for Rhizome), the news heralded a new level of public visibility and acceptance for transgender people.

The irony of Caitlyn Jenner's Facebook popularity is that the social media site has such an unsupportive official stance toward name changes in general. The policy not only forbids creating profiles under stage names or personas or alter egos, it forbids profiles under any name that can't be backed up by a legal document, such as identification or a piece of mail. (The rules are different for Pages, such as Jenner's). Facebook is like the right-wing uncle who deliberately misgenders you, on principle.

Also yesterday, to mark the start of internet safety month, a group of protestors gathered outside Facebook HQ in Menlo Park, California, to protest this real name policy. Many of those protesting were drag queens; meanwhile, indigenous leaders sent letters of support. Facebook requires users to register under their "authentic" name. If a user is "flagged" for using an assumed name, Facebook will force them to prove their identity, or face account suspension. Some progress in this fight was made after a meeting with a group of drag performers last fall, and Facebook published a blog post yesterday defending the revised policy. The post argued that the real name rule helps improve accountability on the site, which would be true if there was much accountability for online bullying in general. It also argued that the burden of proof of one's identity has been lowered, since one can now offer "a piece of mail, a magazine subscription, or a library card" as proof of their name, although in the US receiving mail under an assumed name is also illegal. So the fight goes on.

Images of yesterday's #MyNameIs protest were a reminder of Facebook's continued role as something like a public international utility. There have been many reports in the press of protestors targeting tech companies for their environmental impact, labor standards, and effects on San Francisco, but it's much harder to think of examples of sign-wielding protestors targeting a software company's terms of service. What's particularly remarkable is that even though the company's rules are actively hostile to sex workers and drag queens and many other communities, the activists aren't hoping to leave the social network or find alternatives, but to lobby for a rule change. Far from wanting to harm Facebook and reduce its power, the activists wanted to make it a more accepting environment, which could even increase its already vast reach.

Despite the lack of response from Facebook, there was one ray of hope at the end of the day. When the protest was over, the activists returned to San Francisco on a bus sponsored by Ello.

Michael, have you considered shutting down Rhizome's public editorial presence and moving it to Facebook? You acknowledge Facebook's "continued role as something like a public international utility." It seems that most Rhizome readers have moved their art discussions and social lives to this utility. The internet is no longer a diverse rhizomatic web but rather a centrally controlled authority that imitates rhizomatic diversity. You should be on the inside of that, agitating for change, rather than complaining from the outside where no one can "like" you (and those likes can't be counted to prove the strength of your ideas). Of course, Facebook is a business, and you would have to be careful about posts that support rival businesses, such as the ones that hire buses to move mock-protestors to anti-Facebook astroturfing operations.
Best, Tom

Yes, I have considered it. However, I'm very excited about our work in dynamic web/social media preservation, and I think this demands that we remain invested in a logistically separate publishing platform, even at the cost of some audiences. The Awl has had really good coverage on this issue recently: http://www.theawl.com/slug/the-content-wars

"Logistically separate publishing platforms" are absolutely the way to go, especially for artists, non-profits, and other content providers that aren't dependent on selling editorial wares. Herrman's articles in The Awl seem aimed mostly at the future of content-providing for profit. So diverse media outlets all start to look the same because they are grabbing eyeballs in Facebook and Twitter feeds. The idea of "clickbait" shifts from attracting attention via search engine keywords to attracting attention in timelines where hundreds of other providers are embedded. This shouldn't apply to sites that rely on donor-dollars and/or offer some kind of detached perspective on that deranged, shoehorned environment.

Just curious (but not curious to sign up for Facebook), is Rhizome embedding stories there? That might explain this essay centered on a popular sports figure whose gender change everyone in the world felt they needed to "weigh in on" over the last few weeks. You have your own editorial slant on this tabloid-y fare (Facebook "real name" policy vs identity choice) but it seems like concern trolling if you aren't actually on Facebook. What's your stake in this? Couldn't you suggest that Rhizome readers follow your example and seek logistically separate publishing platforms (besides Ello)? Domains aren't so hard to come by.

This, when paired with Orit Gat's piece on criticism strike a real chord with me. Ever since the mid-2000's, I've felt an uneasy tectonic shift in regard to media art practice on a number of levels. Part of it is articulated by Gat's ideas on getting what we 'pay for' with service criticism, and that the idea of criticism and curation has been Rubik's Cubed by social media. In the beginning (yes, back in those jurassic early 90's, which is also relevant), I felt that service was more a component to the lists.

I find that while there is some of that left, so much more has gone to a Warholian narcissism. But also, the genre has generated established artists in the Contemporary (despite Claire Bishop's protestations back then) that might bump into James Franco, and personal strategic brand-positioning, which again is nothing new. Perhaps it is also part of that work discourse of the "generational dialogue" Michael Connor and I have had on occasion (read: You're a mid-career artist, Pat, and unless you've capitalized, bienniales are a young person's game).

So, while that previous paragraph was intentionally inchoate, which is how I feel critical discourse is on the Net, and partially why I have been relatively silent here for at least a couple, if not a few years.

What is one going to say, and who is going to hear it? Most of the discussions I see here have a response analytic of one or two, and most of my conversations with the Bruce Sterling clade are on The Well, and people like Curt Cloninger are deeply rooted in the FaceTubes. Is it any surprise that Southeast Asians are asking for phones with "The Internet (Facebook)" on it and there are Ello, Diaspora, and so on trying to destabilize Facebook, who by the way, is doing backdoor Terms of Service sleight of hand to squelch activism?

Not on your life.

I agree with Michael that a repository here at the new Museum is essential, and I am personally moving further into straight up atoms and bits print when possible. It's being a victim of one's own success, I guess.

There is a closing metaphor that got my attention in the past few weeks when Apple bought up the Augmented Reality company Metaio, and they said that your work will function until December 15th. Period. Bye. In a way that's why Second Front makes videos, in case Linden Labs suddenly goes dark. It's just the way it is.

I think there's big issue with making any assumptions about coalescence, ephemerality, or even a willingness to take the time to really communicate, for that matter. We're all on our platforms, selling our selfies, promoting our group's brand-position, checking our analytics…

I'm not wishing for the 90's. That's dead, for sure. But while I chime in still because I want to have something constructive to say, but maybe the zeitgeist has hit me and I also now do it because I want to, it's a seed for a book chapter, or there's someone specific I want to talk to.

And by the way, I am on Ello, but I check it monthly.

Mid-'00s blogs were an improvement on lists, in that authors could illustrate stories using directly embedded images and media files, and host real-time comments that then became an easily searchable public record. The so-called blogosphere (which still exists but I find myself pitifully pining for) allowed a certain type of nerdy amateur expert to flourish, free of the clueless editorial guidance that often comes with the for-profit model. Gat's essay jumps straight from the print era to "apps" without considering those "logistically separate publishing platforms," one of which is Rhizome.