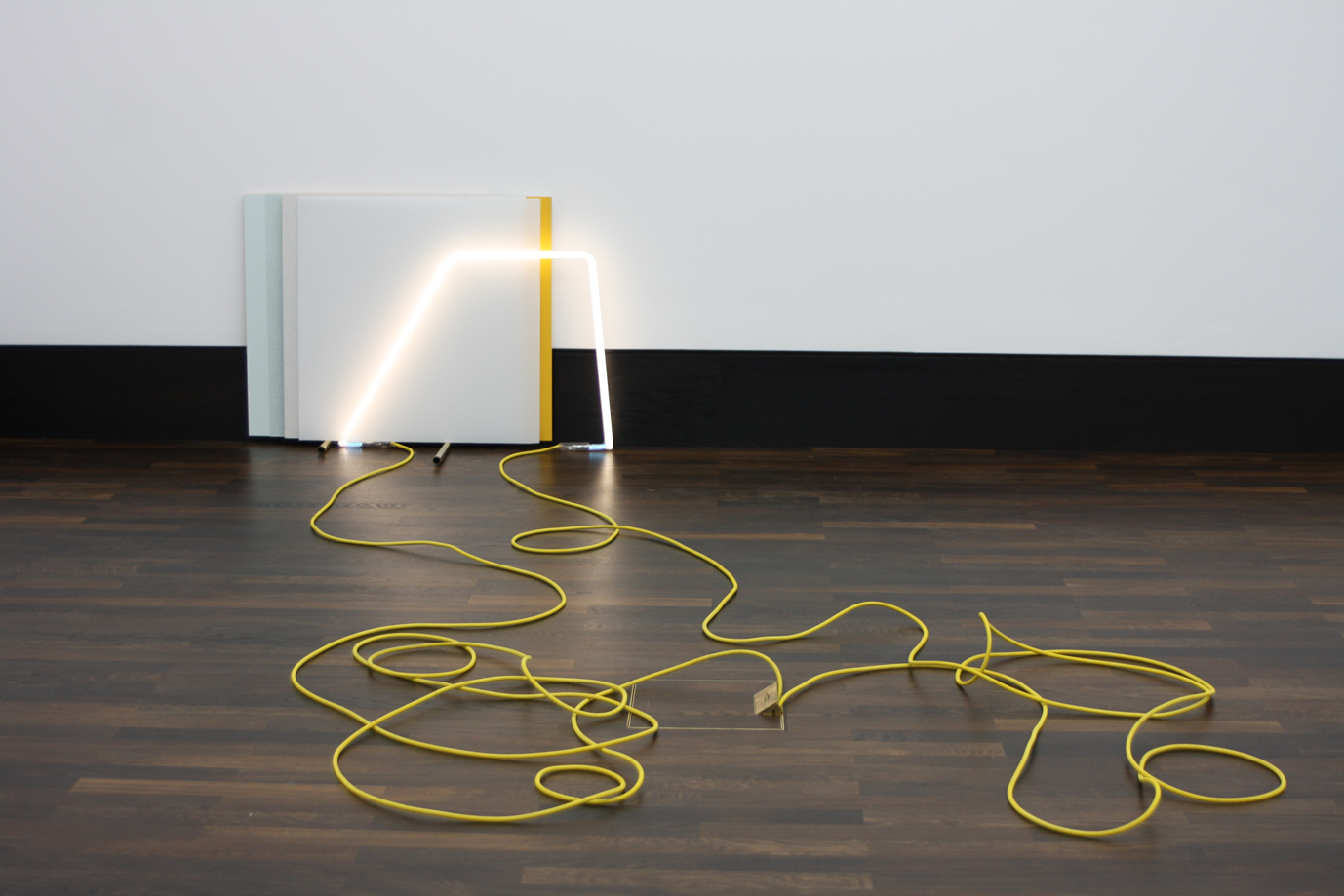 The gallery website displays an image of the Network Utility application performing a traceroute; the image links to the URL of the work, www.whichpixelamistandingon.com. This automatically plays a short looped animation of merging landscapes. There's a textbox below the video asking for GPS coordinates and when these are submitted the viewer can download a digital image.

I'm interested in thinking about what is tangible in digital representations of space and I suppose the title makes me think about how objects and structures "exist" there. Boundaries come into this as well: how you define exactly where you might be within that digital space.

For example, I was thinking a lot about the spaces of 3D drawing programs like SketchUp because space can become warped and indeterminable. In those potentially infinite planes you get these newly mapped spaces that correlate to reality, that relate to topography, mapping and your sense of location. But they also become plastic and interchangeable and they start to pull apart any one perspective of space. 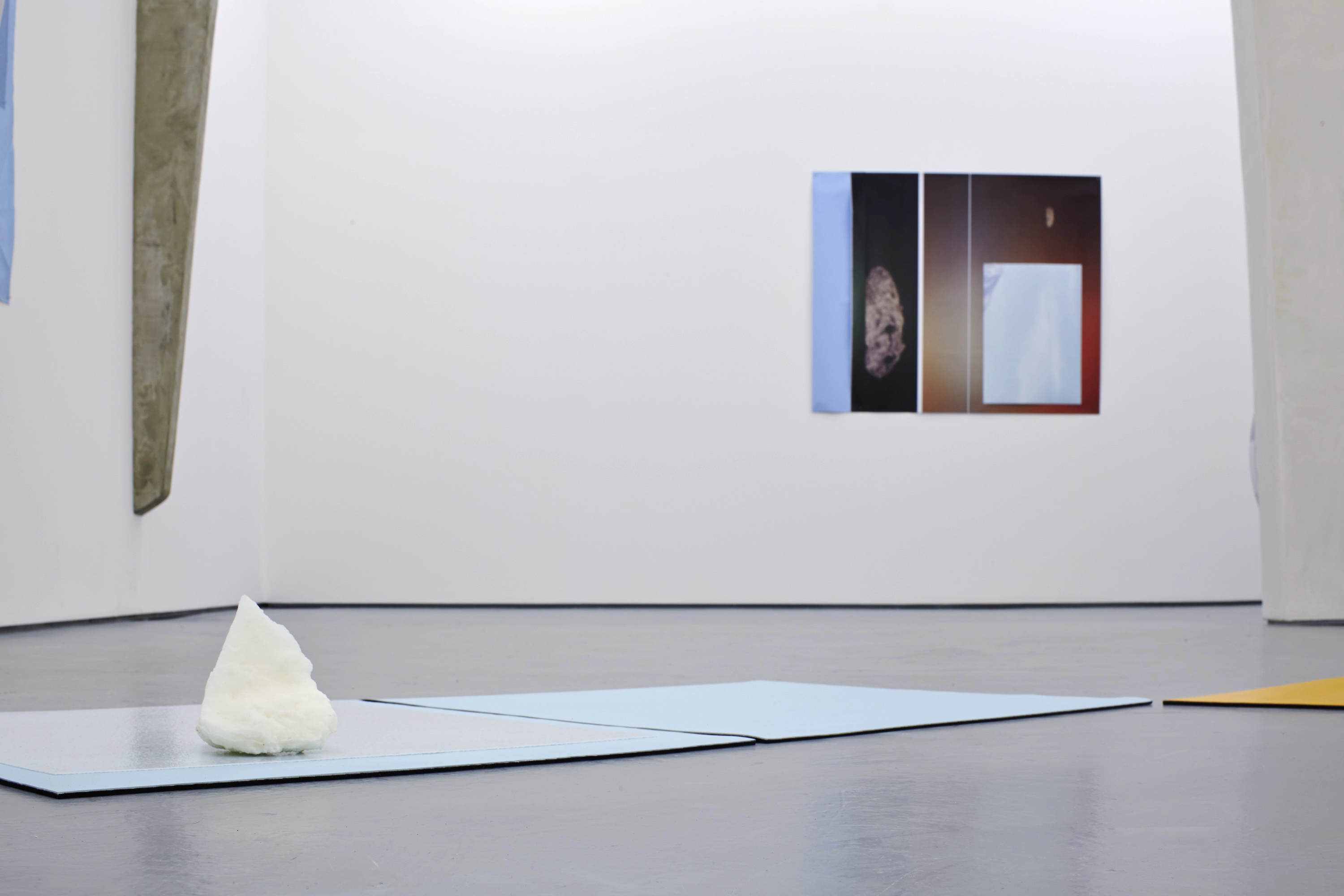 How does this exhibition reflect your interest in systems of production and dissemination, both on and offline?

In this show a lot of what I'm thinking about is obviously the location of the work but also how a lot of the structures we have can be quite arbitrary. I was looking at the early stages of data modeling, and the beginning elements of how the parameters are set for some of the entities can be incredibly arbitrary or random, bringing along their own attributes and relationships. A part of what I've been interested with in this piece is playing on that and I wanted it to be something that the viewer navigates through and participates in. The Landsat satellite images (that are used as a starting point for the landscapes in the animation) are taken from the locations along the traceroute path of a packet of information (in this case, a packet that runs from the gallery space to its web server). But the way the images were gathered via the search criteria also produced random results, a process I felt like was mirroring the arbitrary nature of data visualization.

Some examples of the things that I had been looking at for "Passage and pair" at Maria Stenfors (2013) or the Module and Vessel sculptures included my experience of the layered pedestrian routes in Hong Kong and the way American urban planning is framed through a car's windshield. The work has migrated from thinking about the uneasy space between planning and design of structures in my physical environment to a digital one. As our town halls get replaced and public services become digital, data centers become the new form of civic architecture, progressing from their former residences to anonymous new structures on the side of major roads. Despite thinking about these ideas, the work has remained quite physical up until now. I've been interested in bringing it into the workspace by not necessarily using the digital materials themselves but some of their ideas and components that enter into the work, almost as a methodology. One way I've tested this out is by arranging the work in a space according to the data that I find, using it as a way to map or place the works, trying to think about what deeper thing unfolds from that or how these structures can influence each other. 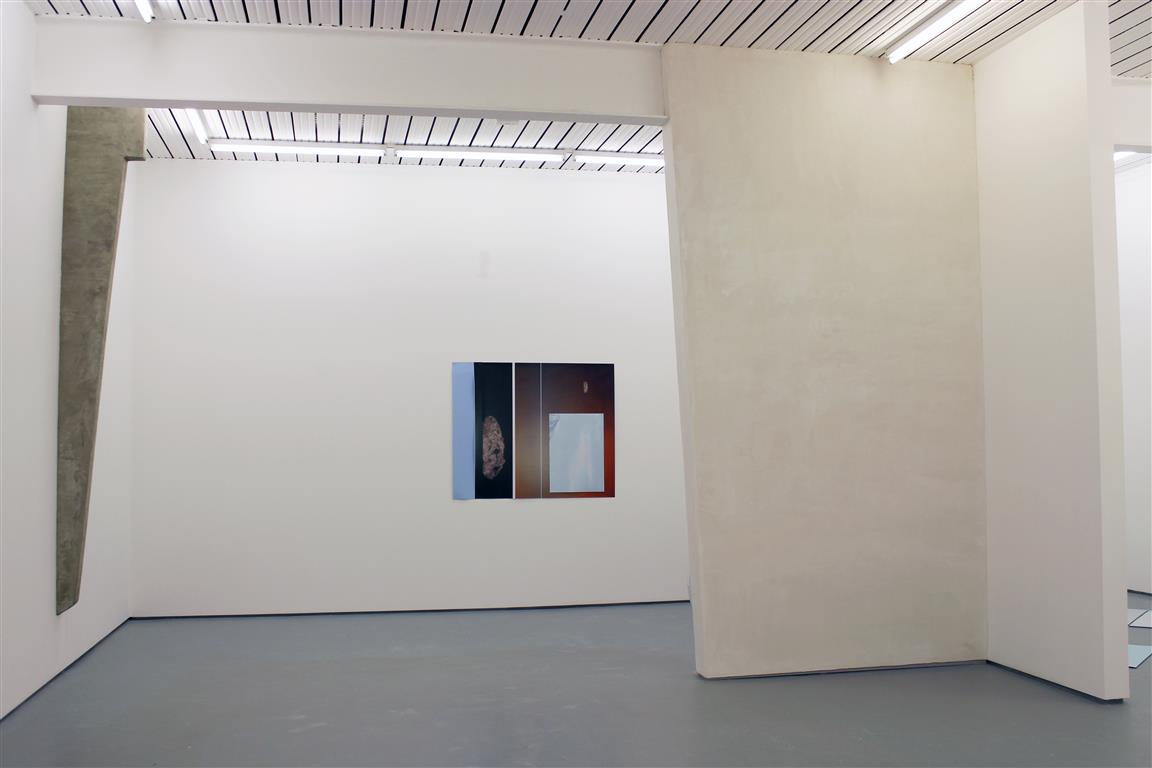 Has the fact that this is an exhibition, which has a closing date, changed your approach to this project? What will happen to this work at the end of the exhibition?

The work is up for two weeks for the viewer to navigate from the gallery site to the domain page and download an image. The image is the last remnant of the work after that, whatever uses people make of it.

The image was made using a free 3D sketchup drawing of a rock, collapsed to show the flattened polygons. The rocks exist in this digital space, as something that's supposed to be three dimensional but is actually hollow and of an indeterminable scale that can be warped and flattened at the same time. The two don't necessarily correlate and they change in unexpected ways. (A vinyl flooring and wallpaper pattern that's used as a backdrop for some of my sculptures uses a similar source.)

It's also a chance to experiment with my own data gathering: anything that is submitted into the GPS text field is instantly sent to me. This will maybe shape future works. 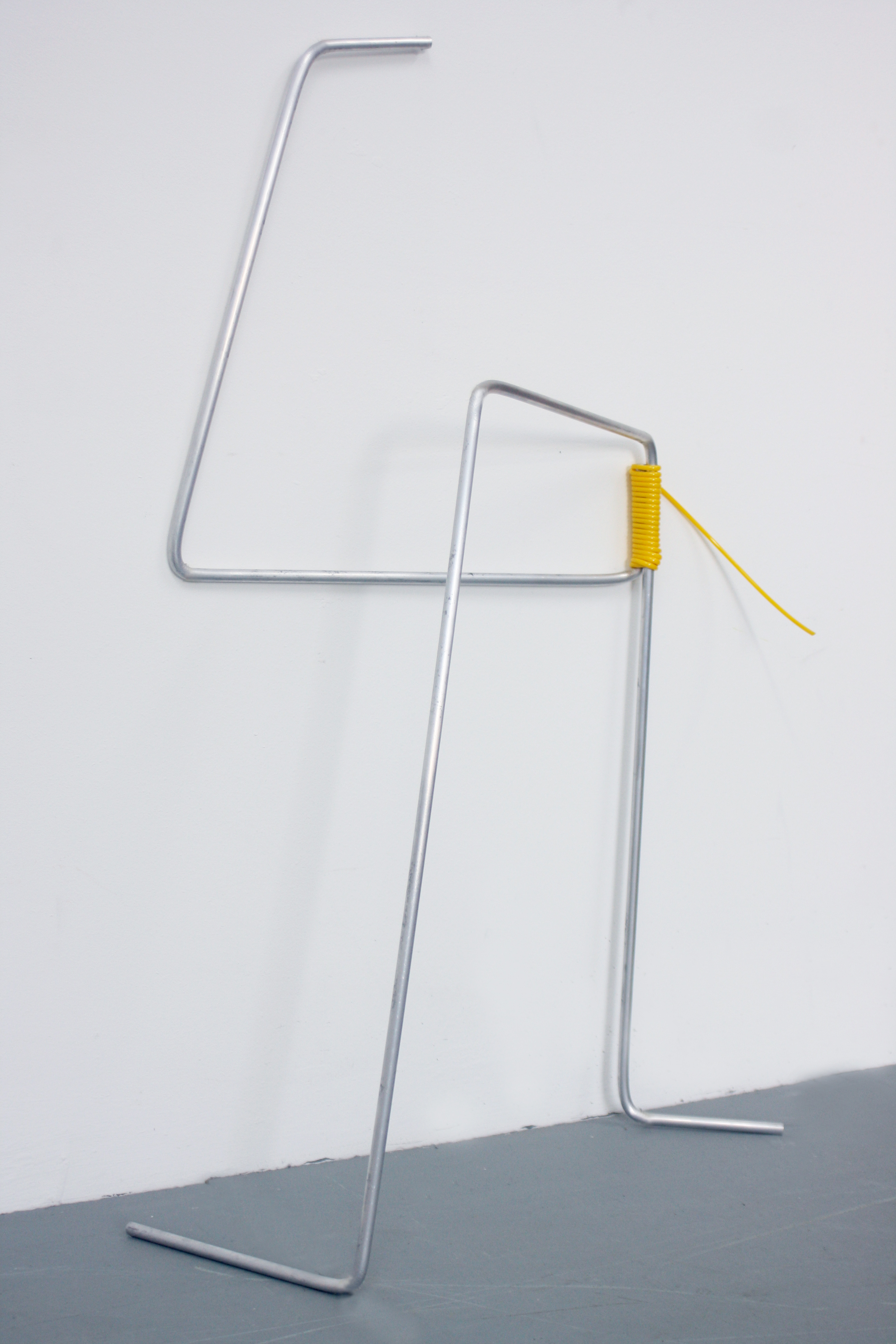 This is not your first work experimenting with online dissemination and the online object. What is the relationship you see between the materials you produce and their presence online?

The first work that I made that played with the location of the artwork was part of an edition where I bought a domain name and made a plain white A2 print with the text in the middle saying:

which was also the title of the work); on the reverse of these prints was a password. The idea was that whoever bought the print would go to this web address and see the artwork (a color digital image of a quite architecturally intriguing rock). Beneath the image was a box where you could submit the password that would give access to a black and white, lower res version of this image, along with precise printing instructions. I consider the printout to be a record of the transaction. I was interested in playing with how someone can own something that exists in this space, copied into probably five different locations in different datacenters and also appears on your browser as a copy. This inability to grasp and take hold of the work that you own intrigued me.

We've talked so much about the relationship between the online and offline object here. I know you're also thinking about how this shift/exchange can be translated into public space. What is the public art commission you're planning for Tottenham Court Road, and how does it relate to that area's traditional connection with technology?

Tottenham Court Road was the place to go and buy transistor radio parts, stereos and computers; I remember going there as a teenager to buy a stereo and a minidisc player. This has now died out with internet commerce, and I've been looking deeper to the older heritage of the site owned by the Bedford Estates family since 1669. I worked with the material in the Estates archive, and looked at the way the area has been subject to development over the past several centuries, particularly for educational purposes, with many of London's universities based on that land. I began thinking about this history alongside the movement from analogue to digital and decided to translate some text taken from the 4th Earls' commonplace books. These are a gathering of notes from lectures, sermons, and books that he either heard or read in his lifetime which I imagine as something like the modern day Wikipedia. This Earl was an important figure in British history who developed Covent Garden with Inigo Jones and helped to drain the Cambridge Fens. I chose a section from the commonplace books titled "Knowledge" to be translated into binary code.

The building façade is a designed essentially as a grid of windows, so the idea is that the 1s and 0s will be transcribed onto the building by using the windows as the basis for the 0s and a strip of soft light positioned inside the frame as the 1s. The result would be a section of the pattern that could ostensibly be read. It's still ongoing and is at present yet to be confirmed by the London Borough of Camden.

A further part of it has involved working with a UCL Physics lecturer to make a quantum cryptology experiment to create a key that can be the basis of a pattern used within the building as well. The building essentially becomes a vessel for coded sections of information that won't necessarily be legible to passerby and need to be decoded. Nonetheless, it becomes this source of potential knowledge, thinking of technology as it translates not only from past to present but also from present to future. 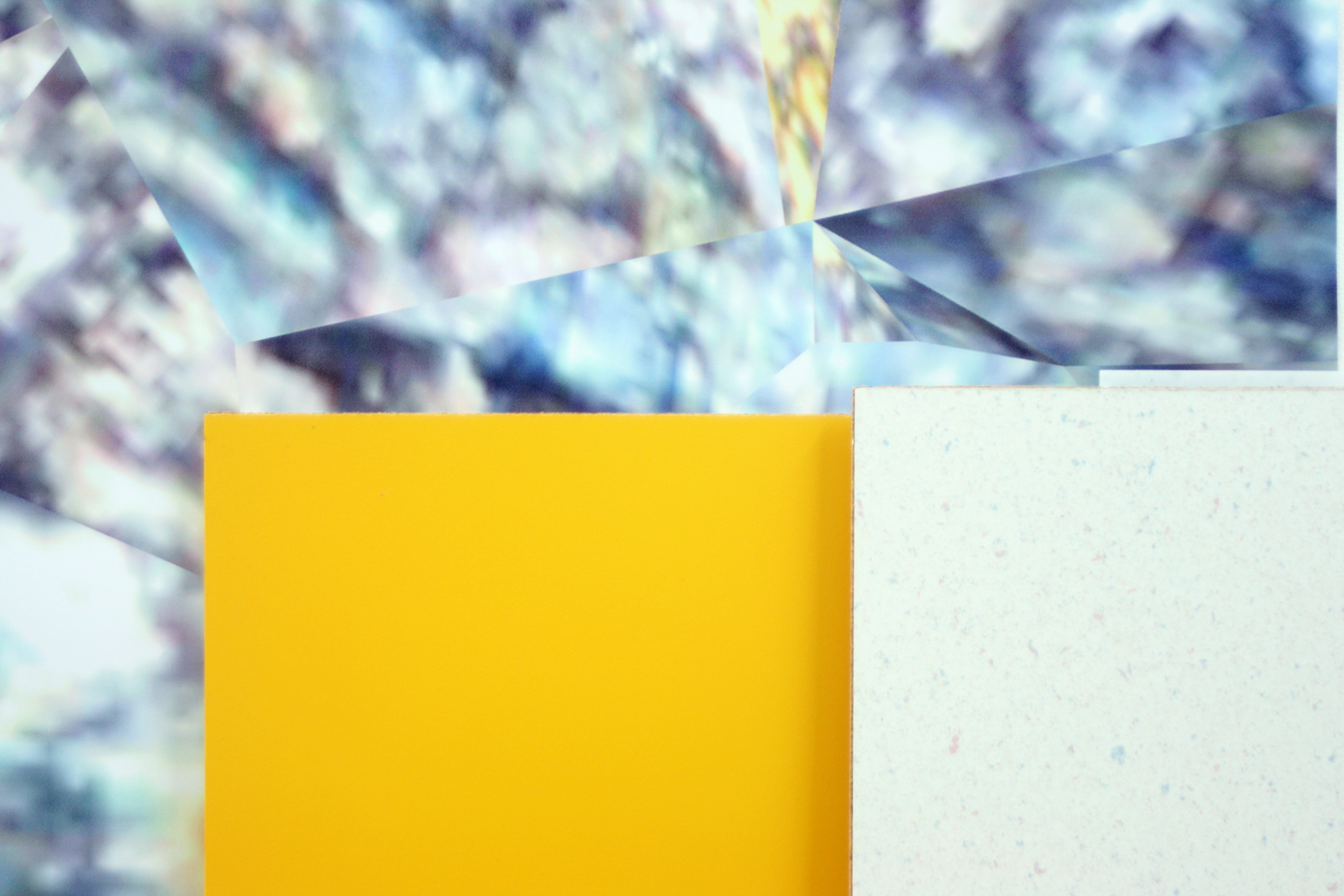 Location: Living and working in London

I've always been pretty technological if you can say that, I don't know if it comes from being half Japanese and having family that worked in companies that produced computer chips and satellites, but I've always been very curious about discovering new things through it—but this doesn't necessarily mean that I can use it all! I made a few 3D printed pieces, which was novel at the time and made other works using 3D routers, etc., but I've arrived at the point now where I'm more interested in using this kind of technology for a reason rather than the novelty of it, I think in many ways it's no different from a bandsaw, or a chisel, it's just another tool. But nonetheless it can be fun to explore perhaps because I have a strong interest and curiosity in what materials do and how I can play with them and understand their limitations. For example, I've been making the more sculptural works by hand mainly because I was thinking a lot about how we live among things that are mass produced. I felt it was important to make the things that have that mark of imperfection, like with the more recent modules, metal sculptures and neon works.

I've been teaching for about six years, five of which have been at The Slade School of Art in London. It's great to be working there but also to be surrounded by conversations that feed back into my practice. Before this I worked for several years as a project assistant for a public art organization in London that produced exhibitions outside conventional gallery spaces.

What does your desktop or workspace look like? (Pics or screenshots please!): 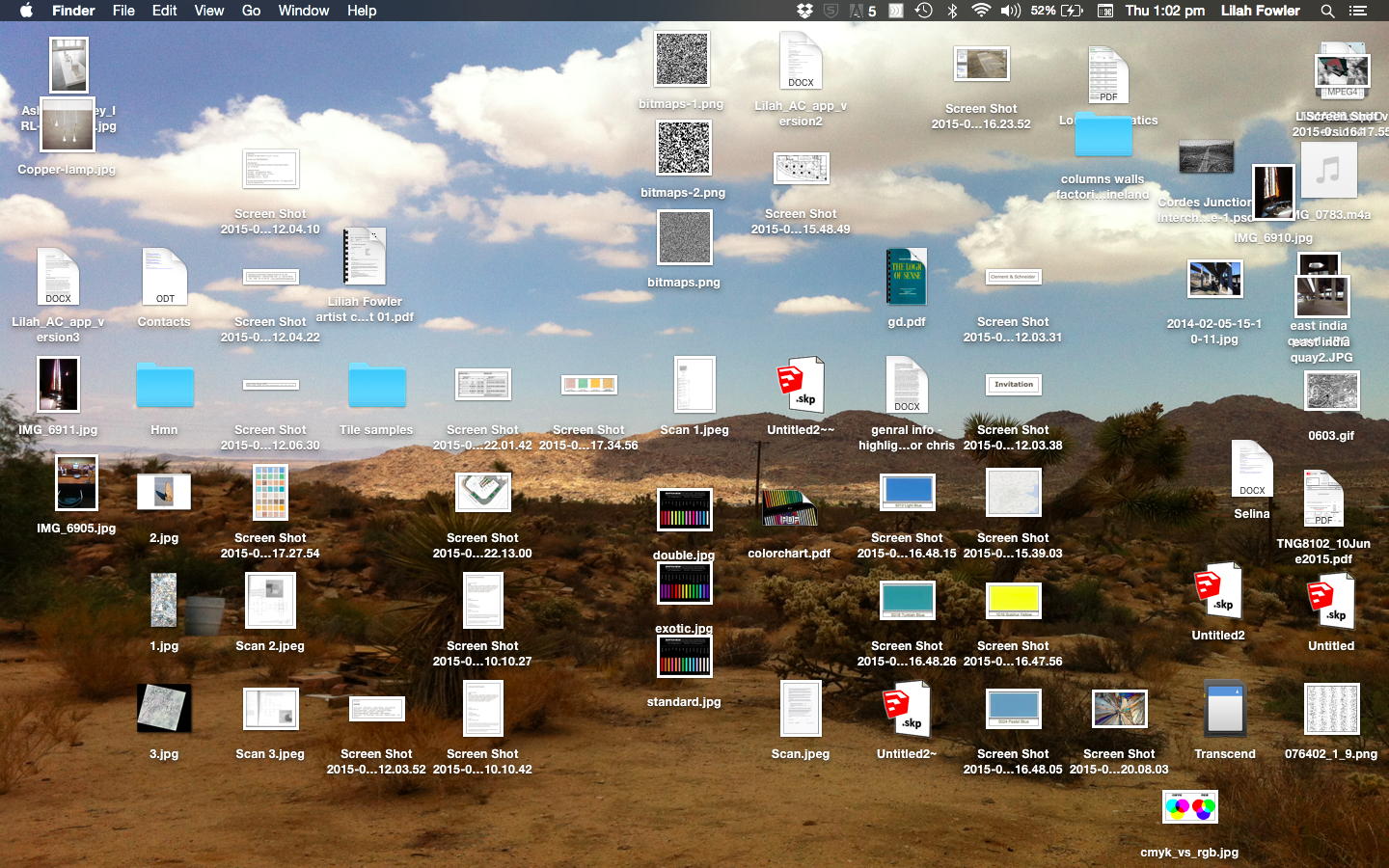