Human Inside: MacKeeper and other Familiar Objects of Vulnerable Spaces
By Text by Arjun Srivatsa; artworks by Eltons Kūns, Giselle Zatonyl, LaTurbo Avedon 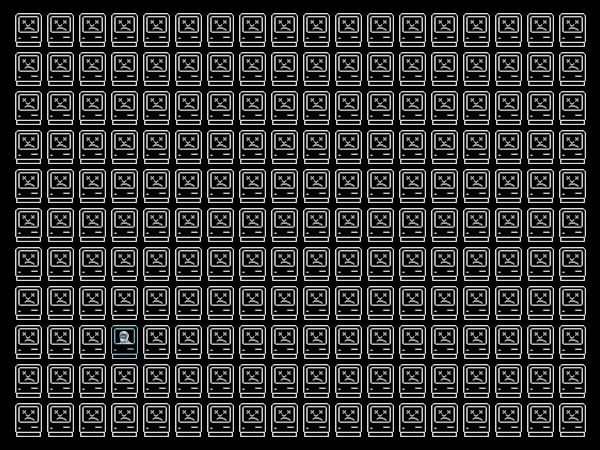 Inspired by the advertising strategy of MacKeeper, a security and maintenance utility that promotes its product in the most insecure areas of the web, I invited three artists—LaTurbo Avedon, Eltons Kūns and Giselle Zatonyl—to join me in making works that respond to the experience of encountering malicious objects in vulnerable spaces. The works and my curatorial statement are below.

The second result listed on Google when searching "MacKeeper" is MacKeeper.com, a site that sells a product named MacKeeper. The first result, however, is an Apple Discussions thread entitled "Do not install MacKeeper."

Apple users consistently criticize the cleaning, security, and optimization utility, claiming that it is a virus in the guise of antivirus software. Forums on Mac blogs feature long threads of horror stories[1] about the utility’s user experience, often stating that once downloaded, MacKeeper irrevocably slows down computers, forcing users to reformat their drives. Former PR Director Jeremiah Fowler said that his product and their robot logo became a "forum punching bag"[2] due to a black PR campaign run by an aggressive competitor. However, as years pass, MacKeeper’s bad reputation continues to develop as new critiques are published, painting the product as a malicious paywall scheme that enslaves users in a never-ending upgrade cycle.

The company maintains that its product is reputable and has no intention to harm. "MacKeeper is not malware," says Bob Diachenko, Senior PR Expert for the company. "There are no ways that the program itself can harm or de-stabilize your system as described by some sources. It is just the nature of the business in the age of internet trolling. It is so easy for anyone with too much time on their hands to trash businesses or products online anonymously with no repercussions."

But beyond criticism of the program’s user experience, MacKeeper's negative reputation is heavily influenced by the online space in which their advertisements appear.

Users are often confronted by MacKeeper’s robot mascot while visiting areas of the web in which they are vulnerable, such as porn, torrents, and illegal streams. In most instances, the company’s nearest advertising neighbors are clearly spam sites attempting to offer the user some sort of instant reward, whether it be sexual ("Pharmaceutical Companies Hate Him," "DTF Singles In Your Area") or economic ("Congratulations! You've won a free iPad!"). Users recognize these manipulative objects as threats that feed off insecurity and inexperience. A common user understands what lies beneath the click on messages of "weird tricks," knowing that simply engaging in illegal activity places them in vulnerable states of surfing. Therefore, the practice of managing these advertisements has become somewhat of a reflex. When one clicks on a link to a torrent or a pornographic video, it is in the user’s best interest to exit peripheral windows, perform the intended task and leave without engaging with potential threats. By simply existing in the vicinity of vulnerable surfing, MacKeeper’s online presence is indelibly linked to a negative user experience.

The visual design of the mascot heightens this incongruity: MacKeeper (also the name of the robot) is a floating, muscular torso-shaped 3D-animated robot with glowing blue eyes. A subtle flatness at the base of the robot's eyes represent raised cheekbones, adding a sense of playful enthusiasm to its character. In fact, this playfulness is an important facet of the robot's personality, despite its often unsavory surroundings. The company jokingly states that they like to pretend that their Facebook community is actually moderated by the robot. Diachenko explains that despite the fact that their mascot is "non-human" by nature, the company is "constantly humanizing [their] robot. He has a soul."

Humanizing has become a modus operandi for the MacKeeper brand. When acquired by the German company Kromtech Alliance in 2013, the service adopted the catchphrase Human Inside and began marketing their 24/7 real-time customer support feature MacKeeper.com has recently been updated to display portraits of the management team. Furthermore, at the top of their menu, above the product’s obvious services of Cleaning, Security, Data Control & Privacy is their Customer Service link, simply entitled "Human." This effort to characterize their product as a friendly bodyguard is a part of MacKeeper’s attempt to prove that they care about the customer.

Yet it's puzzling that a company that claims legitimacy and promises security chooses to engage in such a poorly regarded advertising practice. According to Diachenko, the company is one of the largest buyers of ad traffic that targets the Mac OS operating system. MacKeeper purchases blocks of traffic from major ad networks and has no control over where the ads appear or how many times they are shown. In his eyes, the prevalence of MacKeeper is subject to the nature of online advertising. Diachenko believes that "We are all tied together in some strange marriage of dependence between advertisers, ad networks and websites that display the ads." But where does this place the user? Are we presumed to be a the bastard child leftovers of this broken relationship?  MacKeeper is putting a lot of effort into rebranding itself to seem more humanized, but their ads still run in seedy corners of the web, and it might be in their best interest to gain control of their visibility.

MacKeeper is not a virus. It is a company that has received high praise from computer publications (Macworld magazine calls it "a gem"[3]) and runs booths at major tech conferences like as International CES. The company claims to have a big audience of dedicated fans who stop by their convention booths to say hello and find out about what MacKeeper plans for the future. They are proud of their following. However, what is clear to outsiders is that MacKeeper’s online presence is almost irreversibly tied to the vulnerable spaces in which it advertises. And although their robot is trying to pose as an antidote floating in a sea of viruses, its presence comes off as ingenuine, and users will forever be wary of clicking.

"Is MacKeeper a SCAM?" by MacKeeper

Is Your Mac Slow?