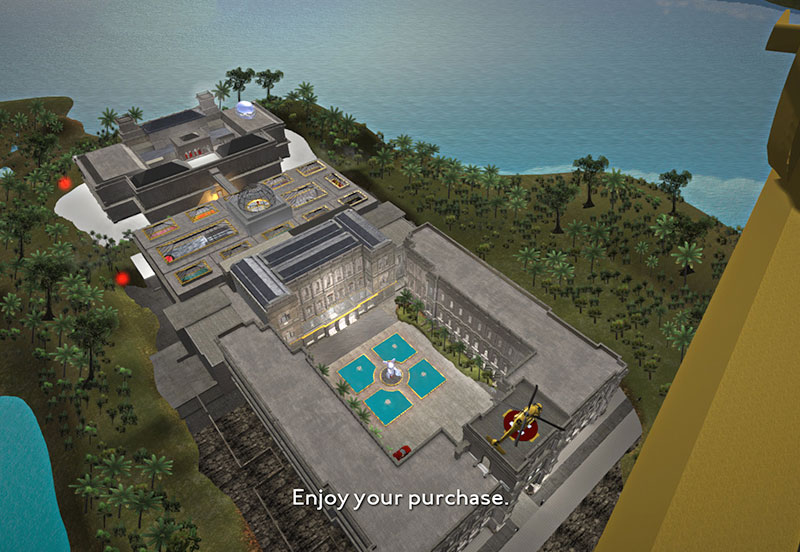 Wealth is monolithic: it refutes argument, pointed criticism, direct gaze. The architecture of today's wealth is monolithic, as well: a crucial expression of modern oligarchies' centralized power. Where the estate once served as a neat symbol of riches, our edifices are more diverse and inventive. They are built heavy and tall, as rebuff. They have to symbolize abstract figures, tens of billions of dollars on paper.

Artist Lawrence Lek offers us entry into the monolith in his work Unreal Estate. In it, we, the viewers, are the new billionaire owner of the Royal Academy of Arts in London. To recreate a virtual Royal Academy out of surveyor's drawings, Lek used Maya and Unity, graphics software used in both video game environmental modeling and level design, and in architectural practice as a rendering tool for visualizing elaborate structures. Unreal Estate is the ninth level in Lek's Bonus Levels series; Lek created Bonus Levels as nine "utopian fiction" iterations of different sites in London. ("Bonus levels" are secret, productive, freeform sections in a video game in which the game's rules are suspended.)

In the film for Unreal Estate, a voiceover reads a training manual by the real daughter of a Russian oligarch named Maria Baibakova. The guide prescribes how to run a household of servants like a corporation. Her tract was widely mocked, and to hilarious effect. In Unreal Estate, Baibakova's text is reworked, here recited in Mandarin by Joni Zhu. The future is for sale to the highest bidder, and it will continue to be. The real Royal Academy is on a lease contract; London's housing crisis, like that in New York City, is largely caused by the ultra-wealthy inflating values by buying up property they barely live in.

Lawrence Lek, Unreal Estate (the Royal Academy is yours) (2015)

A commercial real estate investor's white flag greets us as I enter the main courtyard: Jones Lang LaSalle: Real Value in a Changing World. The voiceover congratulates me: my bid for Burlington House and 6 Burlington Gardens has been successful. I float on towards a Jeff Koons bunny, cradling, in its left steel arm, a painter's easel: Koons is always good for a solid grotesque reflecting us back to ourselves. All the iconic, massive art brought here is first valued for the cultural capital it represents.

This Royal Academy is, further, reconstructed on a surreal private island. Helicopters clip across the sky, and I am blinded intermittently by the hot pink flashes of a laser alarm system perimeter. Threading through is an exquisite score by Oliver Coates, with cello that swells and retreats as my gaze floats over the uncanny prints and décor of each room, the marble, the CCTV monitors. There is talk of panic rooms.

I had a long conversation with Lek about his work over Skype. He was in his studio in London, sitting before a poster of Rorschach inkblot tests. Lek trained and worked as an architect, and so he deploys its language with ease. He posits his critical game worlds as "three-dimensional essays," inspired by Chris Marker and Harun Farocki's essayistic films. This is, he argues, "simulation as institutional critique."

What is the thesis, then, of this simulation essay? Lek is attempting several highly ambitious projects at once here, among them the gamification of our world to reveal its rules, and a steady critique of art's live-in relationship with banking. He demonstrates how capitalism reproduces itself through spectacular edifices, how it squashes social critique by submitting the mind to awe. The museum enshrines the market's choices of cultural winners.

By placing his viewers, who with all statistical likelihood are mostly not billionaires, in the shoes of one, Lek also plays on the neoliberal ethic of extreme self-sufficiency. Perhaps, we think, if we work unimaginably hard, everything is attainable: land, culture, one of the most respected museums in the world. Through this fantasy of disembodied ownership, the viewer is forced to contend with whether she believes in it in real life. Interestingly, Unreal Estate was shown in the Royal Academy itself. Viewers remarked that they had a new feel for the familiar interior after having experienced the space as "owners."

I listen to instructions on how to manage my "army of servants": the drivers, nannies, maintenance workers, cooks and butlers. The score turns dark and bittersweet as we move down into the vaults. I have to wear a heavy mantle of responsibility to keep my family legacy and dominion intact. My workers will sign confidentiality agreements. I will only hire legally, and all relations must be kept above board. And I have to resist treating maids like "sweet but poor relatives," the monologue continues; it is best to not show anger, as we must only "express our strongest emotions to our equals."

My walk through Unreal Estate is a journey inward. This is the purpose of deploying a first-person, meditative, role-playing experience. I am invited to meditate on my own relationship to the space. I walk deeper into the museum, past gold-leafed borders, up columned stairs. I hear: To become master of your home, you must define its mission. What mission would I give a home this grand?

This virtual Royal Academy, as metonymy of the art world, makes me acutely aware of how successive historical articulations of power and desire can converge in one space. The building, in this context, makes the fantasy of total ownership and real prestige both accessible and understandable. And what, I think, looking up at these totalizing facades, is wrong with desiring protection?  The precariat of earlier ages used his pluck, endurance, and resilience to rise up from the dusty streets into the lit, rolling gardens of the aristocracy. Today's white collar office worker, though a little less smudged and hungry than Pip, still lives in an unsure world. He dreams of security, of safety, of continuity.

Though the simulation and dislocation in Unreal Estate should allow the space to be more fluid and plastic, it is interesting that the systems and symbols of great power are replicated again on the island. The logic and language of titanic ownership inspire potent longing. Wealth is, as ever, anything but just wealth: it is controlling desire, it is channeling anxiety into taste, it is the promise of protecting and supporting future generations.

In the final minutes of the film, I watch the sunlight cut thick gold lines across a smaller, seemingly gold model of the Royal Academy, kept on a dais, in a hall lined with thick maroon carpet. Then, I am up on the roof. I skip past Anish Kapoor's Cloud Gate to the helipad. I feel deeply settled as the helicopter lifts up over my property; I survey my new estate for the first time. I think of my banker friends breaking out champagne to laugh at thousands of protesters from the balcony of their investment firm. I think of a young monarch assuming her duty, frozen into the image of the Virgin Queen at the end of the film Elizabeth.

Below, the glass ceilings of the gallery rooms, about fourteen in total, glitter in their gold and stone settings. I see rubies, emeralds, sapphires, diamonds, all ensconced, like jewels set in the lid of a tomb.

A wonderful project but using Maya and Unity rather than e.g. Blender and WebGL or Ogre (or OpenSim, or…) then releasing the artwork as a video rather than as freely licensed assets reproduces some of the power structures and strategies that are otherwise under critique.

I've also just been re-reading the section on documentary video from "The Electronic Disturbance". I'm not sure how this work relate to that (does it avoid or intensify the historical failings of documentary video?) but it definitely does.

Thanks Rob, to clarify, the video embedded itself isn't the final artwork itself but rather is the documentation of the exhibition at the RA itself. Actually most of the Bonus Levels series are available to download as standalone applications on the site (www.bonuslevels.net).

So the artworks themselves - if not the component parts to construct it - are shared. And yes - there are always greater degrees of openness that works like this could move towards, both in terms of production (program used) and dissemination.

RE: "The Electronic Disturbance" isn't something I'm very familiar with but Zach Blas had mentioned to me how important the section on 'Utopian Plagiarism' was for him.

I like this part from the documentary section:
"…cultivated for pleasure
as well as from necessity"