In 2003, the Blaster Worm was a formidable security breach. A blended threat, rolling bad code into elements of various viruses and worms, it moved swift and ruthless across four hundred thousand Microsoft computers within two weeks.

For his record Blaster, released last month on the Berlin-based label PAN, artist James Hoff used the Blaster computer virus to warp beats from the 808 drum machine into a fungal aural mass.

Disrupting an image, a sound, or a form with "bad data" is a common technique in glitch art: introduce a grain of sand into the system and let it run. But a virus is not just poor data, but malicious code: a language of pointed attack.

Whether that code is genetic or digital, the virus circulates through the population, seeking hosts and propagating itself. In Hoff's own words, in an interview in the most recent BOMB magazine: "[T]raditional illnesses, computer viruses travel through networks of communication or trade, meaning that they can be mapped and rendered graphically across set geographies." A visual representation of the virus' action can be seen on the cover of that issue, in Hoff's artwork Stuxnet No. 2, which was created by infecting a monochromatic image with the eponymous worm to generate a candy-colored, Richter-esque abstraction. Monochromes and readymade beats stand in for human populations and computer networks, allowing the virus' effects to be seen and heard. 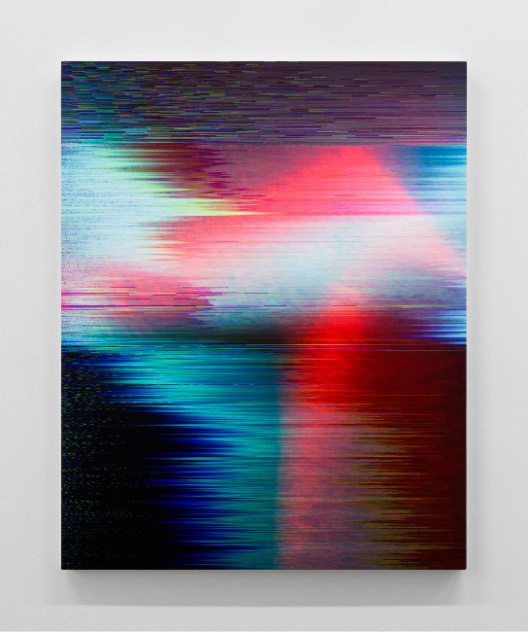 Hackers create viruses for crazed fun, for political causes, and to gain new insight into the workings of computer networks. In the latter case, viral infection is a form of play with systems that exposes their vulnerabilities and leads to further reinforcement. The use of a virus to attack the system gives rise to stronger defenses; tension and flux create a more stable whole.

Viruses also spark riots, de-stabilize. Riots in the 1980s, in the cold, blind panic of the AIDS epidemic, infecting the marginalized. Think of Patrick and Sylvester Cowley, of abjection followed by a coherent, cauterizing rage as the psychic reality of disease sets in. Riots in Liberia today, as a new epidemic takes hold against a backdrop of government inaction.

Artist Joseph Nechvatal described the "blending of computational virtual space with ordinary viewable space" as the "viractual realm." Such a blending of corporeal experience and computational space can be seen in Hoff's virus-derived works, and it lends them a certain insidiousness. Each track on Blaster is an immersive, full-body assault, playing on a fear of explosive violence to come, a wall of thick, stabbing noises cloaking and suffocating the listener. The end sensation of these contaminated tracks is intrusion. Infected sounds sharp as a pin, dragged across the paper-thin skin of the eardrum, seeking out the weakest point for entry.